Giant glow-in-the-dark shark that uses bioluminescence as a camouflage to attack prey is found living nearly 1,000-feet below the surface off the coast of New Zealand

By Stacy Liberatore For Dailymail.com

There are a number of deep sea creatures that glow-in-the-dark, but a team studying marine life have the first ‘giant luminous shark.’

Researchers spotted the kitefun shark off the eastern coast of New Zealand during a survey last year, along with two others – a blackbelly lanternshark and southern lanternshark, which also posses bioluminescence.

All three of the unique creatures live in an area of the ocean called the ‘twilight zone,’ which stretches 3,200 feet below sea level and out of reach of light.

The study suggests that due living in a region without light, there is no place for the sharks to hide and they use their glowing bodies as a camouflage – they appear backlit against the bright surface of the water. 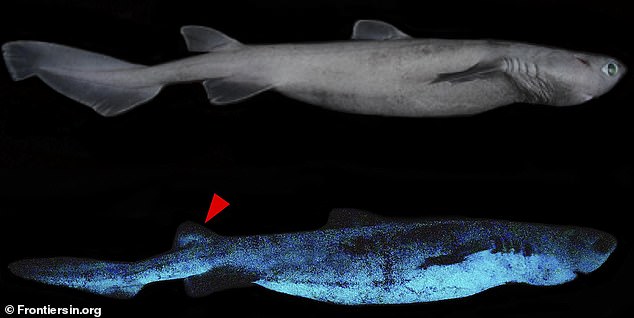 There are a number of deep sea creatures that glow-in-the-dark, but a team studying marine life have the first ‘giant luminous shark.’ Researchers spotted the kitefun shark off the eastern coast of New Zealand during a survey last year

The study, published in the Frontiers in Marine Science journal, was conducted by researchers from Belgium and New Zealand, who made the discoveries in January 2020 and published their findings February 26.

The species were collected from the Chatham Rise, which is an area of ocean floor east of New Zealand.

And although the species are known in the science community, this is the first time the phenomenon of bioluminescence has been observed in them.

This phenomenon, also called ‘living light’ or ‘cold light,’ is sparked by a chemical reaction in a fish that contains the molecule luciferin that produce slight when it reacts with light.

‘Bioluminescence has often been seen as a spectacular yet uncommon event at sea but considering the vastness of the deep sea and the occurrence of luminous organisms in this zone, it is now more and more obvious that producing light at depth must play an important role structuring the biggest ecosystem on our planet,’ researchers shared in the published study.

‘This first experimental study of three luminous shark species from New Zealand provides an insight into the diversity of shark bioluminescence and highlights the need for more research to help understand these unusual deep-sea inhabitants: the glowing sharks.’

The study focused mostly on the kitefin shark, as researchers were perplexed why the large vertebrate would have illuminating abilities.

They found that although it has few predators, the kitefin shark has one of the slowest cruising speeds measure in sharks that suggests it ‘possesses a high burst capability.’ 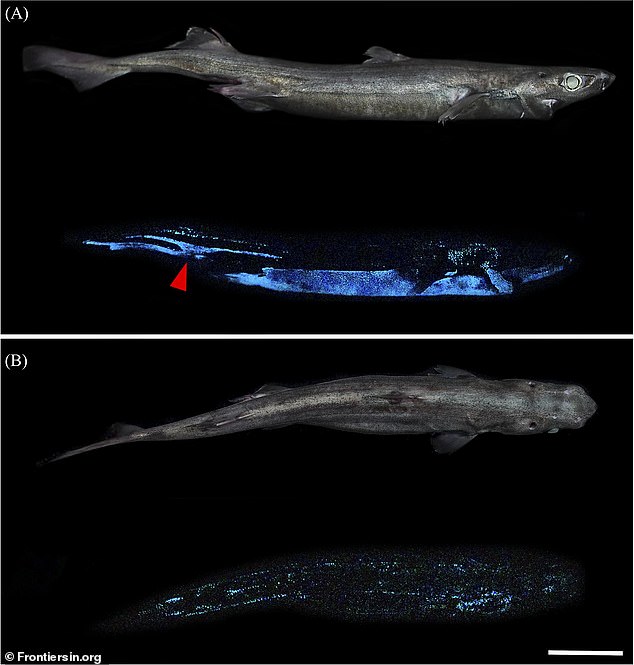 After analyzing the stomach contents of a specimen, the team found it typically feeds on the smaller lantern sharks that have faster swimming speeds.

Knowing this, the team hypothesis that the kitefin shark uses the luminescence to light of the ocean floor while searching and hunting prey, along with allowing it to attack in stealth mode.