Parisians thronged the streets of the French capital at the weekend to enjoy the spring sunshine despite the city being plunged back into strict lockdown measures.

Prime Minister Jean Castex last week told people in Paris, Lyon and Nice to stay inside unless absolutely necessary with all non-essential shops closed in an attempt to slow down a third wave of Covid.

But he was undermined by Emmanuel Macron who insisted on Friday that people were allowed to go outside and socialise and dismissed talk of ‘lockdown’ – saying it was not the right term to describe the new measures.

That prompted scenes of packed promenades and parks in Paris over the weekend which experts warned would send case rates soaring, with one declaring that France has ‘lost the battle’ against the virus.

And in the southern city of Marseille, an estimated 6,500 people gathered for a lockdown-breaching street carnival with participants saying they are fed up with restrictions – more than a year after they were first imposed. 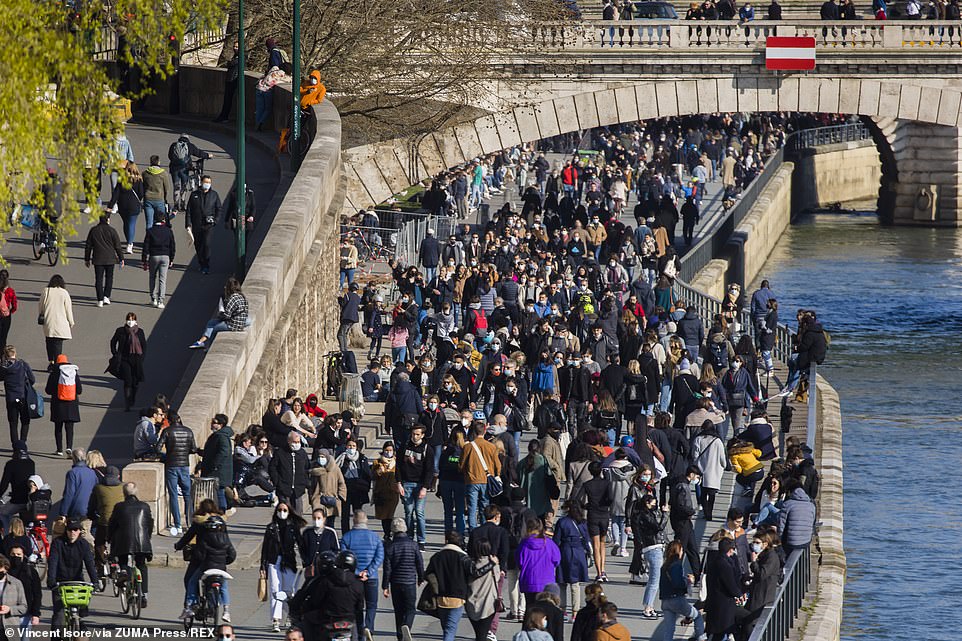 Paris’s promenades and parks were packed with people enjoying the spring sunshine at the weekend, despite new lockdown measures in the city barring people from going outside unless for an essential reason 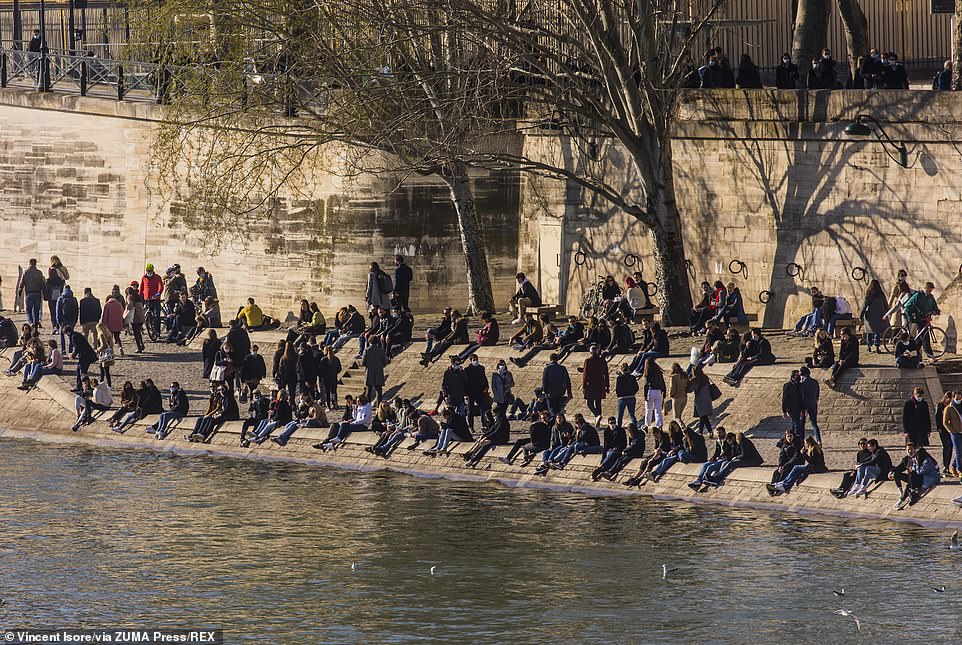 Groups of people sat along the Seine and soaked up the sun, leading experts to warn that the country has ‘lost the battle’ with coroanvirus and will see cases and deaths soar 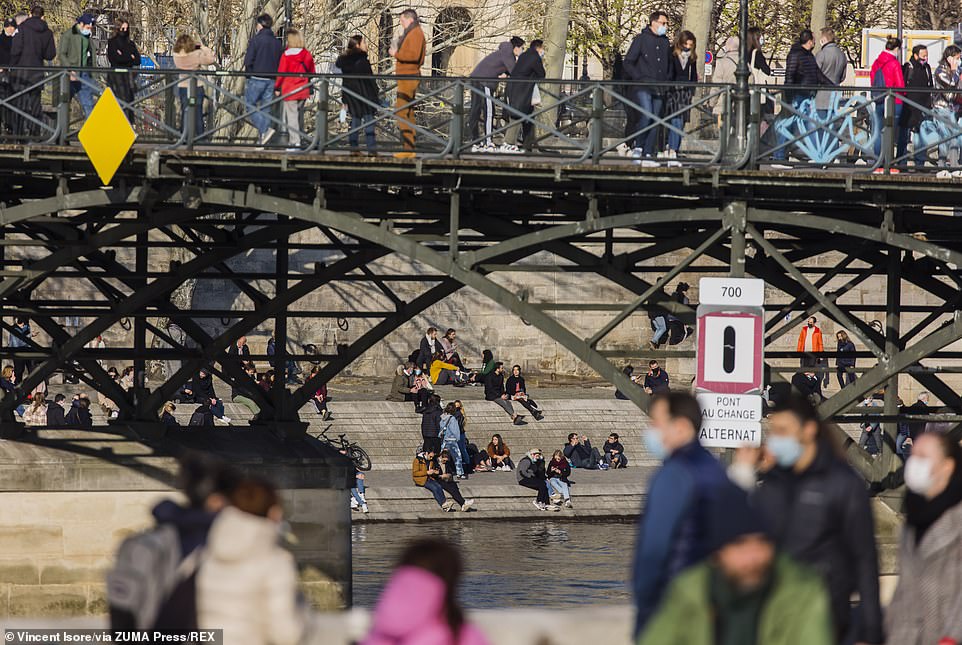 The packed streets came after Emmanuel Macron undermined his own Prime Minister by insisting that the new rules do allow people to socialise outdoors, with the President denying it amounts to another ‘lockdown’ 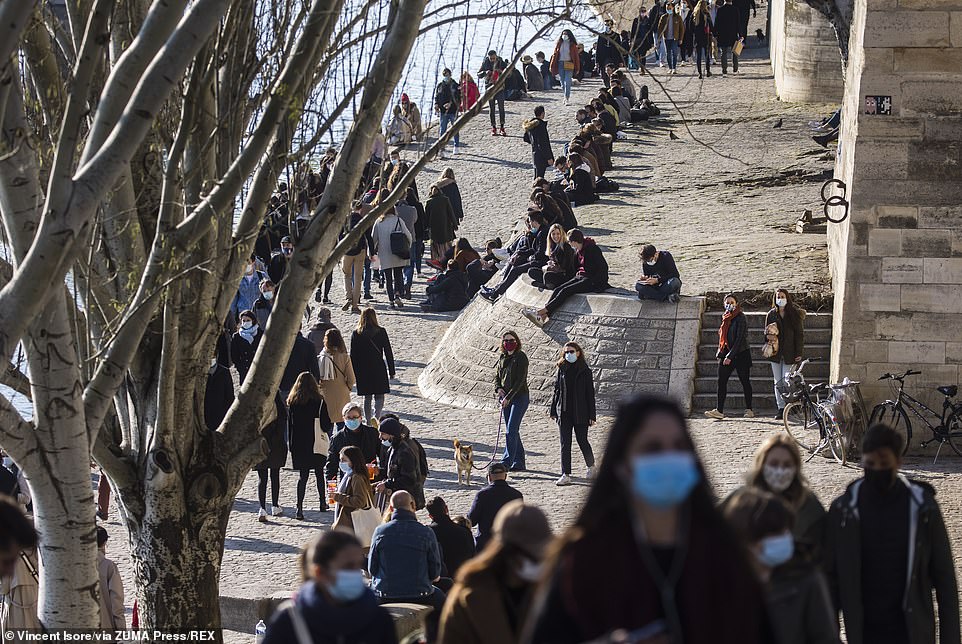 Paris is bearing the brunt of a new wave of coronavirus infections in France, with intensive care units in the city’s hospitals already full to overflowing with experts predicting more cases

But it was not just members of the public attacking and defying France’s new lockdown. The measures were also blasted by experts and journalists for being ‘messy’ and not going far enough to protect people.

A travel authorization certificate posted online was so ridiculed by French media for its unnecessary complexity that the Interior Ministry scrapped it within hours. For now, simple proof of residence is required to stroll within a six mile radius.

The form the French government still obliges citizens to fill out to travel greater distances 18 miles also was not accessible online because of a technical glitch. A website Sunday simply said, ‘Available soon.’

Under the new restrictions, nonessential shops were closed but people are not required to spend most of the day confined at home. The government announced the measures on Thursday as the coronavirus picked up speed again in some parts of France.

The country reported 35,327 new confirmed cases on Saturday, when the number of COVID-19 patients in French intensive care units rose to 4,353, the most so far this year, the Health Ministry reported.

‘When you look at the numbers, they’re unsustainable, and it is going to become ever-harder as the virus continues to circulate,’ Anaelle Aeschliman, a nurse at the Ambroise Pare clinic in the western Paris suburb of Neuilly-sur-Seine, told The Associated Press. ‘I admit I was a bit disappointed that we aren’t being locked down nationwide.’ 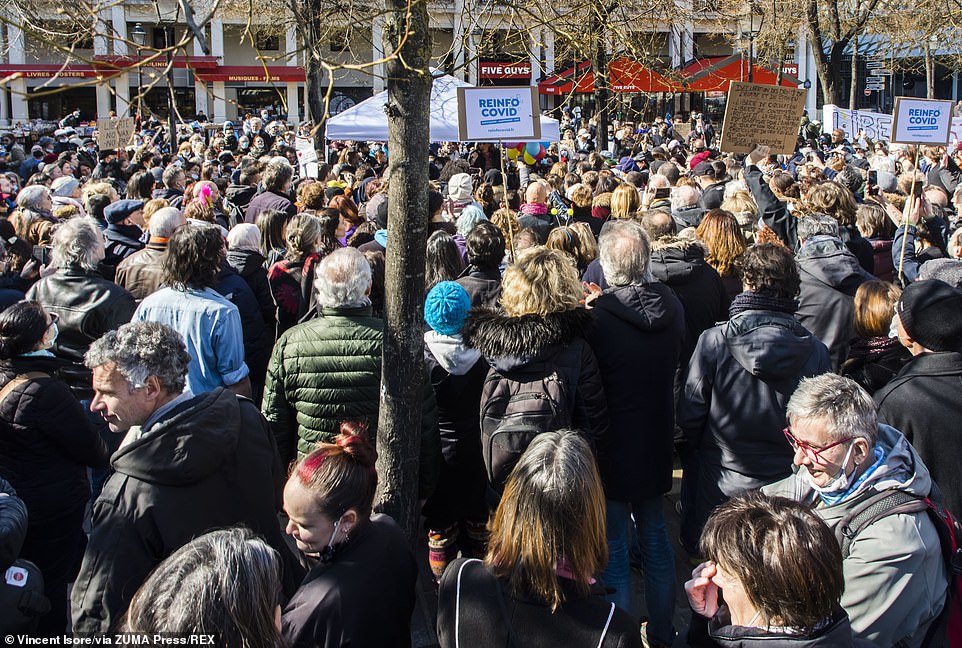 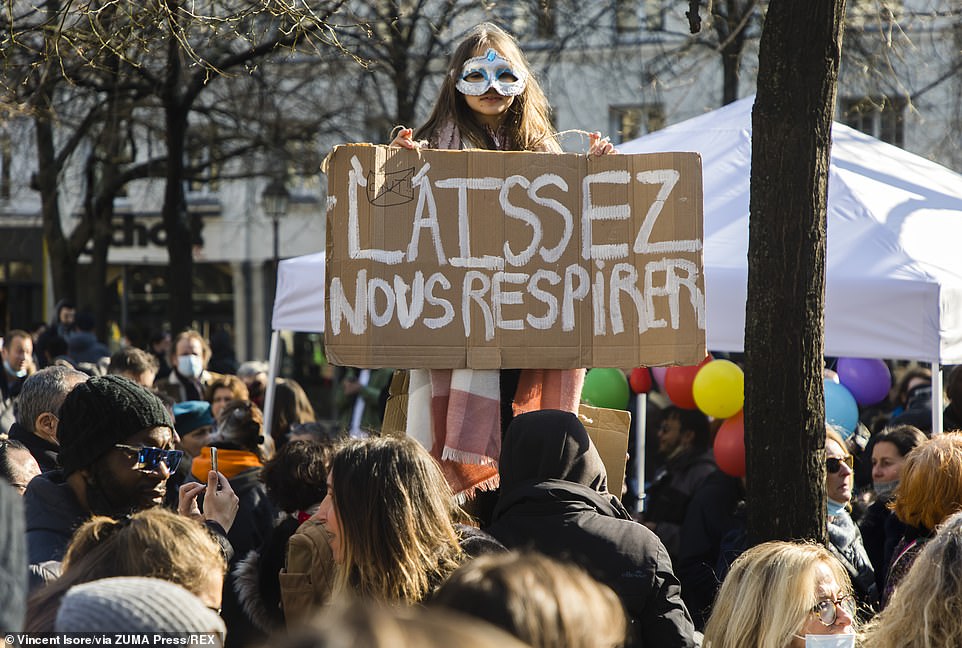 Protests in Paris were mirrored by those in Germany, Holland, Austria, Bulgaria, Switzerland, Serbia and Poland at the weekend as Europeans grow tired of lockdown measures 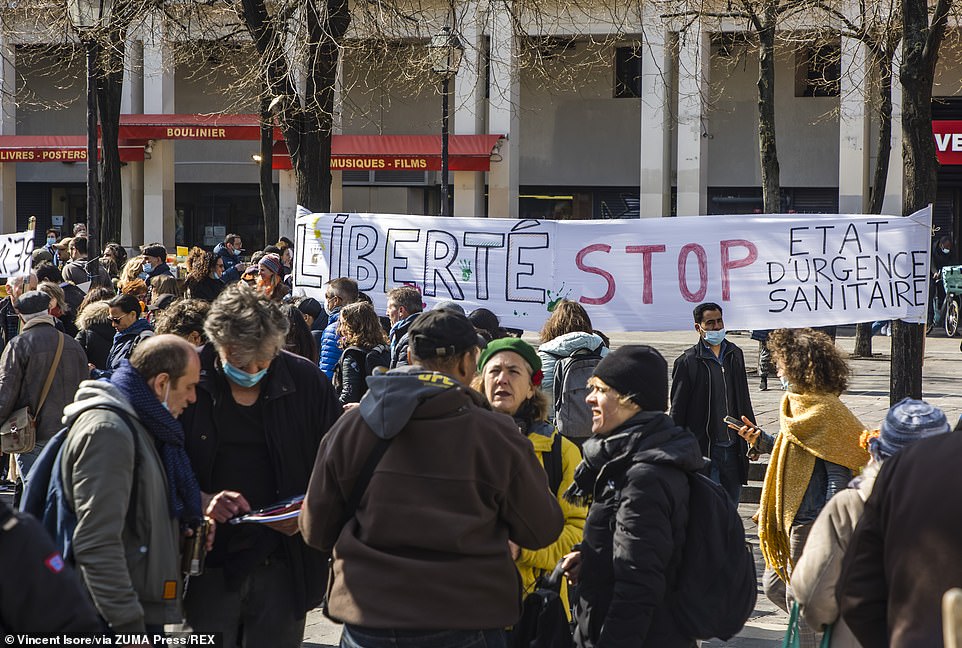 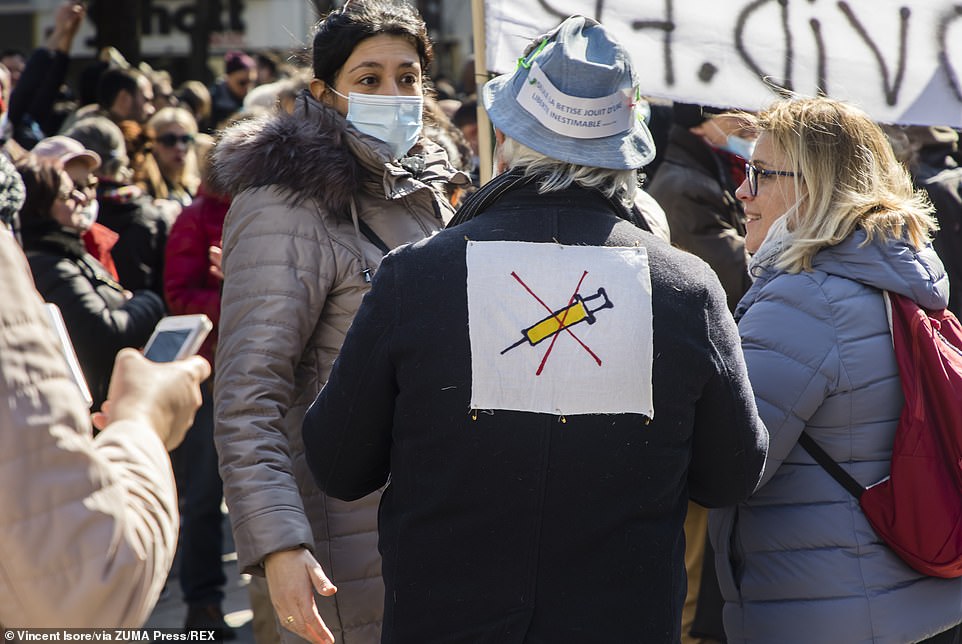 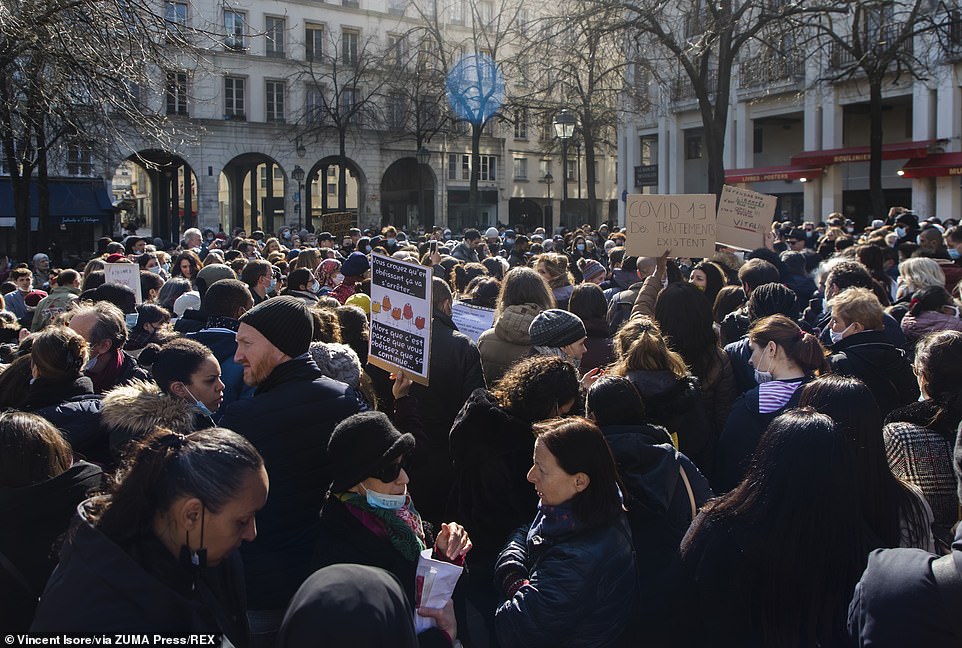 French people take part in an anti-lockdown rally in Paris on Saturday, after the city was thrown back into harsh measures

‘There is a lag between the gravity of the situation, and the rules that have been adopted,’ said Professor Dab, adding that there had been ‘a divorce with science’.

He was particularly critical of half-hearted lockdowns, conflicting advice about vaccines, and the lack of a coherent test-and-trace programme.

Professor Dab told the BFM news channel that ‘we can perhaps put the brakes on it a bit, but the epidemiological situation will not improve with the measures that have been taken.’

He added: ‘Frankly the impression I get is that the that the battle against the contamination is lost.’

Referring to Jean Castex, the most senior politician in France after President Emmanuel Macron, Professor Dab said: ‘Moreover, I note that the Prime Minister has not made any reference to the test strategy, to tracing, it’s because of this that the battle has been lost.’

Professor Dab who was in charge of France’s public health for two years up until 2005, said: ‘The only way we can now slow down the pandemic is to vaccinate more people.’

More than 30,000 new infections a day are currently being reported as France, despite pledges by President Macron to get the daily figure down to 5000.

With more than 4000 people in intensive care at the weekend, medics in greater Paris have been forced to evacuate patients to less busy hospitals in other parts of the country. 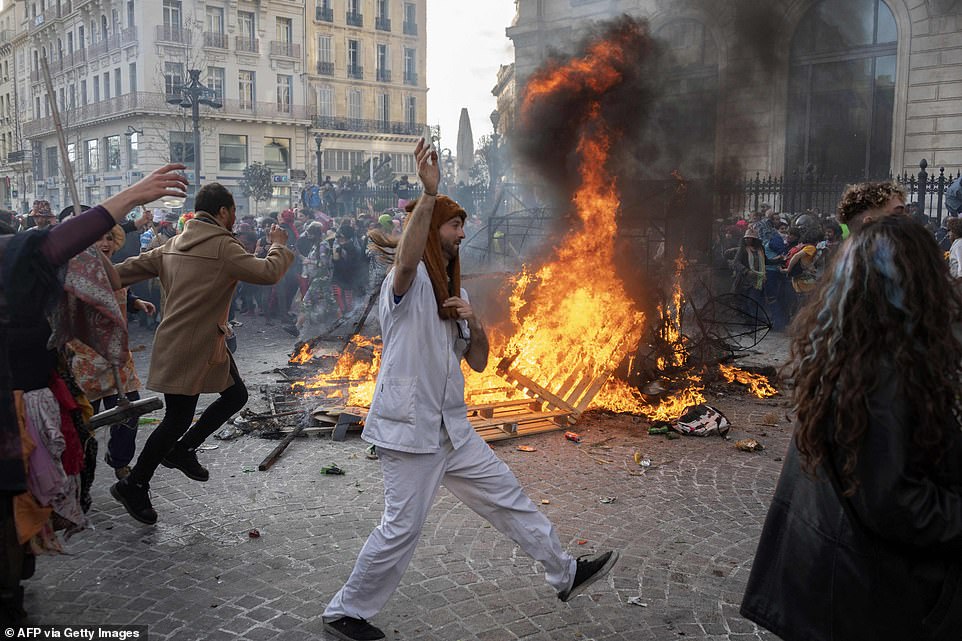 6,500 people also took part in a mass rally in the city of Marseille on Sunday that had to be broken up by police 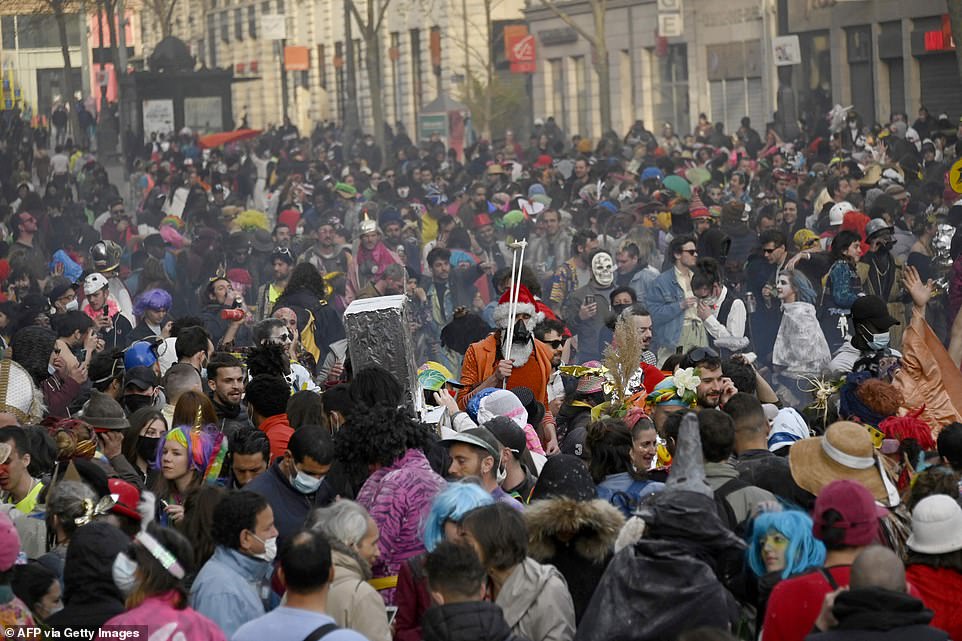 Thousands of largely maskless younger people attended the street carnival, saying they were fed up with lockdown rules that have blighted their lives in recent months 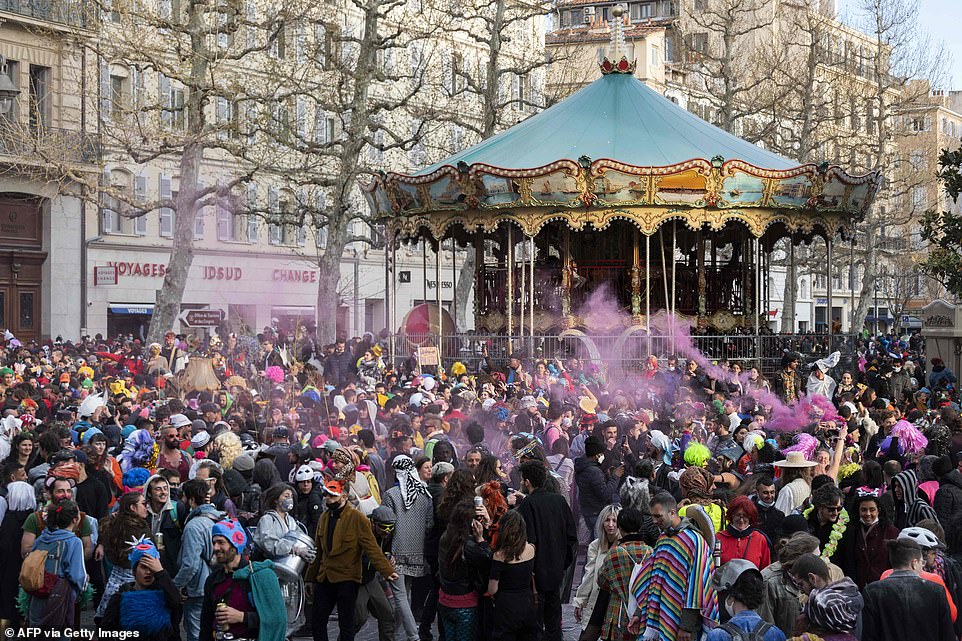