Two former British military chiefs today warned China and Russia will not be worried by the UK’s new defence shake-up as they said troop cuts will mean the Armed Forces are ‘less able to deploy to conflicts at scale’.

Lord Richards and Lord Houghton, who both served as chief of the defence staff in the 2010s, expressed concerns about the Government’s modernisation plans and wider defence and security strategy.

Lord Richards, who held the role between 2010 and 2013, said cuts included in the Command Paper will leave the UK with a ‘much smaller conventional force’ while a reduction in the number of aircraft is ‘worrying’.

Lord Houghton, who held the role between 2013 and 2016, said cuts would mean ‘reducing down to a sort of one-shot, quite long notice, not long sustainment set of armed forces’.

He said the cuts, which include reducing the size of the British Army by 10,000 by 2025, will result in the UK being ‘less able to deploy to conflicts at scale’.

The document was published one week after the Government released its overarching Integrated Review on foreign policy and security.

The Defence Secretary faced an immediate backlash as he confirmed the cut to the British Army and claimed new technology means ‘greater effect can be delivered by fewer people’. 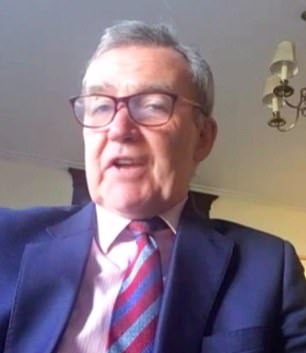 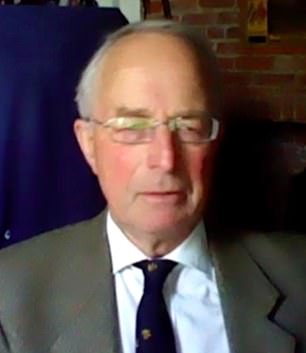 Lord Houghton (pictured left) and Lord Richards (pictured right), who both served as chief of the defence staff in the 2010s, expressed concerns about the Government’s modernisation plans and wider defence and security strategy 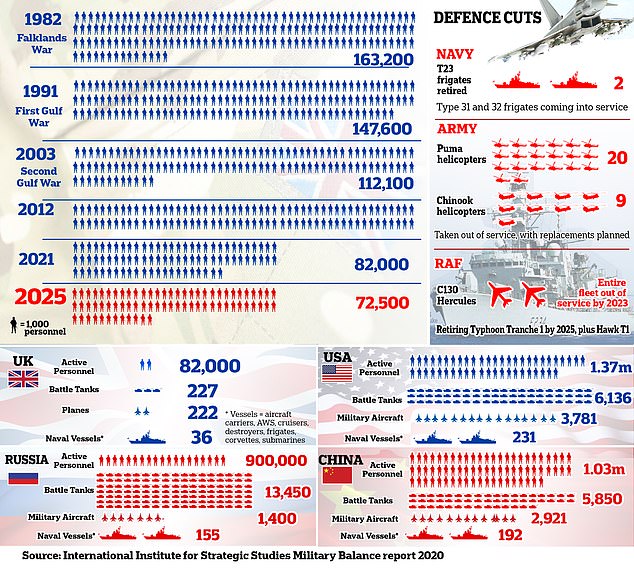 Both China and Russia are highlighted in the Integrated Review as threats to the UK.

But Lord Richards said neither country will be worried about the shake-up unveiled by Mr Wallace yesterday.

Asked if the countries will be concerned by what they read and whether the changes could prompt a change in behaviour, he told the Defence Select Committee: ‘I don’t think China will.

‘Listening as best I can to friends of mine in the Far East to what they think of the [aircraft] carrier deployment, they are not worried about that in the slightest.

‘And I suppose… to me that poses risk without great strategic advantage. I would have preferred us to focus much more unequivocally on the Euro/Atlantic area, both in our maritime and land and air forces, freeing up American assets if necessary to focus on China on our collective behalf.

‘I certainly don’t think Russia is going to be worried by what we are doing. It’ll see that… we are going to have a much smaller conventional force.

‘As I have said elsewhere, it could suddenly be an asymmetric attraction to those countries with very large armed forces to use those in a more traditional way while we neuter each other in the more sort of high tech areas.’

The Command Paper signals a significant shift in the UK’s approach to defence, with ministers investing billions of pounds in the technology of the future while retiring some of the nation’s ageing aircraft and armoured vehicles, including the first tranche of Typhoon fighter jets by 2025.

The RAF will lose a total of 114 manned aircraft as a slew of fighters, transport aircraft and helicopters will be phased out.

But at least £6.6billion will be spent on research and development over the next four years to come up with ‘next generation capabilities’ which will include ‘directed energy weapons and swarming drones’.

More than £2billion will be invested over the next four years in the Future Combat Air System which is expected to deliver a mix of manned, unmanned and autonomous aircraft.

He said: ‘We appear to be reducing down to a sort of one-shot, quite long notice, not long sustainment set of armed forces.

‘You have got to be sort of specific to contexts and scenarios to say could we do that, couldn’t we do that.

‘But I think it is one of the things that it looks like the result of this review in terms of the numbers that have been reduced in terms of straightforward platforms and boots on ground, that we are less able to deploy to conflicts at scale.’

On the issue of reduced aircraft numbers, Lord Richards added: ‘As far as the air is concerned, obviously the reduction in planned numbers of aircraft is worrying.

‘The attrition rate of aircraft in war, proper war, high intensity conflict, can be considerable.’ 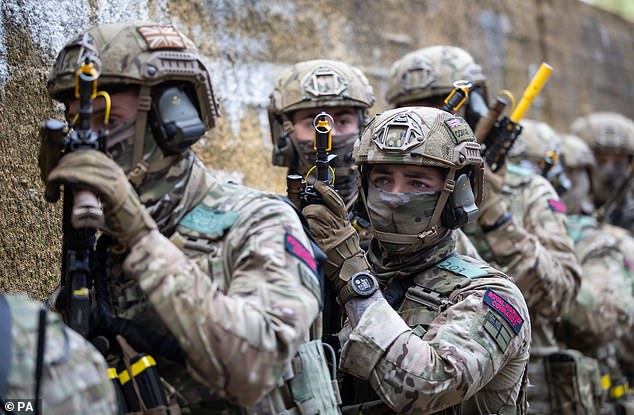 Mr Wallace yesterday hit out at critics for playing ‘top trumps’ over military numbers amid widespread criticism of the decision to reduce the size of the Army from 82,000 to 72,500.

He said that ‘as the threat changes, we must change with it’ as he set out the Government’s plans for a major overhaul of the Armed Forces which is designed to ensure it is ‘truly threat-oriented’.

Mr Wallace said: ‘The army’s increased deployability and technological advantage will mean that greater effect can be delivered by fewer people.

‘I have therefore taken the decision to reduce the size of the Army from today’s current strength of 76,500 trained personnel to 72,500 by 2025.

‘The Army has not been at its established strength of 82,000 since the middle of the last decade. These changes will not require redundancies.’