Terrifying footage has emerged of the moment a speeding car hurtled through traffic on the Sydney Harbour Bridge before smashing head-on into another cat that burst into flames.

Three cars were wrecked in the crash at 7.06am on Monday, sending three people to hospital including one in a serious but stable condition, and paralysing Sydney with gridlock traffic.

Dashcam footage shows a Toyota Kluger SUV suddenly speed past other cars and change lanes directly into the path of another car, which it swerved to avoid.

However, the attempt to dodge the first car just led to it crossing into oncoming traffic and slamming head on into a van coming the other way, with a third car hit by the ricochet. 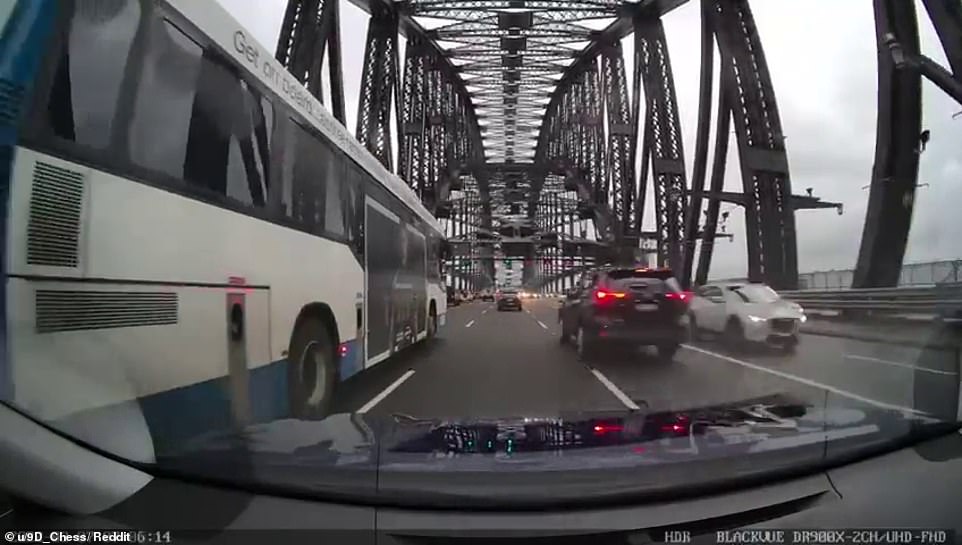 Dashcam footage shows a Toyota Kluger SUV suddenly speed past other cars and change lanes directly into the path of another car, which it swerved to avoid 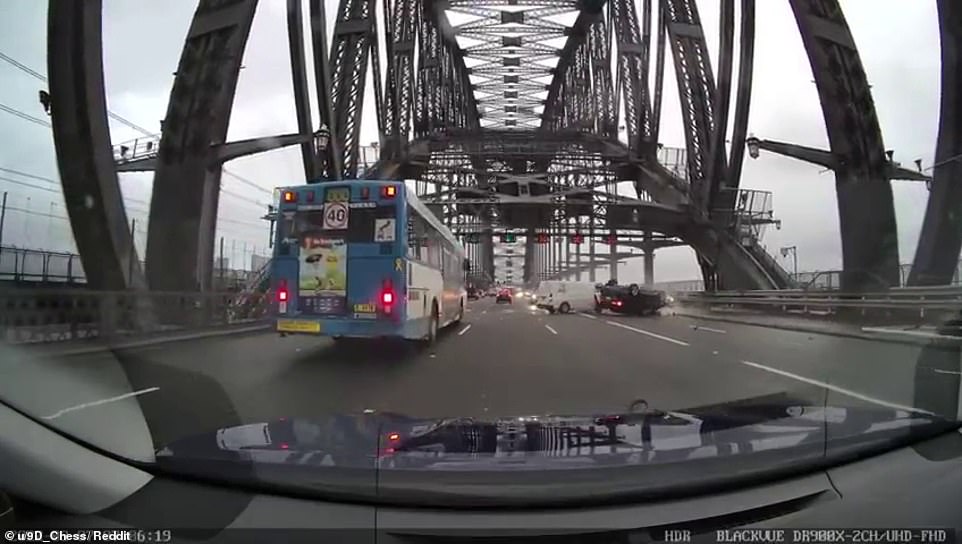 The attempt to dodge the first car just led to it crossing into oncoming traffic and slamming head on into a van coming the other way, with a third car hit by the ricochet

The force of the crash knocked the SUV on to its roof and it almost immediately started smoking, even as other motorists ran over to help drag the driver out of the stricken vehicle.

Soon after the Kluger burst into flames and was burned in a huge fireball visible from kilometres away.

Other witnesses described seeing the Kluger driving erratically across the centre lanes of the bridge.

‘The [car] that caused it was going about 100km/h on the wrong side of the road then swerved into the correct lane then lost control crashed head on with a van… car flipped and caught fire,’ one claimed.

Horrific photos showed the car flipped on its roof in the city-bound lane completely engulfed in flames. At least three people were injured and rushed to hospital but all survived.

Two cars are believed to have collided and involved a third car in the crash with two other damaged vehicles seen sitting alongside the burning wreck. 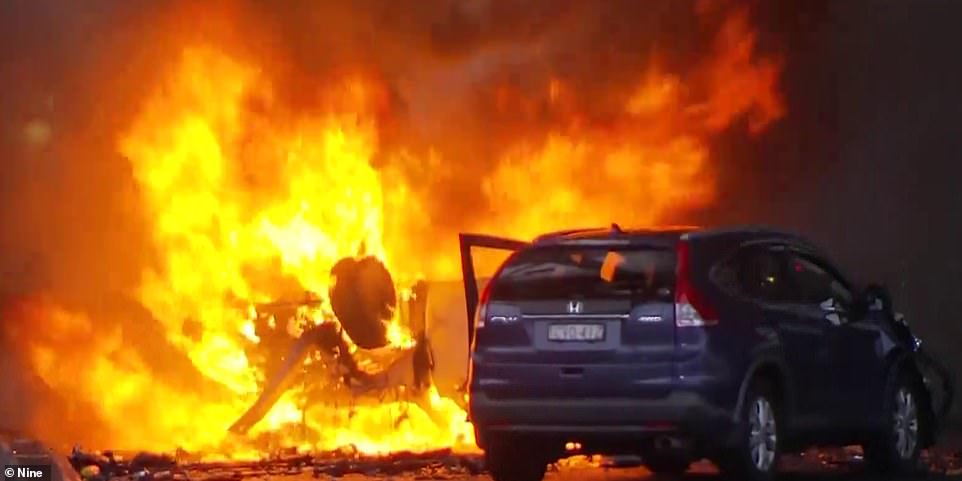 Horrific footage showed a car flipped on its top in the city-bound lane completely engulfed in flames. It is not clear if anyone was badly injured 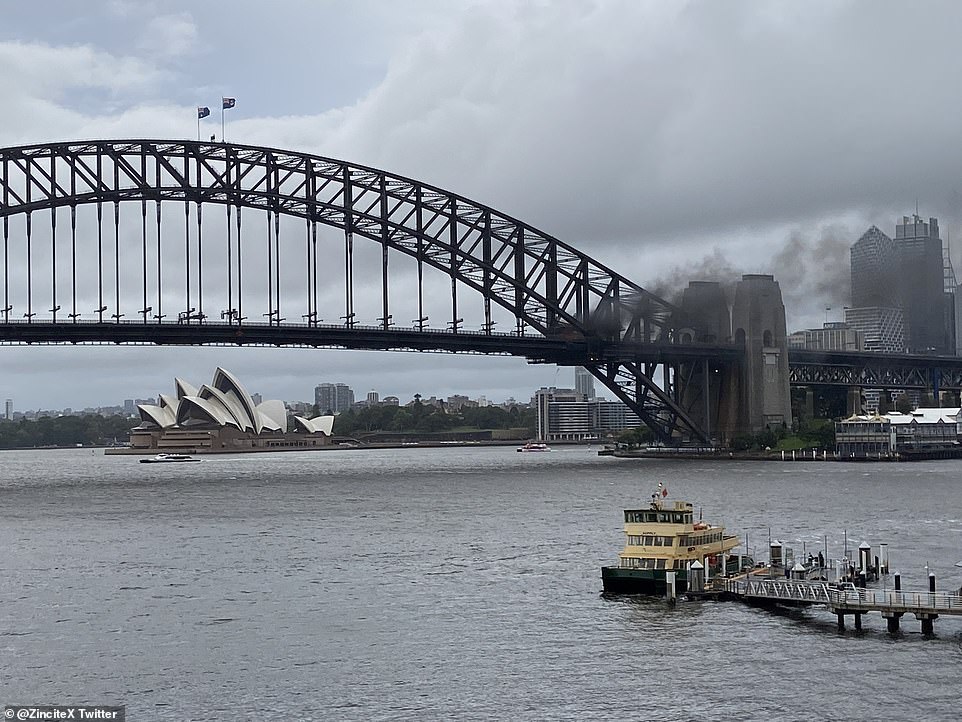 Thick, black smoke was visible for several kilometres, filling the air well above the arch of the iconic bridge

Witnesses said the head-on crash happened about 7.15am, followed by an explosion on lanes five and six as the car burst into flames.

Two of the drivers – a man and a woman in her 60s – were treated at the scene by NSW Ambulance paramedics, with the man taken to Royal North Shore Hospital and the woman to Royal Prince Alfred Hospital for treatment of non-life threatening injuries.

The driver of a van, a man in his 20s, was trapped and freed by rescuers, before he was taken to St Vincent’s Hospital in a serious but stable condition.

One of the three patients was complaining of chest pains from the crash, and a second man was put into an ambulance in a neck brace.

NSW Fire and Rescue Acting Superintendent Matt Sigmund said heroic Traffic Management Centre worker dragged the driver of the van out of harms way as the car next to it burst into flames.

‘One of the traffic commanders came up to the incident in the very early stages, because he heard it, and actually dragged the van that had the person trapped in it away from the other vehicle that was on fire,’ he told Today.

Thick, black smoke was visible for several kilometres, filling the air well above the arch of the iconic bridge. 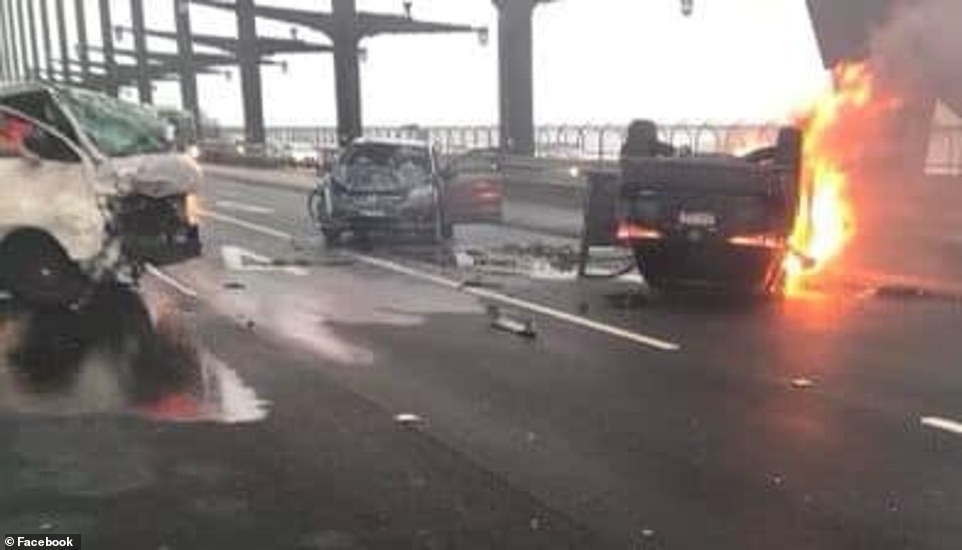 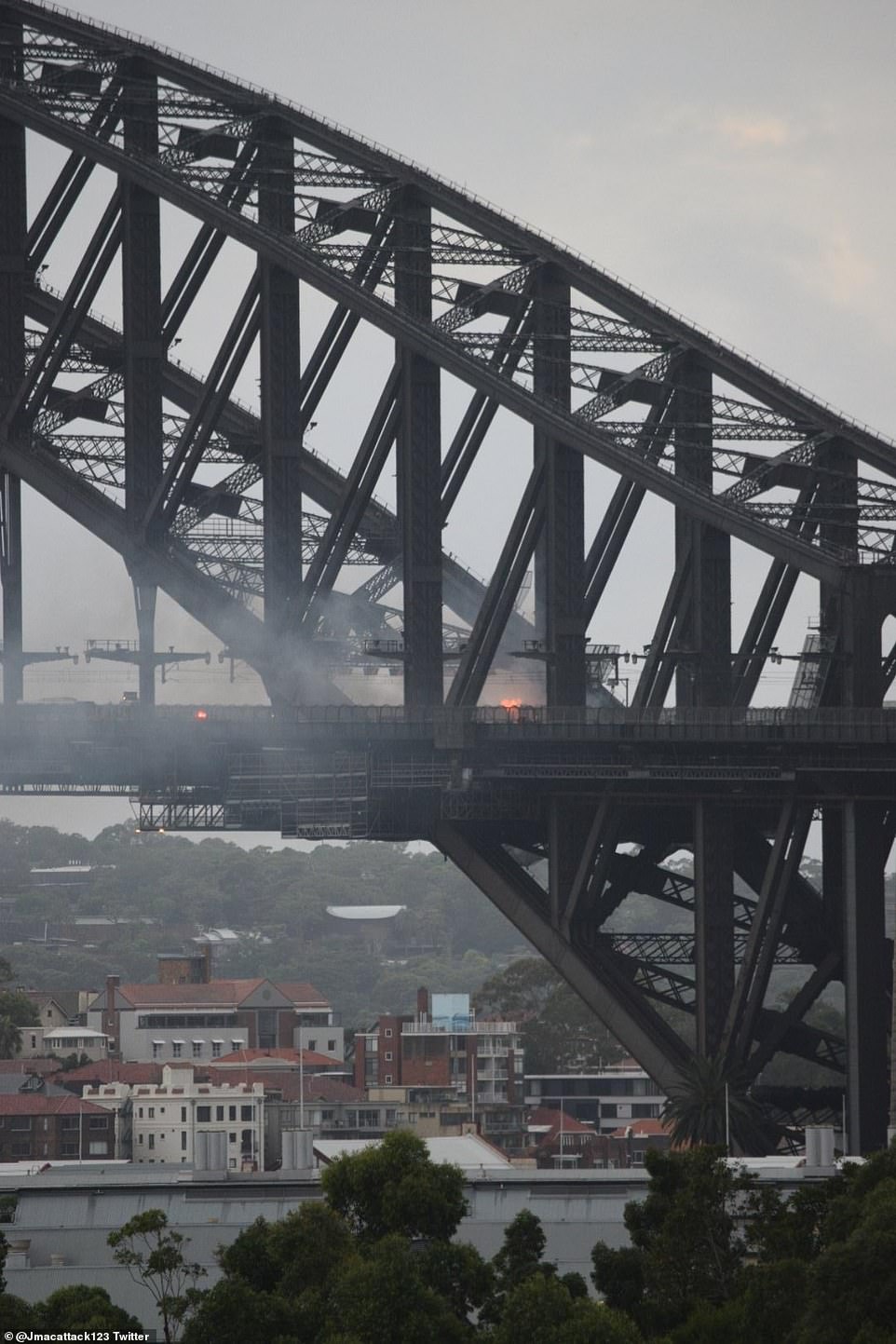 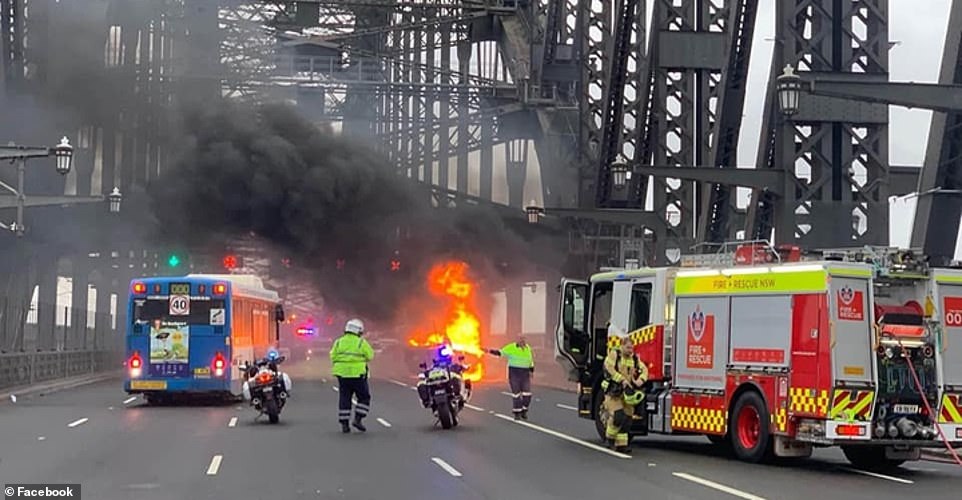 Two cars are believed to have collided with another damaged vehicle seen sitting alongside it, but details of how the accident occurred are not yet known

Traffic was backed up as far as the eye could see with lanes closed in both directions while emergency services tried to reach the scene.

Roads towards the bridge were so gridlocked that police were seen abandoning their cars on the on-ramp and running through traffic to reach the scene.

Two northbound lanes were open by 9pm, but traffic was moving at a crawl.

‘Those travelling towards the city should allow plenty of extra travel time and consider using the Sydney Harbour Tunnel or Anzac Bridge as an alternative.’ 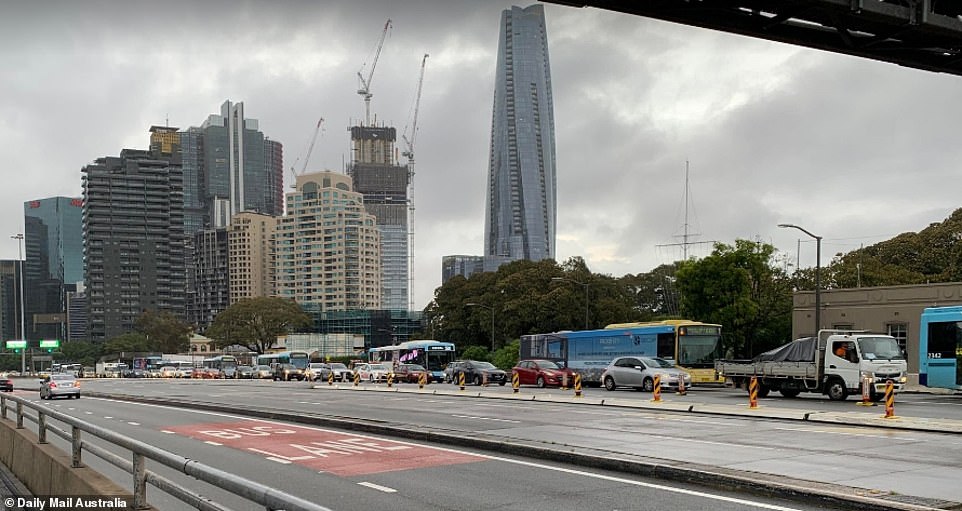 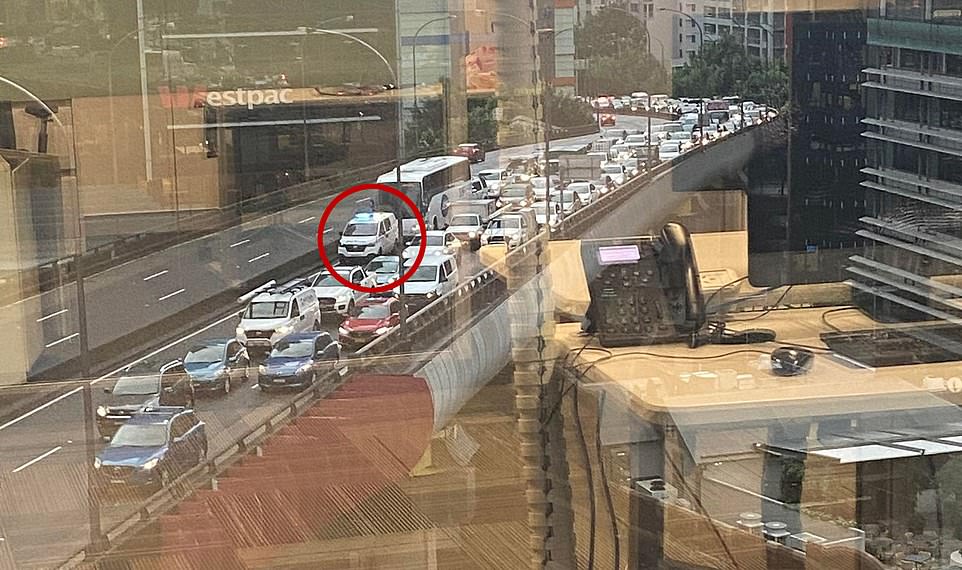 NSW Ambulance Inspector Giles Buchanan hailed as heroes the motorists who jumped out of their cars to save the driver of the car before it caught fire.

‘A number of bystanders and other emergency service workers who risked their lives to assist these patients are absolute heroes, we can’t thank them enough,’ he said.

‘One of the vehicles was well alight when we arrived on scene, it was an extraordinary effort to get the patient out of the vehicle safely.

‘We urge all motorists to drive to the conditions especially in this treacherous weather.’

The fire was extinguished by 8am with 25 firefighters on the scene. 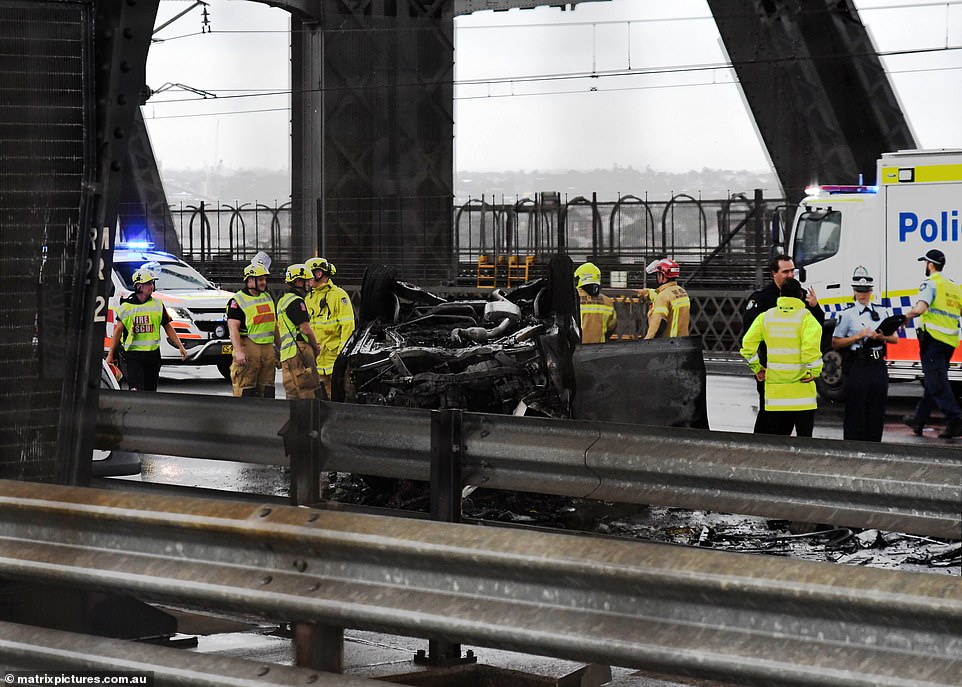 Fire crews assess the scene after dousing the flames, leaving just a burned husk of one of the three cars 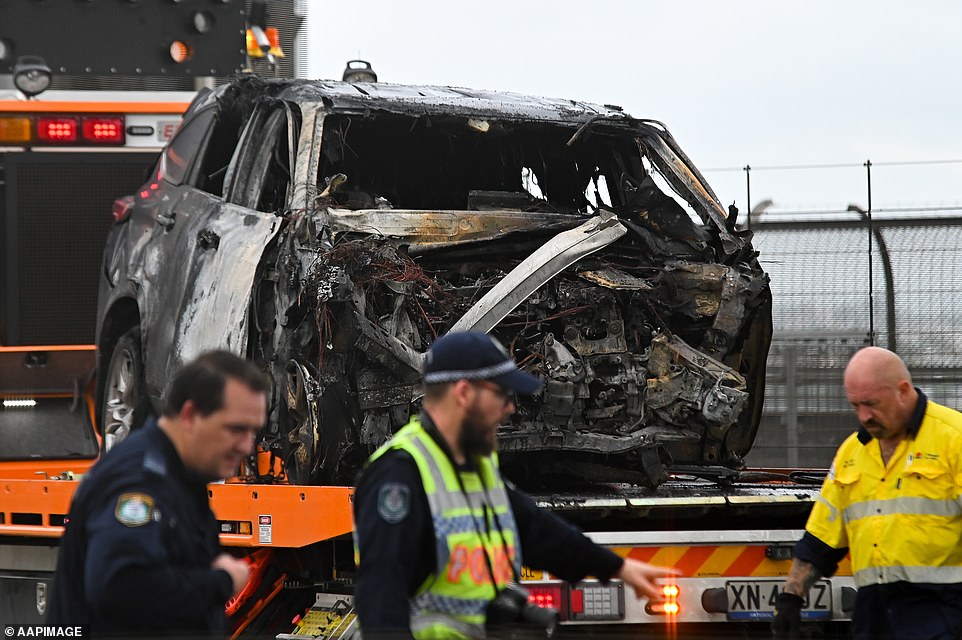 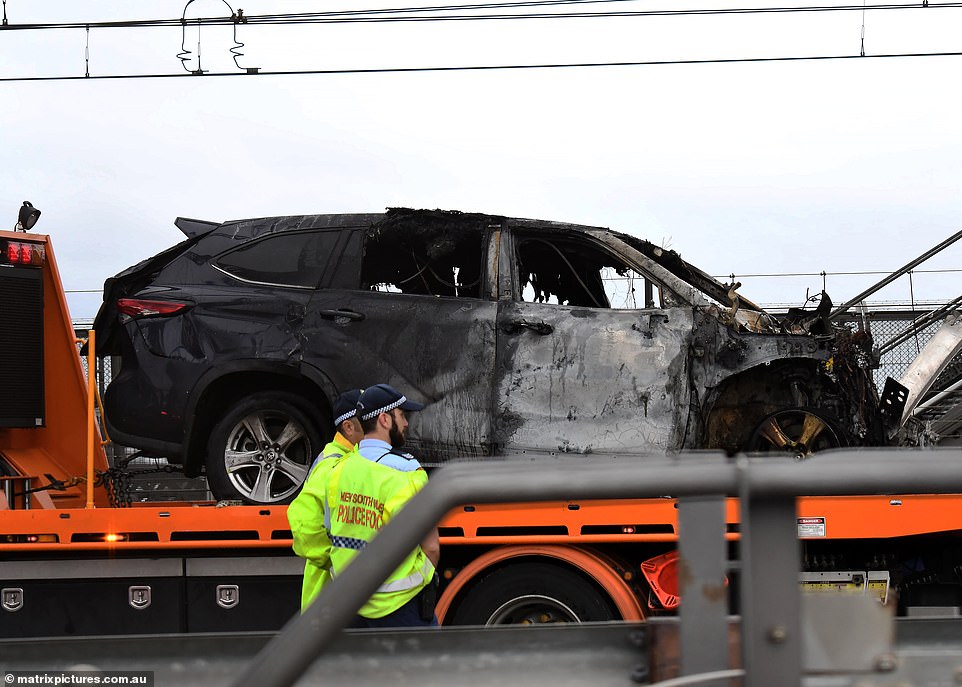 Transport across Sydney was already delayed by the wild weather with trains disrupted due to persistent rain with more expected on Monday.

The Bureau of Meteorology issued severe weather warnings for Sydney and other parts of NSW and commuters were advised to stay home if possible.

‘The impact of debris and unprecedented rainfall can be seen across the rail network, and has forced trains to run at much lower speeds,’ Transport for NSW said.

‘Please do not travel unless it is absolutely necessary. Road users are also urged to avoid non-essential travel and to exercise caution on the roads.’ 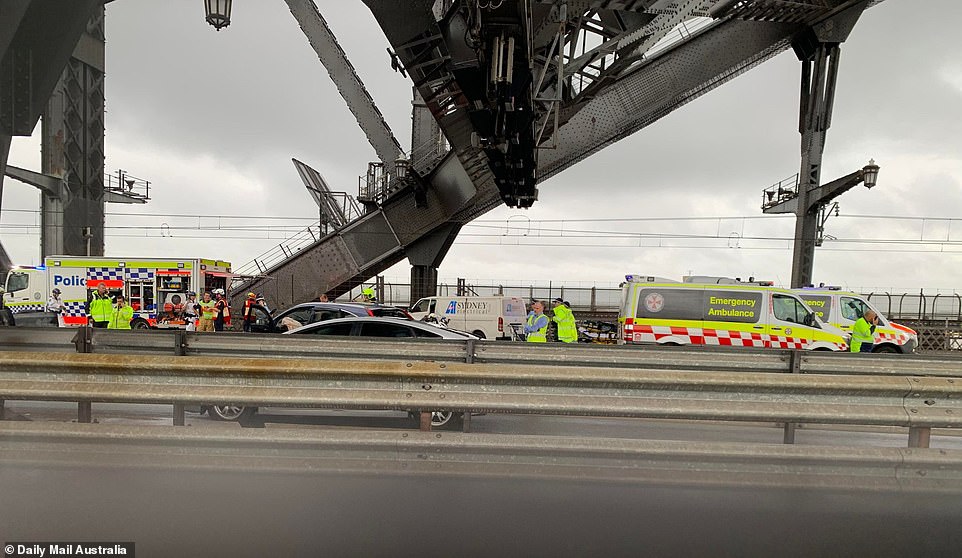 The driver of the car engulfed in flames was rescued before the fire began and taken to hospital, along with an elderly woman in her 60s in the other car