A former professional rugby player died after he was swept out to sea when he dived in to save his teenage children at a Haven Holidays park, an inquest heard.

David Fell, 55, was on a family holiday when he sprung into action after spotting his teenage son and daughter getting into difficulty in the water near Filey, North Yorkshire.

But as he went out to help, David was swept out to sea by a rip tide and died after getting into difficulty in the sea.

The RNLI pulled him from the water and tried to revive him through CPR but an inquest heard he couldn’t be saved.

Assistant coroner for North Yorkshire Oliver Longstaff ruled that he had not drowned due to the lack of fluid found on his lungs.

Instead he said it was more likely he had suffered a cardiac arrest brought on by the stress of the situation, though this could not be conclusively proved. 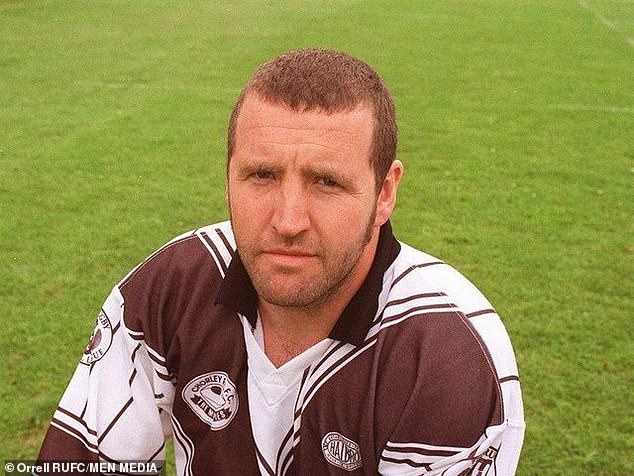 A former professional rugby player died after he was swept out to sea when he dived in to save his children at a Haven Holidays park, an inquest heard 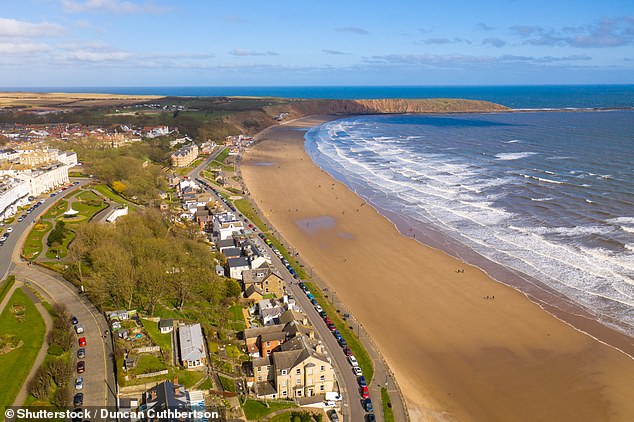 David Fell, 55, was on a family holiday when he sprung into action after spotting his teenage son and daughter getting into difficulty in the water near Filey, North Yorkshire

David, who played professional rugby league for Rochdale and Salford in the 1980s, was on a family break at Reighton Gap beach, when tragedy struck on July 22.

The coroner heard several people also went into the water and managed to rescue his two children.

His daughter was treated in ITU in hospital and is still suffering as a result of her injuries.

A postmortem initially established David died from immersion in water, but pathologist Dr David Scoones revised his opinion after the inquest heard he’d not been seen to struggle, shout for help and had never actually reached his children or their rescuers.

He provided evidence that David had a severely narrowed coronary artery that would have left him at increased risk of cardiac arrest.

Recording a narrative conclusion, Mr Longstaff said: ‘This was a tragedy for the Fell family. The members of the public who rescued his children showed considerable bravery and heroism.

‘This incident was not anybody’s fault in a legal sense and there was no breach of duty to David Fell.

‘I find it significant that none of the witnesses put Mr Fell at the scene of the rescue. He was a strong swimmer and family man and I find it inconceivable that he would not have wanted to participate in the rescue of his children.

‘Nobody heard him shout for help. The next time anyone saw him, he was motionless.

‘Dr Scoones at no point offered drowning as the cause of death. I asked him to review his evidence in light of the witness statements, and it seems that the stress of entering the water may have increased the risk of cardiac arrest from underlying heart disease.

‘The emergency involving his children exacerbated this stress.

‘It is an understandable assumption made on the day that he drowned, but this is not proved and the medical evidence is categorically that he did not drown. The cause of death is natural, but in my view this does not do justice to the circumstances.’

The inquest, held in Northallerton, heard the RNLI and Scarborough Council decided not to instate a lifeguarding service at Reighton Gap near Filey despite being warned of rip tides.

The RNLI’s end of season report into water safety in 2019 included a warning that shifting sand bars were increasing the severity and frequency of rip tides on the coast, leading them to respond to two multiple-casualty ‘near drowning’ incidents that summer, it was heard.

David was staying at Haven’s Reighton Sands holiday park two years later when he was caught in a rip and dragged out to sea alongside his two teenage children, who were both saved by other beachgoers.

He had not been in the water originally but entered when his son and daughter were seen to get into difficulties. The girl was seriously injured and suffered an abdominal aortic rupture.

The inquest was told that the RNLI and council jointly decided in 2019 that despite the higher risk of rip currents, it was ‘not practical’ to extend the lifeguarding coverage from Filey Bay to Reighton Gap on a permanent basis due to access issues.

Instead, lifeguards stationed full-time at Filey Bay would continue to patrol the 9km stretch of beach including the Gap in a vehicle and additional signage was installed along the path from the caravan park to Reighton Gap.

Speaking on the opening day of the inquest on Monday, David’s widow Fiona said they wouldn’t have gone in the water if there were signs warning of rip tides on the beach, which is next to Reighton Sands Holiday Park.

Bourne Leisure, which owns the company Haven Holidays that runs the holiday park, disputed her claim and said there are a number of warning signs.

The inquest heard there are three signs that warn people ‘water is unpredictable’ and explain what they should do if someone gets into difficulty.

But there are no signs warning people specifically about rip tides, no lifeguards and no flag warning system, it was told.

Fiona said: ‘My family and I are deeply shocked and upset by all that has happened. I have had to face the realisation that I lost my husband but could have also lost my children.

‘I can say that there were definitely no warning signs, flags, lifebuoys or any lifeguards on duty on the beach that day.

‘I am very diligent with regards to looking for these things, as my son suffers with epilepsy.

‘If I’d known the potential dangers of ‘rip tides’ and currents I would have never allowed them to go into the sea.

‘I feel adequate measures must be put in place immediately in order to prevent another family from grieving forever. Just as we were.

‘We, as a family, feel this has been a catastrophic accident waiting to happen.’ 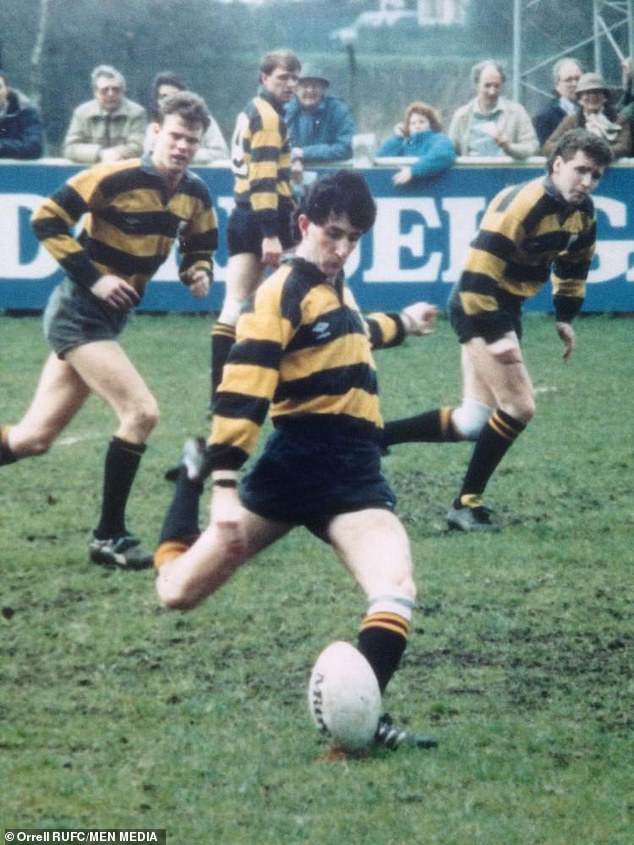 David, who played professional rugby league for Rochdale and Salford in the 1980s, was on a family break at Reighton Gap beach, when tragedy struck on July 22 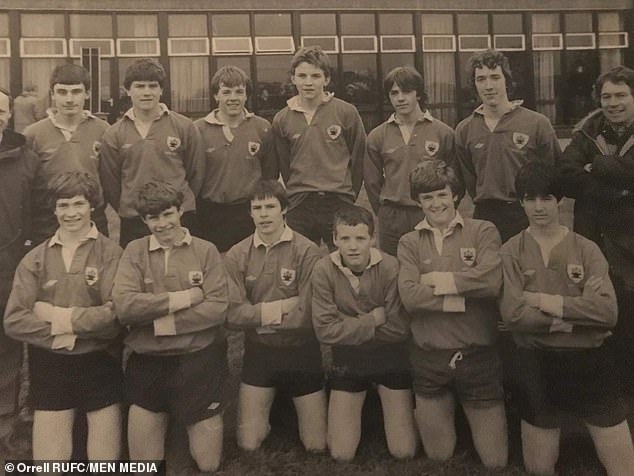 The inquest heard rescuers managed to pull her son and daughter to safety using paddleboards and a man on the beach used a drone to try to locate her husband, before the RNLI crew arrived.

Jenna Free told the inquest: ‘We looked and we looked, but couldn’t see anything, it felt like ages.

‘The lifeguard boat came and it started to come towards us. I directed them up to the sky, where my husband’s drone was, so they had a kind of an idea of where to go.’

In a statement released after the incident, the RNLI said the crew were on scene ‘very quickly’ as they were preparing to take part in an exercise nearby when the call came in.

David was transferred to paramedics in Filey ‘at top speed by boat’ but pronounced dead later that day.

Born in Wigan, David represented Lancashire in both codes of rugby, and was part of the Salford team that won the second division championship in 1991.

Salford’s director of rugby and operations Ian Blease, a former teammate of David, said after his death: ‘David was a great guy, and a really talented rugby player.

‘David was the sort of person who fitted in so well with the group of players here and we all became an especially close-knit team.’

The inquest, which is expected to last two days, continues.