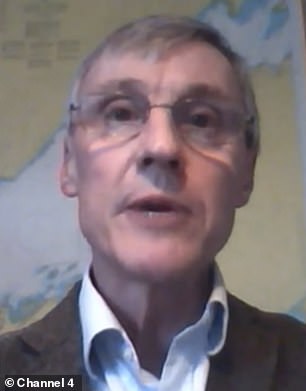 Professor Mark Woolhouse, professor of infectious disease epidemiology at the University of Edinburgh

Britons from other parts of the UK who holidayed in rural Scotland last year did not cause any coronavirus outbreaks, a top Government scientist claimed today.

Professor Mark Woolhouse, an infectious disease expert at Edinburgh University, said that, despite being ‘very busy, not a single cluster of ‘any significance’ was traced to staycations in the Highlands and Islands last summer.

Professor Woolhouse, who is also a member of the SAGE subgroup SPI-M and an adviser to the Scottish Government, said there was no reason not to encourage tourists to visit again this year.

Experts believe that fresh, breezy air and warmer temperatures cut the risk of the virus spreading, which makes catching the virus in the spacious outdoors highly unlikely.

If his comments are acted upon, it could offer a huge boost for the tourism industry in Scotland and more broadly around the UK.

Ministers, including Boris Johnson and Transport Secretary Grant Shapps, have cast doubt of foreign and domestic holidays in recent weeks, telling Brits to wait for the vaccine roll-out to speed up before booking getaways.

Stay at home orders are due to be lifted in Scotland on April 6, when groups of up to six will be allowed to meet outdoors. The country will go back to its tiered system later that month.

Rush for the staycation: Brits already splashing out on domestic holidays as Boris targets the second week of the Easter holiday

Britons desperate to get away have been rushing to arrange staycation plans as Boris Johnson announced domestic getaways could reopen once more from the second week of the Easter holidays.

Holidaymakers desperate for some respite from the coronavirus crisis are scrambling for bookings closer to home as the country begins to pave its way out of the national lockdown.

It comes as figures released by Avvio, which provides technology to more than 500 hotels around the world, revealed the demand for hotels in August has already risen by a whopping 239 per cent and July by 166 per cent.

The data, which was released today, also showed the revenue for June is up by 63 per cent.

Earlier today, Boris Johnson unveiled his ‘roadmap’ out of the lockdown in a statement to the Commons and warned the ‘threat remains’ and cases, hospitalisations and deaths will rise in the coming months.

Under the new plans, campsites and domestic holiday lets can reopen for single households from April 12 – but international travel is completely off the cards until at least May 17.

Announcing his plans, the Prime Minister said: ‘The threat remains substantial with the numbers in hospital only now beginning to fall below the peak of the first wave in April.

‘But we are able to take these steps because of the resolve of the British people and the extraordinary success of our NHS in vaccinating more than 17.5 million people across the UK.’

Mr Johnson said there would be a five-week gap between the main steps in the roadmap and explained it would take four weeks to assess the impact of each step.

‘I understand their frustration and I sympathise very much with the exhaustion and the stress that people are experiencing and businesses are experiencing… but to them I say the end really is in sight.’

In England, the stay at home rule is scheduled to end on March 29, and the ‘rule of six’ will kick back in from that date.

At Holyrood’s covid committee meeting today, Professor Woolhouse said: ‘I heard a lot of voices over the last summer saying these tourists from England were a potential epidemiological threat to those regions. I didn’t think they would be, and it turned out, they weren’t.

‘The Highland and Islands were very busy last summer and there were no outbreaks of any significance linked to tourists, there was no epidemiological problem in the Highlands and Islands during the tourist season.

‘When the sequencing came in later in the year, there were a few number of lineages of virus that could be linked to England – but not necessarily tourists – they were just six per cent of the total. This is not where Scotland’s viruses were coming from.

‘It proved possible last summer to open up the Highlands and Islands to a significant extent without having a major problem. And now we’ve got the vaccine in place, it’s not clear to me why it would be more of a problem this place. If anything it would surely be less.’

He added: ‘Yes we could wall off the islands, and stop tourism. But I think we have to think very carefully about the balance of the public health gain from the loss of tourism income.’

He told MPs that no Covid outbreak anywhere in the world had been traced back to a beach.

He said: ‘Over the summer we were treated to all this on the television news and pictures of crowded beaches and there was an outcry about this.

‘There were no outbreaks linked to crowded beaches. There’s never been a Covid-19 outbreak linked to a beach ever anywhere in the world to the best of my knowledge.’

Covid causes infection by piggy-backing on droplets of moisture coming out of someone’s airways and its ability to float in the air is critical for infecting people.

Warmer air is more humid, meaning it has more moisture and droplets in the air bind to the droplets carrying the virus.

This makes them bigger and heavier and causes them to fall to the ground faster, where they are significantly less likely to infect someone.

In cold air, which is naturally drier, they can remain lighter and float for longer, meaning they’re more likely to spread disease.

Viruses tend to find it easier to spread in winter because people spend more time together indoors, where they are forced into closer contact than they would be in the park in summer.

The closer together people are, the more likely they are to spread the virus between them.

However, Professor Woolhouse warned that other outdoor mass gatherings – such as horse racing or football matches – were still risky because they have even less opportunity for social distancing and there are ‘pinch points’ at entrances, toilets and food stand.

Professor Woolhouse, who is a member of SPI-M, a subgroup of SAGE, told MPs that other outdoor mass gatherings were still risky.

He added: ‘I think we do have to understand where the risks are so that we can do as much as possible safely.’

Professor Woolhouse said the Government was too slow to reopen schools and outdoor activities in the first lockdown.

‘I think we probably could have considered reopening schools much sooner in the first lockdown,’ he said.

‘The other thing, quite clearly, is outdoor activities. Again, there was evidence going back to March and April that the virus is not transmitted well outdoors.

‘There’s been very, very little evidence that any transmission outdoors is happening in the UK.

‘Those two things, I think, could have been relaxed sooner in the first lockdown.’