A council is planning to remove thousands of ‘love locks’ from a bridge that needs maintenance work, sparking outrage from those who have left mementos there.

The Weir Bridge in Bakewell, Derbyshire, is covered in padlocks each dedicated to important moments in people’s lives including deaths, engagements and weddings.

The bridge, which first started being decorated with locks in 2012, is now considered a much-loved tourist hotspot as people with connections to the bridge continue to visit.

But concerns have been raised that this will be lost when the locks are removed as part of maintenance works being carried out by Derbyshire County Council.

The council has announced it must carry out the routine work on the bridge and that the locks must be removed as part of the repairs, according to the Derbyshire Telegraph.

The council, which will repaint the bridge and resurface the deck, is also expected to ban any further padlocks from being attached to the bridge. 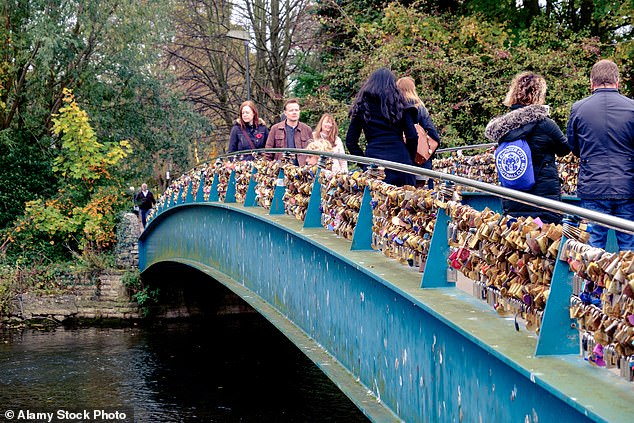 The Weir Bridge in Bakewell, Derbyshire, is famous for its love locks which cover every inch of the structure’s fencing but the locks are set to be removed so maintenance work can be done 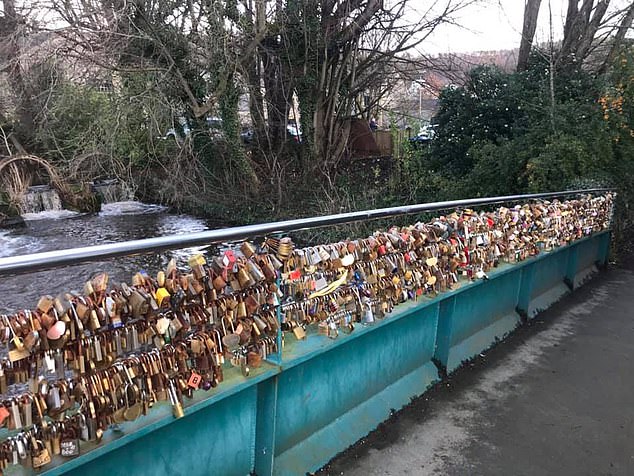 A Facebook group has been set up to try and make sure the locks (pictured) are not lost when the council removes them. People have suggested they are made available for collection while others have proposed the locks are converted into a piece of commemorative artwork

Love locks are padlocks traditionally used by couples who inscribe their initials on the locks before they lock them to a bridge, fence or monument and discard the keys.

The idea is to symbolise unbreakable love and since the 2000s, the locks have become commonplace in cities and towns across the world.

In response to the planned works, angry residents have set up a Facebook group – Save the Love Locks at Bakewell – to share concerns and ideas to stop the locks being lost for good.

The group’s founder, Richard Young, said: ‘The major problem is that no provision has been made for an alternative structure for love locks in the town and no definite plan for the unclaimed love locks when they have been removed.

‘Since 2012, many people have attached love locks to the bridge, not only lovers and friends and newly married couples but if you look carefully you will see tributes to dearly-departed relatives and the names of stillborn children.

‘The purpose of the Facebook group is to find a way forward with the council for an alternative to the bridge for attaching love locks and to put in place a system of future management, which will be acceptable to visitors and locals alike.’ 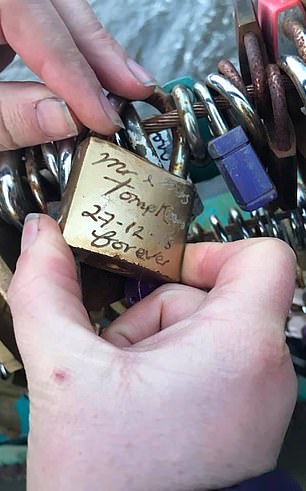 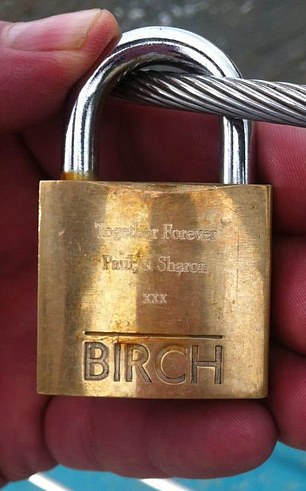 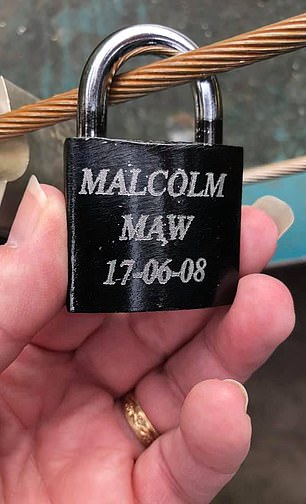 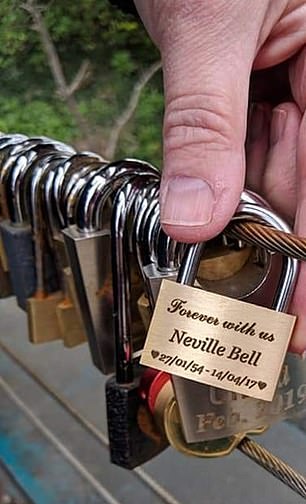 People have joined the group to share their own connections to the bridge.

Jan Rogers wrote: ‘My sister and her husband loved Bakewell, they both passed away within a few short weeks of each other in 2016.

‘There is a padlock in memory to them on the bridge.’

Gemma Tompkins added: ‘Gutted. We got married at the town hall and then put our padlock on the bridge. We haven’t got the keys either.’

Frances Bell shared a photo of her padlock and wrote: ‘Lock for my dad was our favorite [sic] place to visit and where we go every year to remember him be so sad to lose this place.’

Pam Disdel wrote: ‘We have gone to Bakewell for years after putting our lock on the bridge. It’s a shame they will lose tourists. It’s what keeps us coming back each year for holidays because our lock is on there.’

According to Bakewell Town Council meeting minutes, the county council plans to collect the locks and store them in a depot so people can collect them for ‘several months’ after their removal.

However the county council has said that discussions are ongoing as to what will happen to the locks once they are removed.

A spokesperson for Derbyshire County Council said: ‘We need to carry out some routine maintenance on the bridge and would need to remove the locks to do this work.’

‘However while the work is needed, it is not urgent, so we are in discussions with Bakewell Town Council and Derbyshire Dales District Council about the work, and what to do with the padlocks after they have been removed.’

‘No decisions have been taken yet and we will do all we can to promote the work to give people a chance to collect their locks’.