RAF gunner Corrie McKeague, who vanished on a night out in 2016, developed a ‘significant binge-drinking problem’ after his friend died on a train line when he was a teenager and he discovered the body, his parents told the first day of his inquest today.

Mr McKeague, of Dunfermline, Fife, was 23 when he disappeared in the early hours of September 24 2016 after being ejected from a night club in Bury St Edmunds.

Today the inquest into his death, due to last for up to four weeks, began in Ipswich, the county town of Suffolk.

His body has never been found, and his father Martin said in a statement that he had a ‘falling out’ with his son shortly before his disappearance after ‘having words’ with him about his drinking.

His mother Nicola described her son as being badly hurt by the suicide of a female friend when he was 15, and admitted her 23-year-old son loved nights out, and she believed that ‘if a stranger asked him to get into his boot to go to a party’, he would go.

Police believe the airman, who was stationed 10 miles away at RAF Honington, climbed into a bin which was then tipped into a waste lorry. 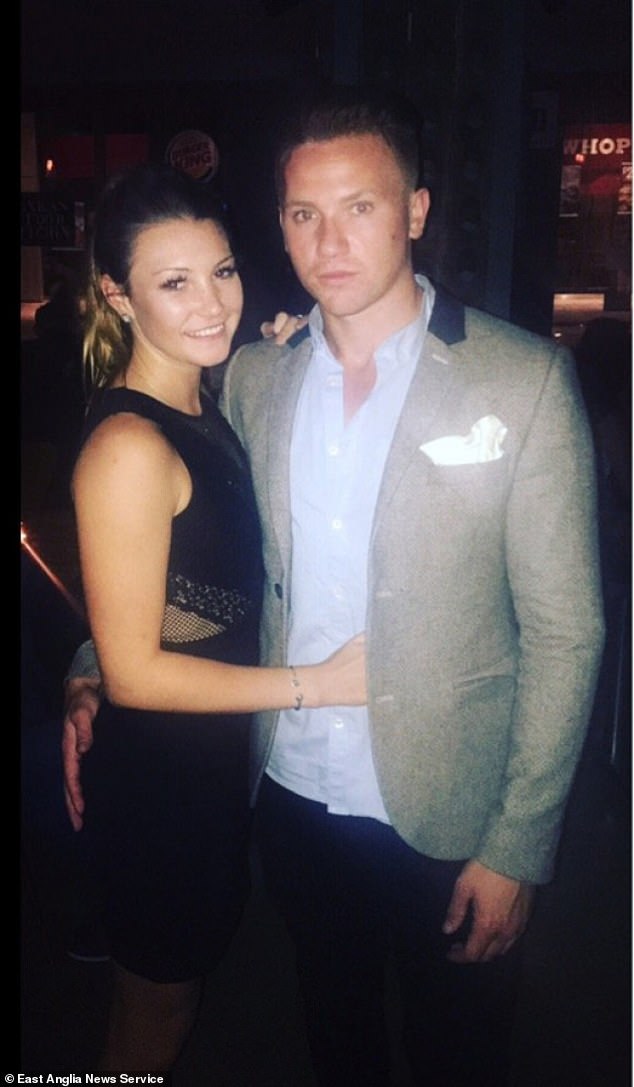 Missing airman Corrie McKeague, pictured with his girlfriend April Oliver, vanished after a night out in Bury St Edmunds in 2016 and was never found 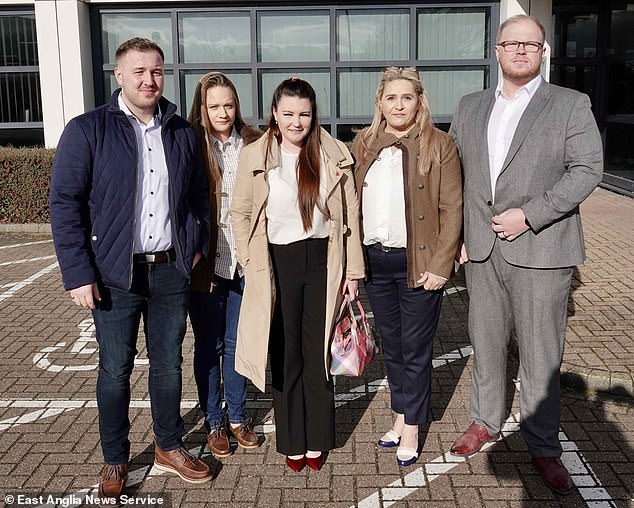 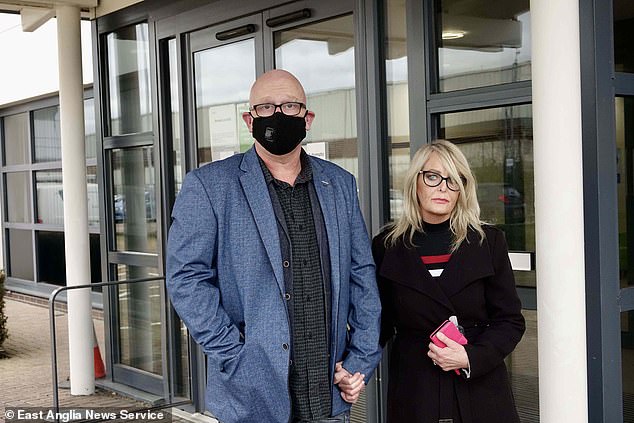 Mr McKeague’s father Martin McKeague said in a statement read by lawyer Peter Taheri, counsel to the inquest: ‘Corrie was a happy child, however there were major events that shaped Corrie’s life.

‘When Corrie was 10 years old Nicola (Urquhart, Corrie McKeague’s mother) and I had separated.

‘At the age of 15, when he was first to find the body of his friend who had just been killed on a train line, I believe Corrie developed a significant binge-drinking problem.

‘In his teenage years that impacted his emotional wellbeing and mired many of his relationships.

‘Following a visit to my home town in Cupar in 2016 shortly before his disappearance I once again had to have words with him about it.

‘We had a falling out over it.’ He said that his last contact with his son was on his birthday, September 16, ‘when I sent him a message to wish him a happy birthday and I sent him money’.

He said the death of his son’s friend ‘was a terrible shock for a 15-year-old boy to suffer, and one I don’t think he ever truly got over’.

Mr McKeague continued: ‘I don’t believe Corrie was ever suicidal. This has been a heart-breaking tragedy.’

Mr McKeague’s mother Nicola Urquhart, in a statement read to the inquest in Ipswich by lawyer Andrew Walker, said one of her son’s ‘very close female friends was hit by a train and killed instantly’.

‘This event had a huge impact on Corrie,’ she said.

She said Mr McKeague had started to train as a hairdresser, then as a PE teacher, before joining the RAF. While he was prescribed antidepressants in the past, she said he was ‘back to his usual happy self’ by 2015.

Ms Urquhart said her son ‘regularly lost his phone or wallet on nights out’ but ‘was never aggressive with or without alcohol’.

‘There was nothing to suggest Corrie had any problems or concerns around the time of his disappearance,’ she said.

She said he had told her that he had ‘bumped a taxi on one occasion, meaning he had run off without paying’.

She said that ‘if a stranger asked him to get into his boot to go to a party’ she believed that he would go.

‘Despite what’s in the press, as far as I’m aware Corrie had never slept in a bin nor had he ever climbed into a bin to sleep,’ Ms Urquhart said.

Mr McKeague’s brother Darroch McKeague said in a statement that Corrie planned to come back to Scotland for Halloween.

He said that when he spoke to his brother on September 23 he was ‘happy’ and ‘looking forward to his night out’. 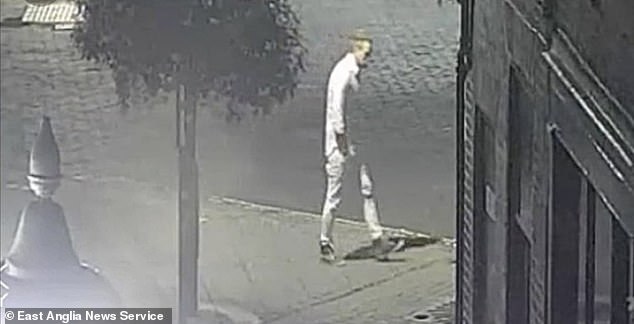 Corrie McKeague, pictured on the night out when he disappeared, on one of the final CCTV images of him alive

Suffolk’s senior coroner Nigel Parsley said Mr McKeague, who had served in the RAF for three years, drank a ‘significant amount of alcohol during the evening’ of September 23.

He said Mr McKeague was asked to leave Flex nightclub and ‘was seen on a number of occasions on CCTV’.

‘He’s seen to sometimes be alone, sometimes in conversation with others and seen to obtain food,’ Mr Parsley said.

He said that at 3.25am on September 24 CCTV captured Mr McKeague entering a horseshoe-shaped area in Brentgovel Street.

‘You might find based on evidence that 3.25am is the last time Corrie was seen and known to be alive,’ Mr Parsley told jurors.

He said police investigations and searches failed to locate Mr McKeague, there has been no contact with family and no financial transactions that can be linked to him.

He said jurors will hear evidence about Mr McKeague’s movements on September 23 and 24, his contact with any witnesses and ‘hypotheses and possible scenarios relating to Corrie’s disappearance’.

The inquest, due to last for up to four weeks, continues.