Chilling police calls and harrowing eyewitnesses accounts are being used to piece together Monday’s deadly shooting in Boulder, Colorado, which left ten people dead, including a police officer.

At around 2:45 p.m., the Boulder police scanner alerted officers that there was an active shooting in progress at the King Soopers supermarket.

At white man was firing on people with a rifle in the parking lot, they were told, and he was possibly wearing a tactical vest.

As law enforcement arrived, they found a scene of carnage. Two people were lying unresponsive on the ground outside the store, with a third just inside the entrance.

From inside the store an officer shouted out ‘Shooter inside! He just shot at us twice.’

After a few seconds of calm, chaos ensued, with someone saying over the police scanner ‘Officer down inside the building.’ 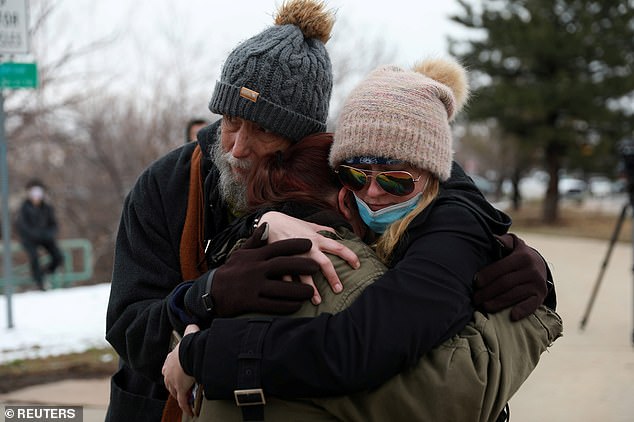 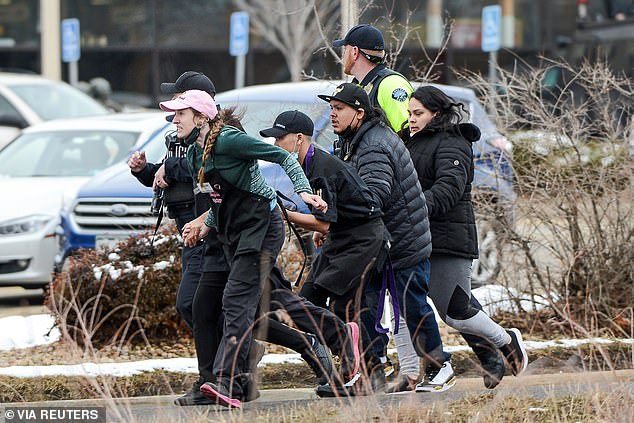 Pictured: King Soopers employees are led away from an active shooter at the King Soopers grocery store in Boulder, Colorado, U.S. March 22. 2021 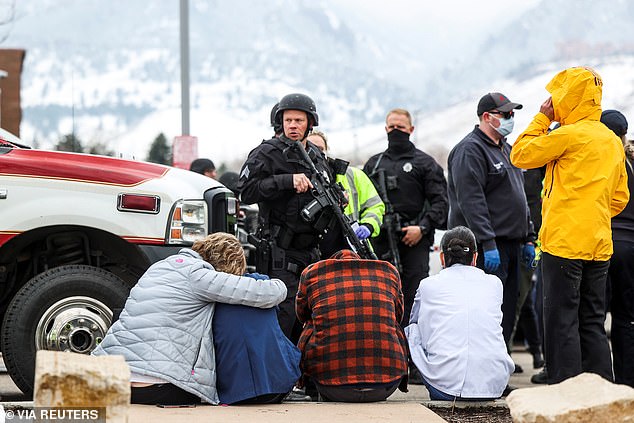 As law enforcement arrived, they found a scene of carnage. Two people were lying unresponsive on the ground outside the store, with a third just inside the entrance. Pictured: Police guard people evacuated after a call of an active shooter at the King Soopers grocery store in Boulder 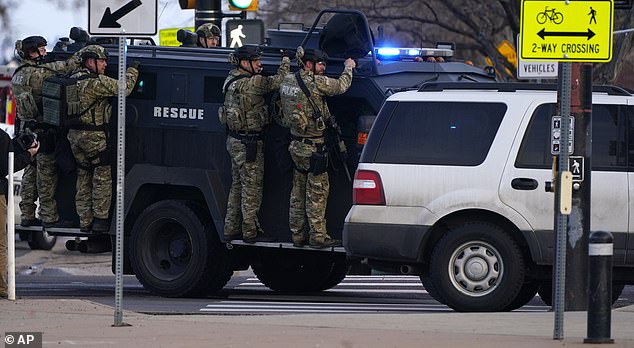 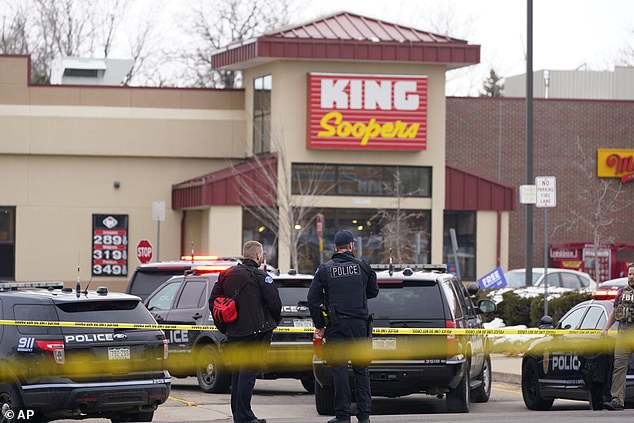 Archived emergency radio scanner traffic was obtained by The Colorado Sun to reconstruct the the events on Monday afternoon.

The release comes after the news of 51-year-old police officer Eric Talley’s death, one of the 10 people killed in the attack on the Table Mesa King Soopers.

Officers arrived at the scene within minutes. Within 10 minutes, Officer Talley was shot, and within 15, Boulder police were launching a SWAT response and requesting back-up from Jefferson County. A medical helicopter was also en-route.

‘Due to body armor, head-shots only,’ one officer said over the radio around half an hour into the shooting.

‘You may need more than one helicopter?’ a dispatcher asked. ‘Multiple people down,’ an officer responded.

Later, multiple helicopters arrived at the scene, but none would carry a patient away. Everyone on the scene was either dead, wounded, or taken away in handcuffs.

One man has been detained after being wounded in the shooting, with video showing a white man being lead away by officers with blood running down his right leg. He was taken to a stretcher, seen wearing only a pair of boxer shorts. 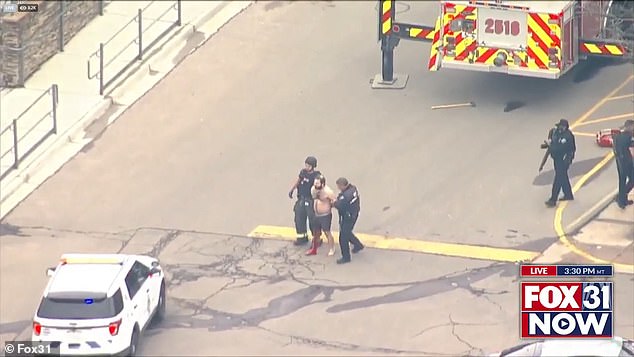 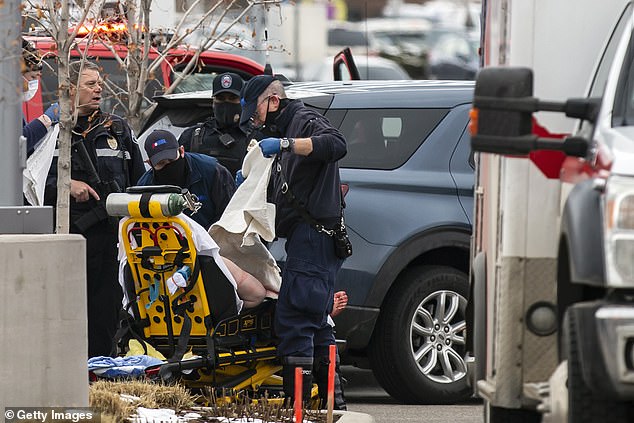 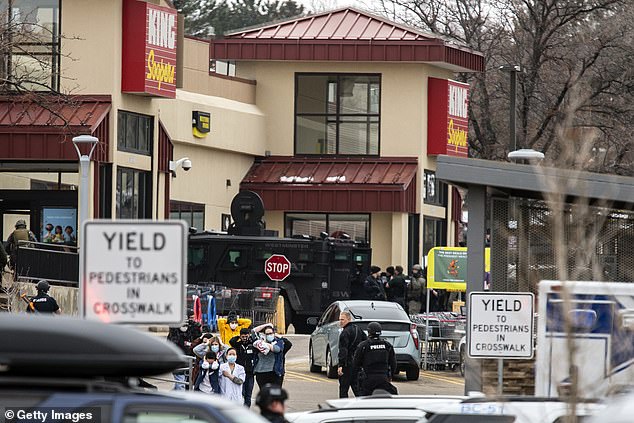 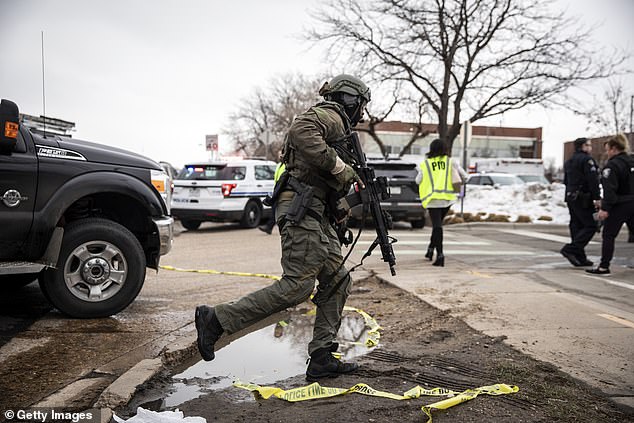 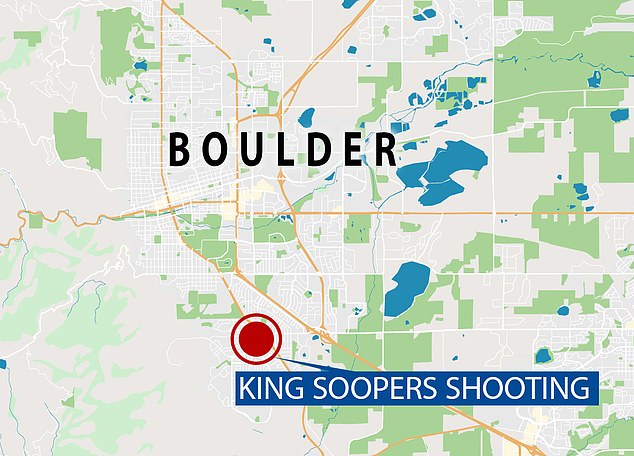 Boulder (depicted) is located about 25 miles northwest of Denver

One survivor who witnessed the shooting said he never could have imagined such an attack could happen in a college town like Boulder.

‘Boulder feels like a bubble. And the bubble burst. And that’s heartbreaking to think that people died today,’ Ryan Borowski told CNN.

‘It does not feel like there’s anywhere safe anymore sometimes,’ he added, speaking to the network’s Erin Burnett. ‘This feels like the safest spot in America, and I nearly got killed for getting a soda and a bag of chips. Does not feel good.’

Borowski said he was on his way to buy ice cream when he heard three loud pops, after which everyone started running.

‘We ran to the back of the store and out the back door and employees showed us the way. We told employees what was going on so everybody helped each other,’ he said.

‘I didn’t see the shooter. I saw terrified faces running towards me and that’s when I turned and ran the other direction.’ 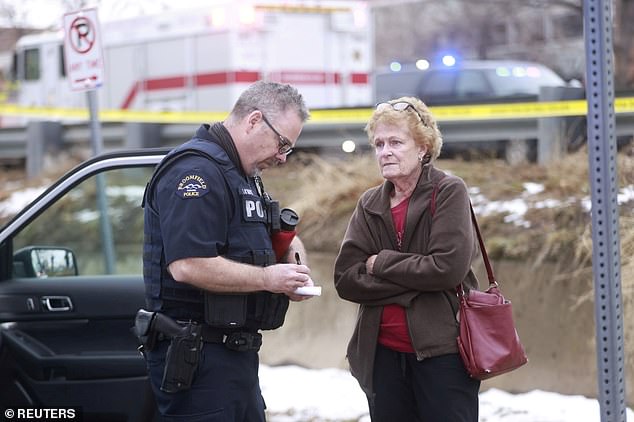 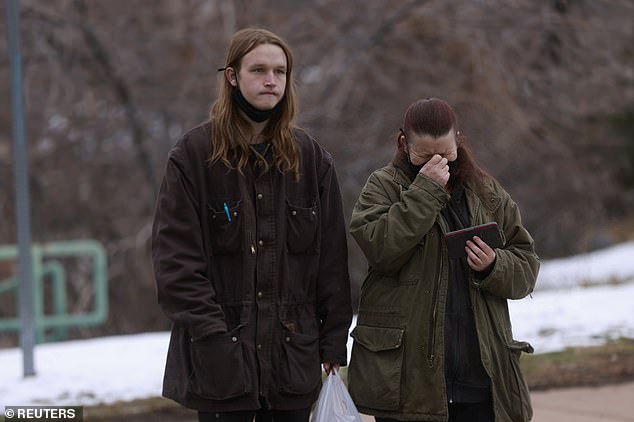 Alex Arellano, 35, told the New York Times ‘I thought I was going to die’. He was working at the King Soopers when he heard gunshots and saw people fleeing.

James Graham, a 47-year-old from Erie, said he was in the check-out lane of the supermarket when he heard a loud bang, followed by glass falling on him. He initially thought something had fallen on him, but he quickly realised he was being shot at.

‘I can can still smell the gunpowder,’ Graham told the Daily Beast, saying he ran to the back of the grocery store where people were escaping through a loading dock.

Nevin Sloan, who narrowly escaped with his wife Quinlan, said panic then set in as the sound of gunshots drew closer and shoppers were forced to decide whether to stay put or make a break for the exit. 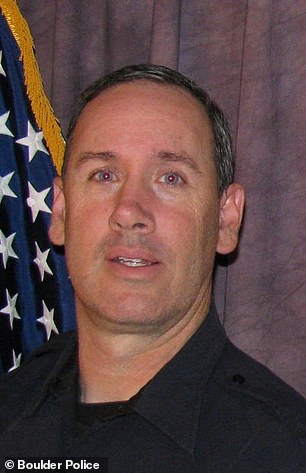 A gunman killed 10 people, including Boulder Officer Eric Talley (pictured), at a grocery store in Colorado on Monday

‘All of a sudden we started hearing more, like ‘bang, bang, bang, bang’ and I sprinted over to her and just told her ‘hey we need to get out of here’,’ he told CBS, saying they had helped others flee through an emergency exit.

‘I just nearly got killed for getting a soda and a bag of chips,’ Ryan Borowski, who was in the store when he heard at least eight gunshots, told CNN.

Anna Haynes, 21, told the Daily Beast that she watched the events unfold from her window. She said she froze when she saw a man shoot someone on a ramp into the store, before telling her roommate.

‘We just stared and we’ve been staring ever since,’ Haynes said, speaking from her porch. ‘I saw it but I didn’t believe it.’ 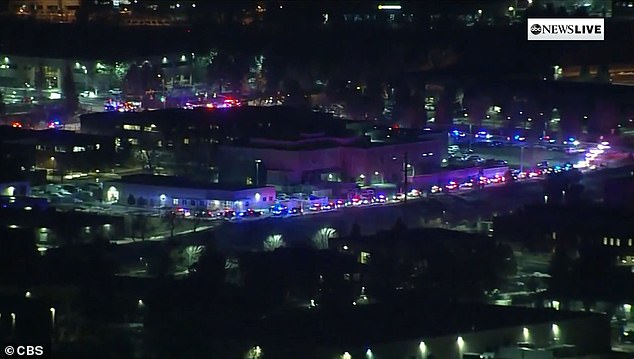 Boulder Chief Maris Herold who called Talley’s actions ‘heroic’, said he was the first on the scene when he was fatally shot. Talley had been with the Boulder Police Department since 2010. The procession is seen driving through Boulder Monday night

Mark Naughton, 53, said he also saw the gunman shoot someone in the parking lot as he watched from his window, having just returned from the store himself. ‘I was a terrified he might be coming across the street this way,’ he told the Daily Beast.

Another witness told The Denver Post the suspect ‘didn’t say s**t’ before he began shooting at people inside the store.

‘He just came in and started shooting,’ the witness said. Another witness recalled the gunman ‘let off a couple of shots, then was silent, and then he let off a couple more. He wasn’t spraying.’

Another man who said he was shopping at the store told KCNC-TV that he heard ‘one loud bang, thought somebody just dropped something an employee or something, and then another, and then by the third one, everybody was running’.

He said they ran to the back of the store, found the employee area and workers told them how to escape. He said they walked single file, with their arms on the backs of those in front of them.

Another man told KCNC said his family was inside the pharmacy at King Soopers to get a Covid-19 vaccine when the shooter entered the building. 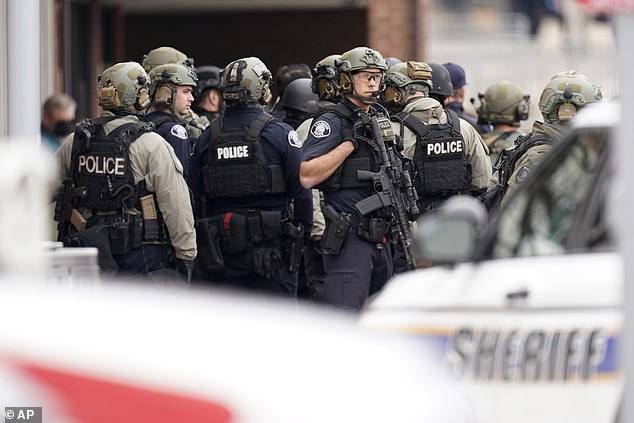 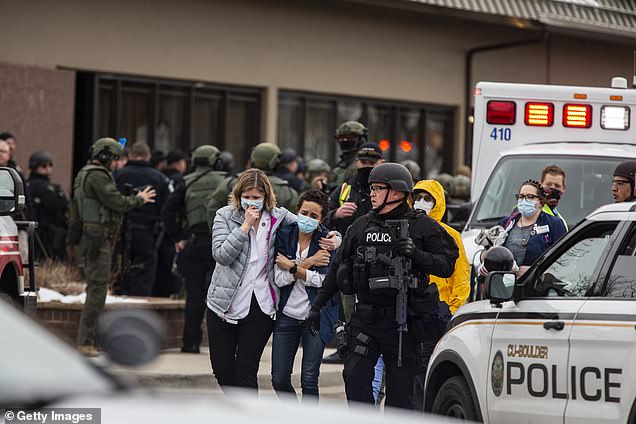 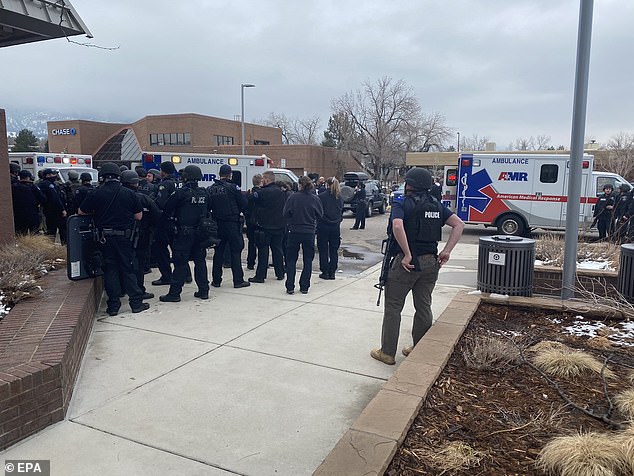 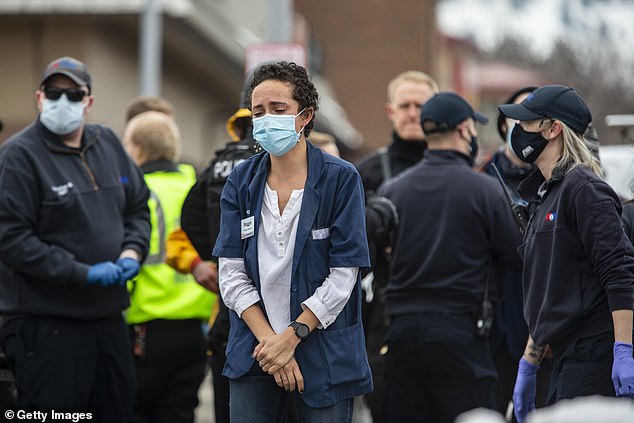 ‘I got the call from my daughter and my grandchildren that my son-in-law walked into the pharmacy for him to get a Covid-19 shot and the shooter came in, shot the woman in front of them,’ the man told the station.

He said his family then hid in a closet for an hour before they were rescued.

‘They were texting, hiding in the coat closet. Turned their phone off and were going ‘we’re hiding, we’re okay’ you know, ‘don’t call’ you know the phone would ring and give away their position,’ he added.

Sarah Moonshadow told the Denver Post that two shots rang out just after she and her son, Nicolas Edwards, finished buying strawberries. She said she told her son to get down and then ‘we just ran’.

Once they got outside, she said they saw a body in the parking lot. Edwards said police were speeding into the lot and pulled up next to the body.

Dean Schiller told The Associated Press that he had just left the supermarket when he heard gunshots and saw three people lying face down, two in the parking lot and one near the doorway. He said he ‘couldn’t tell if they were breathing’.

Video posted on YouTube showed one person on the floor inside the store and two more outside on the ground. What sounds like two gunshots are also heard at the beginning of the video.

Law enforcement vehicles and officers massed outside the store, including SWAT teams, and at least three helicopters landed on the roof. Some windows at the front of the store were broken.

At one point, authorities said over a loudspeaker that the building was surrounded and that ‘you need to surrender’.

The incident follows another mass shooting last week at Asian-owned spas in the southeastern state of Georgia that left eight dead.

‘Atlanta was a week ago and now it’s Boulder,’ Meredith Johnson, a 25-year-old resident from Boulder, told the New York Times. She was walking on the sidewalk across the street from the supermarket.

‘What is it going to be two weeks from now?’ she said. ‘We’re looking at it right in front of us — it’s not just something you see on your feed anymore and unfortunately that’s just a common experience in America. And especially for our generation.’ 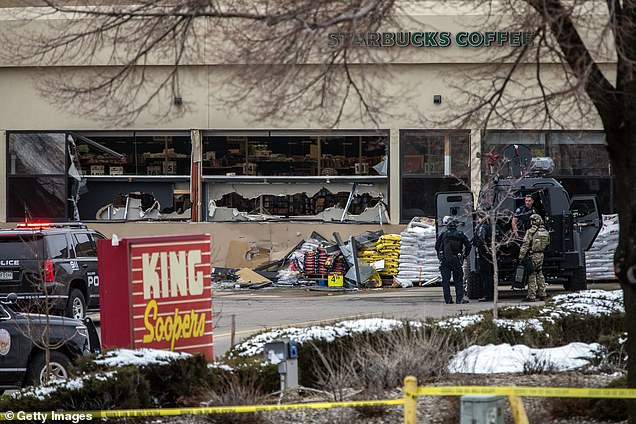 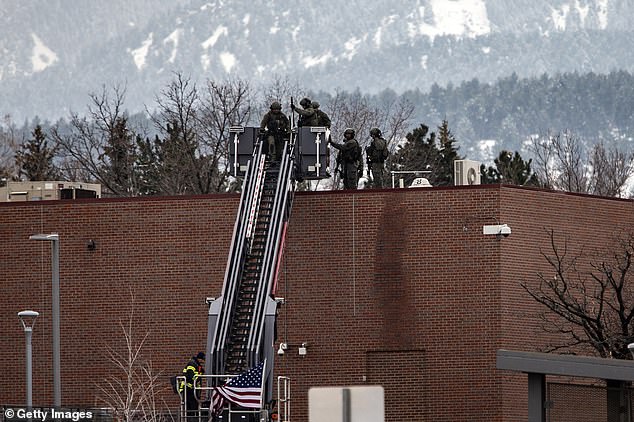 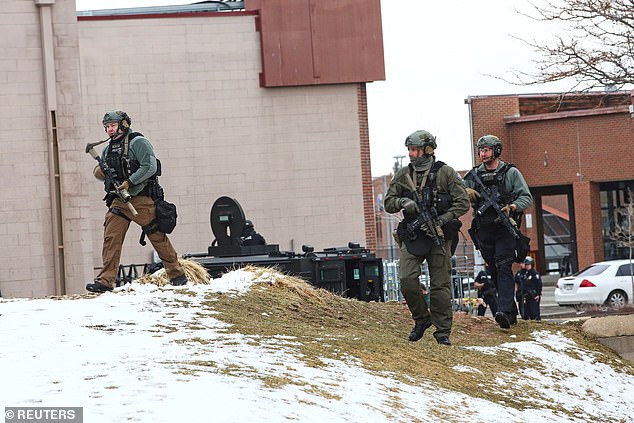 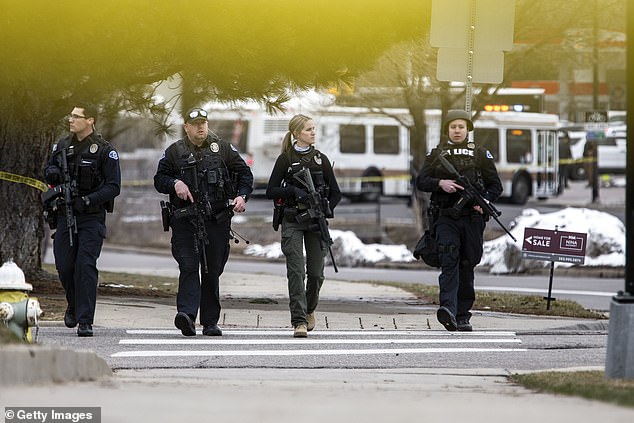 ‘Today we saw the face of evil. I am grieving with my community and all Coloradans,’ he said on Twitter.

The western state has previously suffered two of the most infamous mass shootings in US history – massacres that prompted nationwide soul-searching but did not result in major changes to the country’s lax gun ownership laws.

In 1999, two boys shot and killed 12 classmates and a teacher at Columbine High School.

Then in 2012, a heavily armed man stormed a movie theater in Aurora, murdering 12. The gunman is now serving a life sentence without the possibility of parole.

The city of Boulder imposed a ban on ‘assault-style weapons’ and large-capacity gun magazines in the wake of the Parkland, Florida shooting in 2018. 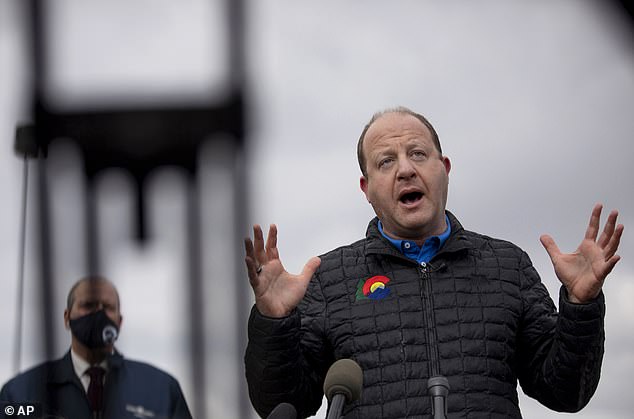 Colorado governor Jared Polis (pictured) condemned the ‘senseless killing.’ ‘Today we saw the face of evil. I am grieving with my community and all Coloradans,’ he said on Twitter

But a judge last week blocked that ban, the Denver Post reported, in a decision hailed by the NRA, a pro-gun advocacy group.

‘This administration will not wait for the next mass shooting to heed that call,’ he said.

Gabrielle Giffords, a former member of Congress who survived a shooting in 2012, said it was time for action.

‘This past weekend it was a house party in Philadelphia. And last week it was an armed attack on Asian American women in the Atlanta area,’ she said in a statement.

‘This is not normal, and it doesn’t have to be this way. It’s beyond time for our leaders to take action.’

Identities of the other nine victims were not disclosed Monday night as police were still notifying their family members.

Matthew Kirsch, the acting US attorney for Colorado, pledged that ‘the full weight of federal law enforcement’ will support the investigation.

He said investigators from the Bureau of Alcohol, Tobacco, Firearms and Explosives were at the crime scene, along with FBI agents.

Officers had escorted a shirtless man with blood running down his leg out of the store in handcuffs but authorities would not say if he was the suspect.

They did say the suspect was receiving medical care and was the only person injured who did not die.

The hospital will not release any further information on the patient, said Rich Sheehan, spokesman for Boulder Community Health, which operates the facility.