A senior charity executive told a black employee she hadn’t noticed her in a room because she was the same colour as the chair she was sitting in, a tribunal has heard.

Chief operating officer Hilary Pannack was given a written warning after Bambii Nzinga reported her for saying: ‘You’re so dark, you just sort of blended in’.

But following her official complaint against Ms Pannack, bosses at the education charity where they worked unfairly targeted Miss Nzinga and she eventually resigned, saying her life had been made a misery. 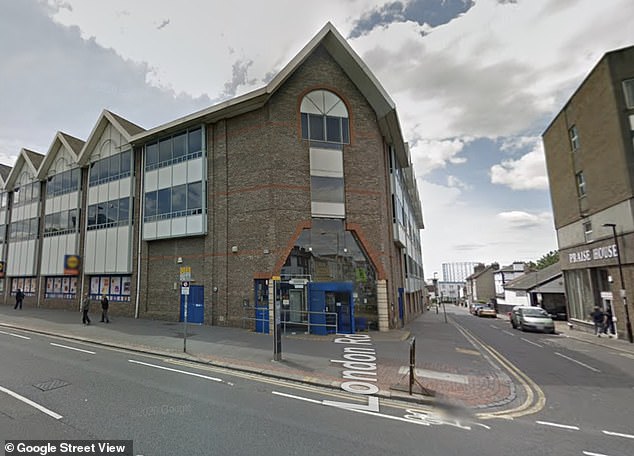 A young mother Miss Nzinga has now been awarded £2,500 after an employment tribunal concluded she had been victimised by executives at Straight Talking Peer Education (STPE)

The young mother has now been awarded £2,500 after an employment tribunal concluded she had been victimised by executives at Straight Talking Peer Education (STPE).

A hearing was told Miss Nzinga was employed at the charity – which provides teenage pregnancy workshops in schools – as a ‘peer educator’ from April 2016.

The tribunal was told that the majority of parents which the London-based charity has supported, employed and mentored have been of black ethnic origin.

However, in the summer of 2018 Ms Pannack – the most senior manager in the organisation – was accused of racism, the panel heard.

Among the complaints was Miss Nzinga’s report of an incident in August of that year which she said made her feel ‘uncomfortable’.

Following her complaint, Ms Pannack was found to have breached the charity’s equality and diversity policy and was issued with a written warning. She was later suspended.

The tribunal in Croydon, south London was told that a new senior executive was brought in, Brian Van Du, who effectively took over the running of the organisation in her absence.

Ten days after Ms Pannack was disciplined, Miss Nzinga and several colleagues were suspended for alleged bullying and harassment relating to a meeting they had held with Mr Van Du.

But in January, Miss Nzinga launched another grievance claiming that by being suspended she was being bullied herself. However, the charity did not investigate her claims.

Instead – despite Miss Nzinga being cleared by the disciplinary process and allowed to return to work in March – the tribunal heard senior executives began to discuss between themselves how they could get rid of her.

In particular, Company Secretary John Botterell believed she should be sacked because she had refused to continue working with Ms Pannack, the panel found.

‘In our view, the reason for that sentiment clearly relates back to the complaints (Miss Nzinga) made about racially offensive comments by (Ms Pannack),’ the tribunal concluded.

After she came back to work, Miss Nzinga told the tribunal her role had been changed and there was a dispute about how much holiday she was owed. She went off sick through stress the following month and in May she resigned.

In a letter to the trustees, she wrote: ‘It is with a heavy heart that I have to inform you that I will be resigning from Straight Talking Peer Education effective immediately, due to poor management of the way I am treated by the CEO, COO, and trustees.

‘My time at STPE has caused an enormous amount of stress, anxiety and contributed to a lot of issues in my life, I see no other choice but to leave.

‘I came to STPE to gain skills and to be empowered as a young parent but that is not the lesson I am leaving with.’

The panel, chaired by Employment Judge Adenike Balogun, said that the charity had come to view Miss Nzinga as the problem, not Ms Pannack.

‘(Mr Botterell) wanted to dismiss on grounds that there had been an irretrievable breakdown of the working relationship and relied on (Miss Nazinga) having said that she would not work with (Ms Pannack).

‘However, we are not convinced that (he) genuinely believed this amounted to an irretrievable breakdown in the relationship with (the charity).

‘(Miss Nazinga’s) unwillingness to work with (Ms Pannack) was because of the matters raised in the 2018 complaints.

‘(Ms Pannack) had been found guilty of inappropriate remarks breaching the company Equality and Diversity policy (and most probably the Equality Act 2010).

‘Yet despite this, Miss Nzinga and her colleagues) were seen by the respondent as the problem that needed solving, rather than (Ms Pannack).’

The judgment observed that following Miss Nzinga’s departure, Ms Pannack successfully lobbied to have the 2018 finding against her reversed.

‘(Mr Botterell) said in his evidence that the decision was reversed because evidence had come up to suggest that the remarks alleged to have been made by (Ms Pannack) were not said,’ the panel stated.

‘We found evidence on this unconvincing.. When we asked what the new evidence was, he was unable to say.

‘We believe that the decision was reversed on (Ms Pannack’s) request to protect her reputation and potential legal liability and that of the (charity)..’

The tribunal ruled that the failure to investigate Miss Nzinga’s January 2019 grievance had been deliberate and concluded she had been victimised by the company. She was awarded £2,499.83 in compensation.

Further claims of constructive dismissal and race and sex discrimination and harassment were dismissed.