By Ian Begley For The Irish Daily Mail

A shocking video has emerged of a woman being pushed on to the train tracks of a busy junction in Dublin.

Gardaí have confirmed they are investigating the incident which prompted a wave of calls on social media for more to be done to tackle such mindless thuggery.

The startling footage shows a woman running to get on her train as a bunch of youths try to get in her way, with one of them lunging at her. 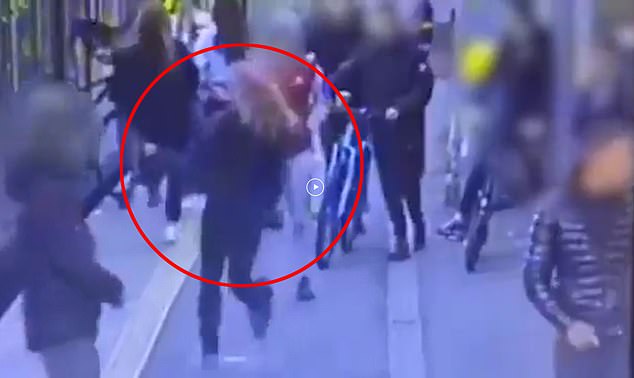 The woman, pictured centre, tried to dodge the youth wearing a red jacket at the station 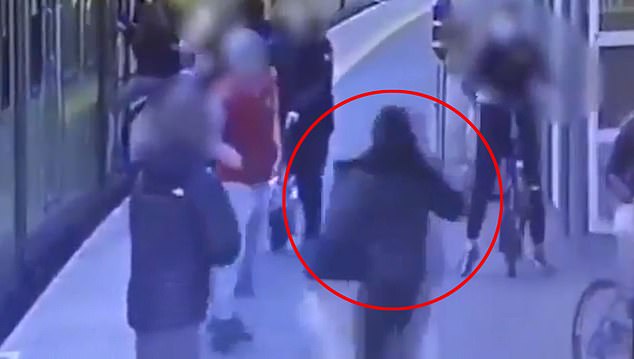 The thugs then target a second woman, circled, as she walks along the platform at Howth Junction in Donaghmede, Co Dublin 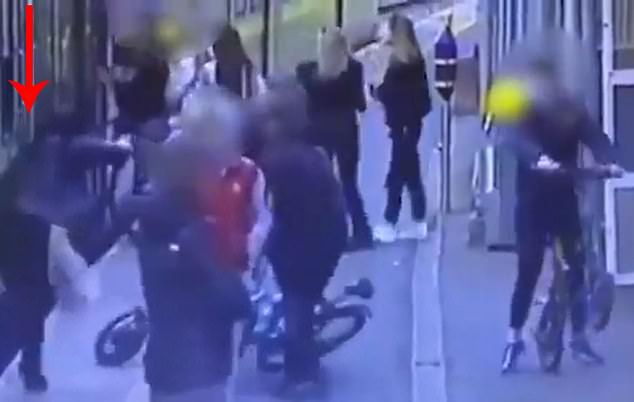 She swerves them but another woman behind her isn’t so lucky.

The same youth in a red jacket recklessly lunges at the second woman close to the gap with a stalled train.

She manages to keep her balance but then another youth uses his bike wheel to throw her off her feet, leading to her ending up falling off the platform and under the train.

The callous actions of the young mob were caught on camera at Howth Junction Dart Station in Donaghmede, north Dublin, on April 1.

As soon as the woman fell between the platform and stalled Dart, the hoodlums appear visibly shocked – with the boy in red throwing his hands up to his head. However, despite looking to be initially concerned, they then just stroll off.

Thankfully, a security guard and commuters helped the woman to safety and alerted the conductor to stop the train from departing.

Gardaí are now on the hunt for the youths responsible.

‘Gardaí are investigating an incident of assault that occurred in Howth Junction Dart Station on April 1, 2021, at approximately 9pm,’ a Garda spokesman confirmed.

‘A woman fell from the train platform during the incident and sustained injuries. An investigation is ongoing into this matter. No arrests have been made at this time.’

A spokesman for Irish Rail said the teens involved had been removed from the train by security prior to the disturbing incident.

‘As they [security guards] were ensuring access to a carriage for customers boarding, one member of the group removed caused a customer to be knocked between the train and platform,’ they said. 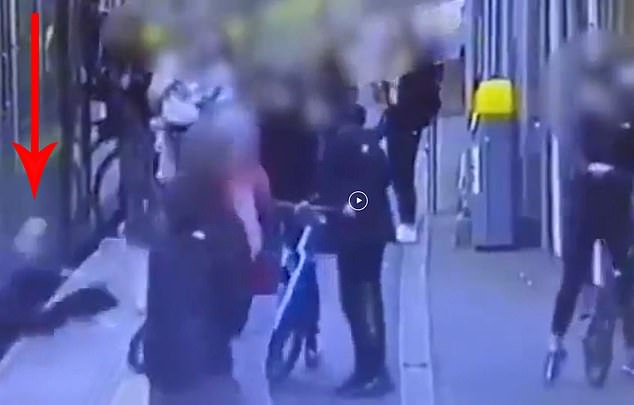 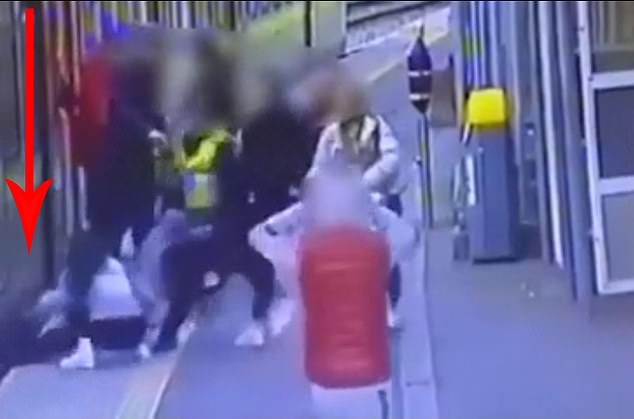 The thugs walked away after the woman fell between the train and the platform at Howth Junction station in Donaghmede, north Dublin 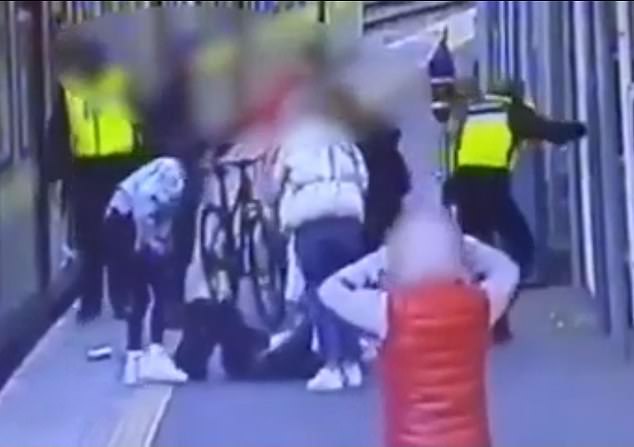 Security guards helped the woman to safety, while one of the thugs, wearing  a red jacket, right, held his hands to his head while he watched what was happening

‘Security were liaising with the driver to ensure the train did not depart, and the customer was aided back to the platform and was thankfully unhurt.’

The Irish Rail spokesman described what happened as a ‘disgraceful act’ in which there was potential for serious injury.

‘Gardaí were immediately alerted, and provided with CCTV to aid in identification of the culprits,’ he said.

‘We have had extensive operations established with gardaí in recent weeks in this area, to assist us in both Covid measures and to address anti-social behaviour.’

In recent years, Howth Junction has had issues with unlawful activity. In 2019, a schoolgirl was viciously mugged and assaulted at the Dart station by a gang of four youths. She was reportedly dragged off the train and on to the ground before being kicked and punched in the head.

In the same year, one complainant contacted Irish Rail after witnessing youths randomly attacking people on a train from Howth.