Horrifying video filmed by a shopper during Monday’s mass shooting at a Boulder supermarket shows bodies strewn in the parking lot and on the supermarket floor.

Ten people were killed during the tragedy, which occurred at the King Soopers store in the Table Mesa neighborhood shortly before 3pm.

The gunman has been identified as 21-year-old Ahmad Alissa.

Shopper Dean Schiller was standing outside the store when he heard gunshots ring out in the parking lot at 2.40pm.

He quickly began filming the unfolding incident on his smartphone.

Schiller’s footage, which has been uploaded to YouTube, shows two bodies lying in the parking lot of the supermarket. It’s unclear if those two victims were among the ten who were killed, or whether they were injured and survived.

One victim was seen on the ground around 10 meters from the front door of the store.

The second victim – who appears to be a middle-aged woman – was face down closer to the building’s entrance. 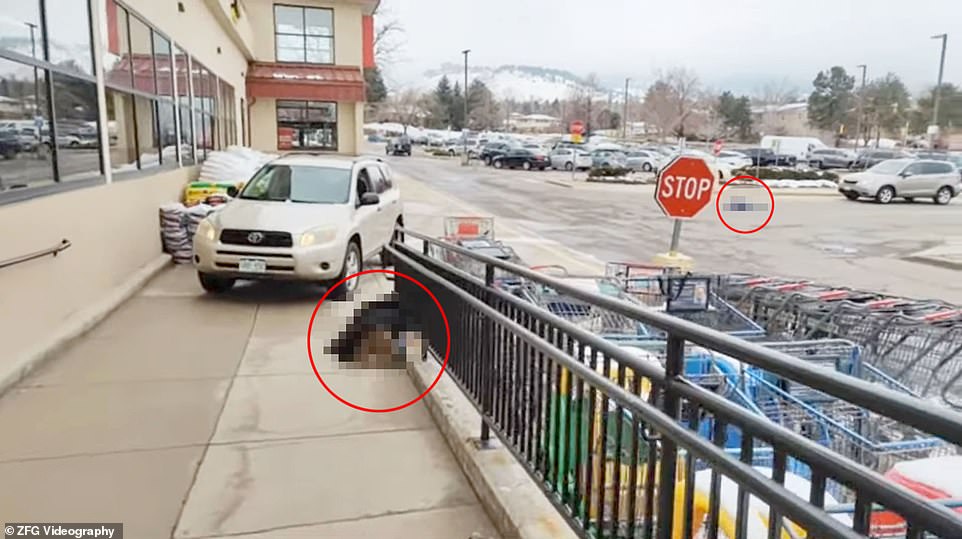 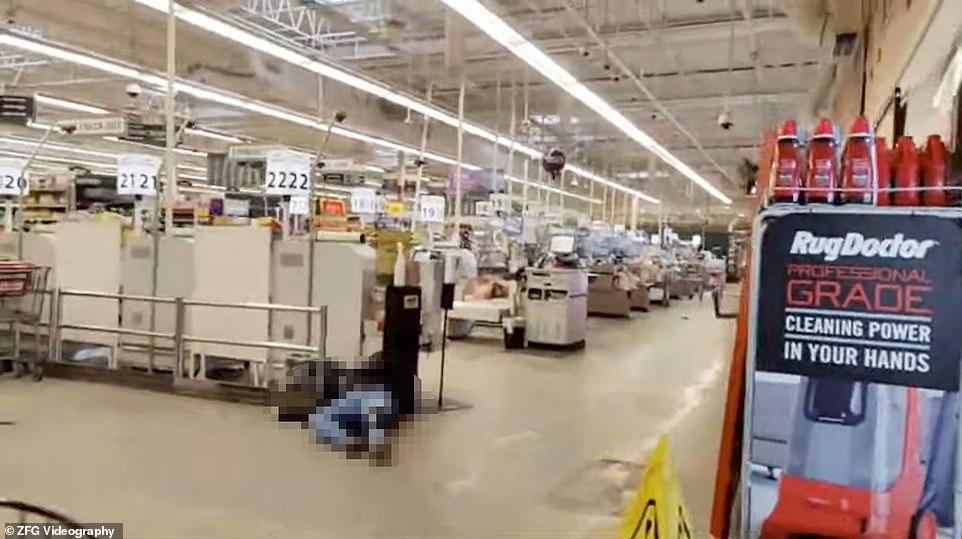 Ten people were killed during the tragedy, which occurred at the King Soopers store in the Table Mesa neighborhood shortly before 3pm

‘There’s people lying in the f**king street,’ Schiller stated in his video.

A woman can be heard wailing in the parking lot off camera, seemingly stunned by what she had just witnessed.

Schiller then entered the store,unaware that the shooter was still gunning down people inside.

After entering the front of the building, he noticed a third victim slumped on the ground, having been shot by the gunman.

Two more gunshots could then be heard echoing out from inside the store, prompting Schiller to flee.

‘Holy s**t! I’m getting away guys,’ he narrated as he fled around the back of the supermarket.

He continued filming for several more hours, documenting police descending on the scene.

Officer Eric Talley, 51, was one of the cops who was called to the supermarket. He was shot dead inside the store. 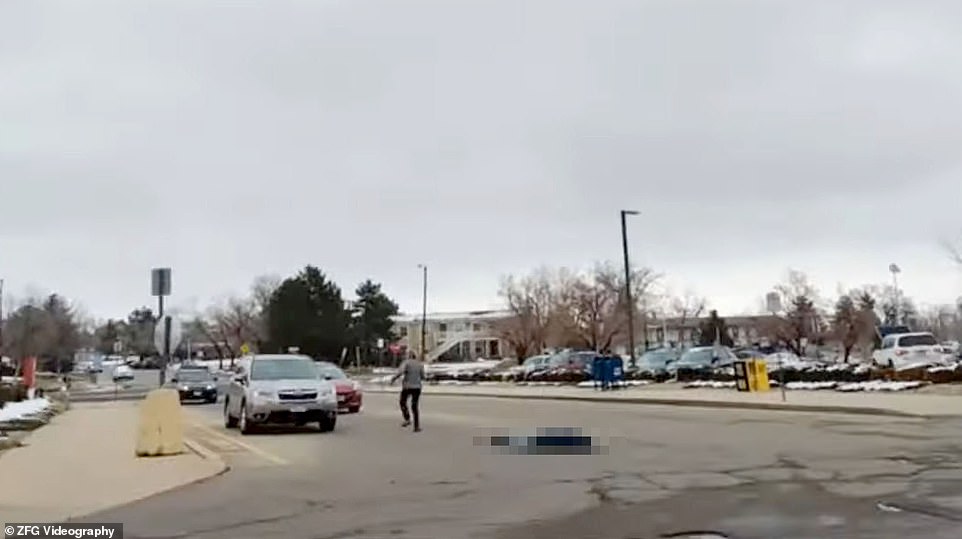 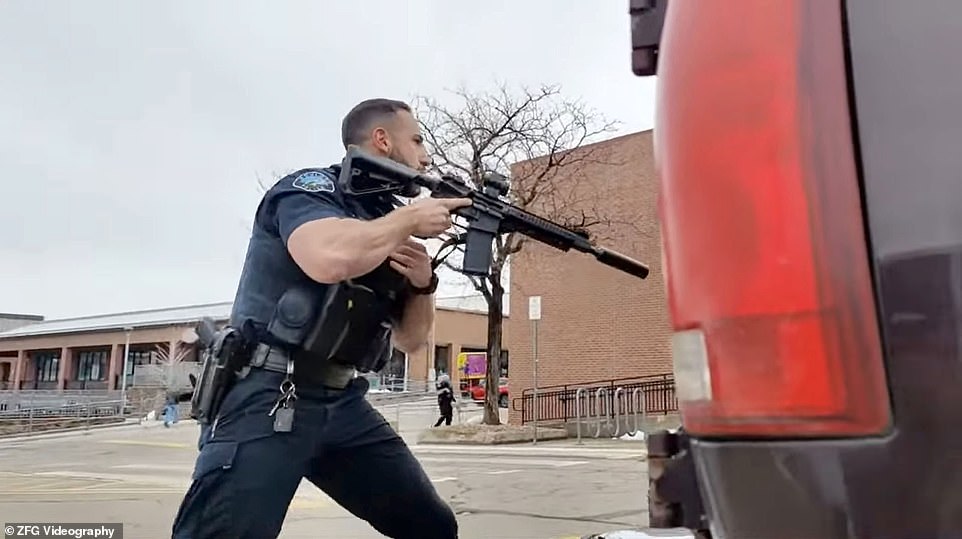 The suspect, Ahmad Alissa, was later brought out of the supermarket, shirtless and in handcuffs. He had been shot in the leg.

Alissa is now in custody and has been charged with 10 counts of murder.

He was transported to the hospital to be treated for injuries. He is now in a stable condition and has been charged with ten counts of murder.

Schiller’s video footage could be used as important evidence to piece together Alissa’s movements.

It appears he gunned down the two victims in the parking lot first, before entering the building and shooting a third person.

Inside, he then shot at least seven more people. 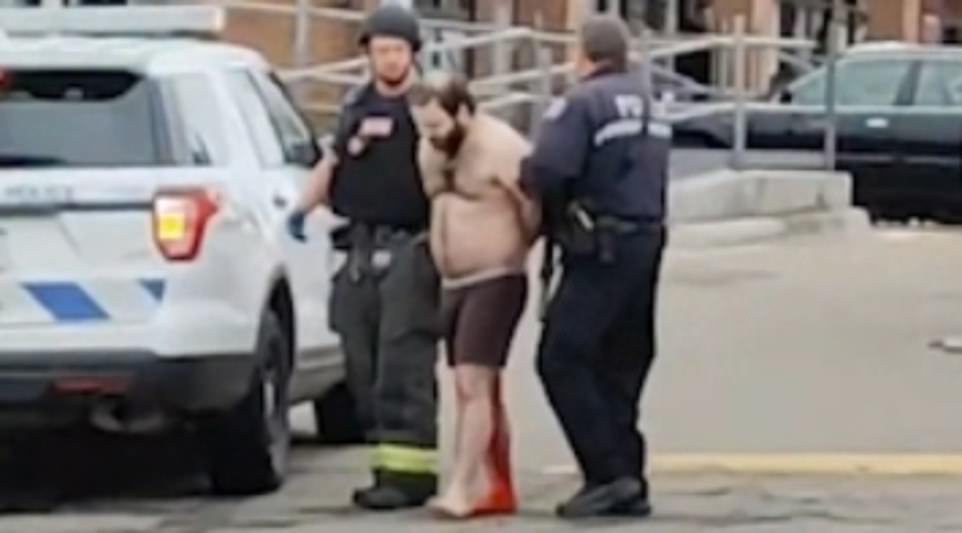 An injured man is shown being arrested at the store after the shooting on Monday. Police won’t confirm yet that this is the gunman but the shooter was the only person injured, and this man was taken to the hospital in handcuffs 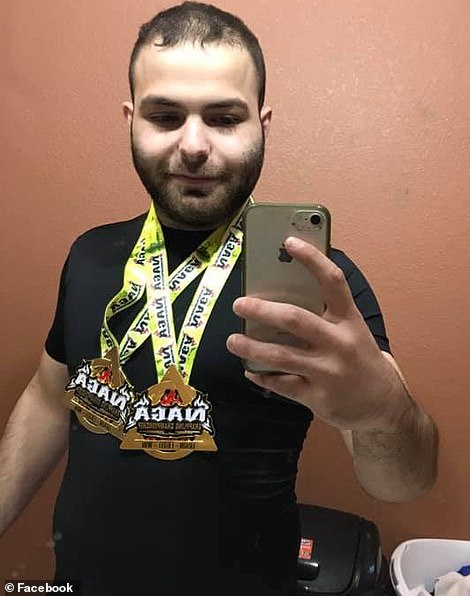 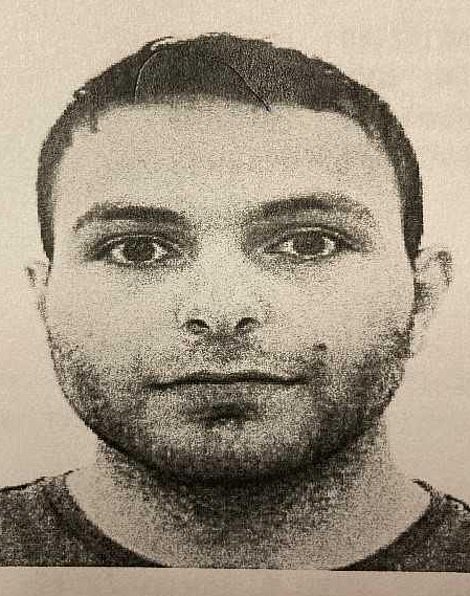 Ahmad Alissa, the 21-year-old gunman from Monday’s shooting at a Colorado grocery store

Officer Talley, who was a father-of-seven children aged between 5 and 18, was the first victim to be identified.  who was the first to respond.

Rikki Olds, 25, was also named as one of the victims.

Boulder cop and father-of-seven. One of the first on the scene

It’s unclear if she worked at the store or if she was shopping.

In addition to Schiller’s video, other witnesses have also spoken to the media, describing the terrifying incident.

Nevin Sloan, who narrowly escaped with his wife Quinlan, said panic then set in as shoppers were forced to decide whether to stay put or make a break for the exit.

‘All of a sudden we started hearing more, like ‘bang, bang, bang, bang’ and I sprinted over to her and just told her ‘hey we need to get out of here’,’ he told CBS, saying they had helped others flee through an emergency exit.

Sarah Moonshadow told the Denver Post that two shots rang out just after she and her son, Nicolas Edwards, finished buying strawberries. She said she told her son to get down and then ‘we just ran’.

Once they got outside, she said they saw a body in the parking lot. Edwards said police were speeding into the lot and pulled up next to the body.

Another witness told the paper that the gunman ‘just came in and started shooting’.

Meanwhile a grandfather described the ‘traumatizing’ moment his son-in-law and two granddaughters hid in a closet when the gunman opened fire.

The grandfather, who identified himself as Steven, said his son-in-law was in the King Soopers pharmacy to get a Covid-19 vaccine with his granddaughters, aged 13 and 14, when the shots went off.

‘There was shooting, and he saw it and got the girls down,’ he told NBC. They ran and hid upstairs in a coat closet for an hour, in the coats.’ 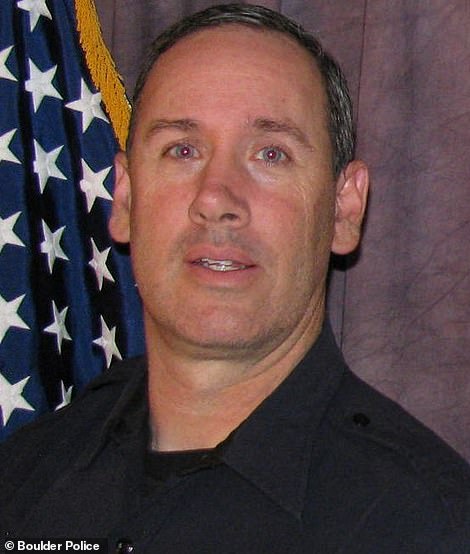 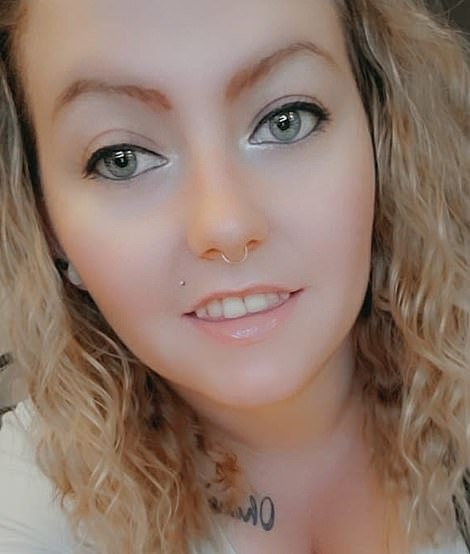 Victims: Among the 10 people killed was hero cop Eric Talley, 51, and 25-year-old Rikki Olds, right, who was identified by family 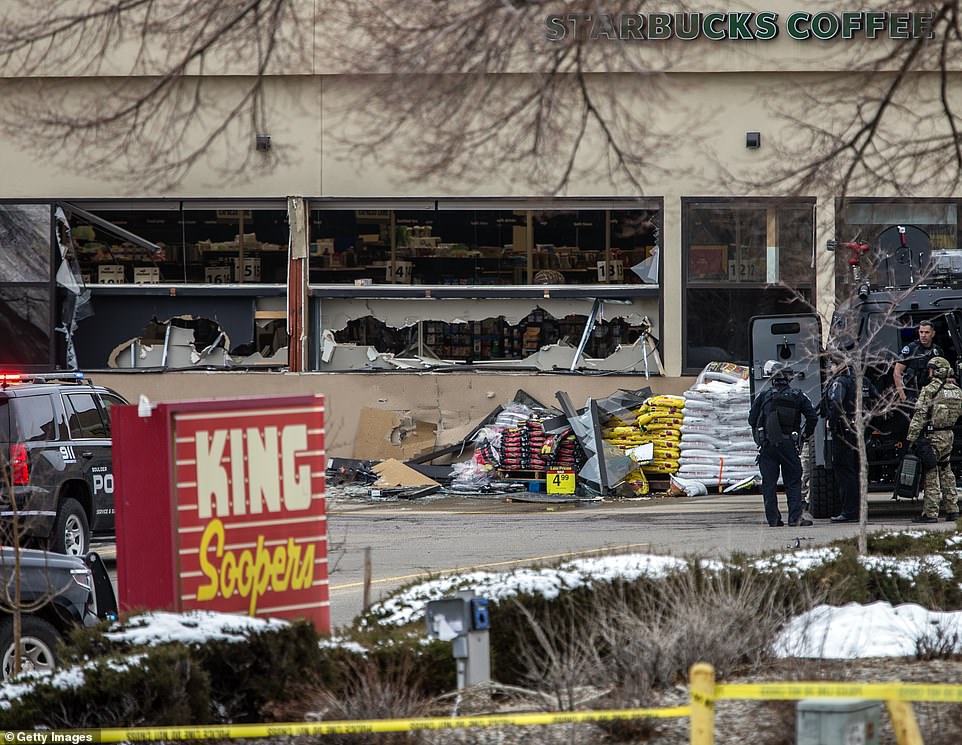 2.49pm: Police scanners pick up first reports of the shooting.

The frantic callers describe a white gunman firing at people in the parking lot.

2.59pm: Officer Eric Talley, one of the first on the scene, is killed

Over the radio scanner, cops are heard yelling: ‘Shooter inside! He just shot at us twice!’

Another said: ‘Officer down inside the building’

3.21pm: Police stop reporting that they’re being shot at.