Parents and former students have jumped to the defence of a teacher after he was criticised for telling kids they must wear gender-appropriate clothes at an upcoming school social.

The Year 12 Coordinator at Cardijn College, a Catholic school in Adelaide’s south, told parents in an email that male students should not dress as females at the event called ‘Ties and Tiaras’ at a retreat to kick off the new academic year.

‘Don’t bother accusing me of being sexist because boys don’t wear dresses in normal everyday life,’ Michael Herbert said in the email, after some male students had worn female outfits in recent years.

The directive sparked anger among some, with South Australian Greens MP Tammy Franks saying it was an out-of-date viewpoint.

‘It’s the 21st century, these sorts of things are surely relics of our past,’ Ms Franks said.

An unnamed parent interviewed by Channel Seven agreed, saying ‘it’s very old-fashioned in this day and age, it’s not appropriate’.

However parents, students and alumni have defended Mr Herbert, calling him ‘the most selfless individual.’

WHAT THE EMAIL SAID

A number of people have contacted me for clarification. Women wear shirts and ties in normal life. That will not be a problem on retreat.

Don’t bother accusing me of being sexist but men do not wear dresses in normal everyday life. That will not be acceptable on retreat. This was the exact issue that was brought to my attention a number of times today.

Please email me if you need to comment on your plan.

‘Though admittedly his wording of the email was blunt, the context behind it is important. Each year he would be asked the same thing by students, “Can I dress as a girl?” and vice-versa,’ said former student Corey O’Dwyer.

‘Being a Catholic College, the school disallows cross-dressing at these extra-curricular events, and Mr Herbert would always be the one to hear about these complaints, year in and year out.’

‘The email on its own looks bad, but with any sort of context or experience with the man, it is apparent that he is the least likely person at that school to discriminate against people.’

‘He’s the most selfless individual I’ve ever come across, he would do anything and everything to provide support to his Year 12’s,’ former student Jonathan Arnold-Janz said.

‘He spent countless hours helping any Year 12 student who came to his office with issues regarding mental health, educational hardships and more,’ he said. 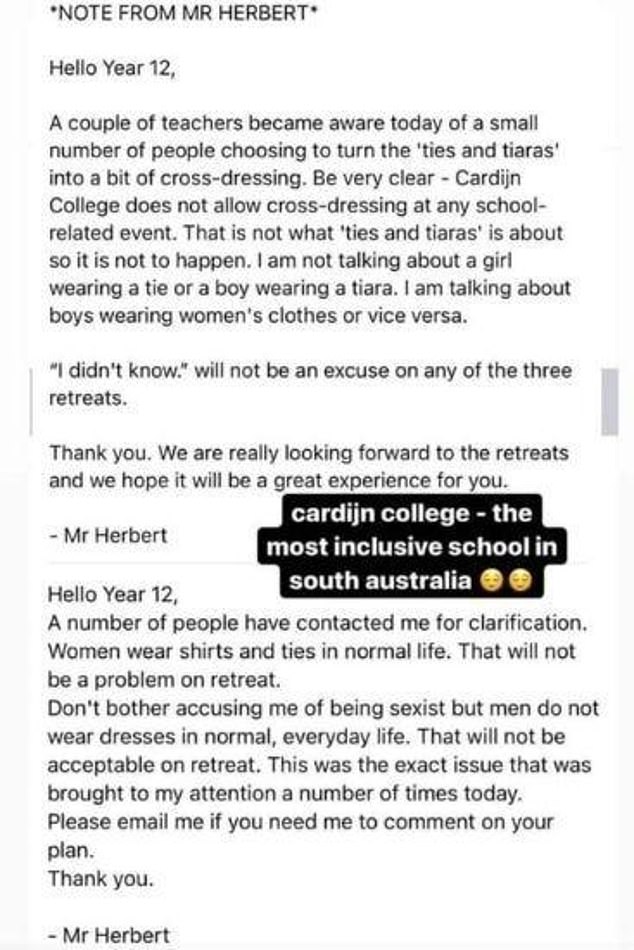 Teacher Michael Herbert who wrote this note to Year 12 students, who have defended him

‘He is there for anyone who needs him at Cardijn College, regardless of race, religion, sexual orientation.’

The ban on ‘cross-dressing’ was not enforced on female students, who were allowed to wear traditionally male attire.

‘Women wear shirts and ties in normal life. That will not be a problem on retreat,’ the email read. 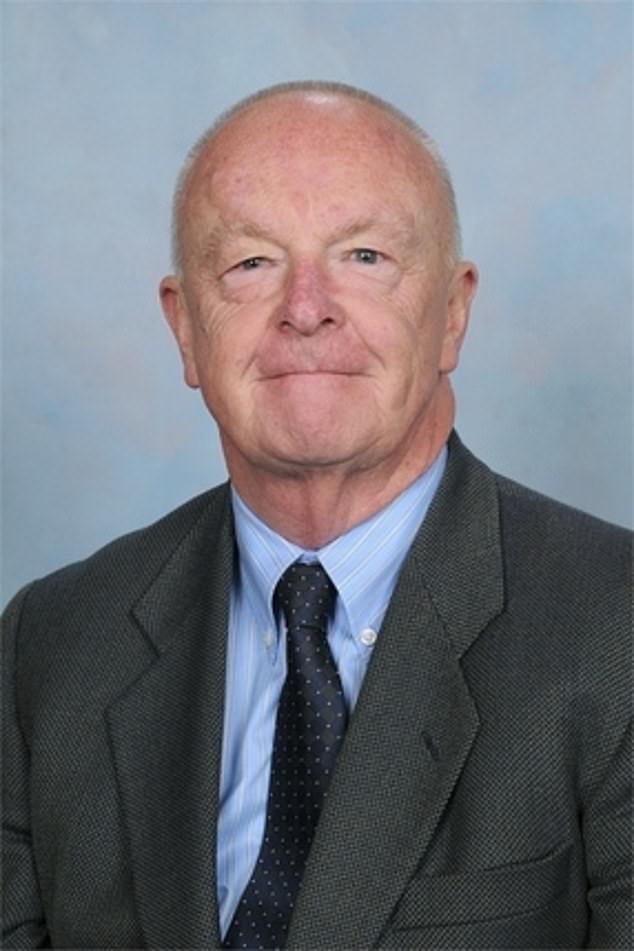 Parent Jacquie Meynell, who has one daughter who has graduated and another currently in Year 11, called Mr Herbert ‘a kind, caring and supportive educator’ who helped her daughter during a challenging year.

She said she believed the boys who wanted to wear dresses were not genuine, and instead did it to mock transgender people.

‘The students who were planning to wear the dresses were not doing it because the identify as LGBTQI, but rather they were doing it for a laugh,’ she said.

‘This would then send a message to anyone who does identify as LGBTQI that they are seen as a joke.’ 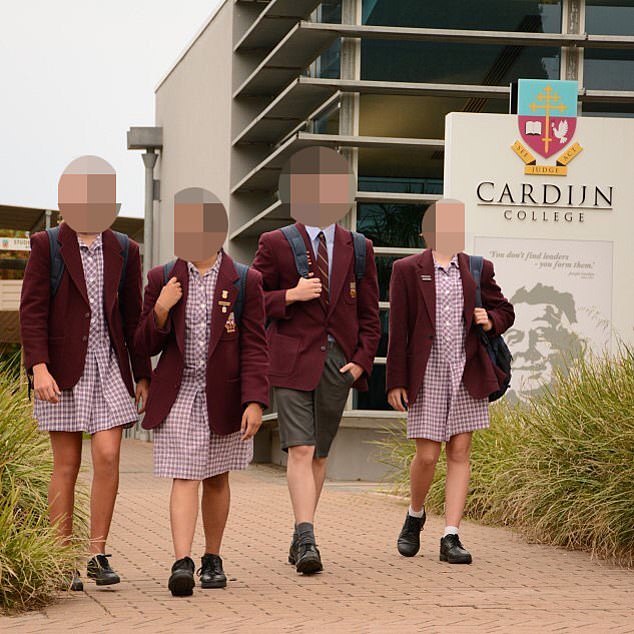 The Catholic school, Cardijn College in Adelaide, does not allow cross-dressing for boys

‘The school meets with every student at the point of application and talk to them about the uniform,’ said parent Karina Major.

‘I have no issues with the uniform and am aware that if there are students that are transgender, uncomfortable in wearing the prescribed uniform the school are flexible around this,’ she said.

‘I cannot say I have or am aware of any of the male students wanting to dress differently to the intended uniform and am unsure if this would be an option.’ 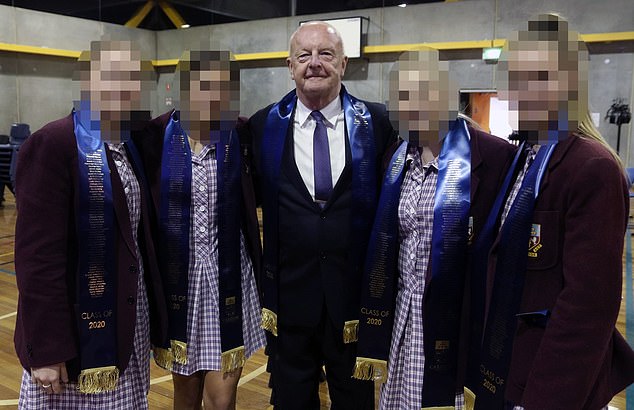 The school’s uniform policy as stated in its handbook allows girls to wear trousers in winter, but does not indicate that boys can wear skirts or dresses at any time of the year.

The policy also says summer dresses must hit the back of the knee when kneeling or mid-calf in winter, and girls are only permitted minimal jewelry and make-up.

In one photo, Mr Herbert himself donned a dress as he read a book to students at an ATHON fundraising event in 2019, which a graphic by the school said raised at least $16,000. 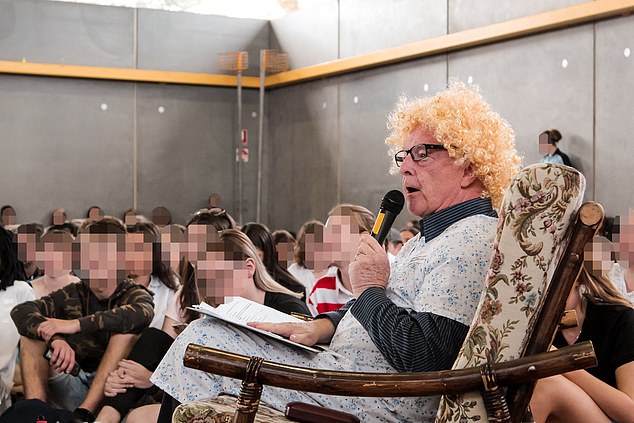 Despite the support for Mr Herbert from students and parents, principal Paul Rijken still apologised for the email and said the college is ‘a place of welcome and inclusion.’

‘The intention of the email was never to offend or cause distress to anyone, rather to communicate the dress code for the occasion, a school event,’ he said.

‘We apologise unreservedly to anyone who has been offended by the email.

‘Our old scholars are highly-engaged and empowered to speak up about any concerns they have and we have been in contact with many of them who have shared their thoughts with us.’