Britain’s Covid deaths plunge by 75% to 17 in lowest daily figure since SEPTEMBER while cases rise by 5% to 5,342 (but TWICE as many tests were carried out yesterday)

Britain’s daily Covid death toll has plunged by three-quarters in a week to the lowest number of fatalities since September before the second wave spiralled out of control.

Department of Health data showed 17 people succumbed to the virus today, below the 64 recorded at the same time last week. It was also the lowest number since September 28 when health chiefs announced 13 deaths.

And a further 5,342 Covid infections were also registered in the last 24 hours, which was a five per cent rise on last Monday when officials declared 5,089 new cases.

But it came as ministers continued to carry out more than double the number of tests to allow schools to reopen. The positivity rate – one of the best measures of the outbreak when more swabs are done – is still dropping across all regions.

It comes amid reports Boris Johnson will offer the European Union a ‘share’ of millions of doses of the AstraZeneca jab made at a Dutch factory as he warns a third wave of the pandemic could also ‘wash up our shores’ from Europe.

The Prime Minister is trying to defuse a jabs stand-off with EU chiefs, amid the bloc’s bungling roll-out and the decision of 19 member states to stop dishing out the AstraZeneca jab over unproven blood clot fears. Europe is also facing a third wave of the pandemic, which Mr Johnson fears could hit the UK. 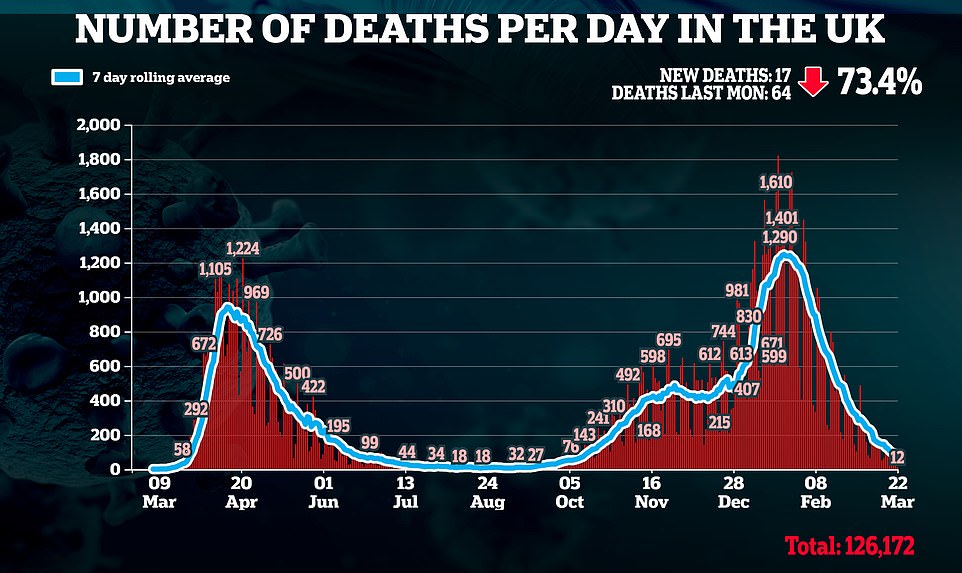 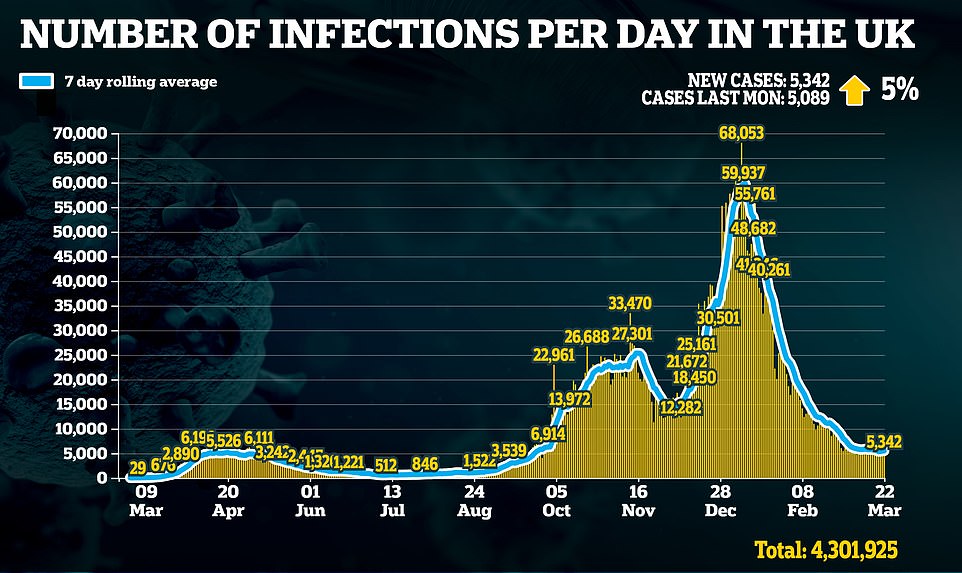 The Prime Minister warned today that ‘previous experience has taught us that when a wave hits our friends, it washes up on our shores as well’ and said the UK’s best defence was to keep vaccinating at full speed. Infection numbers are surging again in major countries across the channel, including France, Germany, Belgium and the Netherlands but, for now, they remain flat and low in the UK, which has a far better vaccine programme.

Mr Johnson’s comments come amid growing fears the EU will push ahead with an extraordinary export ban on Pfizer and AstraZeneca jabs made on the continent, in a move which could delay the UK’s rollout by months.

The row appears to be centred around a factory run by the firm Halix in Leiden, Netherlands, which has promised supplies of the AstraZeneca jab to both the UK and Europe but is not yet an approved supplier to either so none of its goods can be used. Halix has already shipped a batch of unknown size to Britain, MailOnline understands, and is reported to be in possession of five to 10million more doses that the EU and UK are now wrangling over.

European chiefs are threatening to shut down exports if they don’t get priority access to vaccines made on their turf, regardless of companies’ agreements with the UK, so Downing Street is considering offering some of the supplies as a compromise, The Times reports.

Rows over vaccine supply have erupted after Britain set up side deals with factories abroad to boost supplies and the PM must now appeal to other leaders to resolve the crisis. He spoke with EU heavyweights Angela Merkel and Emmanuel Macron last night to try and persuade them to soften their stance and has also sent Lord Lister, a government ally, to India to ease tensions over the delay to a batch of five million UK-bound doses of the vaccine.

Britain’s bargaining chip is its ability to cut off supplies of a crucial ingredient for Pfizer’s vaccine – the fat blobs that are used to carry the vaccine material are made in a factory in North Yorkshire, and ministers have privately admitted the UK could stop these being shipped if left with ‘no choice’.

But rifts are already emerging within Europe and leaders already disagree on what to do. Irish PM Michael Martin said blocking vaccine supplies would be ‘a very retrograde step’ and added ‘I’m very much against it’.