Incredible footage shows the moment three brave curlew birds puffed up their feathers to protect their baby from a giant python.

The stand-off was filmed by Tash Cotter in Dripstone, near Darwin in the Northern Territory, who marvelled and the tenacious animals.

How brave are these curlews?! 😲🐍 Check out this stand-off between a snake and a group of bush stone-curlews near Dripstone, NT. “Fierce protective parent crew right here” ❤️ 📹 Tash Cotter (@tashysgirls), thanks for sharing! 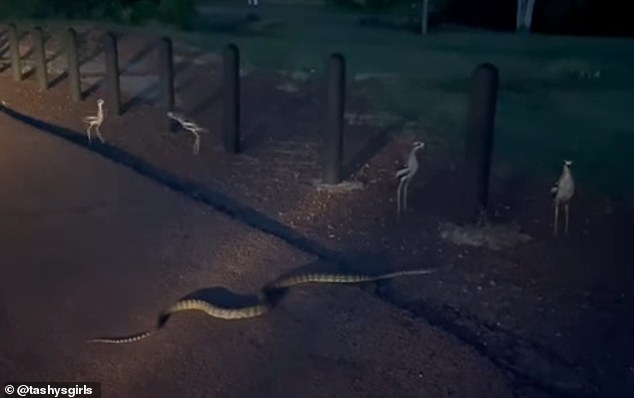 Pictured: The moment a python moved towards a group of curlew birds in the Northern Territory

In the video, which was shared by the ABC, the serpent could be seen slithering across a road towards the family of four bush stone-curlews.

As one bird chased the baby behind the flock and out of harms way, another stood in front of the snake and protectively spread her wings.

The other two adult curlews joined her, spreading their wings and puffing their feathers to make a wall between the python and the youngster. 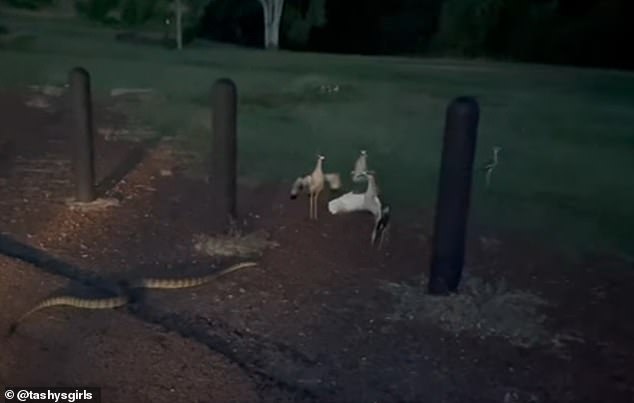 Pictured: Three curlew birds fiercely protecting their young from being eaten by a python

They have a varied diet, but prefer to feed on insects, molluscs, small lizards, seeds and small mammals.

They used to be common, but the population has declined through loss of habitat and predation by foxes and feral cats.

Bush Stone-curlews can be found throughout Australia.

The snake showed no signs of backing down and slithered within inches of their legs, but the birds fiercely stood their ground.

As the python continued to move towards them, the family darted to the side while still protecting the baby bird.

Viewers were in awe of the brave display, and share their own experiences with curlews.

‘When I went to Cairns there was a curlew that joined me for breakfast every morning. He walked right in and sat at the table,’ one woman wrote.

‘That is a brave snake… never mess with a curlew!’ another said.

‘You don’t want to mess with those birds on their nesting ground, they attacked me there once,’ someone else shared.

‘A python would love to eat a curlew,’ he said.

Bush stone-curlews are not usually aggressive, but will fight to protect their eggs and young.