Savers hunting a new home for their tax-free cash could grab a bumper best buy rate from Nationwide Building Society.

Finding a savings rate paying more than 1 per cent is incredibly hard in the current climate, but Britain’s biggest mutual is doing just that – if you can jump some hoops.

Firstly, you need to be an existing customers and secondly, transfer more than £10,000 from another provider. 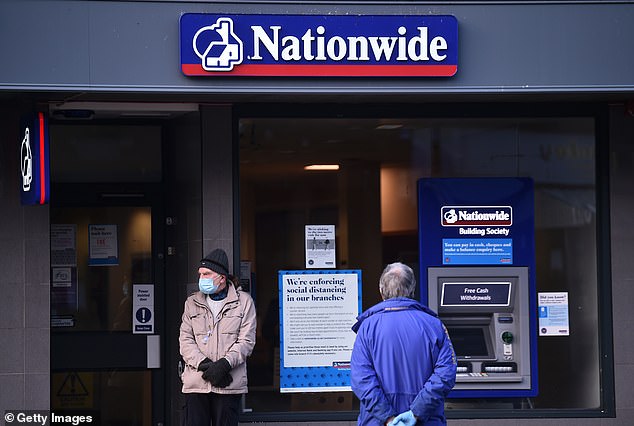 The 18 month fixed-rate Isa comes a few weeks before the end of the tax-year and has 0.75 per cent rate.

This itself beats every rate in the independent This is Money best buy tables up to the best three-year fixed-rate deal offered by Shawbrook Bank.

However, for those transferring more than £10,000 and bagging the £50 bonus, the total return is closer to 1.1 per cent – a rate that can just about be beaten elsewhere by fixing for five years.

It can be opened online and in branch with a minimum of £1. It comes a fortnight after the building society launched a triple-access Isa paying 0.4 per cent for a year, which ranks second in our tables provided savers are happy not to make more than three withdrawals a year.

It was joined in the fight for Isa cash by Leeds Building Society, which launched an account paying 0.4 per cent that would allow savers up to four withdrawals a year. It can be opened with £5,000 by post or in-branch, and accepts transfers.

West Bromwich Building Society has also bumped up rates on its one and two-year fixed-rate Isas, both of which are now best buys, the rates for which can be found below.

Both of Nationwide’s new accounts accept transfers in, while the 18-month fixed-rate Isa also pays those who make a transfer of at least £10,000 £50 for doing so.

The announcements are rare rays of sunshine in an Isa season otherwise expected to be fairly gloomy after savings rates plummeted over the last 12 months.

And far from launching Isas to snap up savers cash as the end of the tax year looms, figures from Moneyfacts have also revealed the number of available Isas has fallen from 417 last March to 331 at the start of this month.

Meanwhile rates have fallen so far over the last 12 months that the average ‘old’ easy-access Isa rate pays more than the average on-sale one by a bigger percentage than has been seen in any March since 2013, according to figures from Savings Champion.

What are the best deals for non-Nationwide customers?

With just a few weeks to go until savers lose the remainder of their £20,000 annual tax-free allowance, here are the best cash Isa rates around:

It means non-Nationwide customers should be wary of transferring their old Isa, although the top rates in our best buy tables still beat the miserable rates paid by Britain’s biggest banks.

‘You certainly need to make sure you know what you are earning on an existing Isa before simply transferring, Anna Bowes, co-founder of the analyst Savings Champion, said.

‘There will still be shockers out there though, like all from the high street banks. You need to move if you’ve got one of these.’

The worst closed easy-access Isa rate pays 0.25 per cent, Bowes added, while on-sale Isas pay as little as 0.01 per cent.

The latest figures from the taxman found there was a resurgence in the popularity of cash Isas in 2018-19, with the number paid into increasing nearly 1.5million compared to the previous tax year.

Some £7.2million more was paid into cash Isas.

However, average easy-access Isa rates were 0.95 per cent in March 2019 and one-year and longer-term rates 1.37 per cent and 1.62 per cent, respectively, as the likes of Nationwide and Santander competed for Isa savings.

That is unlikely to be repeated this year with big banks already filled with savers’ cash and the Bank of England base rate at an all-time low of 0.1 per cent.

One savings chief at a challenger savings bank which pulled its Isa offers at the start of this month said: ‘It’s not looking very positive for savers. I suspect it’ll be a very quiet Isa season across the board this year.’