Travel writer Jo Kessel filmed her voyage on Holland America Line’s newest cruise ship, MS Rotterdam. The footage shows off the ship’s ‘more space per passenger’ credentials as well as its ‘Music Walk’, which features live music venues such as the exclusive Rolling Stone Rock Room. Plus, the video shares the inside scoop on where to eat, how to burn off those calories and offers a sneak peek inside the ship’s most expensive cabin, which costs £15,000 ($20,432) a week.

The distinctive navy hulls of Holland America’s cruise ships have long set them apart from other lines – as has their Dutch heritage.

Nearly 150 years ago the line began life by ferrying European immigrants from the Netherlands to New York. But a century later it switched to full-time global cruising and even though it’s now American-owned, by the Carnival Corporation, those Dutch roots are still tangible. 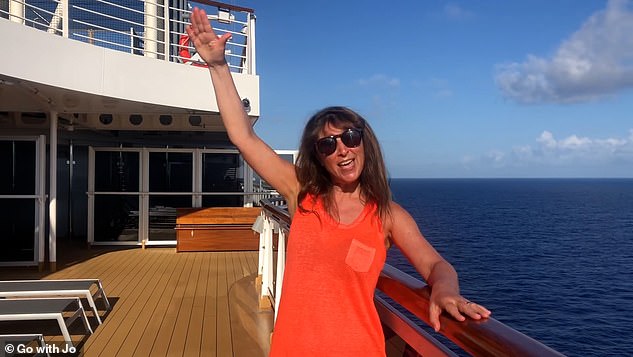 The 480-million-euro (£395million/$520million) Rotterdam is the eleventh ship in a fleet that prides itself on providing more open space per passenger than other liners.

I hoped to capture this roominess on film when I hopped on board for a seven-night Caribbean cruise from Fort Lauderdale and I think I succeeded.

The video starts at the swimming pools – there’s one at the back and one in the middle covered by a retractable roof reminiscent of Wimbledon’s. 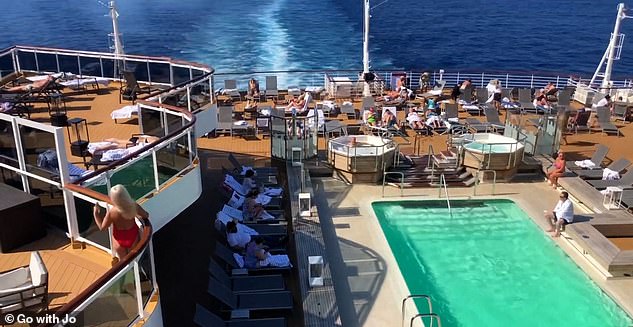 The above swimming pool, set in the middle of the ship, is covered by a retractable roof 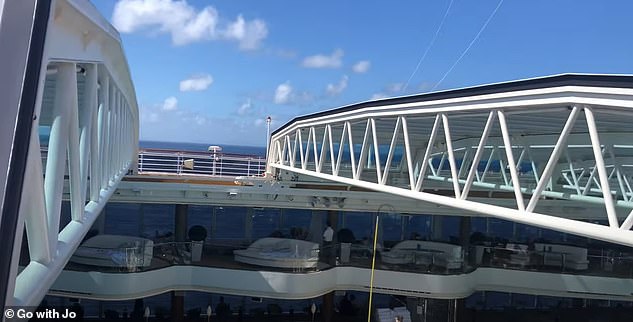 The retractable roof, pictured above, is ‘brilliant for inclement weather’, says Jo 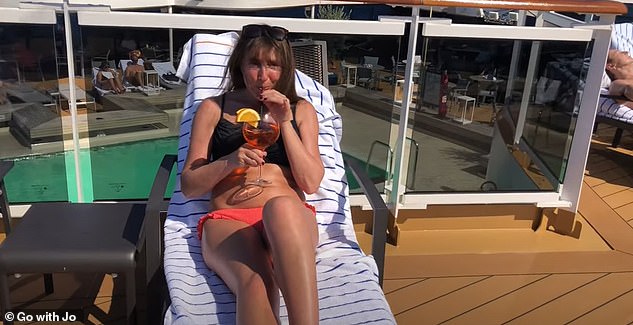 According to Jo, there was never a problem finding a sunbed during her seven-night cruise

This roof is a serious feat of engineering that transforms the area from an outdoor to an indoor pool at the flick of a switch. Brilliant for inclement weather.

It was even possible to have a whole pool to yourself, caught on camera!

Everywhere breathed, from the jogging track to the outdoor gym to the wraparound Promenade Deck where I was alone walking laps every morning for an hour. 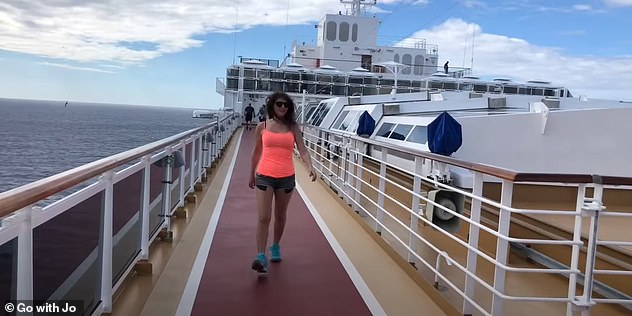 Jo on the ship’s jogging track. ‘I was alone walking laps every morning for an hour,’ she says 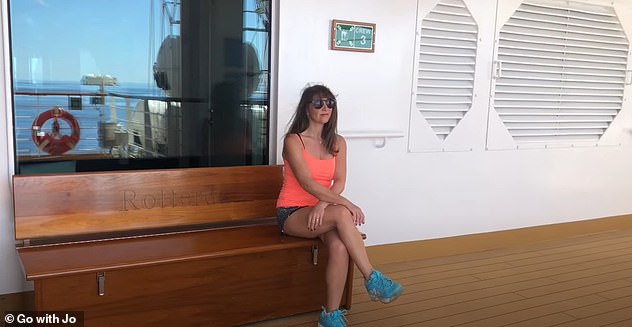 Jo soaks up the view from one of the polished, teak benches on the promenade deck on Deck Three

According to Jo, the ‘piece de resistance’ on the ship is the ‘gargantuan pickleball court’ (pictured) 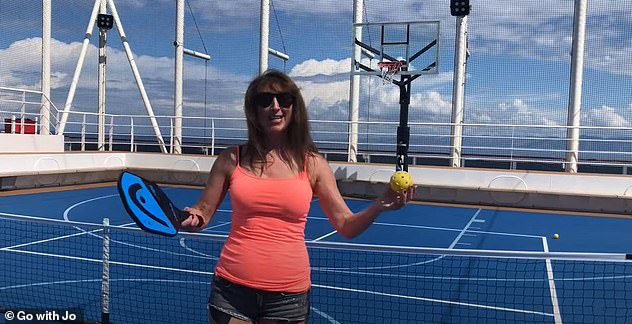 Pickleball is a racket sport hybrid of tennis, badminton and ping-pong played with a hard ball and solid paddle, Jo reveals

So many ships have done away with their Promenade Decks so it was a treat to find Rotterdam’s on Deck Three and to soak up the view from one of its polished, teak benches.

The piece de resistance was Rotterdam’s gargantuan court for pickleball – a racket sport hybrid of tennis, badminton and ping-pong played with a hard ball and solid paddle. The video sees me trying to scoop up the ball (top tip: it barely bounces) as well as lob it at my opponent. It’s an excellent, fun workout.

Rotterdam is a classy, arty ship with a musical groove – there’s a genre for every taste in its ‘Music Walk’. 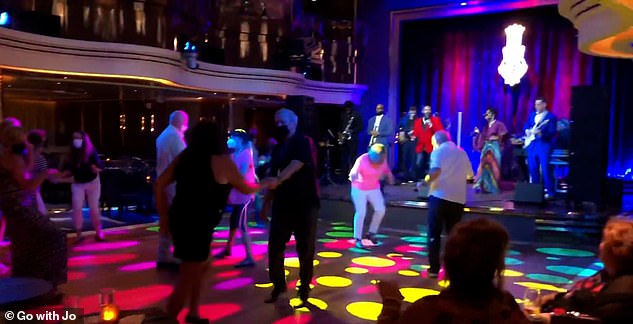 There’s a musical genre for every taste in the ship’s ‘Music Walk’ section, pictured above 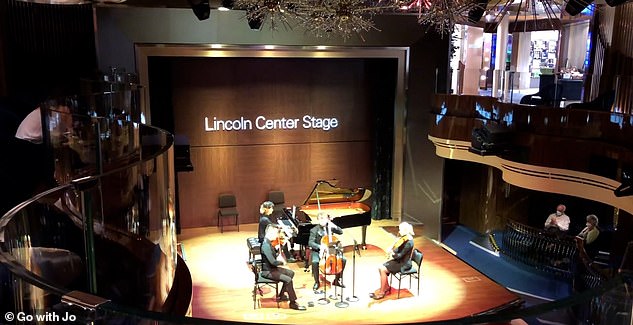 Above, a classical quartet performs at the Lincoln Centre Stage during Jo’s voyage This is an alley dedicated to live music venues, all showcased in the video. Fancy swaying hips to Hound Dog and Let the Good Times Roll? BB King’s Blues Club is the place to be.

For chart hits, there’s Billboard Onboard and a classical quartet performs at Lincoln Centre Stage. Then there’s Rotterdam’s exclusive Rolling Stone Rock Room, which plays rocking, booming tracks such as Queen’s Under Pressure. Most guests can’t resist a boogie.

Music’s even in the ship’s art (my favourite is a giant sparkly treble clef) and on the carpet leading to my cabin. 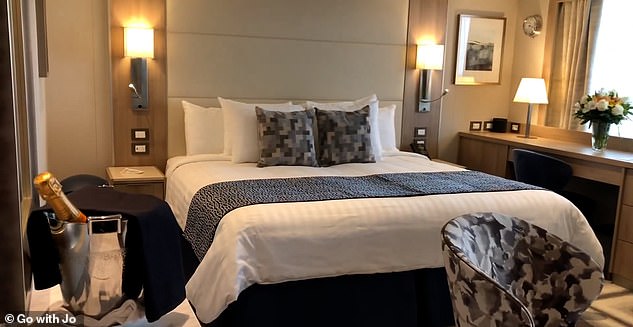 Inside Jo’s Neptune Suite which, she reveals, ‘is the epitome of roomy’ 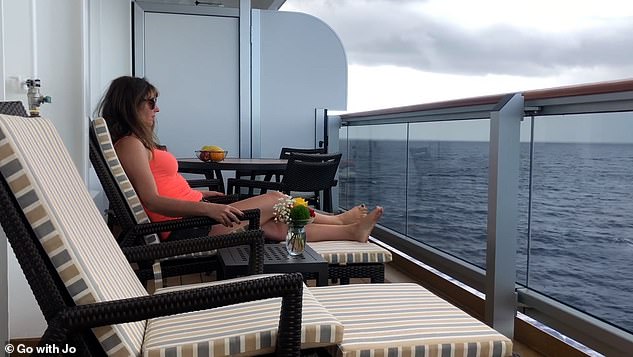 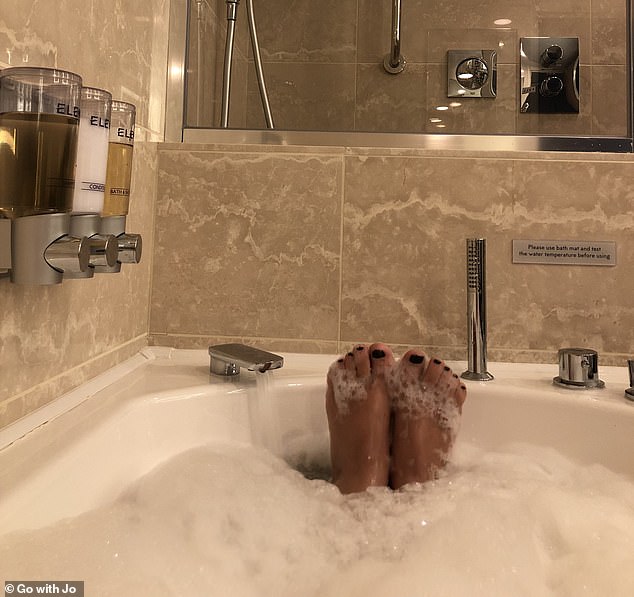 Jo enjoys a soak in the Neptune Suite’s bathtub, which has massage jets. ‘It felt like a private spa,’ she says 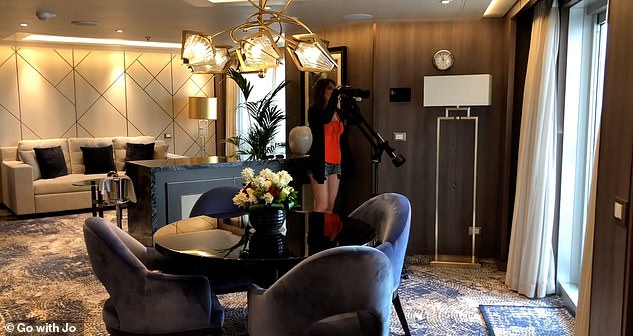 Jo was allowed a sneak peek into the poshest cabin on board, the Pinnacle Suite. Above, Jo looks through the suite’s telescope Mine was a Neptune Suite which, as the film shows, is roomy and deluxe, with a sumptuously large balcony and a bathroom featuring a bathtub with massage jets. It felt like a private spa.

To see what top dollar buys I was allowed a sneak peek into the poshest cabin on board, the Pinnacle Suite.

The remaining footage is dedicated to food and drink.

Cuisine is international and of a high standard from the buffet to the main dining room. 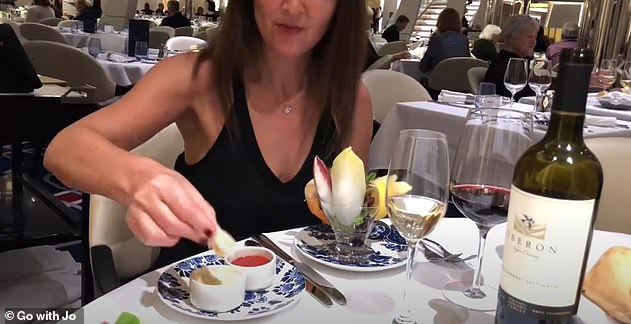 According to Jo, the MS Rotterdam’s cuisine is international and of a high standard across the board. Above, she tries the prawn cocktail in the ship’s main dining room

Dishes native to the Netherlands are included in the fare and served in Rotterdam’s Grand Dutch Cafe, pictured above 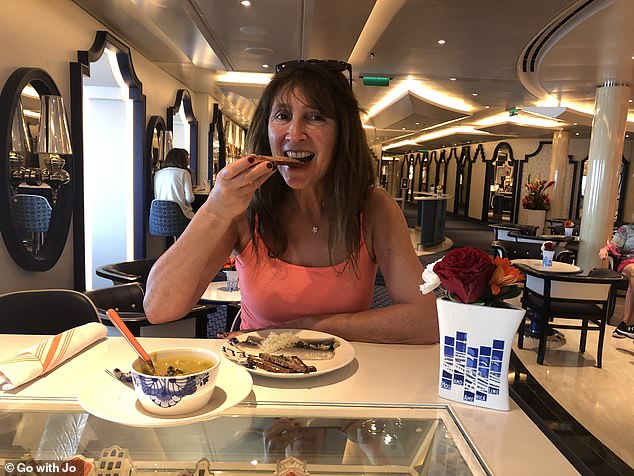 Holland America has found a winning formula. It offers space and tranquillity but has guests who know how to groove.

When the nightly live music starts playing there’s not a still toe or hip in the house. If music is good for the soul then so is a cruise on MS Rotterdam.

For more videos from Jo, visit her YouTube channel – Go with Jo. 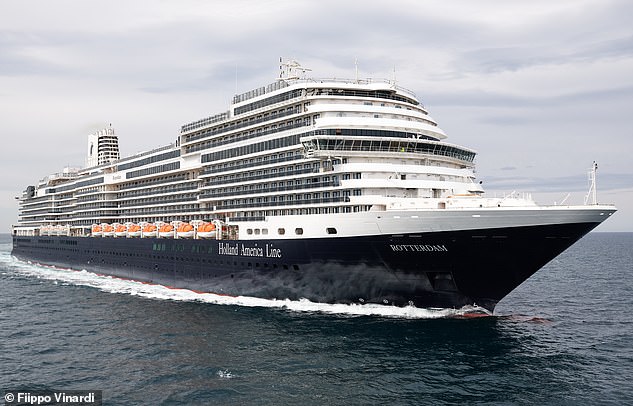 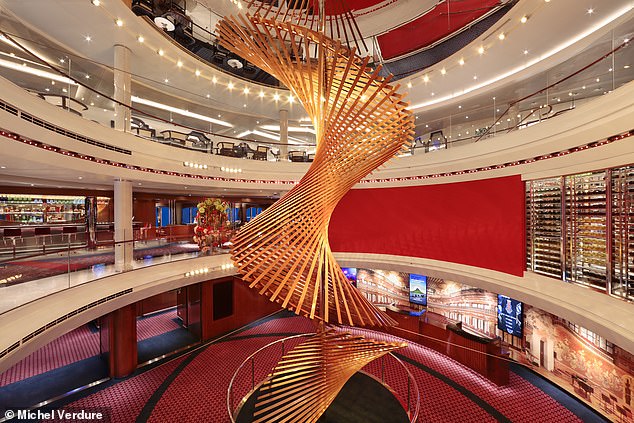 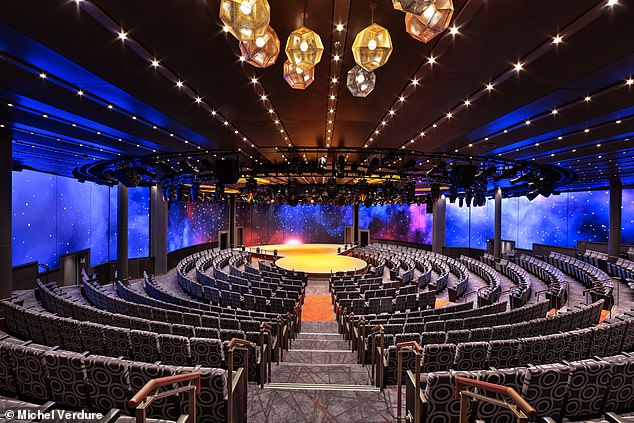 Above is the ship’s ‘World Stage’. ‘If music is good for the soul then so is a cruise on MS Rotterdam,’ writes Jo

MS ROTTERDAM BY THE NUMBERS