By Ian Birrell In Kyiv For The Mail On Sunday


Belarusian exiles have formed the first unit of foreign fighters taking up arms for Ukraine following President Volodymyr Zelensky’s call for a new international brigade to join their war against Russia.

They have set up a special unit in the Ukrainian army that is fighting to defend the capital Kyiv after scores of Belarusians flooded into the country to join the battle.

Their leaders have issued a warning to Belarusian troops massing on Ukraine’s northern border to either stay at home or join their side ‘fighting for freedom’ against both Russia’s president Vladimir Putin and his ally Alexander Lukashenko in Minsk.

Lukashenko hosted the Russian invasion forces and allowed his land to be used for missile launches. The veteran dictator has became reliant on Putin since crushing pro-democracy protests after a disputed presidential election result two years ago. 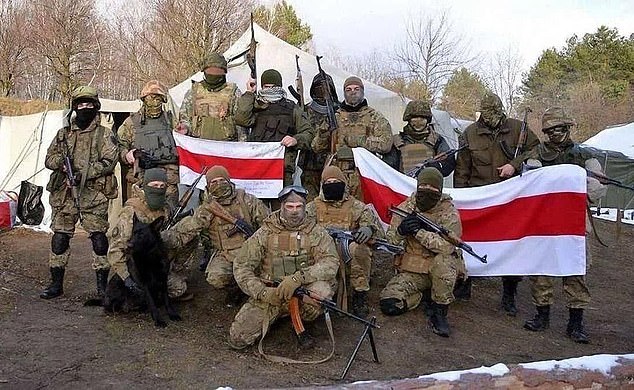 Belarusian exiles have formed the first unit of foreign fighters taking up arms for Ukraine following President Volodymyr Zelensky’s call for a new international brigade to join their war against Russia. Pictured: The unit stands with the white and red flags of Belarus

Some dissidents fled to Ukraine – but following warnings from US defence officials, there are fears that Lukashenko may send his own troops over the border to fight alongside Putin’s armed forces despite the despot’s firm denials on Friday.

Now Yan Melnikov, who has been fighting for the airfield in Vasilkyv, near Kyiv, has announced that he is heading the first unit of foreign volunteers in the Ukrainian armed forces with more than 50 recruits from his country.

‘We urge every Belarusian who has a desire to fight shoulder to shoulder with Ukrainians for the common ideals of freedom and the value of sovereignty to join us,’ he said in a video released by the nationalist Azov Battalion.

He was flanked by seven other armed Belarusian fighters. There have also been suggestions on social media that people fighting Lukashenko’s regime have been sabotaging rail and phone communications to frustrate the war effort.

Zelensky called for foreigners to join their fight at the weekend when announcing a new military unit – the International Legion of the Territorial Defense of Ukraine – to combat Putin. ‘This is the beginning of a war against Europe,’ he said.

Several British volunteers have declared their intention to sign up – although Boris Johnson has warned they could face terrorism charges upon their return. At least one Briton is thought to be encircled in fierce fighting around the port of Mariupol.

Melnikov, a veteran of the eight-year conflict with pro-Moscow separatists in east Ukraine, said 30 Belarusian comrades in Ukraine had been joined by newcomers arriving last week in the unit fighting under the Territorial Defence Forces, made up of military reservists.

‘We share the same concept of freedom as the Ukrainian people,’ he said. ‘But today Belarus is occupied by pro-Russian forces with a government totally under their control. Belarusian freedom depends on the freedom of Ukraine.’ 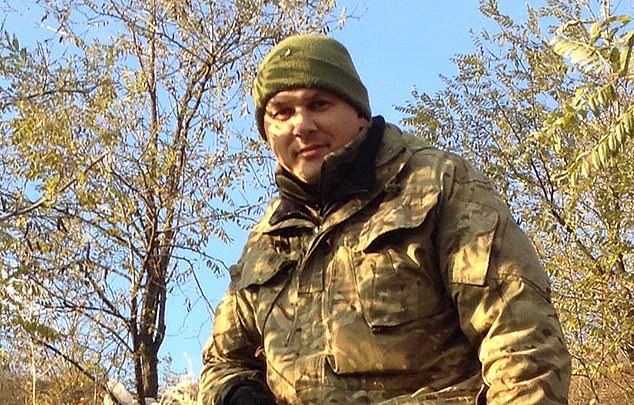 Pictured: Vadim Kabanchuk, a member of the special unit in the Ukrainian army that is fighting to defend the capital Kyiv after scores of Belarusians flooded into the country to join the battle

Other prominent Minsk activists have revealed that more than 200 Belarusians have joined other units of the Territorial Defence Forces in support of Kyiv.

Two of them have released a video appeal to Belarusian soldiers ‘not to follow Lukashenko’s criminal orders’, instead urging them to make ‘a moral choice’ to stay at home or alternatively to defect in Ukraine.

‘Guys, this is not your war, stay at home. If it happens that you are sent to Ukraine, surrender as soon as possible,’ said Vadim Kabanchuk, a former political prisoner, and Vadim Prokopyev, a former business owner. ‘Make the right choice.’

Prokopyev, who arrived in a convoy of seven cars from Warsaw on Monday, said that Belarusian recruits have been pouring over the Polish border in recent days to join exiles already in Ukraine.

‘The destiny of Belarus is going to be determined in this battle between the Russian world and the free people of Ukraine. This is our battleground too. If we win here, then the days of Lukashenko are numbered.’

By Chris Jewers for MailOnline

In a bizarre and historically inaccurate address last week, Russian President Vladimir Putin claimed he was ‘ridding Ukraine’ of ‘neo-Nazis’ by invading.

Like all countries, Ukraine is not free of far-right groups. However, they enjoy little support from the public.

In the last general election in 2019, which saw President Volodymyr Zelensky rise to power with over 70 percent of the vote, the Ukrainian far-right received a humiliating 2 percent.

As a result, far-right groups failed to hit the 5 per cent minimum needed to gain entry into parliament.

What’s more, despite Putin’s shocking comments, Zelensky himself is Jewish whose family tree features members who escaped from the clutches of Nazi Germany and the horror of the Holocaust.

Nevertheless, there have been concerns raised about neo-Nazis and the rise of the far-right in Ukraine, with Azov, a nationalist battalion, now a unit within the nation’s military.

The issue was raised again when a great-grandmother pictured wielding an AK-47 in preparation for an invasion was revealed to have been taught how to use the weapon by the group. 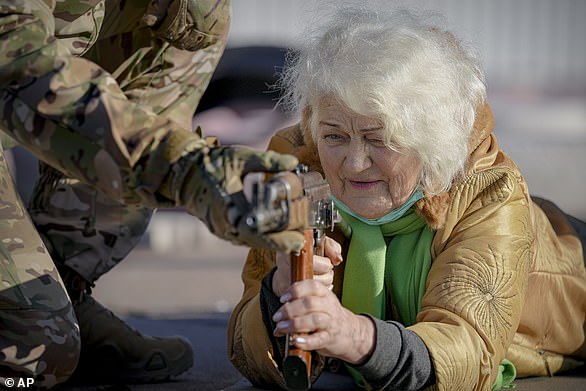 The Azov battalion has been accused of neo-Nazism and attacking LBTQ and Roma communities.

Putin seems to now be peddling a conspiracy that has spiked since last November, perhaps using the Azov Battalion as a scapegoat to gain domestic support for his war.

Keir Giles, an expert on the country, who wrote a Nato report on its information warfare, told the BBC Russia is ‘swift to label its adversaries and victims in Europe as Nazis’.

He added to the website: ‘We have seen this not only in Ukraine, but also in Russia’s vilification of the Baltic states.’