Flood victims are furious after Aussie troops stopped by the side of the road to take promotional photos instead of contributing properly to clean up efforts.

The northern NSW town of Lismore was left in tatters after floods caused by two weeks of heavy rain ripped through the region, destroying more than 2000 homes and leaving four people dead.

Newly-homeless locals took to social media last week to slam federal and state governments, claiming they were abandoned in their darkest hour – forced to flee their homes amid rising flood waters and fend for themselves.

On Friday, one local wrote an Instagram story pleading for help on behalf of everyone in the Northern Rivers region: ‘There’s no police here, no help, it’s just volunteers … we need the army, we need police and we need services.’

Later that day, Prime Minister Scott Morrison sent about 280 soldiers from the Australian Defence Force to the region to help the community clear debris.

But when they finally arrived, residents were shocked and angry to see them setting up lights and cameras in the mud alongside the remnants of their family homes – rather than spending all their time helping to clear the damage. 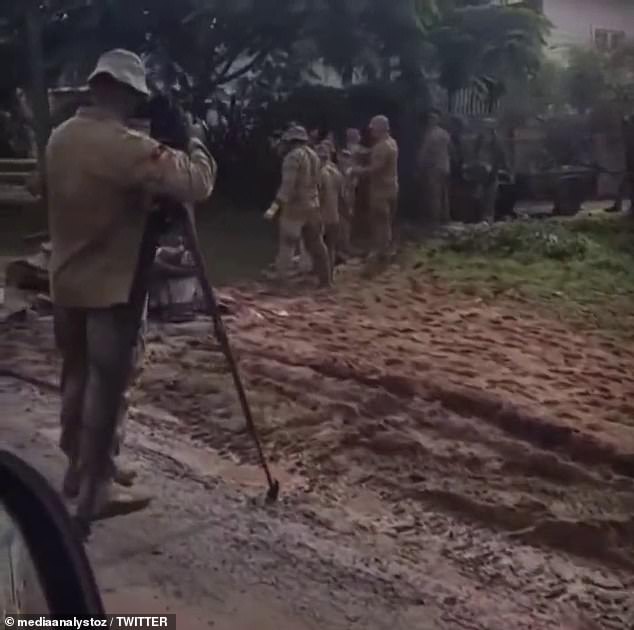 Soldiers in Lismore clear flood debris while being filmed by colleagues. Lismore locals claim the military used the tragedy as a photo opportunity 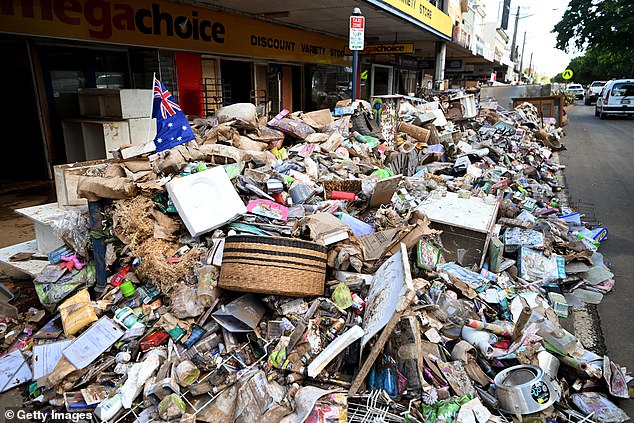 The massive clean-up effort could be further delayed forecasts predict heavy rain for the NSW region. Pictured: Flood damage on the streets of Lismore

In one video shared on Twitter, up to 10 army personnel could be seen clearing a trailer from the front yard of a flood-impacted home – as their colleagues used professional cameras to capture the moment.

‘The army’s finally turned up in northern NSW but they’re filming themselves emptying an already packed trailer of rubbish while thousands need help, food and medicine,’ the caption read.

‘Photo ops, all the way down, under Morrison’s watch.’

Footage shared on Instagram showed troops setting up studio-style lights and camera gear by the side of a road in the town centre.

The woman filming the scene stood was standing just metres away, amid emergency stalls and shelters to feed and house locals who lost all their belongings.

‘Why don’t you point the camera this way, boys?’ she quietly suggested.

The same video was shared by another user with the caption: ‘This is infuriating.’ 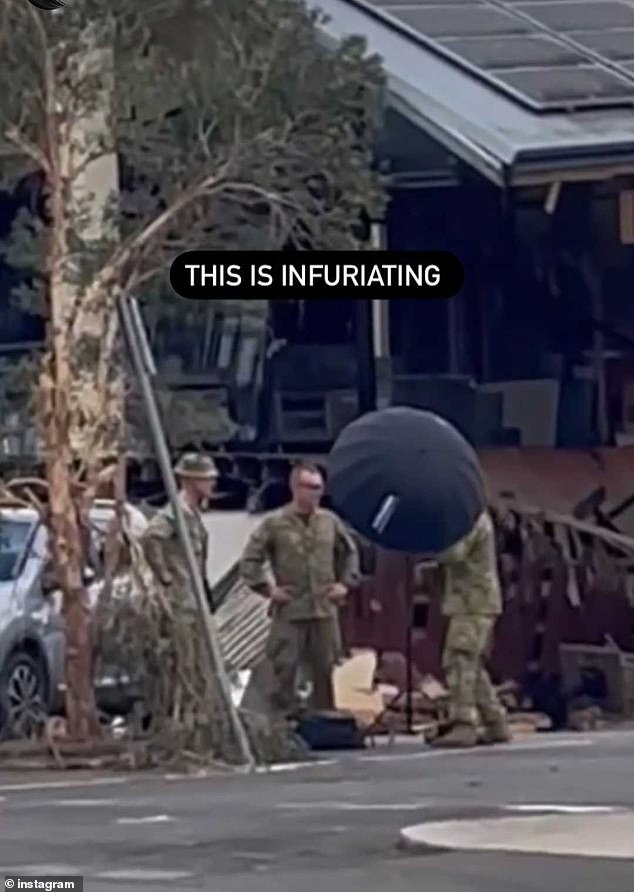 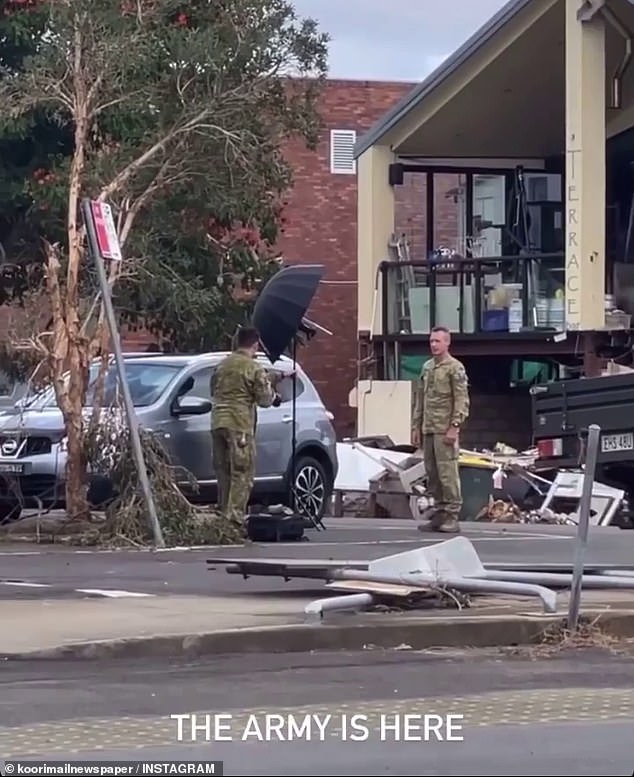 One person filmed the military’s photo opportunity and captioned the video: ‘The army is here’ (pictured)

On Monday – three days after ADF soldiers were deployed – one local was handing food out to destitute community members, and said people kept asking what government organisation they were from.

‘We are no one,’ they wrote in an Instagram story.

‘No one – not a single person is in charge here. We as a community have been left on our own, all running blind with big hearts doing our best to push through this muddy water together.’

Despite complaints that there were not enough defence personnel, Mr Morrison said several thousand were on standby to assist the recovery effort.

‘There are 2000 who are available to be deployed, and those ADF are continuing to roll in where they’ve been tasked,’ Mr Morrison said.

‘There are difficulties getting into a lot of these places currently … that’s why they’re using the helicopters and other supports.’ 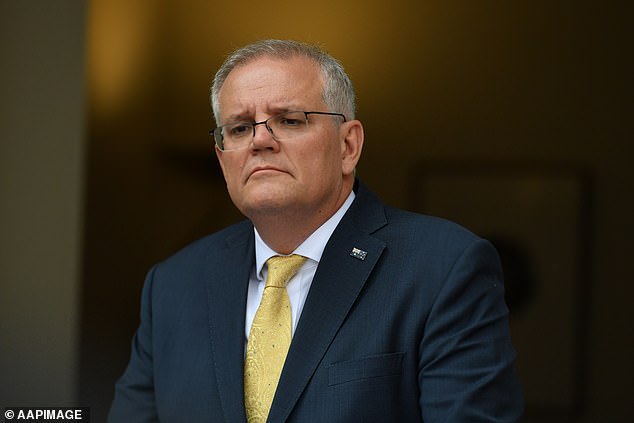 Prime Minister Scott Morrison deployed army personnel to the flood-affected regions of northern NSW, but locals say they used it as a photo opportunity 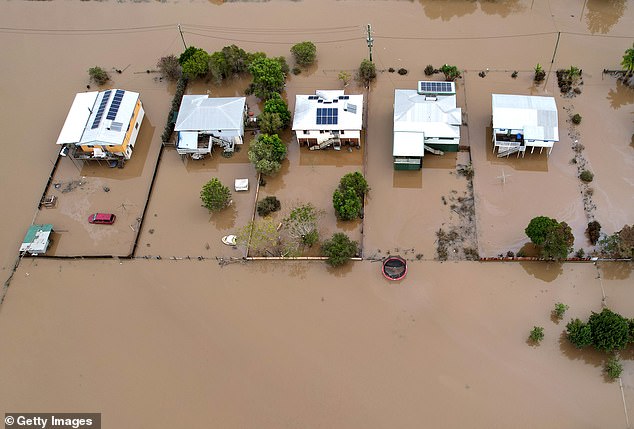 The floods have devastated Lismore and surrounding areas. Pictured: Houses  inundated by floodwater on Monday 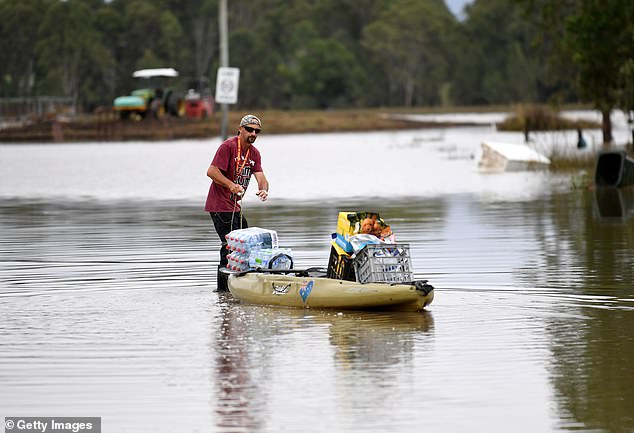 Pictured: A man uses a kayak to deliver supplies to a flood-affected property on Monday, March 7

Another storm rolled into northern NSW on Sunday evening, tearing up roofing and snapping trees.

‘(We’re) very sorry, but we’re doing everything that we can,’ he told 9 News.

‘We’re getting supplies in, we’re getting food in … some of those areas will look back at this and say it could have been done better but we are where we are right now and we’re doing absolutely everything we can.

He acknowledged the ‘anger and frustration’, but claimed the bad weather paused rescue missions.

‘Earlier on in the week, well, last week, we had issues getting aircraft into the sky, just because of the dangerous conditions that were there.

‘There are logistical difficulties with all of this but it is all hands on deck to get the clean-up done, to get supplies in and that’s happening right now.’ 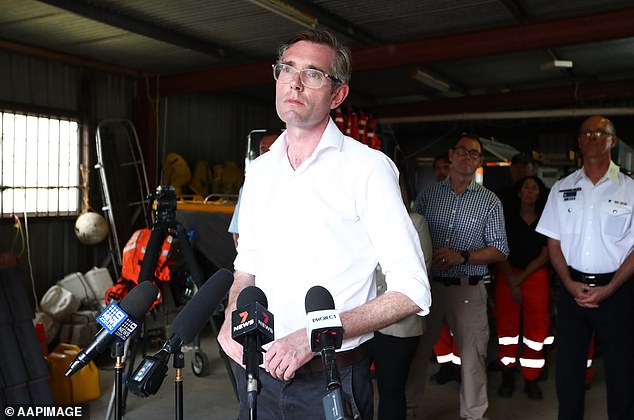 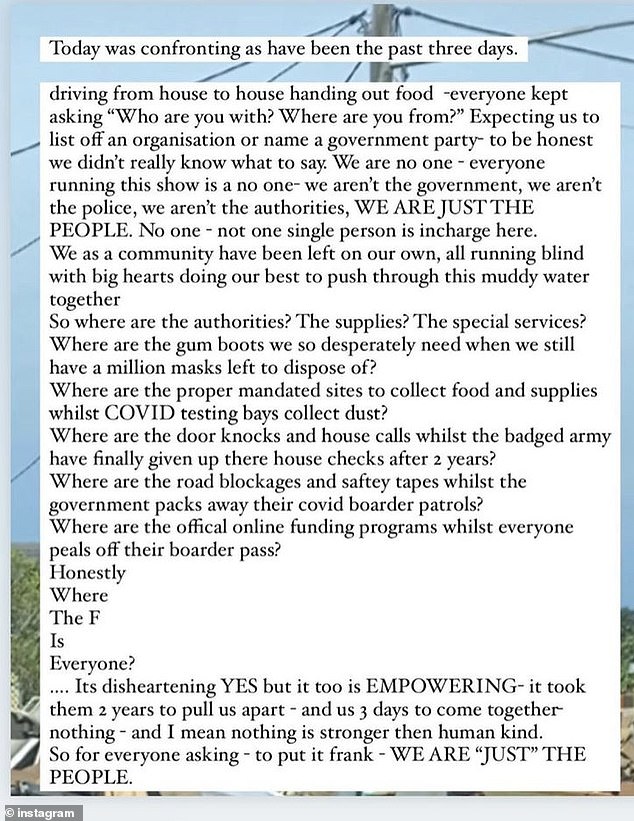 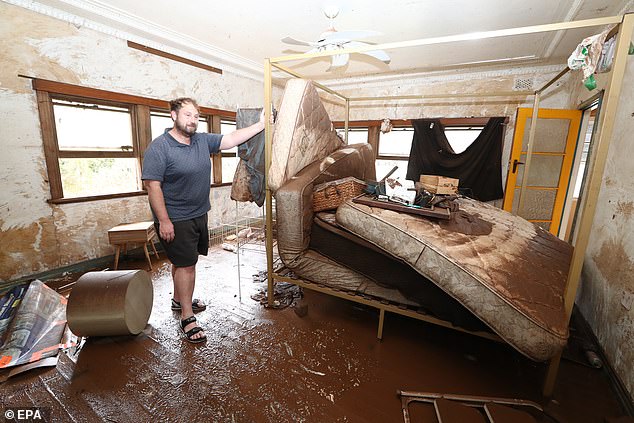 The Northern Rivers region – including flood-stricken Lismore – is forecast to see heavy to intense rainfall and possibly damaging winds and hail over the next few days, with a further 25mm of rain predicted for Monday.

NSW SES deputy commissioner Daniel Austin said the situation could worsen as some levees are about to reach breaking point.

‘We are watching, I guess with some kind of bated breath, of what this next east coast low brings an exactly where that forms off the coast,’ he said.

‘The catchments are reacting and I would expect throughout today that you will see another batch of warnings and evacuation orders potentially for a number of catchments.’

There is a risk of flash flooding at Lismore, Grafton, Coffs Harbour, Armidale, Tenterfield and Dorrigo in northern NSW, along with severe thunderstorm warnings for those areas, along with Glen Innes, Guyra, and Emmaville. 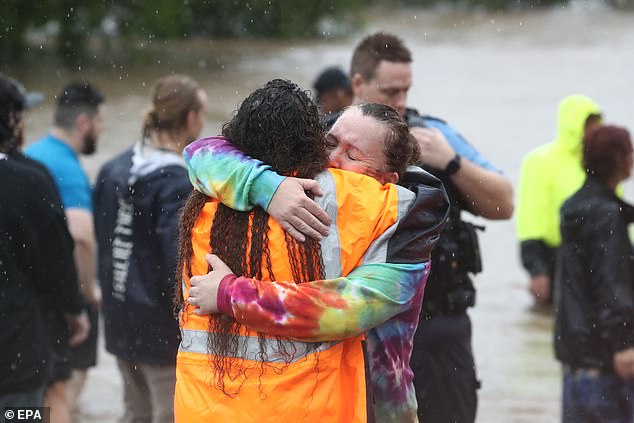 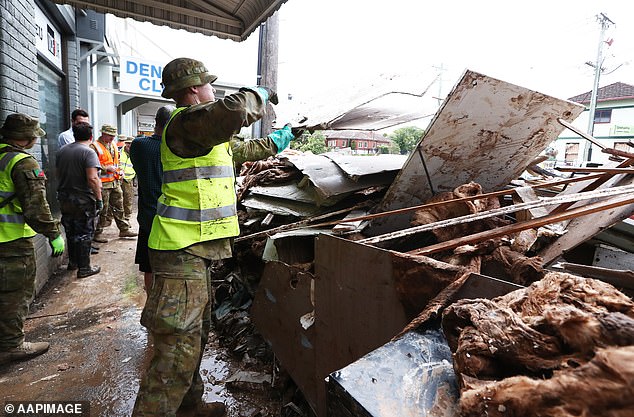 The Bureau of Meteorology said heavy rainfall and thunderstorms had the potential to cause rivers to rise again in areas already hit by flooding.

These included regions along the Hunter, Paterson, Williams, Gloucester, and Manning rivers.

‘The focus of the heaviest rainfall, and rivers at greatest risk, are those extending from greater Sydney to the Hunter and Manning Rivers, where moderate to major flooding is possible,’ the BoM’s flood watch said on Sunday.

A Bureau spokesperson said flood levels could reach those of last week’s floods.