Australian repatriation flights from India to resume after the Covid-ravaged country records another 400,000 cases in just one day

Scott Morrison is set to announce the restart of Australian repatriation flights from India after a proposal was approved by the national security committee.

In a meeting on Thursday, the committee signed off on the plan to start repatriating Australians stranded in India from next week.

Up to 200 passengers could be on the first flight, which will likely depart almost immediately after the temporary travel ban is lifted. 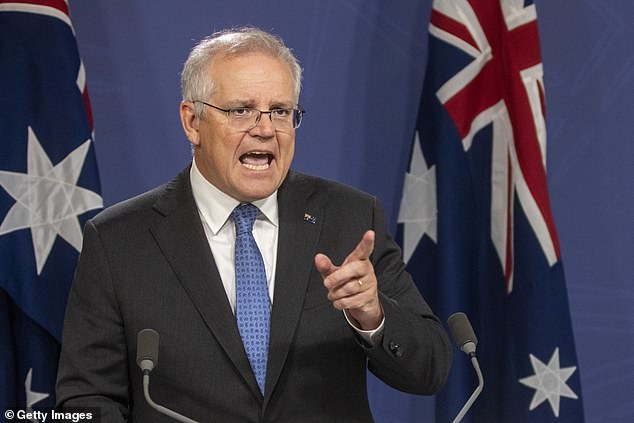 Scott Morrison (pictured) is set to announce the restart of Australian repatriation flights from India as 9,000 Australians are stranded in India after travel ban 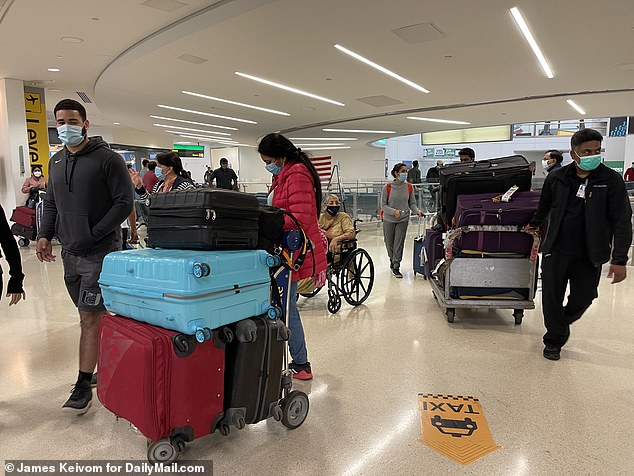 Up to 200 passengers could be on the first flight, which will likely depart after the temporary travel ban is lifted. Pictured: Passengers from an Air India flight arriving at New Jersey in the United States.

The travel ban is in place until May 15, with about 9000 Australians stuck in India including 900 listed as vulnerable.

Immigration Minister Alex Hawke said some of those stranded were ‘in great danger’ and would be prioritised when flights were approved.

The repatriation flights will initially only go to the Howard Springs facility near Darwin.

Thursday’s national security committee talks examined how effectively the pause on flights out of India has slowed the rate of positive cases in quarantine.

‘We will further review that evidence and that advice and when we’re in a position to confirm the restart of repatriation flights based on that advice I will be quick to relay that information,’ the prime minister told reporters. 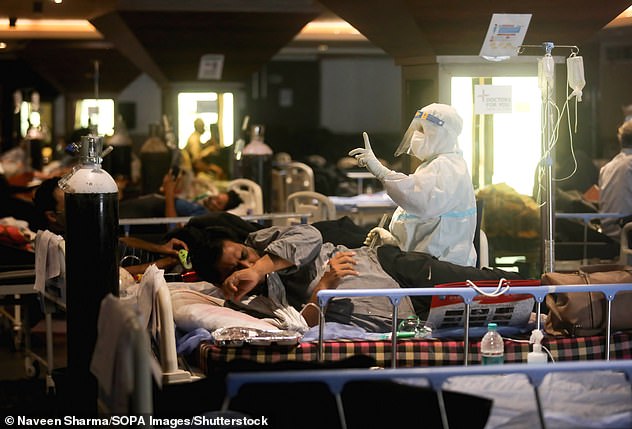 More than 350,000 Covid cases were recorded in India on Wednesday alone. Pictured: a banquet hall temporarily converted into a coronavirus ward in New Delhi 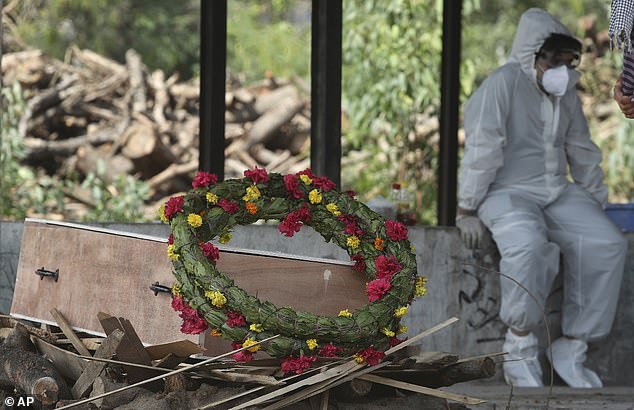 Immigration Minister Alex Hawke said some of those stranded were ‘in great danger’ and would be prioritised when flights were approved. Pictured: Wreath lies on the coffin in Jammu 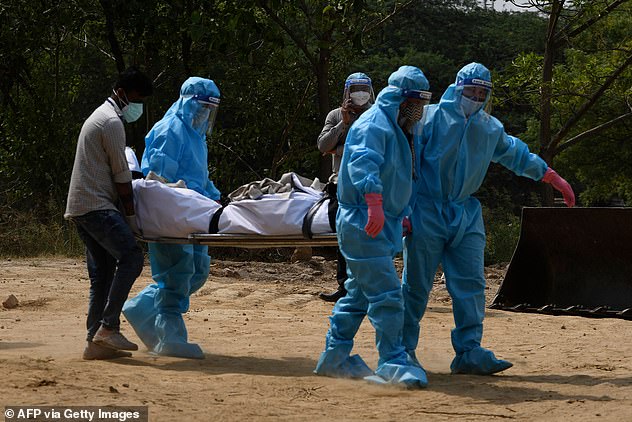 India’s Covid-19 crisis spiked out of control this week with daily deaths exceeding 3,000. In this photo relatives wearing PPE carry the body of a loved one

It comes as Mr Morrison prepares to discuss quarantine arrangements and the vaccine rollout with state and territory leaders in a videoconference national cabinet meeting on Friday.

The impact of the travel ban will also be probed on Friday by a Senate committee which will hear from Australia’s high commissioner to India, Barry O’Farrell.

The committee will also talk to Chief Medical Officer Paul Kelly, who penned the advice behind the ban.

Concerns have been raised that the ban is backed by biosecurity regulations which come with potential fines and even jail terms for breaches. 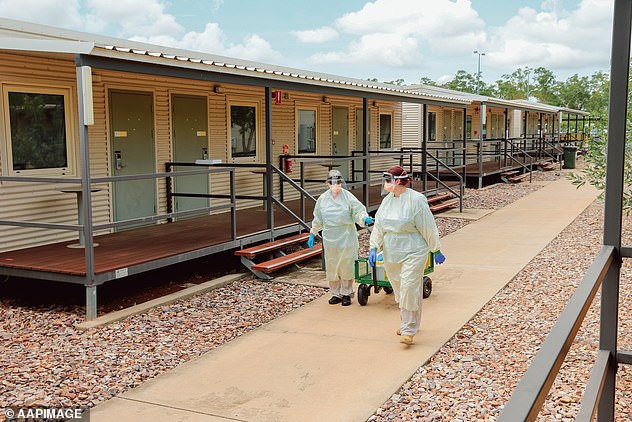 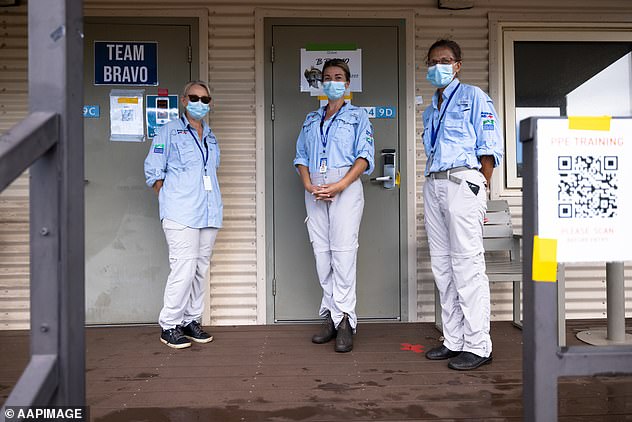 However, the government insists they are only there for the most serious threats.

The future of direct flights out of India to Sydney is being worked through with the NSW government.

Australians trapped overseas may wait many months, with some states reluctant to boost their intake.

Western Australia announced on Thursday the cap on returned travellers would be limited to 530, having been 1025 prior to the latest lockdown.

‘That’s a significant reduction but we’re going to be very precautionary with our hotels,’ Premier Mark McGowan said.

Tourist travel is also facing problems with Sydney reimposing a raft of COVID-19 restrictions as health authorities hunt for the ‘missing link’ between a coronavirus-positive traveller in hotel quarantine and an infected Sydney man.

The move led to New Zealand pausing quarantine-free travel with NSW for 48 hours.

Meanwhile, the vaccine rollout is expected to climb over 2.5 million jabs on Friday, averaging 71,000 daily doses in the past week. 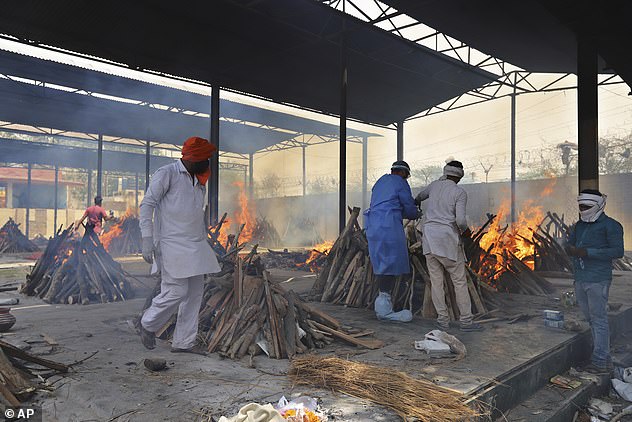 Australians are currently banned from entering the country from Covid-ravaged India. Pictured: funeral pyres of coronavirus victims burning in New Delhi as relatives perform last rites at a crematorium