Chicago Mayor Lori Lightfoot has been accused in a lawsuit of hurling obscenities at a city lawyer who tried to defy her wishes by allowing Italian-Americans to display a removed statue of Christopher Columbus at a parade.

Former Chicago Park District deputy general counsel George Smyrniotis filed the lawsuit on Tuesday against the city and Lightfoot, alleging she defamed him with her remarks in a meeting last year.

‘You make some kind of secret agreement with Italians,’ said Lightfoot, according to the complaint, which was first reported by the Chicago Tribune. ‘My d**k is bigger than yours and the Italians, I have the biggest d**k in Chicago.’

At issue was one of the two Columbus statues that Lighfoot ordered removed during widespread unrest in the summer of 2020, which city Italian-American groups hoped to unveil and display temporarily during their Columbus Day parade last fall.

Smyrniotis and his superiors at the Park District agreed to allow the display — but according to the suit, Lightfoot lashed out in rage when she learned of the plan and threatened to pull the parade’s permit if the statue were displayed. 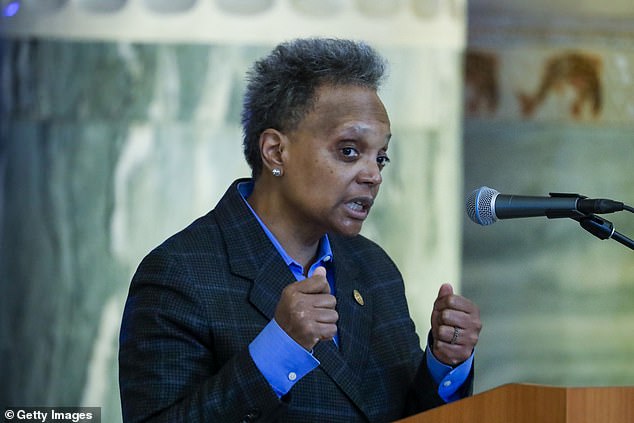 Chicago Mayor Lori Lightfoot has been accused in a lawsuit of hurling obscenities at a city lawyer, and claiming to have the ‘biggest d**k in Chicago’ 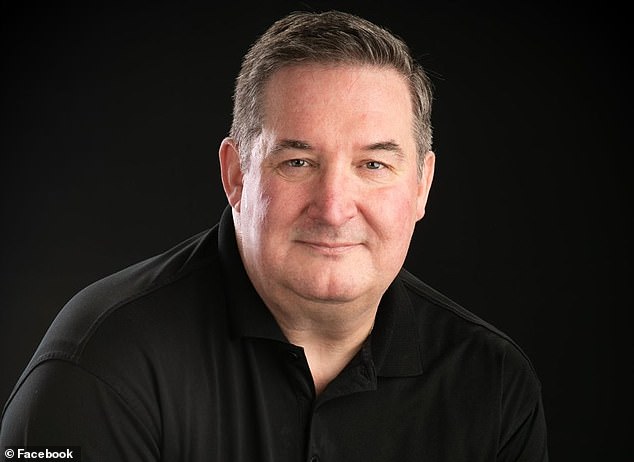 Former Chicago Park District deputy general counsel George Smyrniotis filed the lawsuit on Tuesday against the city and Lightfoot, alleging she defamed him 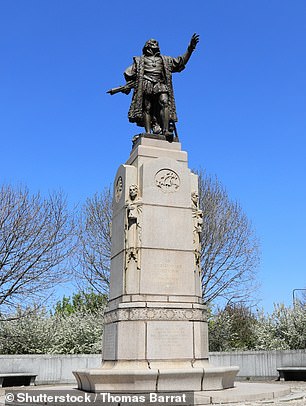 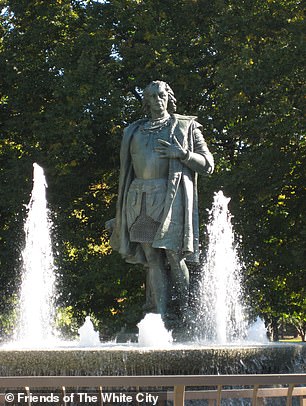 In the summer of 2020, Lightfoot ordered the removal of Columbus statues in Grant Park (left) and Arrigo Park (right). Italian-American groups wanted to display one of them at a parade

‘You are out there stroking your d**k over the Columbus statue, I am trying to keep Chicago police officers from being shot and you are trying to get them shot,’ Lightfoot allegedly said.

According to the suit, Lightfoot told the Park District lawyers that they had to submit all of their moves to the city’s legal department for approval, warning them ‘not to do a f***ing thing with that statute without my approval.’

‘Get that f***ing statue back before noon tomorrow or I am going to have you fired,’ Lightfoot said, according to the complaint.

Smyrniotis and representatives for Lightfoot did not immediately respond to inquiries from DailyMail.com on Wednesday morning.

The lawsuit alleges that Lightfoot ‘proceeded to berate and defame’ him in the meeting by questioning his credentials as an attorney in front of his Park Department superiors.

According to the lawsuit, Lightfoot called Smyrniotis and his supervisor ‘d**ks’ and asked, ‘What the f*** were you thinking?’ 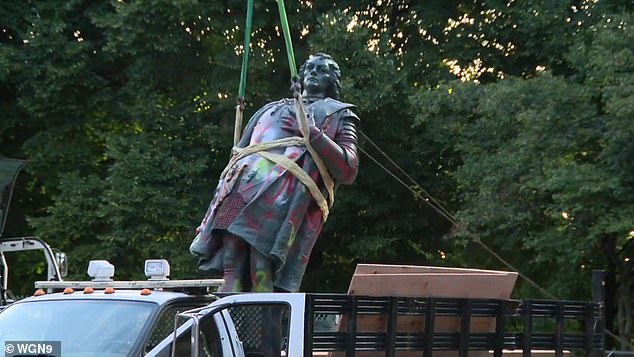 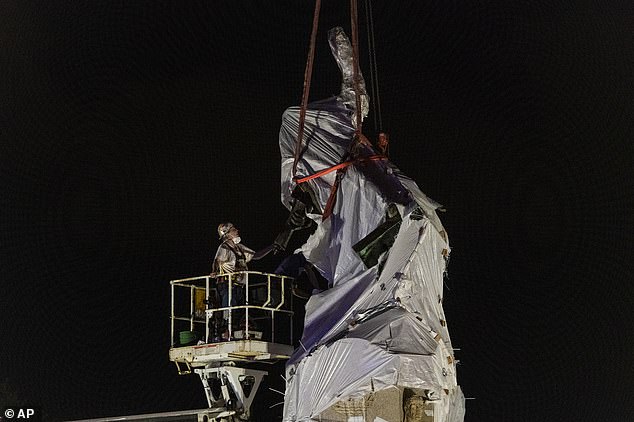 A city Law Department spokeswoman told the Tribune: ‘The city has not yet been served with a complaint and will have no further comment as the matter is now in litigation.’

Smyrniotis resigned from the Park District last month, according to the lawsuit, and now appears to be in private practice in Chicago.

The two Columbus statues — which had stood for decades in Grant Park and Little Italy’s Arrigo Park — have been at the center of a firestorm of controversy since Lightfoot ordered their removal in 2020.

Critics of the statues and others like them call them symbols of oppression, citing Columbus’ brutal mistreatment of indigenous people after he arrived in the Caribbean in 1492.

For many Italian Americans, though, the explorer born in Genoa is a cultural hero and symbol of their heritage.

Lightfoot ordered the removal of the Chicago statues in the context of violent unrest over the police murder of George Floyd in Minneapolis, and as groups of protesters clashed with police and attempted to topple the massive Grant Park statue.

The Democrat mayor gave the order for removal after 49 police officers were injured by a mob hurling rocks and fireworks while attempting to tear the statue down.

‘This step is about an effort to protect public safety and to preserve a safe space for an inclusive and democratic public dialogue about our city’s symbols,’ said Lightfoot at the time. 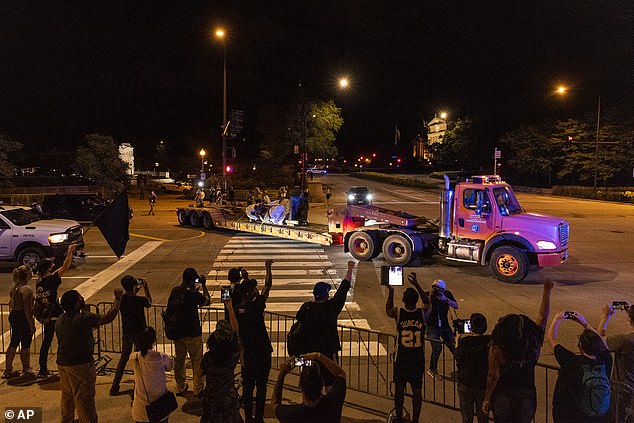 Ever since, the statues have remained out of sight in a city storage facility.

Meanwhile, Chicago’s Joint Civic Committee of Italian Americans has been engaged in a long-running legal battle over the statue removed from Arrigo Park.

In a lawsuit filed last year, the group alleged that the Park District violated a deal signed in 1973 when it took down the statue in Little Italy.

An attorney for the group, Enrico Mirabelli told the Tribune that he believes Smyrniotis’ allegations strengthen their case.

‘Presuming the mayor has been accurately quoted, her comments give proof to the claim that she has wrongfully interfered with my client’s contract with the Chicago Park District in a degree that is unprecedented,’ Mirabelli said.

Ron Onesti told the Tribune that he’s ‘literally outraged that someone in her position would ever use words like that to refer to any group of individuals.’

‘When will it end with the disrespect?’ asked Onesti.

Who was Christopher Columbus and why is he so divisive? 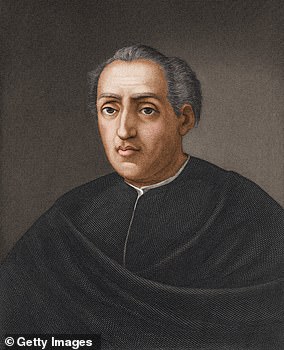 Christopher Columbus, born in Genoa, Italy in 1451, secured his place in history by leading the first expeditions to make European contact with the Carribean and Central and South America.

Sponsored by the Spanish monarchy, Columbus made four expeditions across the Atlantic in a quest to find a western sea passage to the East Indies.

Columbus had convinced Spain’s Queen Isabella to fund his voyage by promising that the riches he’d collect would be used to finance a crusade to ‘reclaim’ Jerusalem for Christians. Instead, he found new foods, animals and indigenous people who, he wrote, were childlike and could be easily enslaved.

Even in his own time, Columbus was accused of cruelty and incompetence in his role as Viceroy and Governor of the Indies, and of brutal mistreatment of the native Taino people on the island of Hispaniola.

Columbus’ supporters say that many of the claims are exaggerated or false, and that the matter is clouded by a contemporaneous smear campaign both against Columbus by his political rivals, and by northern European countries against Catholic Spain.

However, there is good evidence that Columbus brutally subjugated and enslaved the Taino people in the quest for gold.

In 2006, historians discovered a contemporaneous investigative report in Spanish archives, which revealed the results of an inquiry into accusations that Columbus ruled brutally as governor.

The report contained accounts of mutilation, torture and cruelty that were shocking even to Columbus’ contemporaries, and resulted in his permanent removal as governor and temporary imprisonment by King Ferdinand.

‘Columbus’s government was characterized by a form of tyranny,’ Consuelo Varela, a Spanish historian who has seen the document, told journalists. ‘Even those who loved him had to admit the atrocities that had taken place.’

Around 60 years after Columbus’ arrival, the Taino indigenous population of the Caribbean had been reduced from an estimated 250,000 people to a few hundred because of slavery and death from new diseases.

However for many Italian Americans, the Italian-born explorer continues to be an important symbol in their heritage.

Millions of Italian immigrants traveled across the Atlantic and through Ellis Island in New York to start a new life in America in the late 1880s to 1920s.

They faced xenophobia and prejudice, including one of the largest single mass lynchings in American history when 11 were murdered in 1891 in New Orleans.

The Italian explorer thereby became a cultural hero for Italian immigrants to hold on to during this time, and Columbus Day parades began in the late 1800s.