A five year old’s pet dogs have been stolen from the family’s back garden in a quaint village prompting a hunt to reunite the hounds with their owners.

The treasured pets – mother Darlin and her puppy Darcie – were swiped from the home in Chilham, near Canterbury in Kent, in broad daylight and the family are now appealing to the public for information of their whereabouts.

Darlin – a black-and-white cockapoo, cocker spaniel cross – was given to Amy as a puppy after she kept begging her mother for a pet dog.

Now her mother Rosie, 41, is too upset to tell her little girl that the dogs have been stolen.

The dogs, aged two and a half and 14 months respectively, were reported missing from the family’s back garden on the A28 Ashford Road at about 4.30pm last Thursday. 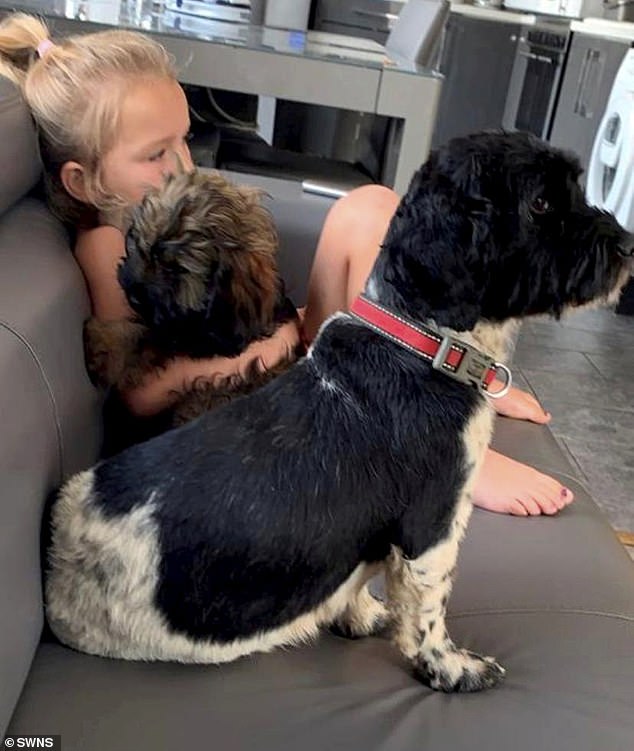 A five year old’s pet dogs have been stolen from the family’s back garden in a quaint village prompting a hunt to reunite the hounds with their owners (Amy, five, is pictured with dogs Darlin and Darcie)

Mother-of-six Rosie said: ‘I went out to shout to them, and they didn’t come. I knew straight away something wasn’t right.’

The family frantically searched around the house and scoured the local playing fields and woodland, but it was all to no avail.

The stay-at-home mother added: ‘My dogs don’t wander off my property. I live on four and a half acres and they have so much land to run, roam and play on.

‘If they did get out they would have been somewhere local, but they were nowhere to be seen. They one hundred per cent were stolen.’

The family have contacted police who are now investigating.

Rosie said a suspicious woman had turned up at their house shortly before the pair of pups were stolen.

She is believed to have taken a detour to where the dogs were playing outside before leaving but says no one she knows saw her leave. 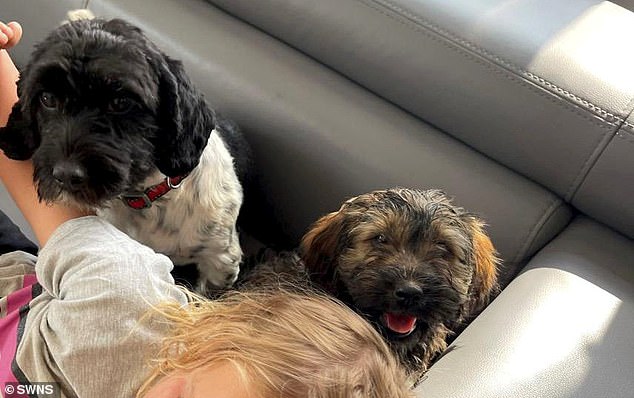 The dogs, aged two and a half and 14 months respectively, were reported missing from the family’s back garden on the A28 Ashford Road at about 4.30pm last Thursday

She added: ‘Since this happened to my dogs so many people have messaged me about a man and woman who have been seen everywhere talking to dogs.

‘The woman was seen yesterday in the next village. She stopped a man in a mobility scooter and asked him about his two dogs.

‘He has dementia and he was being asked questions such as ‘are they your guard dogs, have they been spayed?’ It frightened the life out of him.

‘The poor man only leaves the home to take the dogs for a walk and after this he turned straight back home.’

Rosie is now worried about what Darlin and Darcie are going through.

‘It’s hard not to think those things. I don’t think these people are going to treat the dogs how we did.

‘Our dogs were groomed every eight weeks, they used to come out on picnics, on family walks. The dogs were a big part of our family.

‘They make sure we are all OK and they are fun-loving dogs. They love to be cuddled and petted and we love them.

‘I very much doubt they are getting that now.

‘They don’t like strangers and I know they’ll be scared – the thought of picturing them scared, chucked in somewhere horrible, it just makes my stomach churn.’

The mum has broken the news to her eldest four children but is yet to tell Amy or her youngest son, who is four.

She added: ‘I can’t face telling her yet. I was hoping by now we’d get them back, but obviously we haven’t and I’ll have to tell her at some point.

‘My other four children are not sleeping and they keep crying, saying ‘we don’t know what is happening to them’ and asking if they are safe and being looked after.

Police are investigating the reported theft, which is believed to have taken place between 2.45pm and 2.55pm last Thursday.

Last year the government announced plans that could land dognapers in prison for up to five years following an alarming rise in dog and other pet thefts during the pandemic.