By Matthew Wright For Dailymail.com

A former Yale professor is suing the university after she was allegedly fired for tweeting about a ‘shared psychosis’ that ‘just about all’ of former president Donald Trump supporters had.

Dr Brandy Lee, a former faculty member in the Department of Psychiatry in School of Medicine, filed a complaint against the Yale Monday claiming that she was unlawfully terminated ‘due to her exercise of free speech about the dangers of Donald Trump’s presidency.’

Dr Lee has been a vocal critic of Trump over the years, notably sending a letter to the Senate Judiciary Committee in 2019 claiming that President Trump is showing ‘signs of delusion’ amid the impeachment inquiry.

The former professor claims in her complaint that Yale fired her for a January 2020 tweet where she described how ‘just about all’ Trump’s supporters were suffering from ‘shared psychosis.’

Dr Brandy Lee, a former faculty member in the Department of Psychiatry in School of Medicine, filed a complaint against the Yale Monday

She added that lawyer Alan Dershowitz, a member of Trump’s legal team, had ‘wholly taken on Trump’s symptoms by contagion.’

Dr Lee had been responding to a tweet from University of Minnesota Law Professor and Yale Law School alumnus Richard Painter in relation to Dershowitz describing his sex life as ‘perfect,’ Hill Reporter reports.

Following her tweet, Dershowitz sent a letter to Yale administrators on Jan. 11, complaining that the professor’s post constituted ‘a serious violation of the ethics of the American Psychiatric Association’ and calling for her to be disciplined. The Yale Daily News said that Dershowitz added in his letter that Lee ‘publicly diagnosed [Dershowitz] as psychotic…without ever examining or even meeting’ him.

In a statement to the News, Dr Lee expressed that she was not thrilled to have to seek legal action against her alma mater. 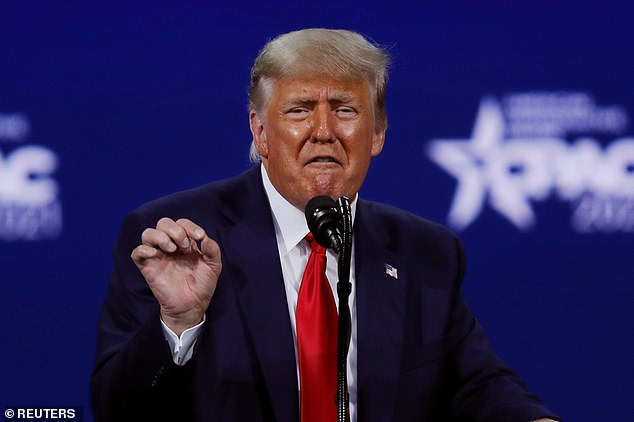 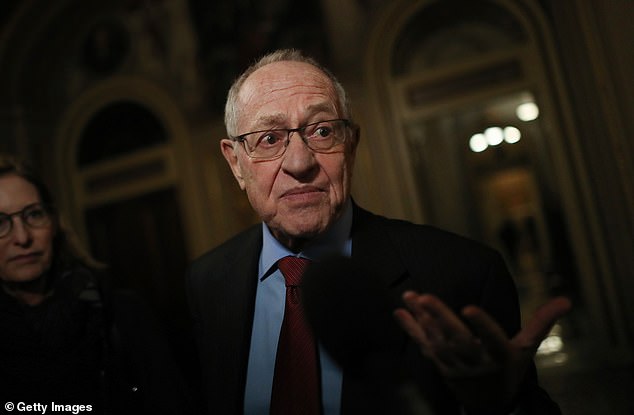 She added that lawyer Alan Dershowitz, a member of Trump’s legal team, had ‘wholly taken on Trump’s symptoms by contagion’

‘I have done this with a heavy heart, only because Yale refused all my requests for a discussion, much as the American Psychiatric Association has done,’ Lee said. ‘I love Yale, my alma mater, as I love my country, but we are falling into a dangerous culture of self-censorship and compliance with authority at all cost.’

Court documents share that following Dershowitz’s letter, chair of the Psychiatry Department John Krystal told Lee via email that the department ‘would be compelled to ‘terminate [her] teaching role’ if she continued to make similar public statements. She continued to tweet about the mental fitness of Trump even after Krystal’s warning. Lee then met with Krystal and additional unnamed faculty members and was told that she ‘breached psychiatric ethics.’

Dr Lee continued tweeting critically of Trump and his mental fitness, and was subjected to follow up meetings with Krystal and other faculty members, the court documents state.

Yale refused to have any additional discussions and failed to investigate the matter any further, the complaint reads. Dr. Lee would learn she was terminated on May 17, 2020. Her numerous appeal attempts in the following months resulted in failure. 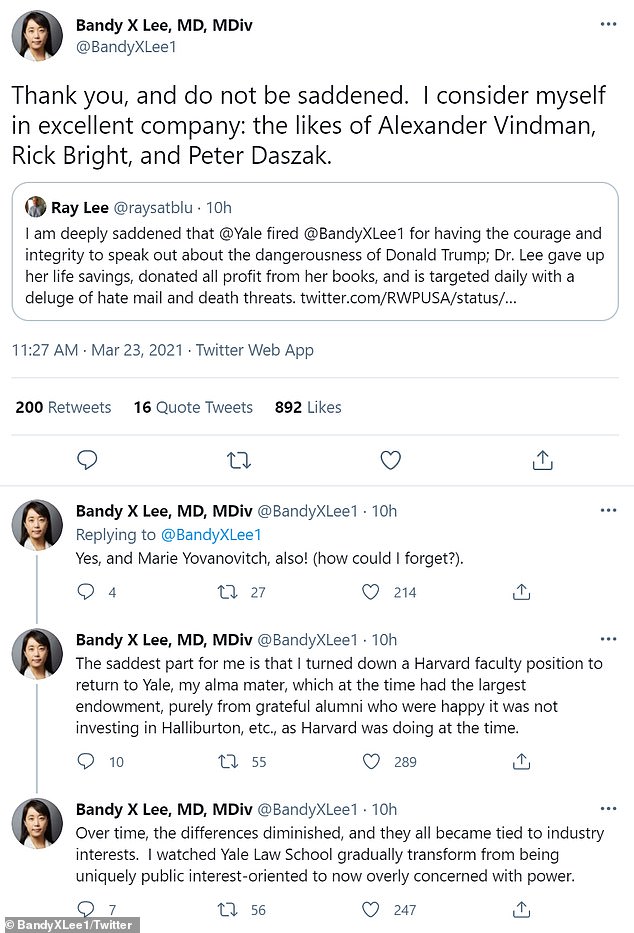 Dr Lee claims she turned down a role with Harvard to take the job at Yale, her alma mater

A letter Krystal sent to Lee stated that she repeatedly violated the American Psychiatric Association’s Goldwater Rule – which states that it is unethical for psychiatrists to comment on a public figure’s mental faculties in an official capacity unless granted permission or after a medical examination.

The former Yale faculty member feels that the Goldwater Rule is a ‘gag order,’ according to the court documents. Lee believes that the rule goes against her role as a psychiatrist ‘in light of her belief that Donald Trump posed a dangerous threat to his country and the world,’ the complaint reads.

Dr Lee has not been a member of the American Psychiatric Association since 2007.

In her complaint, Lee also claims that she did not diagnose Dershowitz, ‘but [was] rather commenting on a widespread phenomenon of “shared psychosis.”‘

She is looking to be reinstated and is seeking compensation for damages, which include ‘economic losses’ and ’emotional distress.’