Two US Border Agents have been filmed reportedly standing by and watching two migrants drown in the Rio Grande river without making an effort to save them.

Witness Jesús Vargas told Telemundo that he had decided to tail border agency vehicle that was in pursuit on a minivan last Tuesday in the Texas border town of Laredo.

The vehicle came to a stop on a road next to the river before as many as ten undocumented migrants made a dash for the water to return to Mexico and avoid being detained by the U.S. Border Patrol agents.

Vargas’ video footage shows three individuals, believed to be from Honduras, struggling to stay afloat in the rushing waters.

A migrant in the back could be heard saying ‘help’ in Spanish before Vargas turned to the border enforcement officers and asked them why they weren’t intervening.

‘These guys are drowning. It’s bulls***. Hey, you don’t have life jackets? Nothing? They’re drowning, these guys,’ Vargas said.

‘The girl didn’t come out no more. Call the boat man. They’re drowning.’

The video shows one Border Agent giving a passing glance at the migrants before continuing onwards. A small crowd of agents were also seen watching from the Texas bank near their car.

None of them make any move to save the drowning migrants who drowned as they watched.

A spokesperson for Customs and Border Protection told DailyMail.com that the incident is still under investigation and declined to provide additional information. 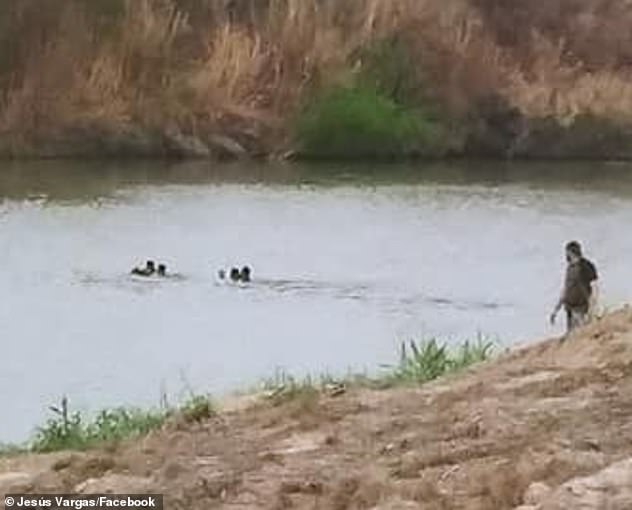 A U.S. Border Patrol agents watches from Rio Grande shoreline in the Laredo, Texas, as a group of migrants struggled while attempting to swim back to Mexico and prevent from being arrested 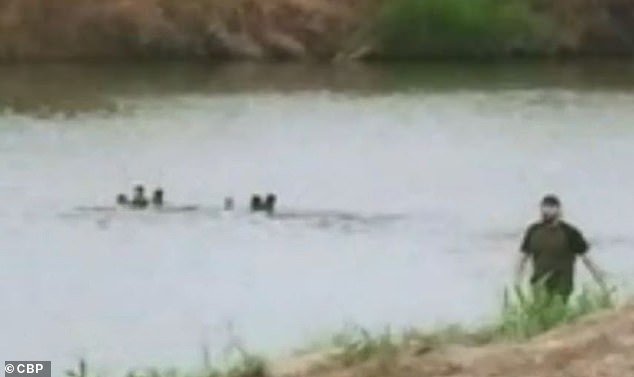 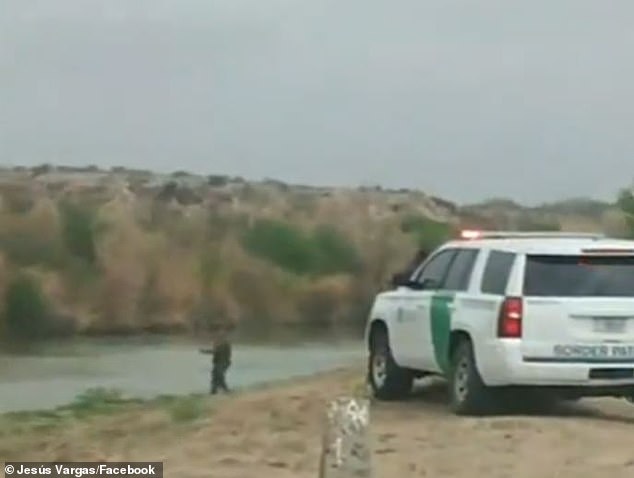 A Border Patrol agents stands near his vehicle near the Rio Grande riverbank in Laredo, Texas, before two migrants drowned last Tuesday

Vargas subsequently told the agents to use a reel to help the migrants out of the river and then offered to come to their rescue.

He said that the Border Patrol officers told him that they were unable to provide any assistance because ‘they were almost crossing to the other side’ and that they did were not authorized to step into the river.

Footage uploaded by Vargas to his Facebook account shows the back of one of the drowned migrants and a group of Mexican agents recovering the bodies of the two victims.

Vargas recalled using a fishing rod to help the surviving migrant, who he said was 13-year-old. 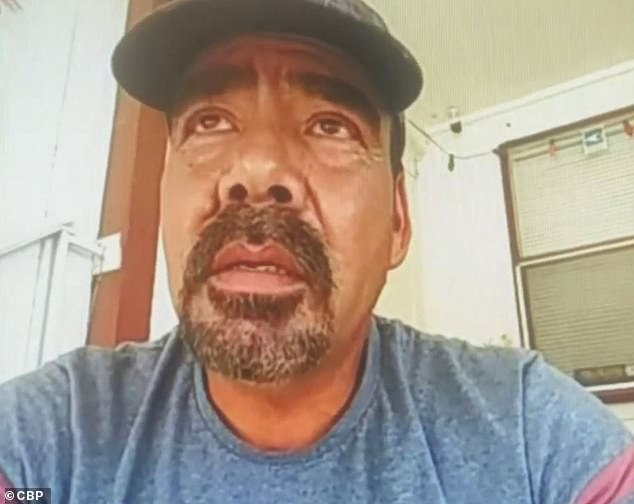 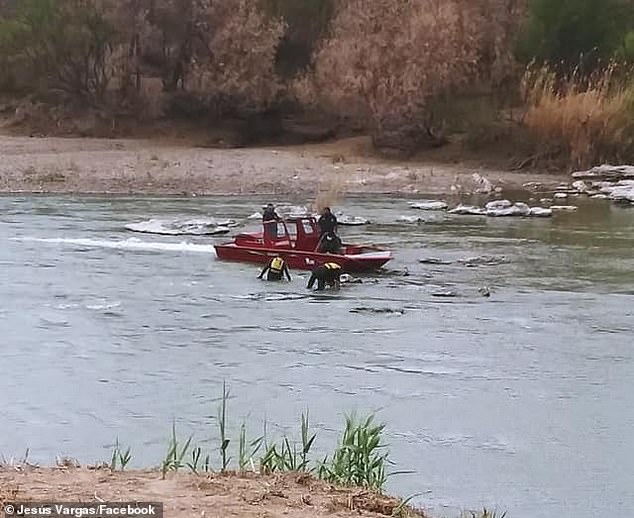 Mexican authorities recover the body of migrants who drowned in the Rio Grande last Tuesday. A group of individuals had escaped from a vehicle that was being followed by the U.S. Border Patrol in Laredo, Texas, and attempted to swim back to Mexico. A witness identified as Jesús Vargas told Telemundo he was following the Border Patrol vehicle and saw how the agents were just watching from the Texas shoreline while the migrants struggled to stay afloat 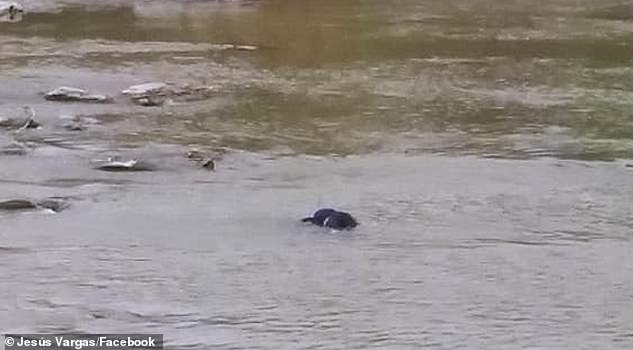 ‘I tried to catch his attention. He looked towards this side and I extended the fishing line,’ Vargas said. ‘He took his hand, grabbed the line and that’s the way how I brought him to the river edge.’

U.S. Border Patrol Laredo Sector acknowledged that its officers were attempting to prevent a human smuggling attempt when the migrants tried to flee for Mexico by swimming across the Rio Grande.

‘This afternoon (Tuesday), U.S. Border Patrol agents from the Laredo Sector foiled a human smuggling attempt at the end of Calton Road and the riverbanks,’ the agency said in a statement. ‘The incident remains under investigation.’

The names, ages and nationalities of those who were apprehended as well as the two migrants who drowned were not released. 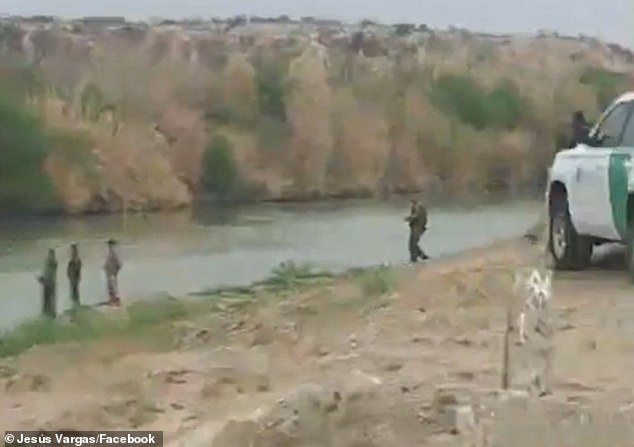 Border Patrol agents were filmed standing along the Rio Grande riverbank in Laredo, Texas, while a group of migrants attempted to swim to Mexico before two of them drowned 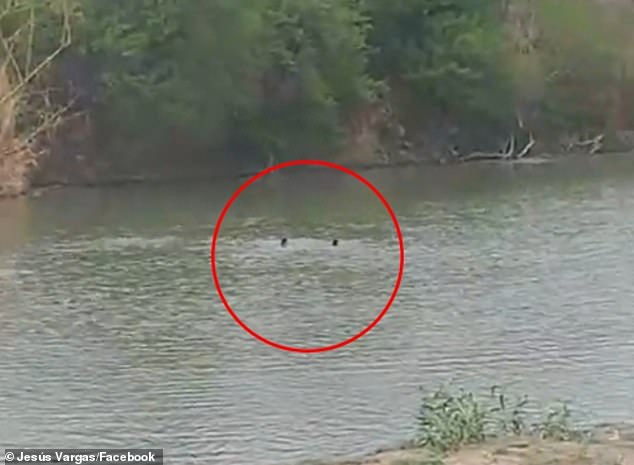 The Mexican government on Monday said it would be meeting with U.S. officials Tuesday to address the continuous rise of Central American migrants transiting through their country to reach the dangerous southwestern border area.

Migrants are either looking to seek asylum or enter illegally with the assistance of criminal organizations with fetch thousands of dollars per individual.

The United States has dealt with an uptick of migrants at the border since President Joe Biden took office.

U.S. Customs and Border Protection in February registered 100,441 apprehensions, expulsions, and inadmissible encounters, the most since 104,311 such incidents were reported in June 2019.

As of Saturday, there were more than 15,000 unaccompanied children under the custody of the U.S.