Millions of residents have been told to prepare for heavy rainfall, powerful winds and flash floods as three cyclones form off the coast of Western Australia.

The first is a tropical low that has been forming off the north-west coast and will develop into a category one cyclone by Friday.

The cyclone, named Cyclone Odette, will bring heavy rain and gusty winds to Exmouth, on the north-west coast, as soon as Saturday night.

The second is Tropical Cyclone Seroja, which is expected to develop from a category one into a category three system, before moving south-west and making landfall on Sunday.

The Bureau of Meteorology said anywhere along a 1,100km stretch from Perth north to Coral Bay could be in the cyclone’s firing line – although it will most likely make land near Carnarvon in the Gascoyne region.

A third tropical low is also developing near the Cocos Islands and, combined with the other two systems, will bring a month’s worth of rain in just one day to parts of the state. 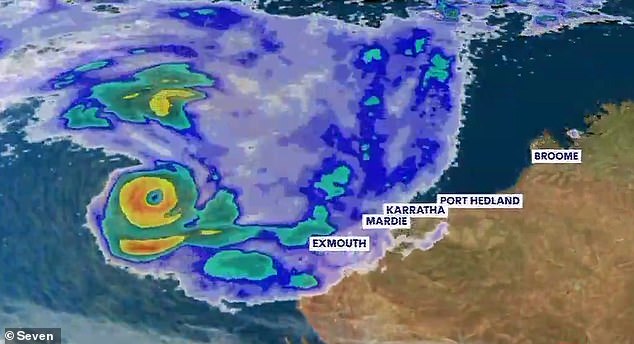 Holidaymakers in the state’s north have been told to evacuate with 150km/h winds forecast to batter the coastline.

Bureau of Meteorologist senior meteorologist James Ashley says he has never seen such an event.

‘I’ve been working here in Perth for over 20 years and I’ve never seen us have three systems so close to being cyclones or being cyclones at the one time,’ he said.

‘Generally, cyclones tend to need a bit of space between them so they don’t mess each other’s inflow and winds and moisture feeds and things like that.’

Cyclone Odette and Cyclone Seroja are expected to rotate around each other to create the extremely rare Fujiwhara Effect.

Tropical cyclone forecaster Craig Earl-Spurr said the rare meteorological phenomenon would make it look like the cyclones were ‘dancing’ and was not common in Australia.

‘Because both are trying to throw each other around their own wind fields, as each one moves the wind field moves with it,’ he told ABC News.

‘Depending on how that then pushes the other [system] around, little changes can become big changes very quickly.’

BoM computer modelling has yet to pinpoint the path of Cyclone Seroja. 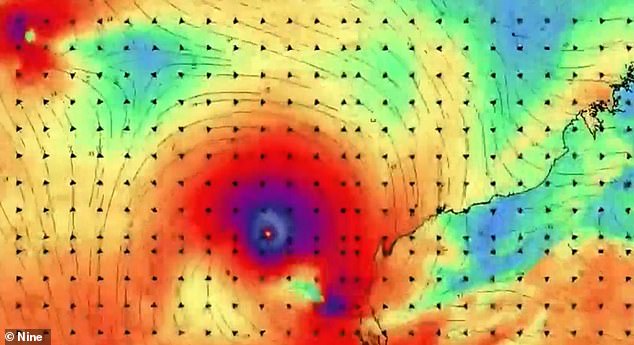 The Bureau of Meteorology said anywhere along a 1,100km stretch from Perth north to Coral Bay could be in the cyclone’s firing line – although it will most likely make land near Carnarvon in the Gascoyne region 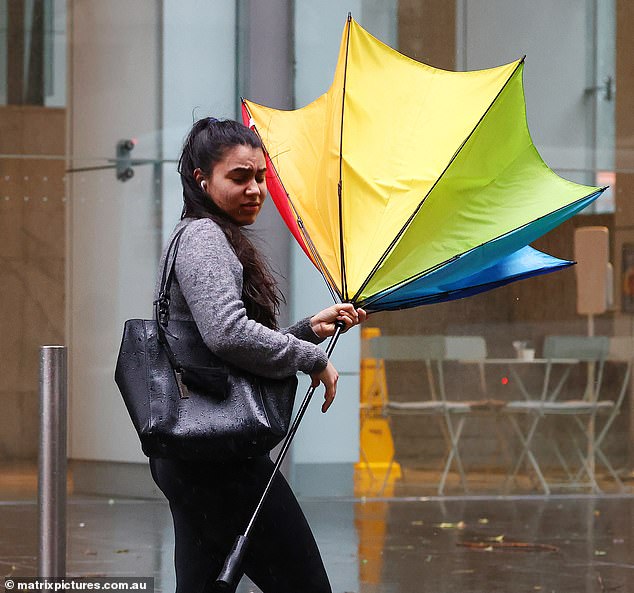 South Australia, Victoria, southern parts of NSW and the ACT will see temperatures dramatically drop over the weekend. Pictured: A woman braves the rain in Sydney in February

But the bureau warned there could be an increase in rain and winds in the Pilbara and Gascoyne Coat region.

Mr Earl-Spurr said the systems are difficult to track because they will be locked in a ‘tug of war’ once the Fujiwhara Effect starts to take place.

‘They can take a full 90-degree turn when they first start to interact with each other,’ he said.

Parts of Australia are forecast to shiver through icy temperatures and wet weather in the coming days as a blast of Antarctic air sweeps across the nation’s south.

Some areas are tipped to see their coldest days of the year so far.

Cold fronts are forecast to hit southern and central parts of the country beginning on Friday, with some areas expected to see hail or snow by the end of the weekend. 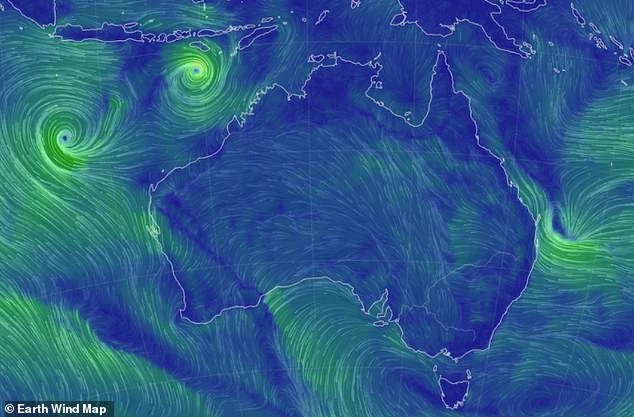 Cyclone Seroja pictured to the east of the other tropical low north-west of the Australian coastline. Meteorologists have said the systems are difficult to track because they will be locked in a ‘tug of war’ as part of the Fujiwhara Effect 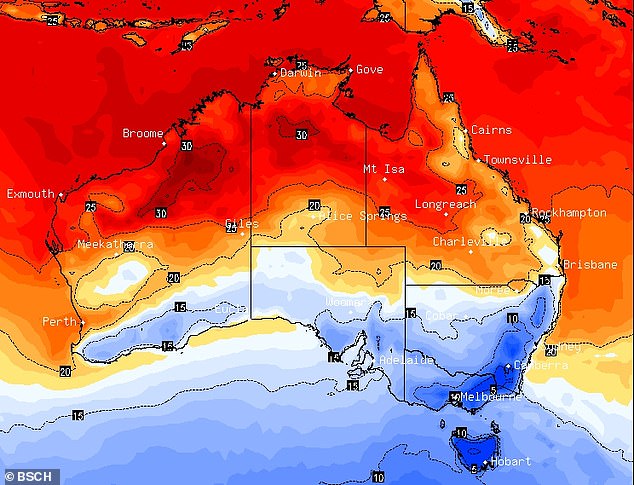 Parts of Australia are set to shiver this week as two cold fronts sweep a ‘polar blast’ of air across the country. This map shows the coldest areas (in blue) on Sunday morning

As a high pressure system that has brought balmy weather across the east shifts into the Tasman, two low pressure systems moving in from the south are bringing cold artic air up from the Great Australian Bight.

‘A spell of unseasonably warm weather will come to an abrupt end over central and southern Australia this weekend,’ said Sky News senior meteorologist Tom Saunders.

‘The warmer temperatures have left southern Victoria about 5C above average.

‘But the cold front hits Hobart on Thursday night, and on Friday morning cold south westerly winds will arrive in Melbourne.’

South Australia, Victoria, southern parts of NSW and the ACT will see temperatures dramatically drop over the weekend, with those regions tipped to potentially see the coldest day of the year so far on Sunday or Monday.

Melbourne is forecast to fall from a top of 29C on Thursday to just 15C on Sunday, with showers developing on Friday and continuing through the weekend. 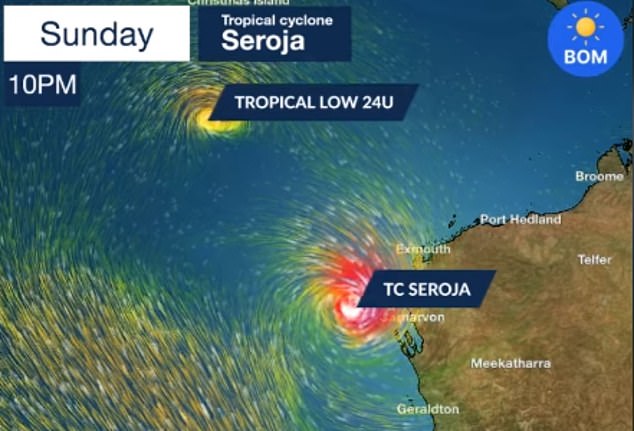 In Adelaide, the mercury will plummet from 31C on Thursday to a high of 19C on Sunday.

Meanwhile, residents along a vast stretch of Western Australia’s coastline have been warned to prepare for two possible tropical cyclones developing offshore, while minor flood warnings are in place for rivers in north-east NSW.

Sydneysiders can expect a hot 30C on Friday, before mid-20C temperatures on Saturday and Sunday.

But the mercury will drop to a chilly minimum of 11C on Monday, before jumping back to 26C on Tuesday.

Canberra is set to shiver through cloudy days over the weekend with lows below 5C and highs in the mid-to-high teens. 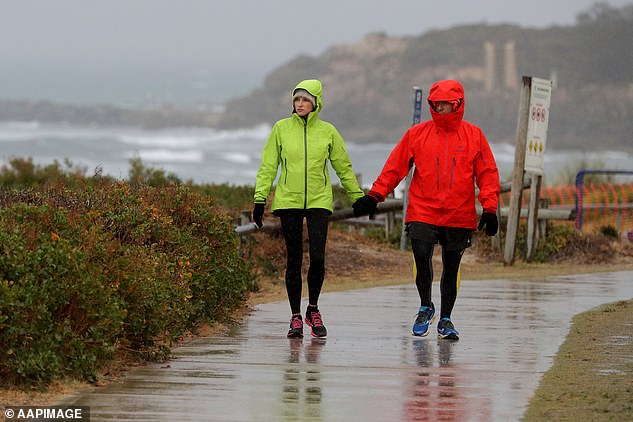 Residents of a vast stretch of Western Australia’s coastline are being warned to prepare for two possible tropical cyclones developing offshore. Pictured: A couple walking near Leighton Beach in Perth during wet weather

Sunshine will reappear on Monday, but temperatures will remain low, with a 0C minimum, bouncing up to 2C on Tuesday.

Showers are in store for Hobart on Saturday and Sunday, with temperature ranges between 7C and 15C.

Possible storms and showers are forecast for Darwin from Friday until Tuesday, with highs topping 33C and lows in the mid 20C.

Brisbane and Perth residents will enjoy warm weather leading into next week, with lows in the high teens and maximum temperatures in the 20Cs.

Perth will swelter through 30C heat on Saturday, before some showers on Sunday.