‘Rowdy’ pensioners in west London face being fined and arrested for gathering to play dominoes and backgammon in a Westminster Council crackdown.

Locals gather regularly in Maida Vale, and claim the meetings offer mental health support and an escape for those who have lost loved ones to Covid-19.

But Westminster Council has secured a special injunction from the courts allowing officers to fine those who are deemed to be causing noise and disruption.

A spokesman told MailOnline the injunction order, which applies to Maida Hill Market, was put in place due to increased anti-social behaviour and noise disruption.

It prohibits engaging in disorderly behaviour, such as shouting, using foul language or verbal abuse; engaging in aggressive, threatening or violent behaviour; playing loud music through speakers and drinking alcohol.

It was put in place on January 29, and is an interim order notice until March 25 when the full decision for a permanent injunction order will be made.

One resident, Prue, recently lost her husband Alan to coronavirus, and says playing games outside with friends brings back fond memories of her late partner.

She said: ‘He’s been ill for the last 10 years. Seriously ill with dialysis, kidney failure. The square is the one thing that got him out of his house.’

After his death from Covid-19 five weeks ago, Prue turned to the locals who meet on the market square in Maida Vale for comfort and support. 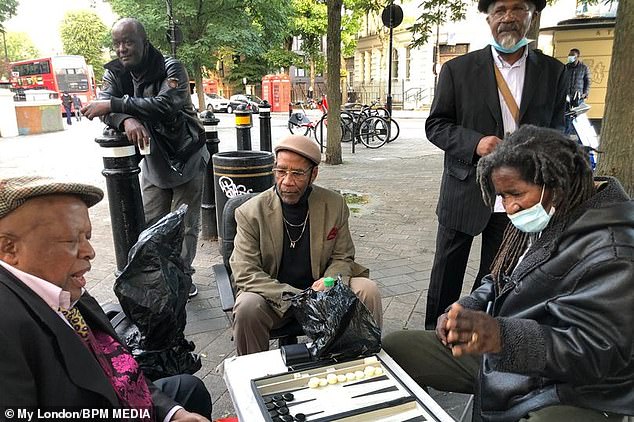 One resident, Prue, recently lost her husband Alan to coronavirus, and says playing games outside with friends in Maida Vale brings back fond memories of him. Pictured: Alan with Ernest Theophile

‘Playing backgammon, playing dominoes, have a cup of coffee and that really kept him going,’ she said.

‘Even me, since I lost him, if I didn’t have somewhere like that in the area. I’m going through bad depression at the moment, and I can go out and see people I know.

‘There’s nowhere else for us to go in this area.’

Locals have now launched a campaign called ‘Provide not Punish’ to get the community support they need including a hall where they can meet.

Another local, John, suffers from mental health issues and says going to the square is all he has.

He said: ‘I attend the square because if I didn’t I would be thinking about killing myself because all I’ve got in my life is the square.

‘With my lungs and everything, I should be inside all the time, but since it’s [the pandemic has] been going, I’ve been going to the square everyday.

‘But mostly I’ve been out to the square and every time I’ve been told to move on, I move on and I come back every time because it’s lonely,  I get so lonely because I got nowhere [to go]. 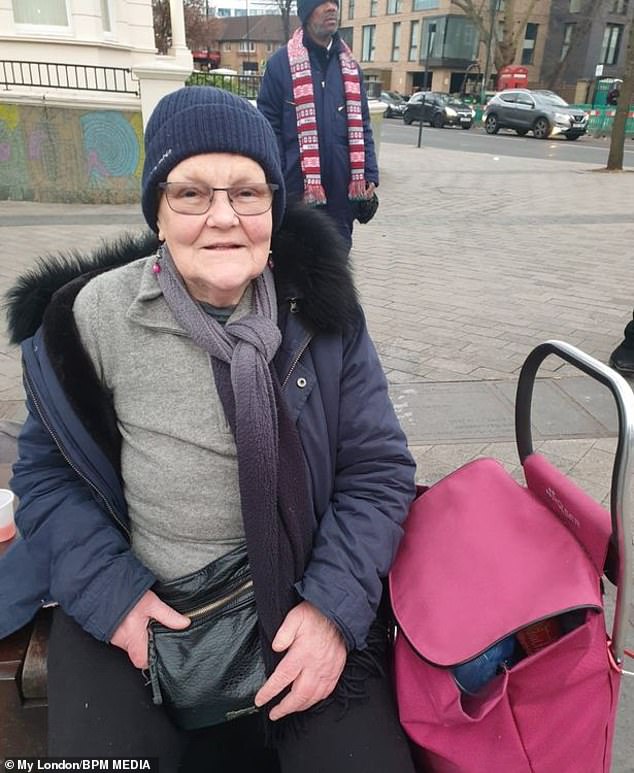 Westminster Council has secured a special injunction from the courts allowing officers to fine those who are deemed to be causing noise and disruption. Pictured: Mary, from Ireland

‘I’ve got mental health problems but I will talk to anyone.’

The last time John visited the coffee shop with a friend, he said his companion was fined £100.

However, this friend also drives John to the chemist to get his prescription.

‘Because he got the ticket from the police, he wont let me get in his car. He’s a bit nervous.’

Mary, 79, has lived in the Maida Vale area for 46 years and enjoys the company and atmosphere of the square.

She said: ‘There’s so many people with mental problems – you don’t even know the half of it.

‘But we were all nice to them, we talk to them, we communicate we make them feel at ease. We sit down with them, we don’t ignore them.

One man, at the heart of the community, is facing court.

Ernest Theophile, known as ‘Popcorn’, was served with an injunction order and is due to appear in court at the end of the month.

He said: ‘Every single day I am there, there is no other place I would want to go to. 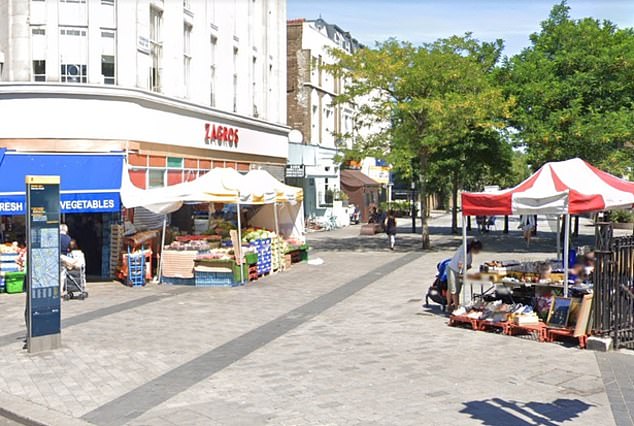 A spokesman told MailOnline the injunction order, which applies to Maida Hill Market, was put in place due to increased anti-social behaviour and noise disruption

‘From when I was eight years of age in this country, it’s the only thing I know.’

The order also mentions ‘persons unknown’, and this has left the community feeling targeted and threatened for simply visiting the square.

Jacqui Haynes, who launched ‘Provide not Punish’, has been trying to work with Westminster Council to bring about some support for the community.

Ms Haynes said: ‘Immediately as the Covid powers came in they thought, ‘Let’s use those emergency powers’.

‘They served him on the Friday and court case on the Monday, they gave him two days.’

Alberto, originally from St Lucia and the West Indies, added: ‘I’ve been living in the area for 40 years, and it’s a place where I’m meeting friends, socialising, and get help from your friends.

‘To me it’s a very friendly atmosphere for all of us, we meet friends and spend time. I go to the square where I can get some information, some help and some advice.

A volunteer who has been checking in on people at the market square explained how locals do not feel heard or looked after.

They said: ‘I’m not saying they’re not rowdy because they are, but if you look at our culture, the black culture, we are loud.

‘Where do you think carnival comes from? Is it not loud and rowdy?

‘But it’s ours, it’s what our parents brought from back home to feel happy in a country that didn’t want them, apart from laying their pavement bricks.

‘We tell them to quieten it down. Behave. That’s what I do.

‘We’ve heard this thing about they throw their paper, their cups and bottles – no they don’t. They put it in the bin and I can vouch for them.

‘There’s a tidy up crew, and if you do throw something on the floor somebody is going to pull you up about it because we are very aware this is our area and like it or not, we have got to keep it clean and tidy.’

The volunteer also spoke of the frustration she felt that the council was reluctant to speak with them about what can be done to help the community.

She said: ‘If they’d called the community, the ones that have lived here, that were born here, that have gone to school here, call a decent meeting and say this is what we’re prepared to do to and help us build on that.

‘Because you cannot think for the person that sits on the square because you do not live their life. You do not know their circumstances, you have to take that on board.

Ms Haynes hopes that something can be done to provide a community hall and address the needs of those in the area.

The campaigner said: ‘If you provide for the people who are there, you’ve got people with mental disabilities displaying behaviours which aren’t necessarily dangerous to people but are misunderstood.

‘The community are the experts on themselves and so why you would think that you can think for them or you would know what they need without even asking them is no real consultation.

‘Provide for us, don’t punish us for finding a way for ourselves and criminalise us.’

A spokesman for Westminster Council told MailOnline: ‘This injunction was put in place due to an increase in anti-social behaviour (ASB) and noise disruption at Maida Hill Market.

‘ASB in this area has increased over time, and, during lockdown, has become an attractive location for large gatherings.

‘The implementation of this injunction gives us the means to help support our local residents who have been subjected to repeated noise and disruption during the day and evenings, which is detrimental to their health and wellbeing.

‘Our previous attempts at community engagement and the serving of various temporary criminal behaviour orders and community protection notices have been unsuccessful, so we have taken this further action.

‘We hope this new, more permanent council-led injunction will help reduce overall ASB in the area, change behaviours and ultimately protect the wellbeing of our residents, which is our priority.’