Good Morning Britain fans turned on Alex Beresford this morning as he stepped into the presenter’s chair, just weeks after his on-air row with Piers Morgan, which ended with the host quitting the show.

Beresford, 40, has been best known on the show for presenting the weather, but joined Kate Garraway front and centre on today’s broadcast – a move which caused a stir with many viewers on social media.

The departure of controversial host Morgan, 55, has seen many vote with their feet, as viewing figures for ITV’s flagship breakfast programme have continued to slide since he stormed off at the start of the month.

Latest figures showed GMB drew in just 840,000 viewers on Thursday – a huge drop since its record-breaking morning of figures on Morgan’s last day, when some 1.29 million tuned in.

While sources told MailOnline Beresford standing in as presenter was not unusual, today’s show drew a fierce reaction online, with many viewers unhappy to see him in the hotseat so soon after the row which went viral.

One wrote: ‘Please no, not Alex. The weatherman in place of Piers is such an insult.’

A second said: ‘Feel @GMB are being totally disrespectful to @piersmorgan – seriously the weatherman trying to present and with a hula hoop.’

Another ranted: ‘Just switched on to see Alex Beresford in Piers Morgan’s seat? I wonder how long he has wanted that?? Since when does a weatherman have the right credentials to be a respected newsreader! I can only assume it’s to appease the Meghan supporters. Shameful after his behaviour!’ 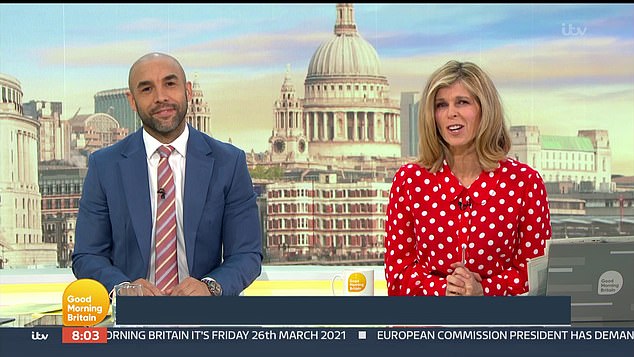 Beresford, 40, has been best known on the show for presenting the weather, but joined Kate Garraway front and centre on today’s broadcast – a move which caused a stir with many viewers on social media 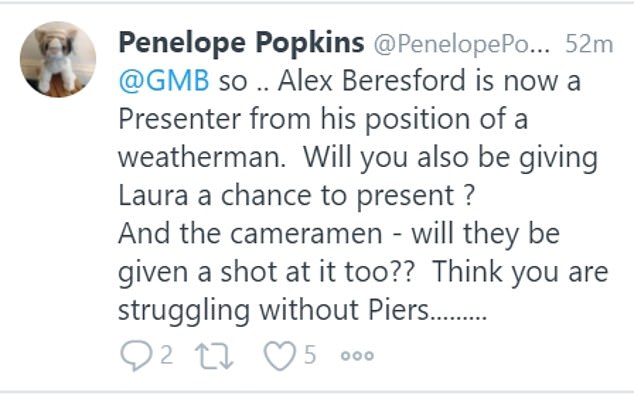 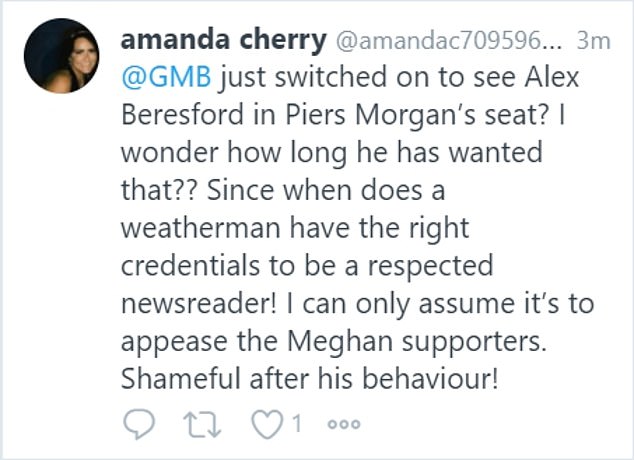 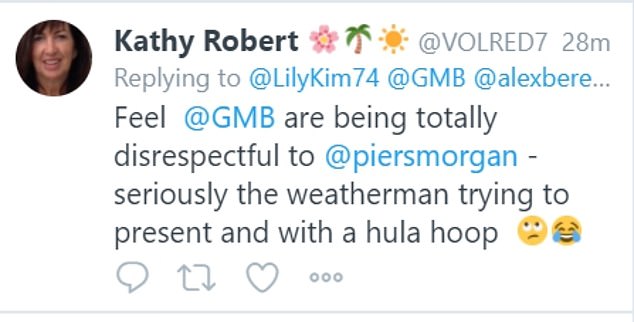 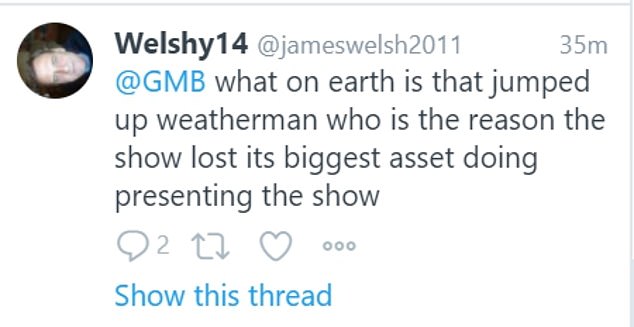 A number of campaigns were set up in the wake of Piers’ shock exit from GMB, and all have garnered hundreds of thousands of signatures – and counting. To date, the petitions have surpassed some 360,000 signatures.

A fourth wrote: ‘What on earth is that jumped up weatherman who is the reason the show lost its biggest asset doing presenting the show?’

Another added: ‘So… Alex Beresford is now a presenter from his position of a weatherman Will you also be giving Laura a chance to present? And the cameramen – will they be given a shot at it too? Think you are struggling without Piers…’

Others were pleased to see Beresford make an appearance, however, with one writing: ‘Fantastic, well done ITV giving someone else a chance to do an excellent job. Good one Alex, nice to see you in the morning, such a pleasure to watch.’

Another added: ‘Middle aged white folks in meltdown over Alex Beresford on GMB literally just doing the job he’s paid to do and doing it well.’

Morgan left the show after he cast doubts on remarks the Duchess of Sussex made during her interview with Oprah Winfrey, in which she talked of suicidal thoughts.

The host clashed with Beresford and stormed out of the studio after being challenged over his position, before announcing he was quitting the show for good just hours later.

He has resolutely stood by his comments and said his departure from GMB was caused by the ‘cancel culture that is permeating our country’.

Hundreds of thousands of fans have called for Morgan to come back to the show, with at least five web pages set up calling on ITV to reinstate the presenter.

Morgan responded to the soaring petitions – which have hit some 360,000 signatures – on Twitter, writing that although the support came as a ‘pleasant surprise’ he will not be returning to GMB. 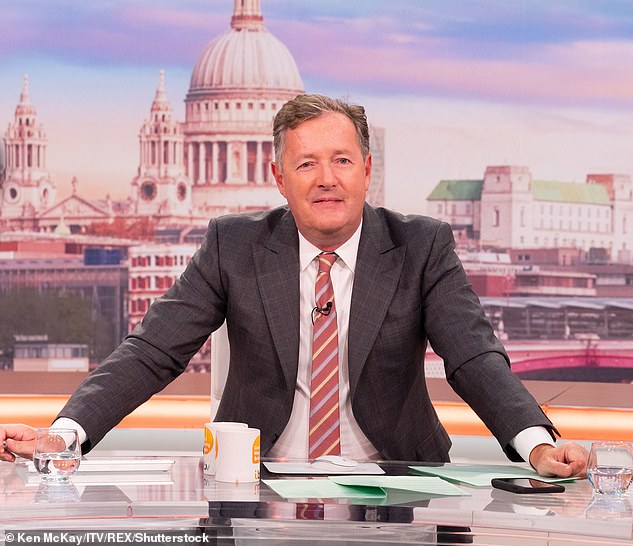 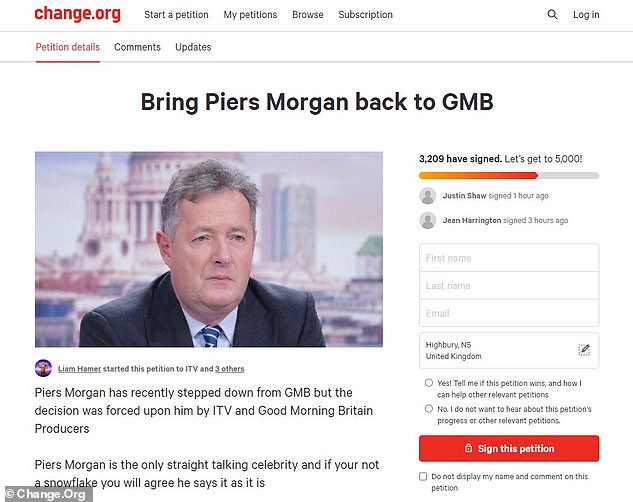 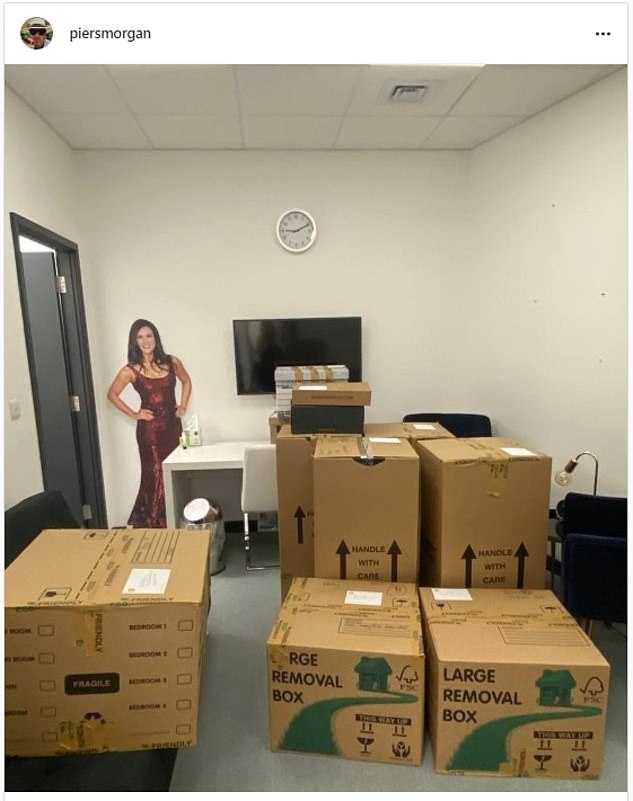 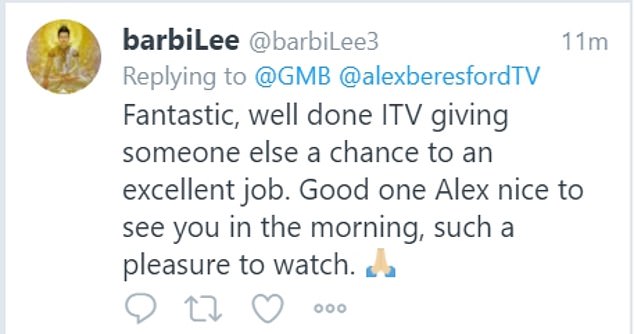 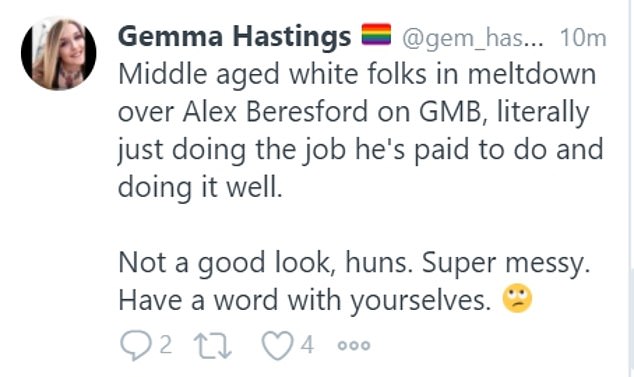 On his last day, the programme scored its highest ever ratings, with some 1.29million viewers.

It was the first time the ITV broadcast had beaten its long-time rival BBC Breakfast, which had 1.25million.

Since then, however, viewing figures have plummeted, with just 840,000 tuning in last Thursday, compared to 1.49million on the rival channel.

Morgan this week cleared out his office at GMB as he said a final goodbye to the programme after five years.

The breakfast host shared an image of cardboard boxes alongside a life size cut-out of Susanna Reid, writing on Twitter: ‘Goodbye, Good Morning Britain! (I think I’ll leave the cardboard cut-out, would be a bit creepy to take that home…’

His co-host Reid replied: ‘End of an era. Thank you for five incredible years of rows, rants & reasons to eye-roll.’