The much-anticipated first live-fire test of the United States Air Force’s new hypersonic missile has been abandoned prior to launch.

The Air Force said a B-52H bomber which was due to test the AGM-183A Air-Launched Rapid Response Weapon (ARRW) in a flight departing from Edwards Air Force Base in California was unable to complete its launch sequence on Monday.

‘The test missile was not able to complete its launch sequence and was safely retained on the aircraft which returned to Edwards AFB,’ he said in a statement emailed to media. 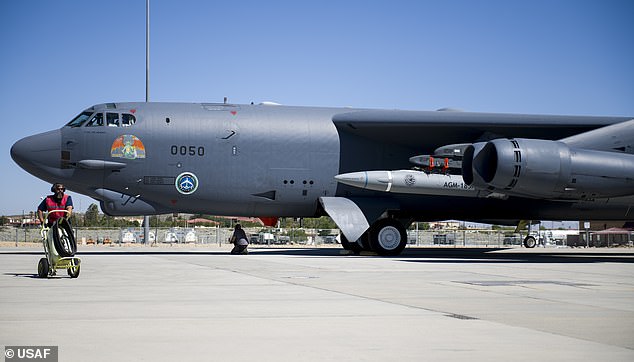 A B-52H aircraft, similar to the one above, was unable to complete its launch sequence and abandoned the first test of a AGM-183A Air-launched Rapid Response Weapon (file photo) 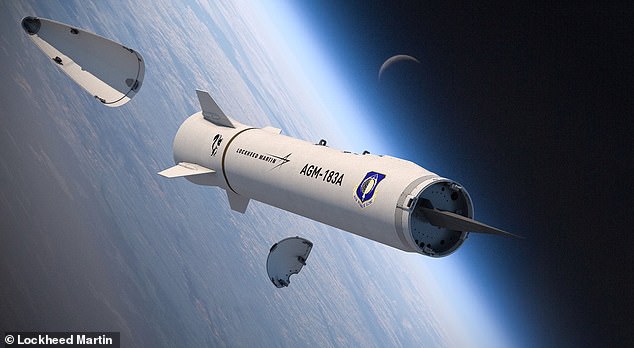 Lockheed Martin released this photo of the AGM-183A Air-launched Rapid Response Weapon (ARRW), showing hypersonic glide warhead, which it was contracted to build for the US Air Force (file photo) 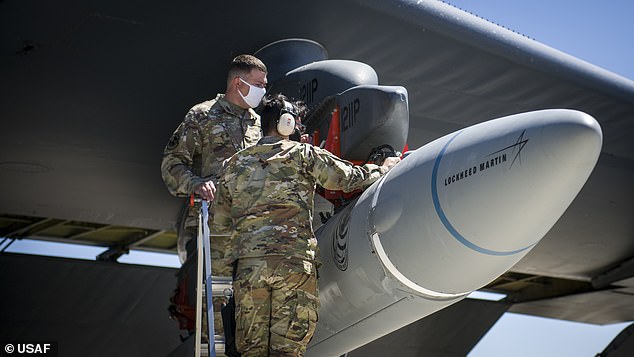 ‘The ARRW program has been pushing boundaries since its inception and taking calculated risks to move this important capability forward. 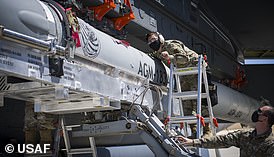 In 2018, Lockheed Martin were awarded an initial $480 million contract to develop a hypersonic missile that could be launched from the air.

By the end of 2020 the company had more than $3 billion in hypersonic-related orders, Lockheed CEO Lockheed CEO Jim Taiclet said recently.

The ARRW is among a wave of ‘new-generation weapons’ to complement B-52 in the coming years, which will  allow the half century-old Cold War-era bombers to remain ‘an important piece of the Pentagon’s arsenal for decades to come’, Defense One reported.

The ARRW’s hypersonic speed is measured as anything greater than five times the speed of sound, or Mach 5.

Currently, only Intercontinental ballistic missiles (ICBMs) reach that speed when they re-enter the atmosphere from space.

But because they travel along a predictable path, they lack the element of surprise.

When the Pentagon’s budget for hypersonic missiles was increased by 23 per cent in February 2020, the Air Force moved ahead with acquiring the AGM-183A.

The ARRW has a potential top speed of 15,345 miles per hour, meaning it could travel around the circumference of the earth in one hour and 37 minutes.

The US Air Force Magazine describes the ARRW as a ‘boost-glide type of hypersonic missile’.

‘The booster accelerates the payload to hypersonic speed, at which point the clamshell front end opens and releases the hypersonic glide vehicle, which flies the rest of the way to the target with no further propulsion, maneuvering along the way.’

In 2019, the United States spent $732 billion on national defense, more than the next 10 countries combined.

‘While not launching was disappointing, the recent test provided invaluable information to learn from and continue ahead. This is why we test.’

The ARRW hypersonic missile is expected to supposed to usher in a new era in US military capabilities.

The test launch had been had been hotly anticipated since the Air Force’s Armament Directorate announced on March 5 that a test would occur within 30 days.

Further signs a test was imminent came when the US Army’s missile range instrumentation ship USAV Worthy arrived at the San Diego Naval Base and airspace restrictions were imposed by the Federal Aviation Administration on an area of the Pacific Ocean near the Point Mugu Sea Test Range.

Missile maker Lockheed Martin, which has a multi-billion dollar contract with the Air Force to produce the missiles, declined to comment ‘due to the classified nature of the program,’ Defense One reported.

The Air Force says it expects the missile program to be operational by the ‘early 2020s’.

White said the new ARRW is meant to be survivable when being fired against ‘heavily defended targets’.

He said the ARRW is a ‘rapid prototyping project that will leverage cutting-edge technologies to deliver a conventional hypersonic weapons capability to the warfighter in the early 2020s’.

The ARRW will be the first hypersonic weapon in the American military arsenal.

In June 2019, the Air Force conducted a captive carry flight test – where the payload does not separate from the carrier aircraft – onboard a B52.

Compared to the Cruise missiles, which have a top speed of about 800kms per hour, the ARRW could be as much as 10 times higher.

The US, China and Russia are all testing prototypes of hypersonic missiles.

China has been conducting tests of its own Xingkong-2 ‘Waverider’ hypersonic cruise missile.

Chinese state media said the Waverider would enable the new weapon to ‘break through any current generation anti-missile defense system.’

The Kremlin’s Admiral Gorshkov frigate has carried out at least four test launches of the new 6,100mph Zircon missile, which is expected to go into service next year and which defence chiefs boasted had ‘hit the bullseye’ in testing.

The two types of hypersonic weapons:

A hypersonic glide vehicle is boosted aloft on a rocket to heights of between 25 miles to 62 miles above the earth before detaching to glide along the upper atmosphere towards its target.

It is released at a height and speed that would allow it to glide unpowered to the target.

Control surfaces on the glide vehicle mean it can steer an unpredictable course and maneuver sharply as it approaches impact.

These glide vehicles follow a much flatter and lower trajectory than the high, arching path of a ballistic missile.

These missiles are powered by high-speed, air-breathing engines after acquiring their target.

While they have internal engines, unlike regular cruise missiles, they travel far faster and higher.