US economy set to roar back to life this year, declares Federal Reserve… but central bank chief insists that interest rates will not rise until 2024

The US economy is set to roar back to life this year as it recovers from the Covid pandemic, the Federal Reserve declared last night.

In a bullish update, the world’s most powerful central bank pencilled in economic growth of 6.5 per cent for 2021, up from an earlier estimate of 4.2 per cent at Christmas. 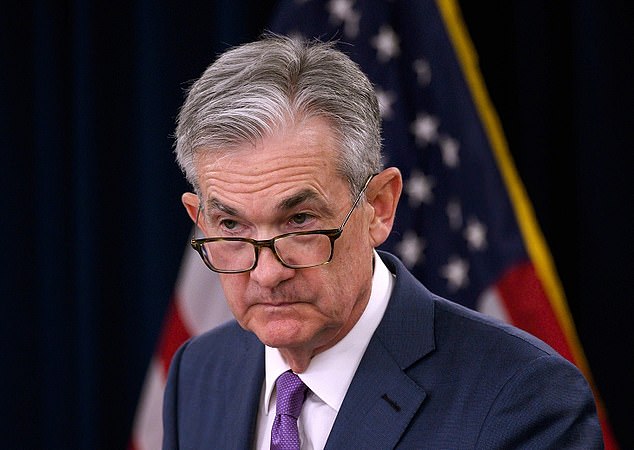 Confident: The US Federal Reserve, led by chairman Jerome Powell (pictured) pencilled in economic growth of 6.5 per cent for 2021, up from an estimate of 4.2 per cent at Christmas

The measures will put money directly into Americans’ bank accounts and help to avert economic damage.

The forecasts are ahead of the UK, with Chancellor Rishi Sunak predicting growth of 4 per cent this year and 7.3 per cent in 2022 in his Budget this month.

The Fed also sees inflation in the US edging higher this year to 2.4 per cent, exceeding its target of 2 per cent.

But despite the economic bounceback and inflation rise, the Fed continues to project no interest rate increases until 2024.

Fed chairman Jerome Powell said: ‘No one should be complacent. Indicators of economic activity and employment have turned up recently, although the sectors most adversely affected by the pandemic remain weak.’

Bond investors have become jittery of late amid expectations that massive fiscal support and a fast recovery could have led to rate rises this year.

As a result borrowing costs on financial markets have shot higher and the US ten-year Treasury yield rose above 1.68 per cent early yesterday, before slipping back.

The equivalent gilt yields in the UK, a key measure of how much it costs the Government to borrow, have also been rising as confidence in the economy recovers.

Powell said the Fed was tracking the activity in the bond markets. He added: ‘We are always attentive to market conditions. I would be concerned by disorderly conditions in markets.

‘For now we think our accommodative stance is appropriate.’

Neil Wilson, analyst at Markets, said: ‘It’s truly remarkable that the Fed can say the economy will rebound by 6.5 per cent this year and not change policy.

The Fed’s forecasts come as Biden focuses on getting people back to work.

Unemployment soared last year when the pandemic struck, hitting 14.7 per cent in April.

Since then employment has picked up, with joblessness falling to 6.2 per cent in February, and unemployment is now forecast to fall to around 4.5 per cent by the end of the year.

Powell said: ‘There are in the range of 10m people who need to get back to work.

‘Realistically, given the numbers, it’s going to take time.’

Hinesh Patel, portfolio manager at Quilter Investors, said there was ‘a long way to go’ before the Fed raises rates.

He added: ‘The Federal Reserve wants to support ‘Main Street’, which means supporting the economy back to record low unemployment.

‘The Fed will be hoping the latest stimulus package will be the beginning of a big reboot.’

The Bank of England is today expected to leave interest rates in the UK on hold at a record low of 0.1 per cent.

The decision comes amid concerns about increasing inflation in the UK and the Government’s ability to service the huge pandemic bill.