A thrilling finish to an AFL game has been marred by ugly scenes in the crowd as a furious Collingwood supporter tried to jump the fence to confront umpires.

Brisbane Lions young gun Zac Bailey kicked a goal after the siren to snatch a one-point win against the Magpies at Docklands Stadium in Melbourne on Thursday.

Footage filmed moments afterwards shows an unruly Magpies fan trying to jump the fence and then reach out at umpires as they made their way from the field.

‘It’s a f*****g joke,’ he can be heard yelling as he’s held back and restrained by several stadium security guards. 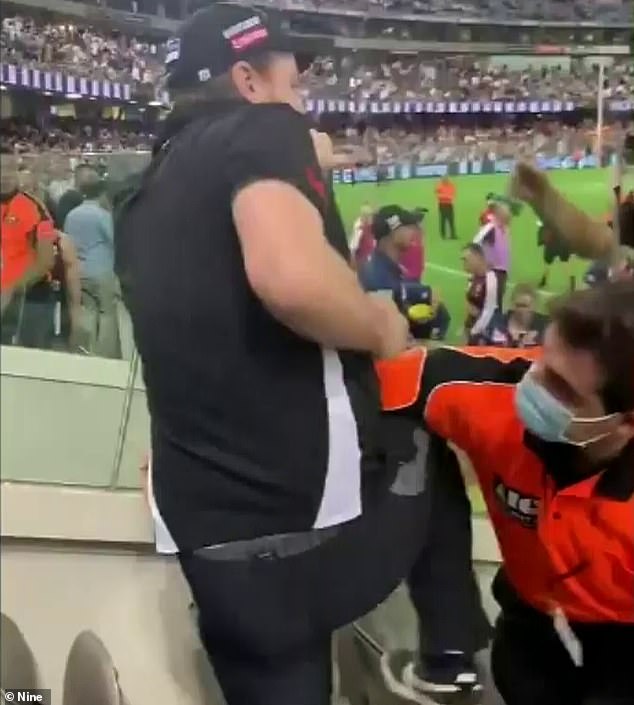 The distressing scenes unfolded in front of young children, including a distraught boy who had to be shielded from the drama by his father, who carried the little boy out of the stadium.

The footage was filmed by 3AW radio boundary rider Jacqui Reed, who expressed her outrage on Twitter after the match.

‘These are the scenes post-match tonight,’ Reed wrote.

‘Super scary when you’re wearing headphones and don’t hear anyone coming and suddenly they’re right in front of you! Well done to the security guard.’ 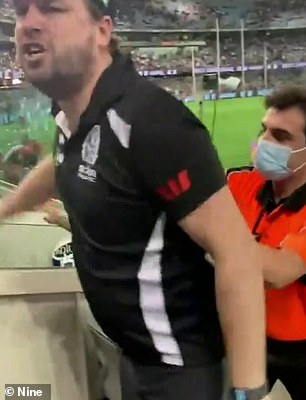 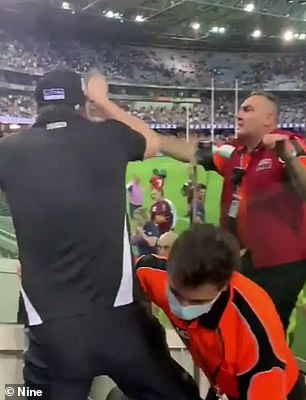 ‘It’s a f**king joke,’ he can been heard yelling as he’s held back and restrained by stadium security

Daily Mail Australia has contacted the AFL and Collingwood for comment.

Victoria Police were unaware of any reports of the incident at the stadium.

The game was originally scheduled to be a Lions home game at the Gabba but was relocated to Melbourne due a coronavirus outbreak in Brisbane, which sparked a three day lockdown.

The come from behind victory was the Lions’ first win for 2021 and Collingwood’s second loss from the first three rounds.