A young Ukrainian woman was shot and killed in her car on her way back from delivering food to a local dog shelter outside of Kyiv.

Anastasiia Yalanskaya was one of three volunteers who made the dangerous trek to a local dog shelter in Bucha – 18 miles outside of Kyiv and close to Ipren, where many have begun evacuating- when her car was deliberately targeted by Russian forces on Thursday with ‘heavy weaponry’, her family said.

Her last Instagram story reportedly showed her sitting in the back of the vehicle, surrounded by bags of dog food.

‘We bought food for volunteer dogs that were left without the right food,’ she wrote on Telegram on March 1. 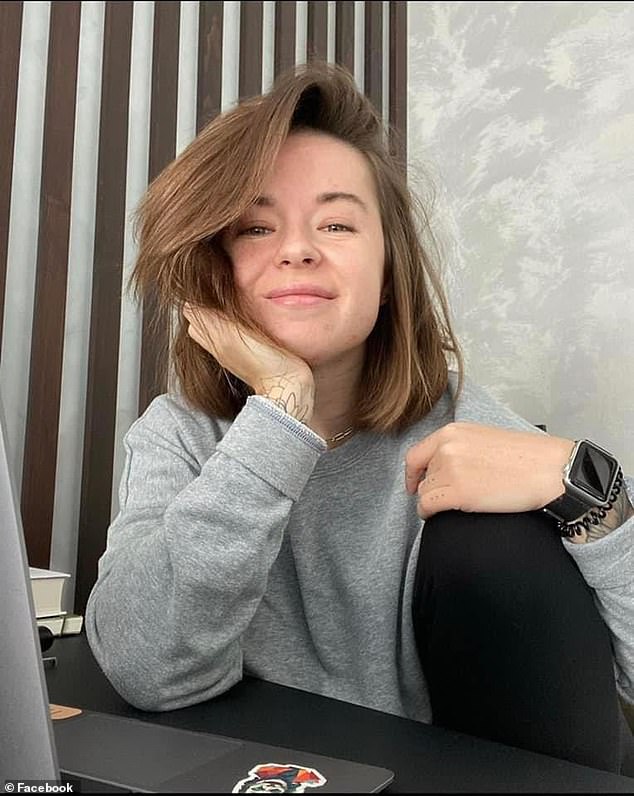 Anastasiia Yalanskaya was shot and killed on Thursday, alongside two other volunteers, after dropping off dog food to a local shelter in Bucha, Ukraine – 18 miles outside of Kyiv 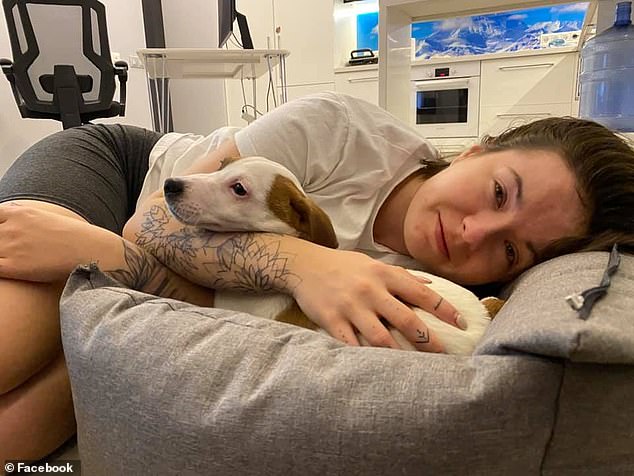 The animal lover was almost home when Russian forces targeted her car and used ‘heavy weaponry’ and shot bullets through her car, killing all three of them 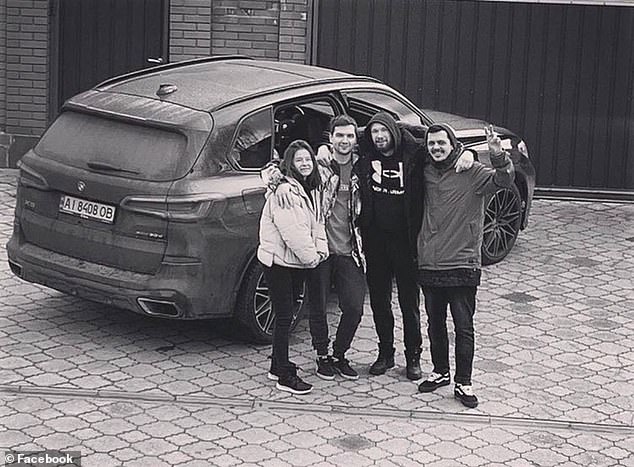 Yalanskaya pictured with a group of men at an unknown time

It is unknown by her car was targeted, but her friends and family believe Russian troops are targeting more civilians. As of March 1, around 750 Ukrainian civilians have died because of the war.

Bucha has been in the crosshairs of Russian warfare for days and the shelter Yalanskaya was reportedly traveling to had already gone without food for three days.

‘I asked her to be extra cautious,’ her estranged husband Yevhen Yalanskyi reported told her, according to the New York Post. That nowadays, a mistake costs extremely much, but she was helping everyone around. I asked her to think of evacuation but she did not listen.’

Her friend Anastasiia Hryshchenko, who evacuated to Vinnytsia, had been in constant contact with Yalanskaya and had contacted one of the other volunteers when she had heard from her in several hours. He informed her he found the car near one of the volunteers’ homes and they didn’t make it.

Her car was found not far from her home, covered in bullets and her body was taken to a nearby morgue. 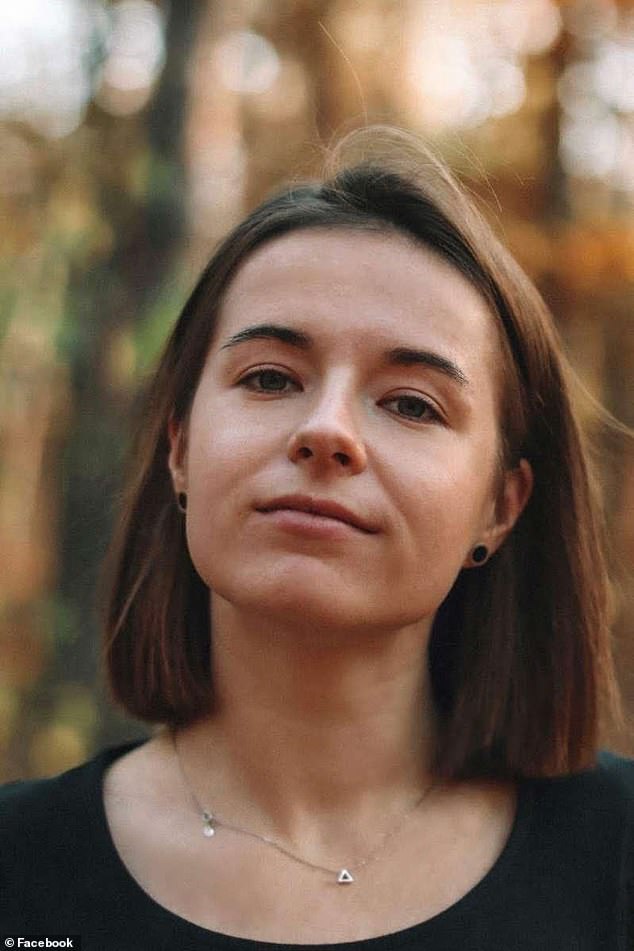 ‘I asked her to be extra cautious,’ her estranged husband Yevhen Yalanskyi had told her before she went on the trip 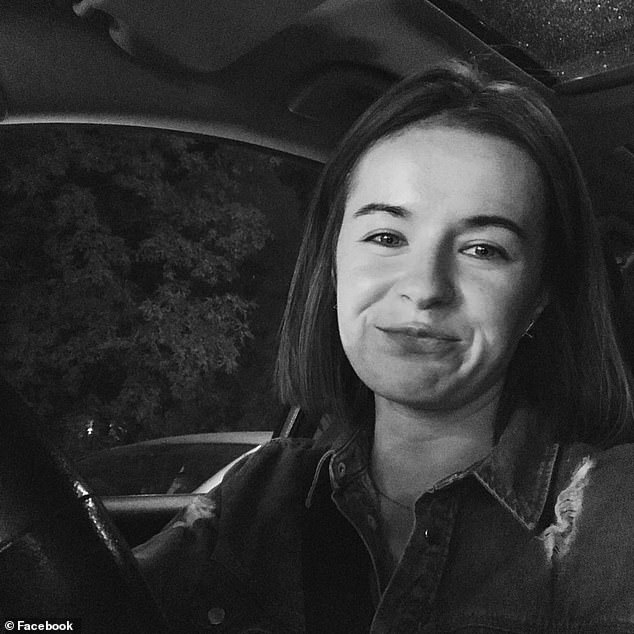 ‘I asked her to be extra cautious,’ her estranged husband Yevhen Yalanskyi had told her before she went on the trip

‘Not being able to help her last journey is very painful for me,’ her estranged husband said from Sri Lanka. ‘She was one of the best human beings I knew. She was committed to help, to help her friends and relatives and whoever needed help.

‘She loved animals. We had a dog and a cat. She was the best partner I ever had.’

Only days earlier,  Yalanskaya had detailed her gruesome realities with the war, writing on Telegram on February 24: ‘I wish us peace. I don’t know what to say anymore. We are chained to the news all day long.’

On February 27, she informed her followers that she was ‘spending the night in the car in the underground parking’ to avoid bombs that were going off in the area. She still seemed hopeful as she wrote: ‘They will agree anyway. Sooner or later. Please let it be early, not late.’

On February 28, she went outside for the first time since the war began and said she ‘wouldn’t forget this feeling.’

‘I never considered myself a big fan of the Armed Forces of Ukraine or a patriot. Today, having talked several times with the guys who are standing at the checkpoints, I realized how cool they are,’ she continued. ‘For the first time in my life, I was proud of the country in which I live and for the people who are nearby. It is unfortunate that this happened under such conditions.’

On March 1, the kind-hearted Ukrainian visited a kindergarten class in Brovary, ‘where about 40 children were left without food and auxiliary items, such as diapers and napkins.’

On March 3, she said shared her haunting experience of traveling by car to help others. She detailed how she had to ‘drive with the window ajar in order to hear from which side and with what intensity the shelling is going on,’ and how ‘nausea from fear is not a myth.’

‘Blown up bridges and roads are terrible, houses destroyed by rockets, it’s monstrous,’ she wrote. ‘If there is a sign [that says] “do not slow down” – you must obey. And then moving [on] the Zhytomyr highway you can hear an explosion of some unknown garbage right next to the wheels. 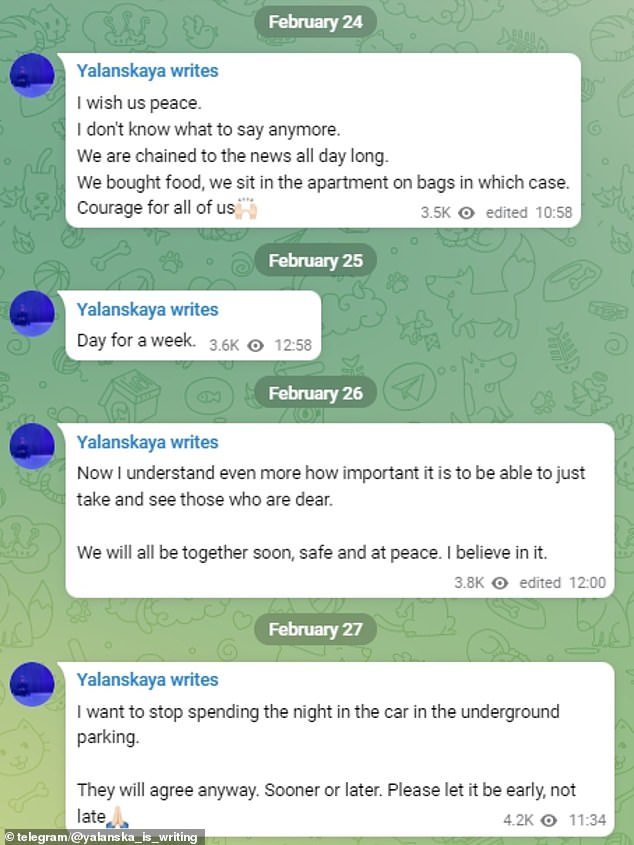 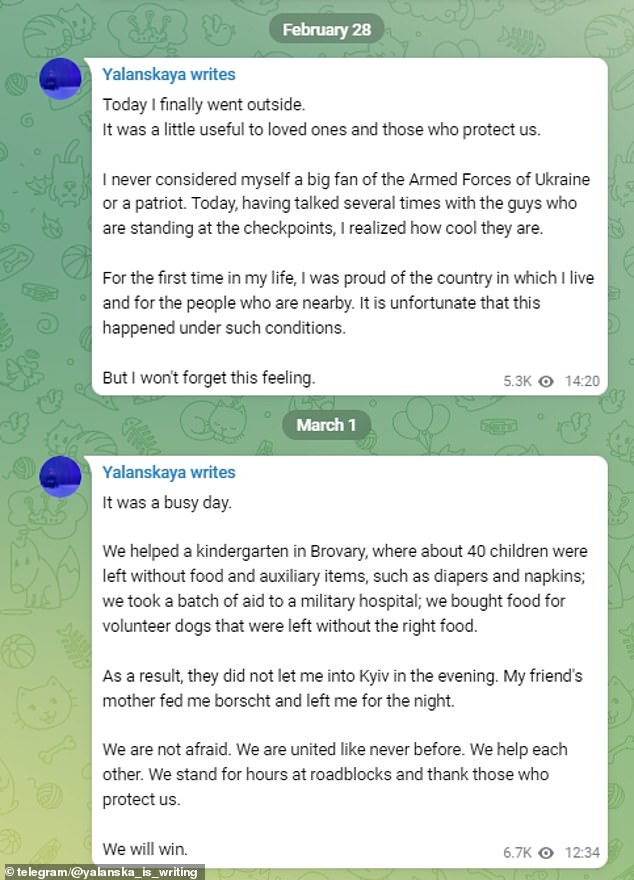 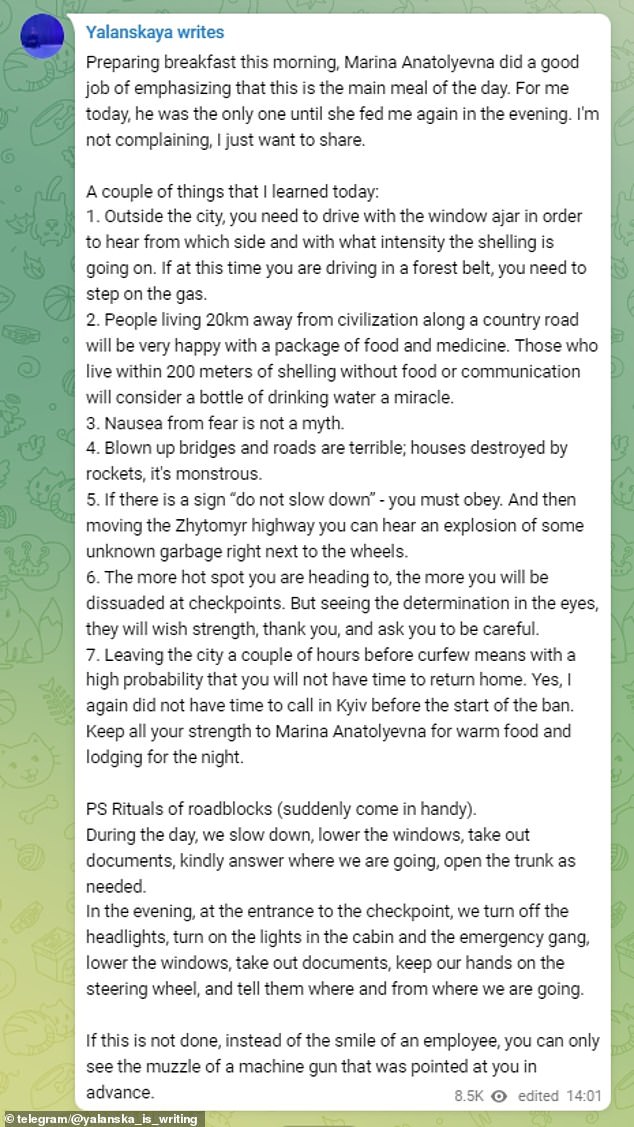 She documented her experiences with the war on Telegram. Writing the day before her death, she detailed trying to get to Irpen, but couldn’t because of the blown-up bridge. She said: ‘Tomorrow we’ll try to go the other way’

‘The [farther into the] hot spot you are heading to, the more you will be dissuaded at checkpoints. But seeing the determination in their eyes, they will wish strength, thank you, and ask you to be careful.’

She continued: ‘In the evening, at the entrance to the checkpoint, we turn off the headlights, turn on the lights in the cabin and the emergency gang, lower the windows, take out documents, keep our hands on the steering wheel, and tell them where and from where we are going.

‘If this is not done, instead of the smile of an employee, you can only see the muzzle of a machine gun that was pointed at you in advance.’

A day before her death, she detailed her failed trip to Irpen and how the bridge was ‘blown up.’

‘Tomorrow we’ll try to go the other way.’ She died the next day.