Volodymyr Zelensky has vowed that ‘God will not forgive’ and Ukraine ‘will not forget’ the slaughter of civilians by Russian, saying a ‘day of judgement’ is coming for them as cities were hit by fresh bombardments this morning with Vladimir Putin’s invasion entering its twelfth day.

He spoke as Russia today claimed it is opening new ‘humanitarian corridors’ out of surrounded cities including Mariupol, Kharkiv, Sumy and Kyiv starting at 7am UK time in order to allow civilians to evacuate – though few expect Putin’s men to observe the temporary truce after two similar corridors failed at the weekend.

‘Instead of humanitarian corridors, they can only make bloody ones,’ Zelensky said, as Interior Ministry adviser Anton Gerashchenko added: ‘There can be no “green corridors” because only the sick brain of the Russians decides when to start shooting and at whom.’ 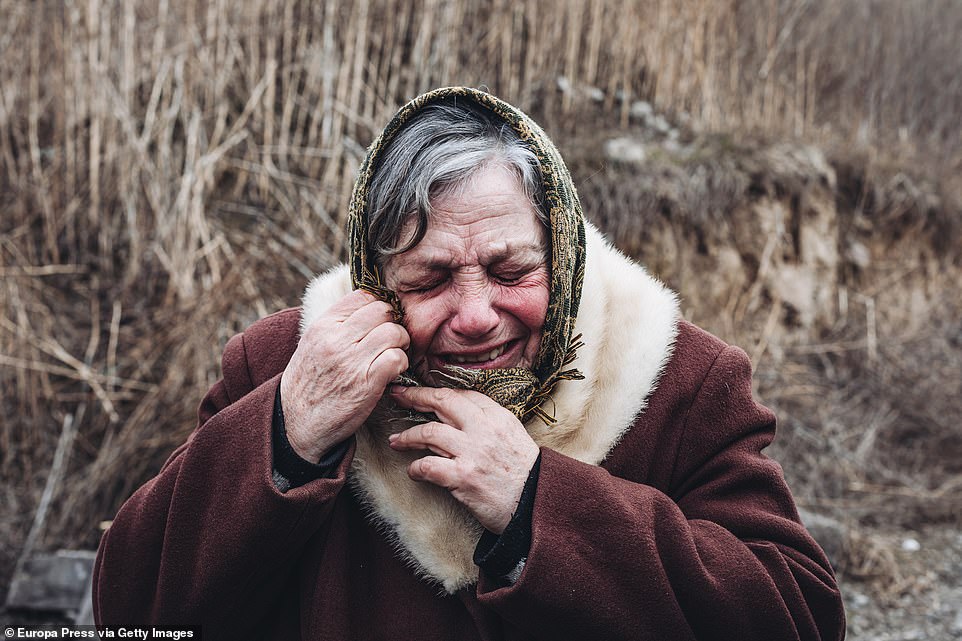 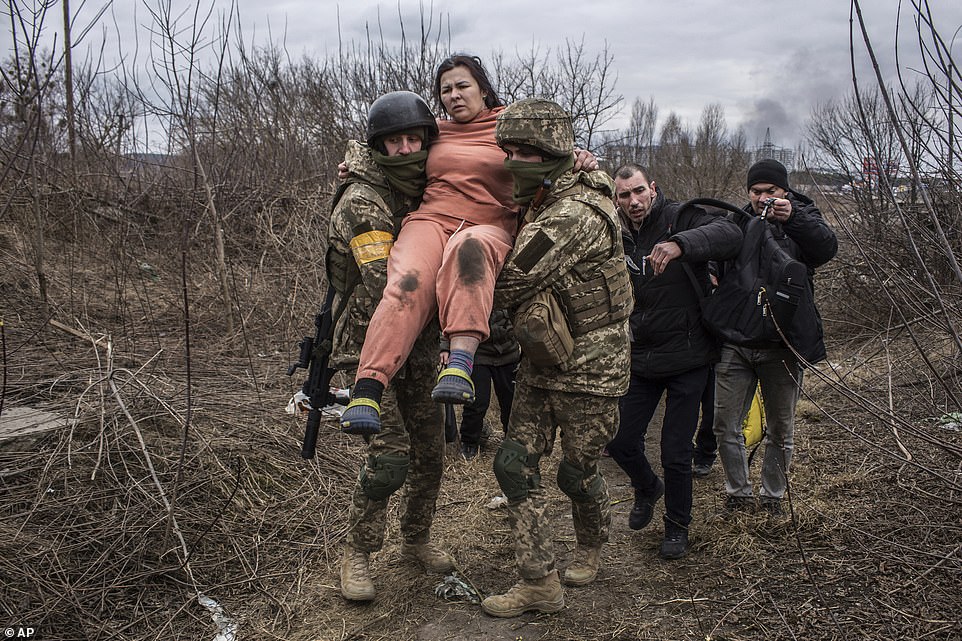 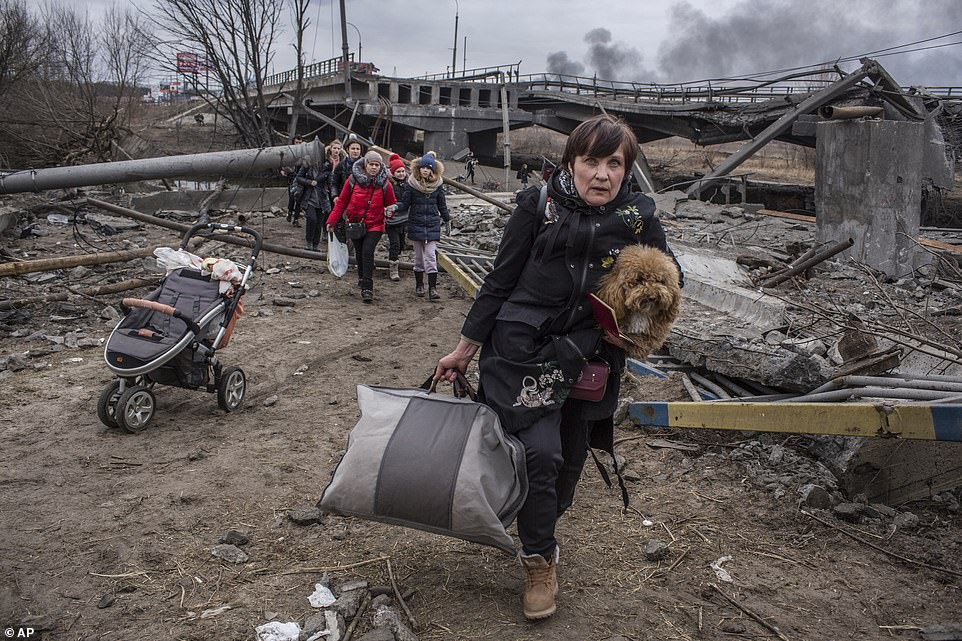 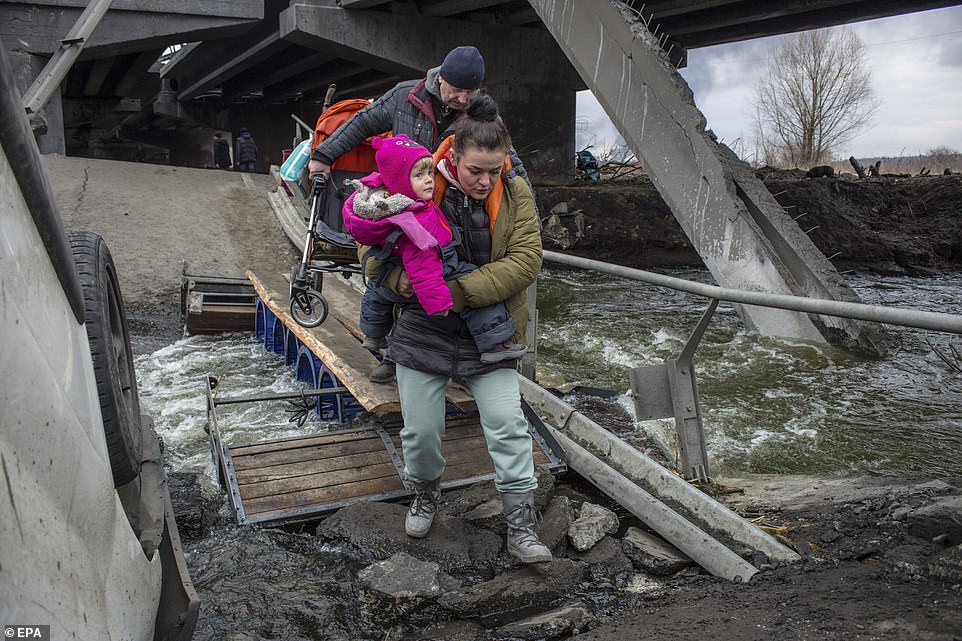 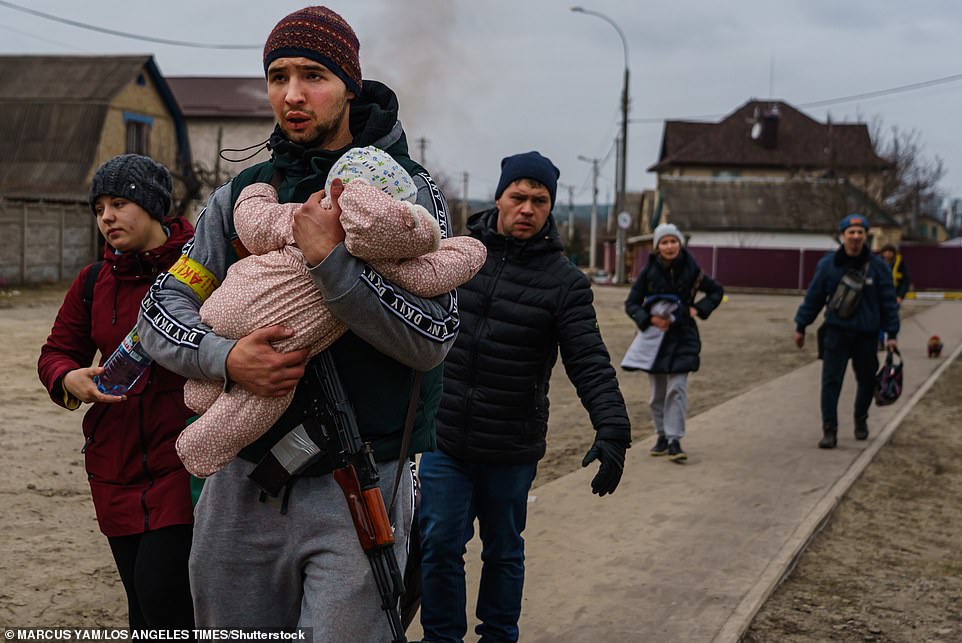 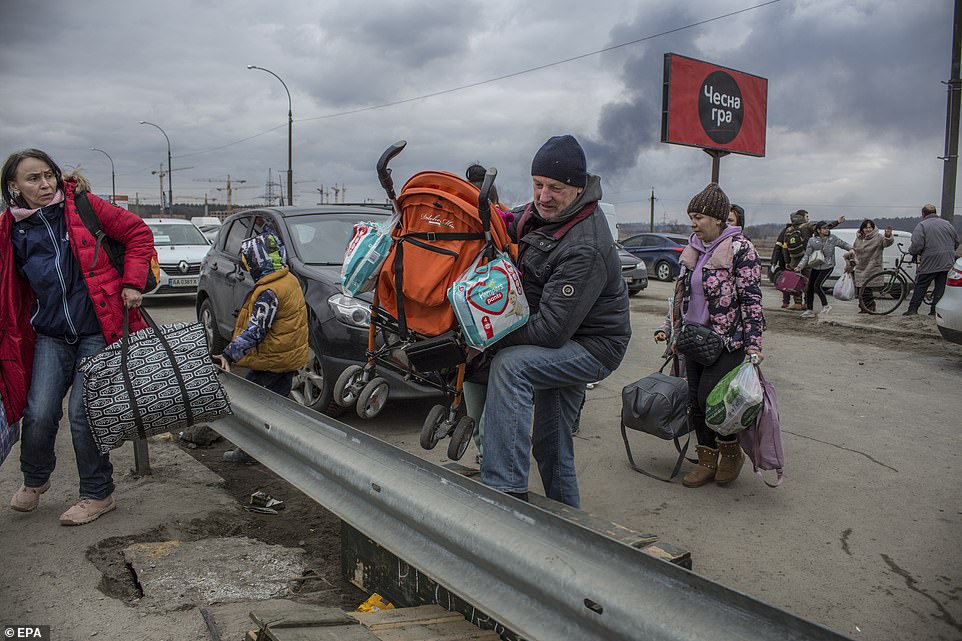 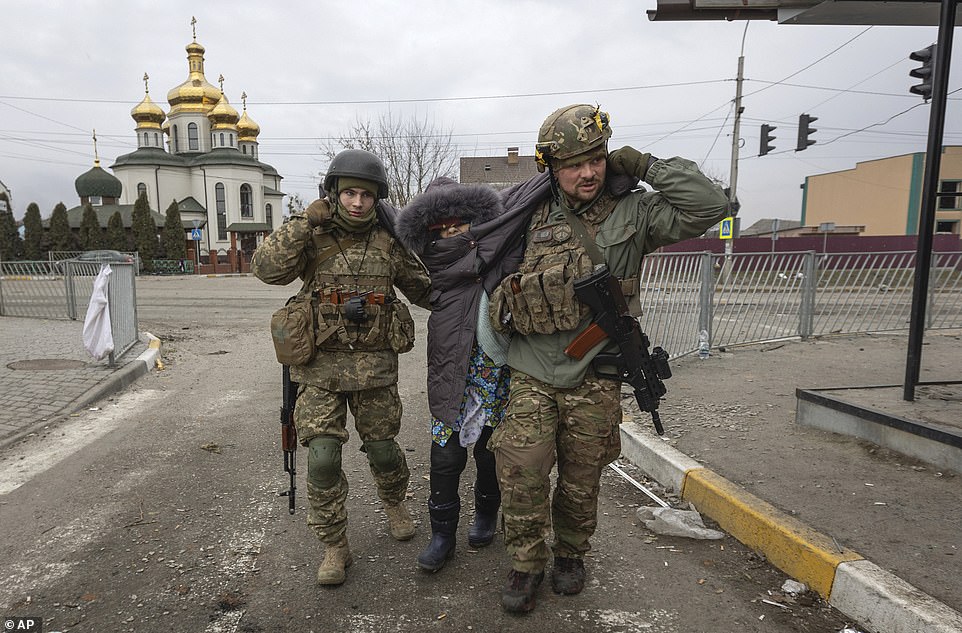 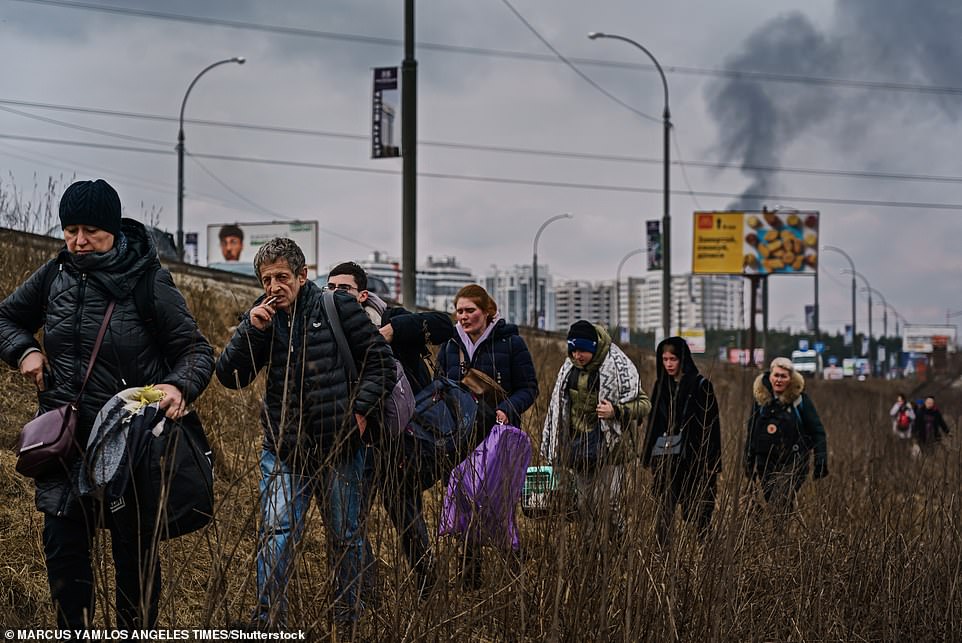 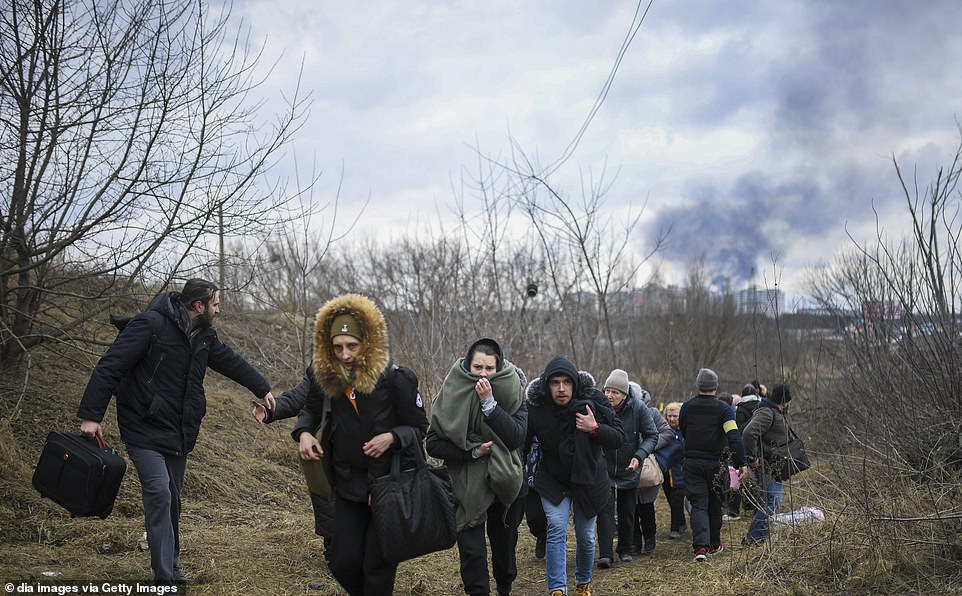 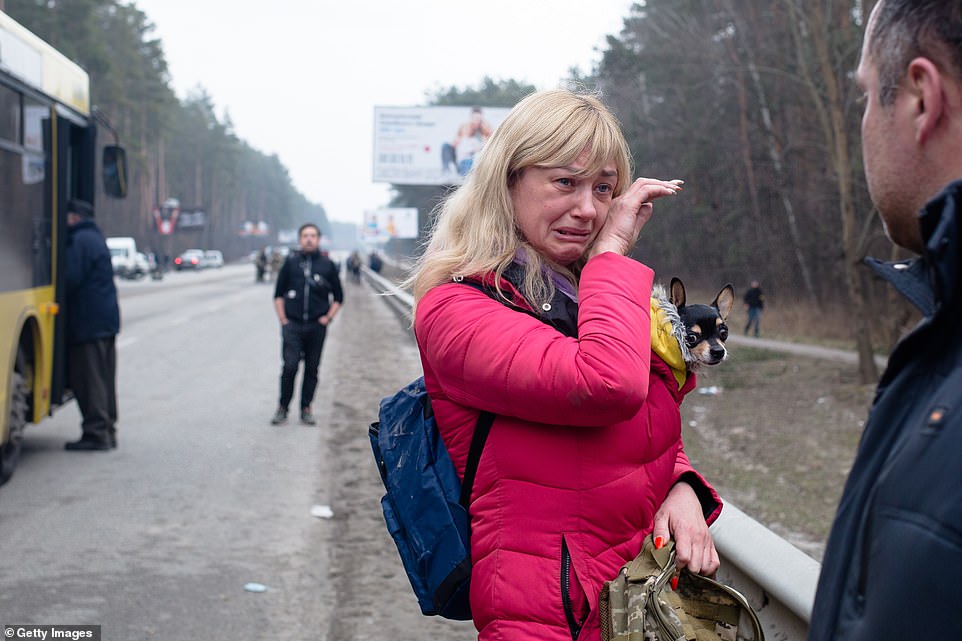 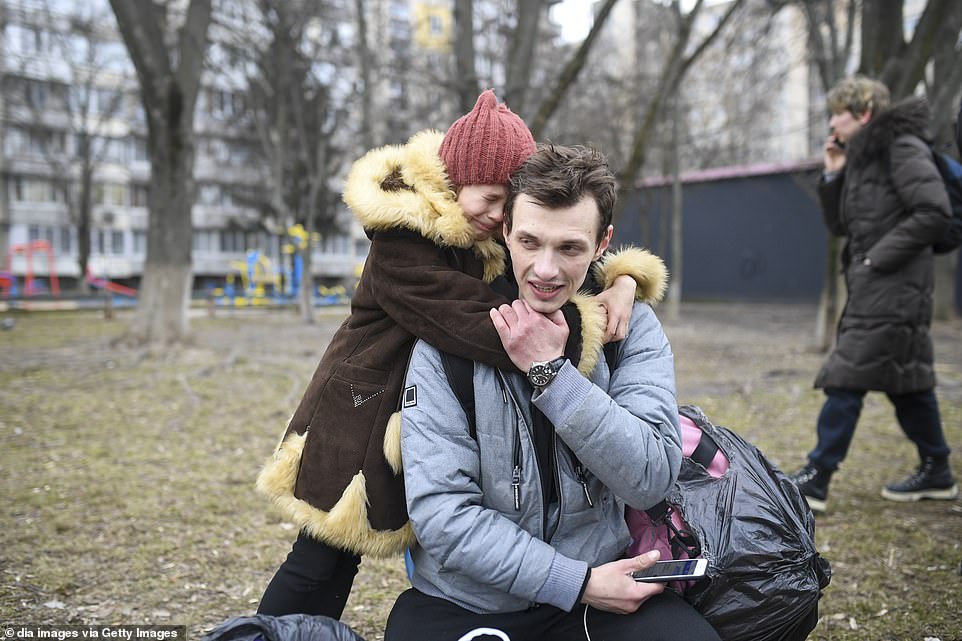 Even as Russia announced a ceasefire starting Monday morning and the opening of humanitarian corridors in several areas, its armed forces continued to pummel Ukrainian cities, with multiple rocket launchers hitting residential buildings.

The limited ceasefire announcement came a day after hundreds of thousands of Ukrainian civilians attempting to flee to safety were forced to shelter from Russian shelling of cities in Ukraine’s center, north and south. Officials from both sides planned a third round of talks Monday.

Russian forces continued their offensive, opening fire on the city of Mykolaiv, 480 kilometers south of the capital of Kyiv, Ukraine’s General Staff said Monday morning. Rescuers said they were putting out fires in residential areas caused by rocket attacks.

Shelling also continued in the suburbs of Kyiv, including Irpin, which has been cut off from electricity, water and heating for three days.

‘Russia continues to carry out rocket, bomb and artillery strikes on the cities and settlements of Ukraine,’ the General Staff said. ‘The invaders continue to use the airfield network of Belarus to carry out air strikes on Ukraine.’

The Russians have also been targeting humanitarian corridors, taking women and children hostage and placing weapons in residential areas of cities, according to the General Staff.

A Russian task force said a ceasefire would start Monday morning, the 12th day of the war, for civilians from Kyiv, the southern port city of Mariupol, Kharkiv, Ukraine’s second-largest city, and Sumy. It wasn’t immediately clear if fighting would stop beyond the areas mentioned in the task force’s statement, or when the ceasefire would end.

The announcement follows two failed attempts to evacuate civilians from Mariupol, from which the International Committee of the Red Cross estimated 200,000 people were trying to flee. Russia and Ukraine have traded blame for the failure. The Russian task force said Monday’s ceasefire and the opening of the corridors was announced at the request of French President Emmanuel Macron, who spoke to Russian President Vladimir Putin on Sunday.

Evacuation routes published by Russia’s RIA Novosti news agency, citing the Defense Ministry, show that civilians will be able to leave to Russia and Belarus. Russian forces will be observing the ceasefire with drones, the task force said.

Putin said Moscow’s attacks could be halted ‘only if Kyiv ceases hostilities.’ As he has often done, Putin blamed Ukraine for the war, telling Turkish President Recep Tayyip Erdogan on Sunday that Kyiv needed to stop all hostilities and fulfill ‘the well-known demands of Russia.’

Putin launched his invasion with a string of false accusations against Kyiv, including that it is led by neo-Nazis intent on undermining Russia with the development of nuclear weapons. 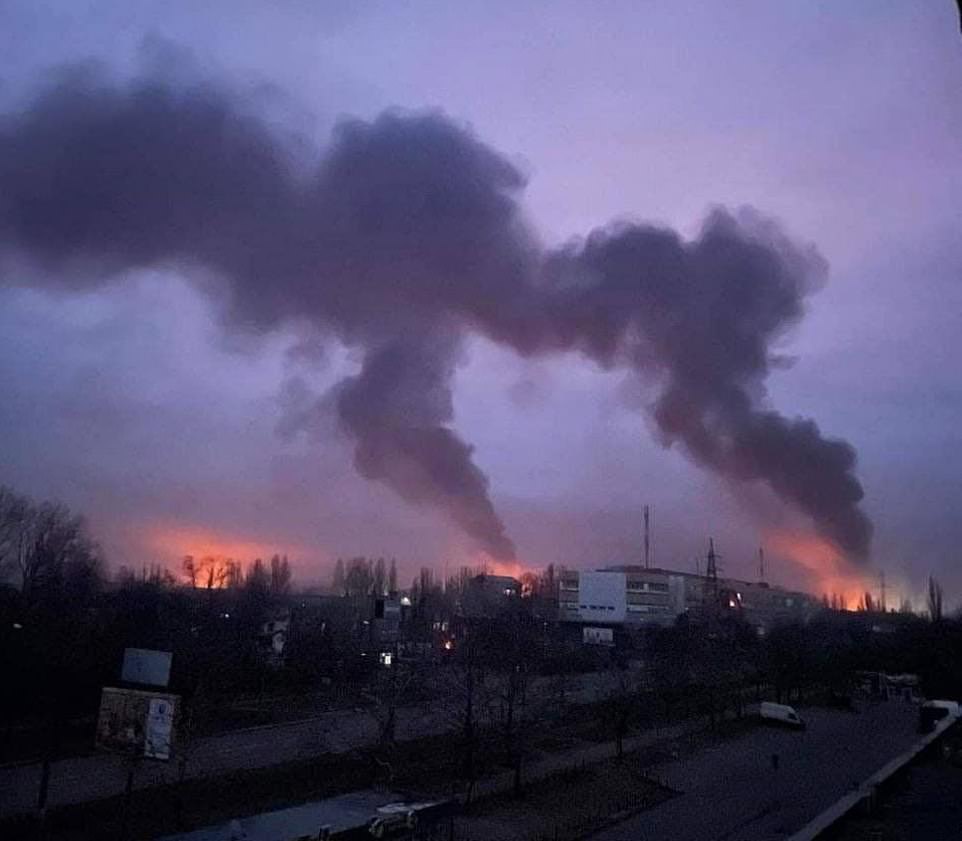 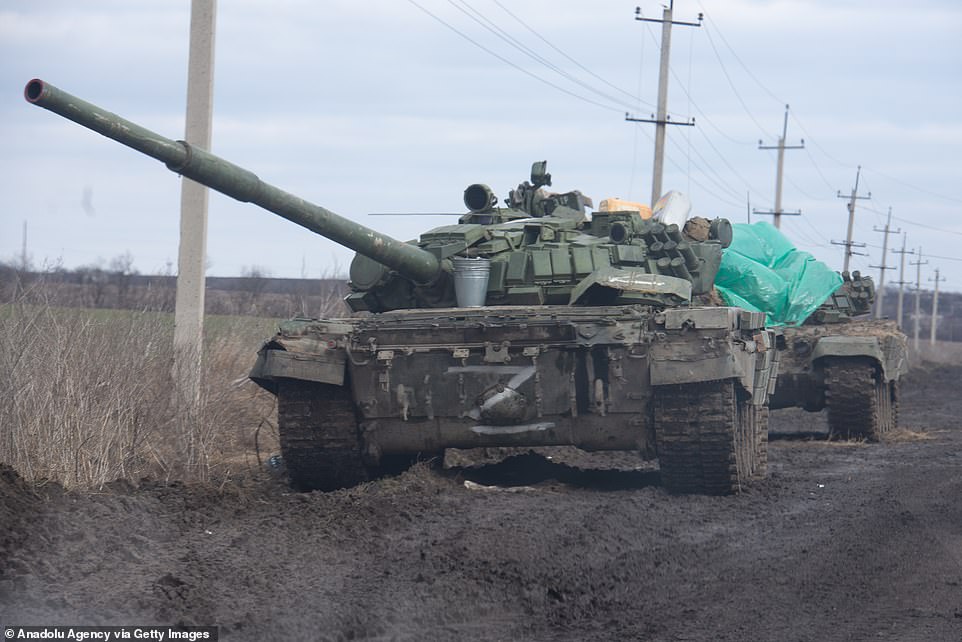 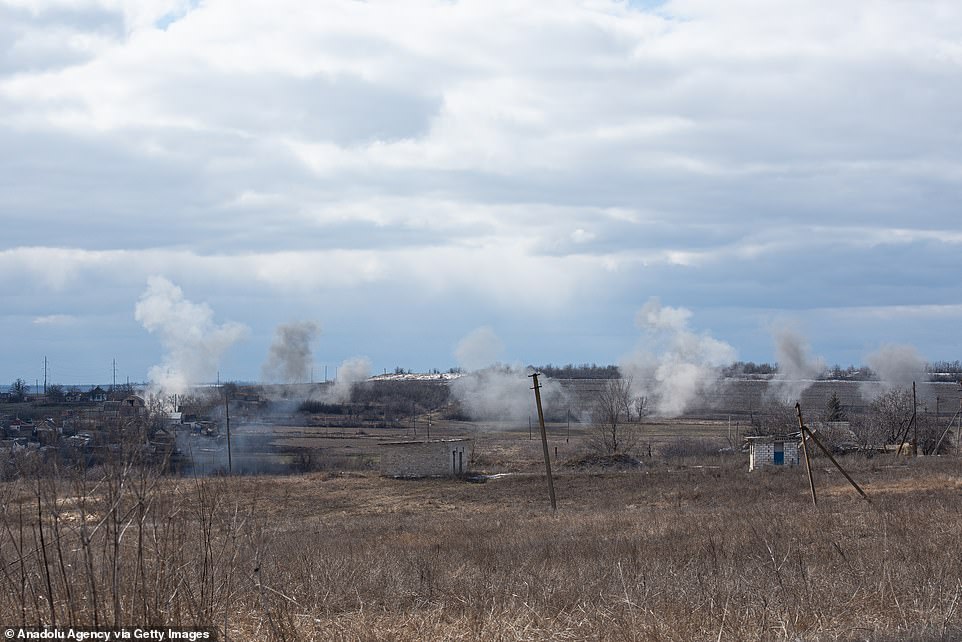 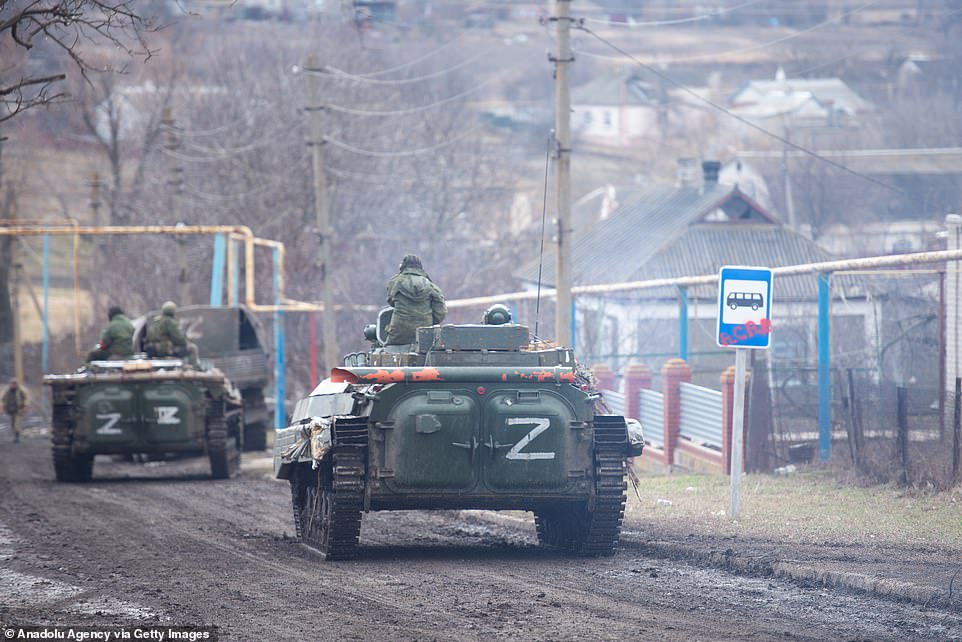 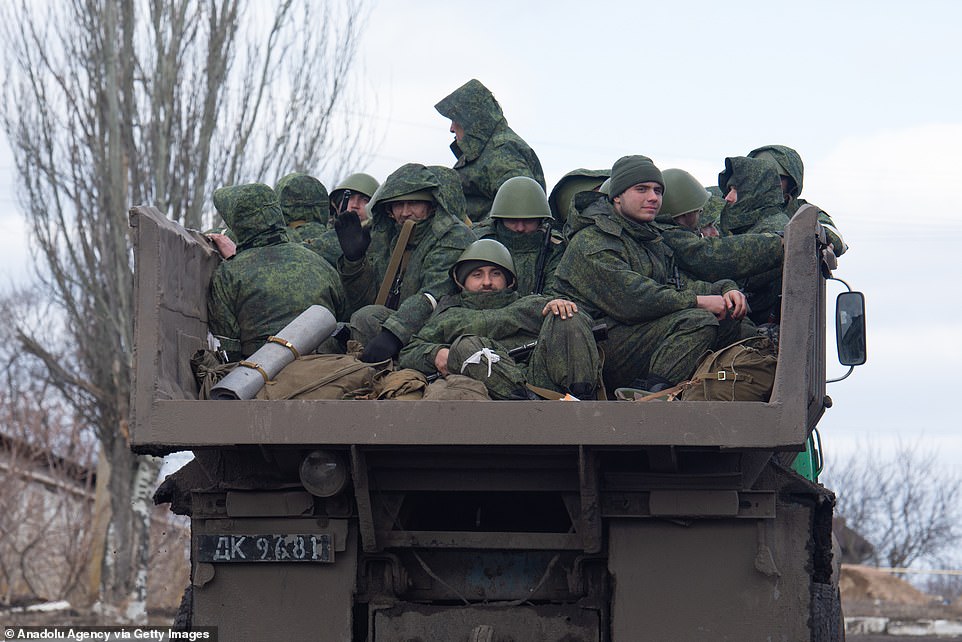 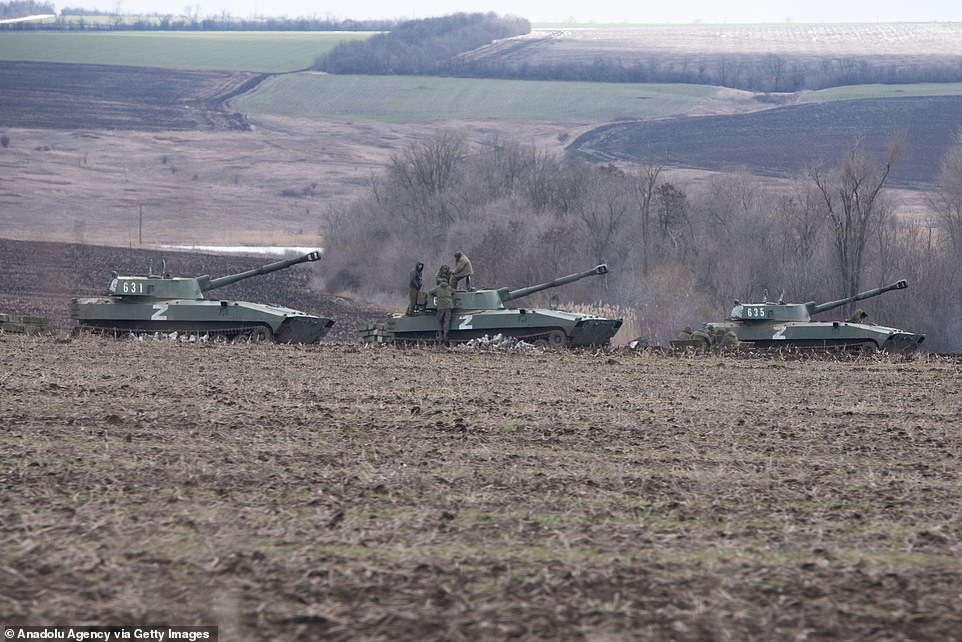 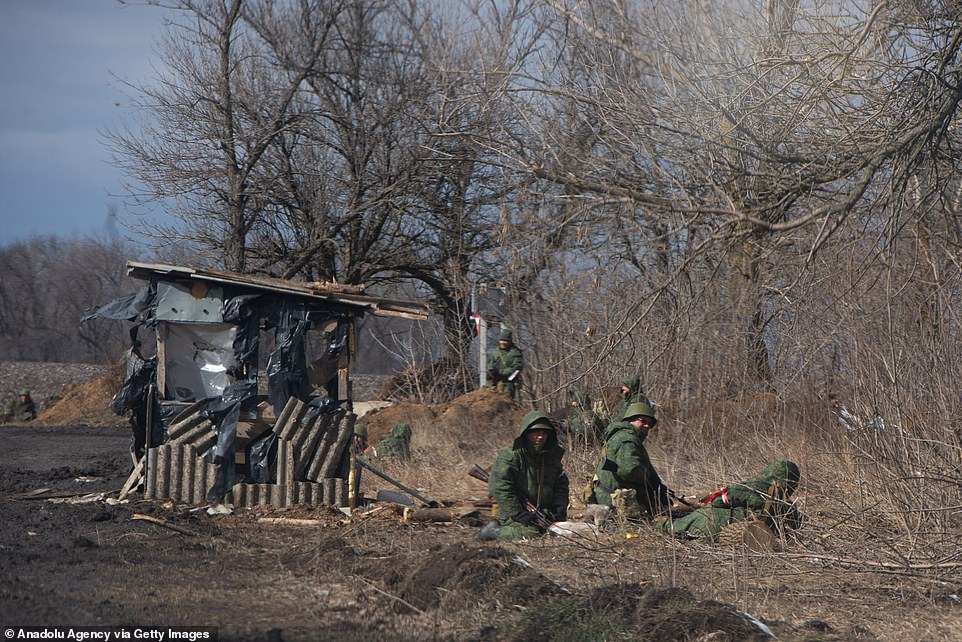 Presidential adviser Oleksiy Arestovich described a ‘catastrophic’ situation in the Kyiv suburbs of Bucha, Hostomel and Irpin, where efforts to evacuate residents on Sunday failed. About eight civilians, including a family, were killed by Russian shelling in Irpin, according to Mayor Oleksander Markyshin.

Video footage showed a shell slamming into a city street, not far from a bridge used by people fleeing the fighting. A group of fighters could be seen trying to help the family. Arestovich said the government was doing all it could to resume evacuations.

‘This is likely to represent an effort to break Ukrainian morale,’ the U.K. Ministry of Defense said of Russian tactics as the war entered its 12th day Monday. Fighting has caused 1.5 million people to flee the country, which the head of the U.N. refugee agency called ‘the fastest-growing refugee crisis in Europe since World War II.’

British military officials compared Russia’s tactics to those Moscow used in Chechnya and Syria, where surrounded cities were pulverized by airstrikes and artillery.

Food, water, medicine and almost all other supplies were in desperately short supply in Mariupol, where Russian and Ukrainian forces had agreed to an 11-hour cease-fire that would allow civilians and the wounded to be evacuated. But Russian attacks quickly closed the humanitarian corridor, Ukrainian officials said.

The handful of residents who managed to flee the city before the humanitarian corridor closed said the city of 430,000 had been devastated.

‘We saw everything: houses burning, all the people sitting in basements,’ said Yelena Zamay, who fled to one of the self-proclaimed republics in eastern Ukraine held by pro-Russian separatists. ‘No communication, no water, no gas, no light, no water. There was nothing.’

Russia has made significant advances in southern Ukraine as it seeks to block access to the Sea of Azov. Capturing Mariupol could allow Moscow to establish a land corridor to Crimea, which Russia annexed from Ukraine in 2014 in a move that most other countries considered illegal.

But much of the Russian advance has become stalled, including an immense military convoy that has been almost motionless for days north of Kyiv.

A senior US defense official said Sunday that the U.S. assesses that about 95% of the Russian forces that had been arrayed around Ukraine are now inside the country. The official, who spoke on condition of anonymity to discuss military assessments, said Russian forces continue to advance in an attempt to isolate Kyiv, Kharkhiv and Chernihiv, but are being met with strong Ukrainian resistance. 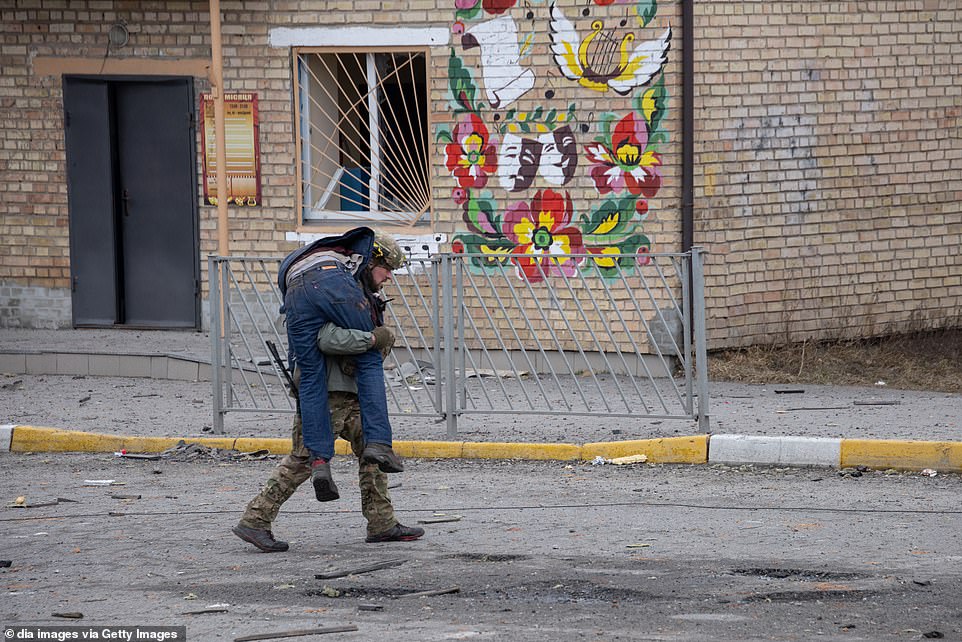 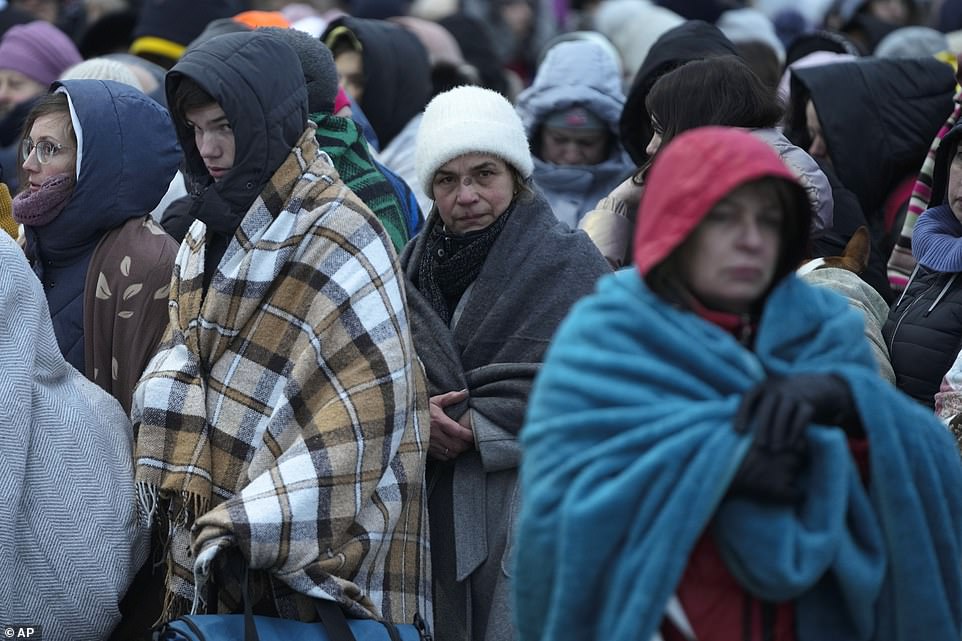 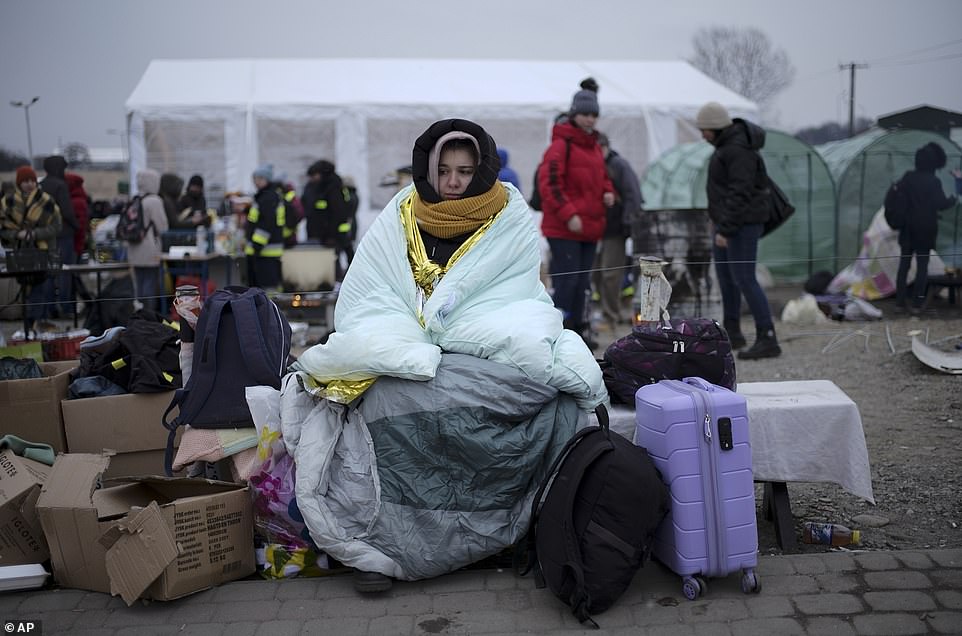 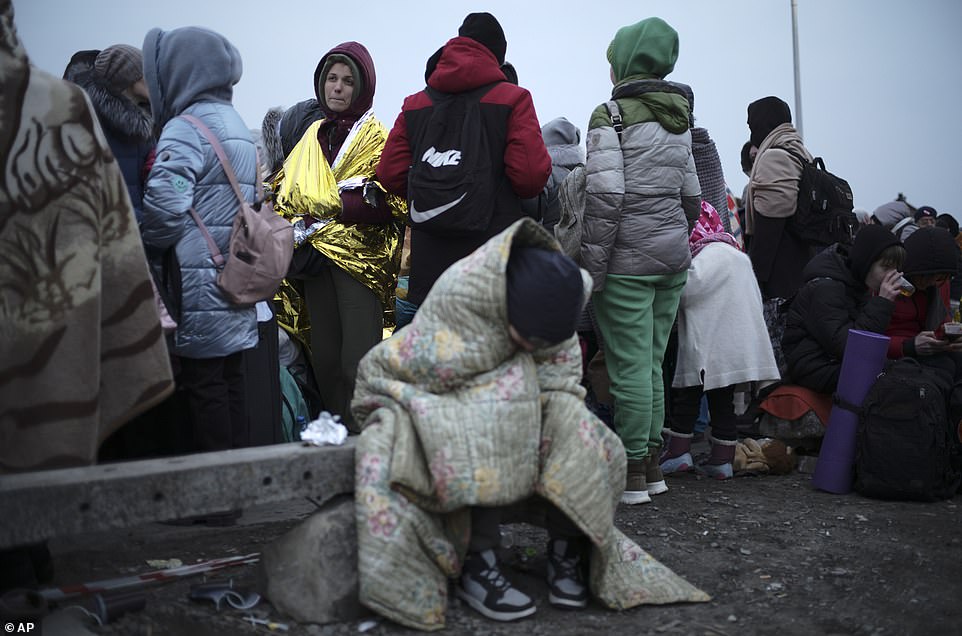 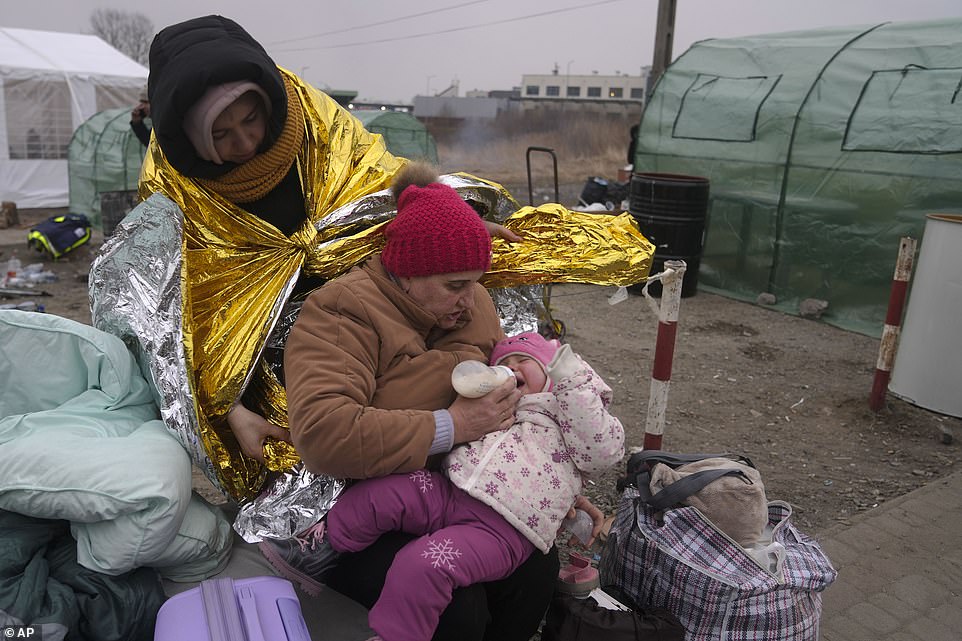 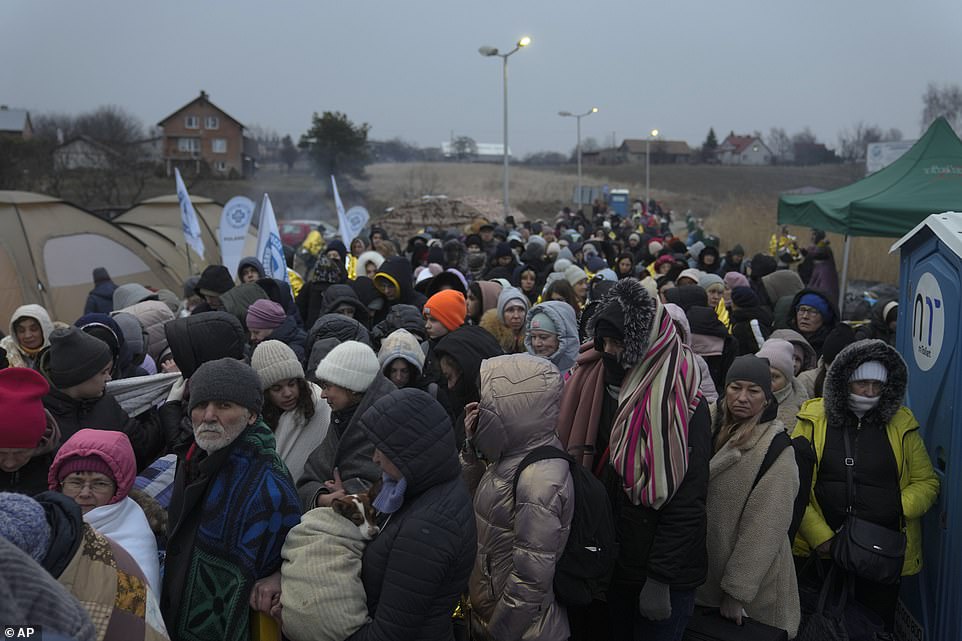 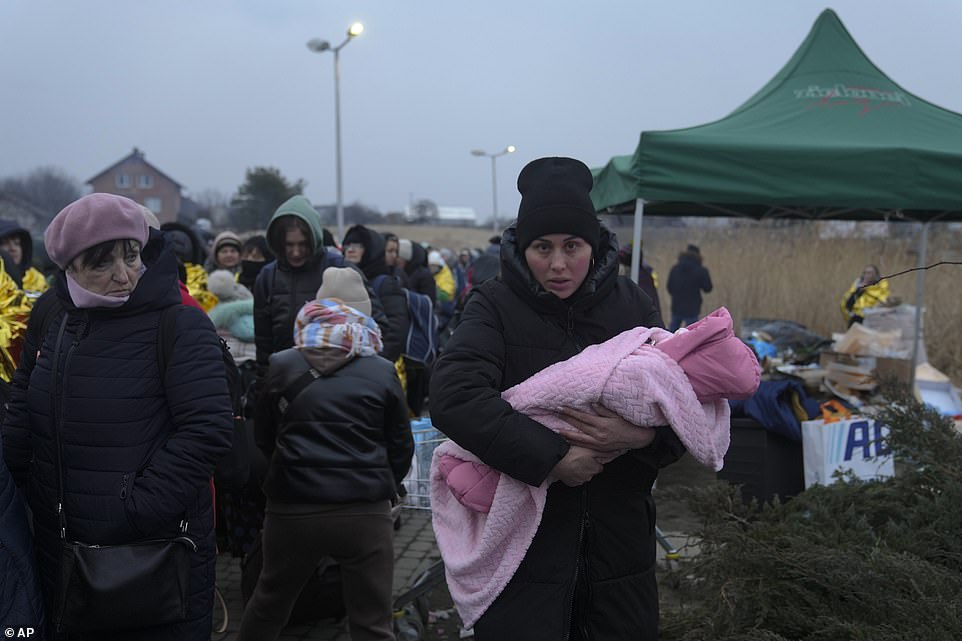 Ukraine’s professional and volunteer fighters have fought with great tenacity, though they are greatly outmatched by the Russian army. Volunteers lined up Saturday in Kyiv to join the military. Ukraine is also planning to fill an international legion with 20,000 volunteers from dozens of countries, though it was not clear how many were in Ukraine.

‘The whole world today is on Ukraine’s side, not only in words but in deeds,’ Ukrainian Foreign Minister Dmytro Kuleba said on Ukrainian television Sunday night.

The West has broadly backed Ukraine, offering aid and weapon shipments and slapping Russia with vast sanctions. But no NATO troops have been sent to Ukraine.

Zelenskyy has also heaped criticism on Western leaders for not responding with more force to Russia. He reiterated a request for foreign protectors to impose a no-fly zone over Ukraine, which NATO so far has ruled out because of concerns such an action would lead to a far wider war.

Zelenskyy also asked the United States and NATO countries to send more warplanes to Ukraine. But that idea is complicated by questions about how to provide aircraft to Ukrainian pilots.

He later urged the West to tighten its sanctions on Russia, saying that ‘the audacity of the aggressor is a clear signal’ that existing sanctions are not enough.

Russia has become increasingly isolated in the days since the invasion began, closing itself off to outside sources of information as sanctions bite deeply into its economy. The ruble has plunged in value, and dozens of multinational companies ended or dramatically scaled back their work in the country.

On Sunday, American Express announced it would suspend operations in Russia, as well as in Russian-allied Belarus. Also, two of the so-called Big Four accounting firms, KPMG and PricewaterhouseCoopers, said Sunday they would end their relationships with their Russia-based member firms.

TikTok announced Sunday that Russian users would not be able to post new videos or see videos shared from elsewhere in the world. The company blamed Moscow’s new ‘fake news’ law, which makes it illegal, among other things, to describe the fighting as an invasion. Netflix also cut its service to Russia but provided no details.

U.S. House Speaker Nancy Pelosi said Congress is exploring how to further isolate Russia from the global economy, including banning the import of its oil and energy products into the United States.