A captured Russian commander has begged for ‘mercy’ for Putin’s forces attacking Ukraine, saying they were duped into invading in the false belief that the government had been overthrown by Nazis and needing liberating.

The man, who said he is a lieutenant-colonel in the Russian national guard’s special rapid response unit, said his countrymen have been ‘brainwashed’ into supporting the war but – having seen the situation in Ukraine for himself – he now feels ‘shame’ in taking part and says Ukrainians are ‘right’ to resist.

Mikhailovich said his doubts solidified when he saw two of his favourite boxers – Oleksandr Usyk and Vasiliy Lomachenko – agreeing to fight for the resistance. And in a stark message delivered to Russian troops still fighting, he said: ‘I’m begging you, stop before it is too late… Russia cannot win here.’

It echoes statements given by other Russian prisoners interviewed by Ukrainian forces, who said the order to attack came at short notice, that they were told the Ukrainian government had been deposed, and that they were going in a ‘liberators’ who should expect only light resistance. Instead, they walked into a bloodbath.

None of their accounts can be verified, and all statements are likely to have been given under some degree of duress. But the consistency with which the same story is being told – by soldiers from different units fighting in different areas of the country who have not had time to align their stories – is striking.

It came as Russian renewed its attack on surrounded Ukrainian cities today – pounding Mariupol, Chernihiv and Kharkiv in the early hours, though without making any significant ground gains. Except for limited advances in the south, Putin’s force has now largely been at a standstill for days while taking heavy losses. 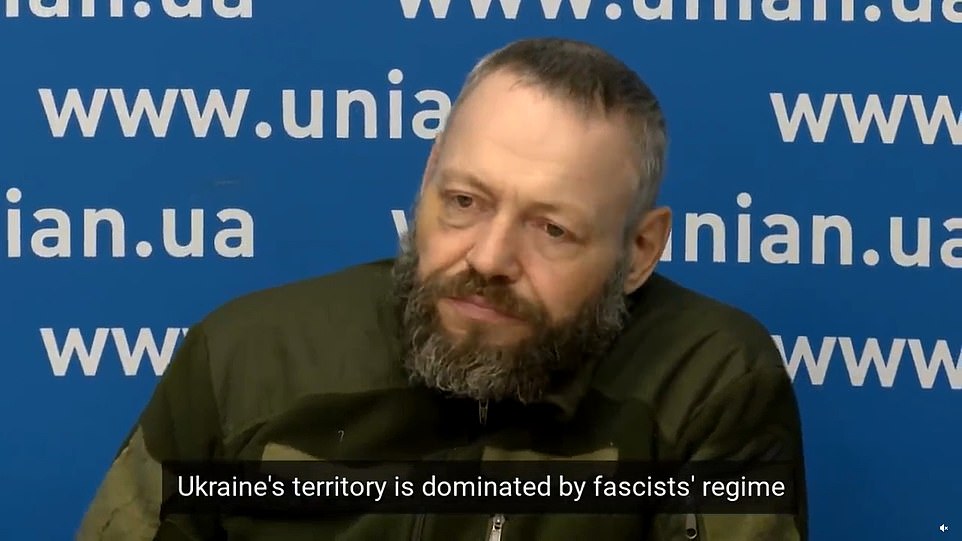 Moscow said Monday morning that it was opening ‘humanitarian corridors’ out of besieged cities such as Sumy, Kharkiv, Mariupol and Chernihiv to allow Ukrainians to flee – but was immediately condemned after maps showed the routes leading into Belarus and Russia, rather than to safe havens elsewhere in Ukraine.

Ahead of a third round of talks planned for Monday, the Russian Defence Ministry said a ceasefire would start in the morning, and safe passages would open for civilians from the capital of Kyiv, the southern port city of Mariupol, and the cities of Kharkiv and Sumy.

Some of the evacuation routes, however, would funnel civilians towards Russia or its ally Belarus – unlikely destinations for many Ukrainians who would prefer to head towards countries on the western and southern borders.

Well into the second week of war, Russia’s plan to quickly overrun the country has been stymied by fierce resistance.

Its troops have made significant advances in southern Ukraine and along the coast but many of its efforts have become stalled, including an immense military convoy that has been almost motionless for days north of Kyiv.

The fighting has sent energy prices surging worldwide, stocks plummeting, and is threatening the food supply and livelihoods of people around the world who rely on farmland in the Black Sea region.

The death toll from the fighting remains unclear. The UN says it has confirmed just a few hundred civilian deaths but also warned that the number is a vast undercount.

Police for the Kharkiv region said on Monday that 209 people have died there alone – 133 of them civilians.

The Russian invasion has also pushed 1.5 million people to flee the country, creating what the head of the UN refugee agency called “the fastest-growing refugee crisis in Europe since World War II”.

But many others have become trapped in cities under fire. Food, water, medicine and almost all other supplies were in desperately short supply in the southern port city of Mariupol, which an estimated 200,000 people are trying to flee but where an earlier ceasefire collapsed.

The Russian taskforce said the new pledge for humanitarian corridors was announced at the request of French President Emmanuel Macron, who spoke to Russian President Vladimir Putin on Sunday. Mr Macron’s office said he asked for a broader end to military operations in Ukraine and protections for civilians.

Ukrainian deputy prime minister Irina Vereshchuk called the proposed evacuation routes to Russia and Belarus “unacceptable”. Belarus is a key ally of Mr Putin and served as a launching ground for the invasion.

The Ukrainian government is proposing eight humanitarian corridors, including from Mariupol, that would allow civilians to travel to the western regions of Ukraine where there is no Russian shelling.

The Russian proposal was reminiscent of similar ones in Syria. In 2016, a joint Russian and Syrian proposal to set up humanitarian corridors out of besieged opposition-held eastern Aleppo was criticised on humanitarian grounds.

Human rights activists said the tactic, coupled by brutal sieges, effectively gave residents a choice between fleeing into the arms of their attackers or dying under bombardment.

Meanwhile Russian forces have opened fire on the city of Mykolaiv, 480 kilometres south of the capital of Kyiv, Ukraine’s General Staff said on Monday morning. Rescuers said they were putting out fires in residential areas caused by rocket attacks.

Shelling also continued in the suburbs of Kyiv, including Irpin, which has been cut off from electricity, water and heating for three days.

“Russia continues to carry out rocket, bomb and artillery strikes on the cities and settlements of Ukraine,” the General Staff said. “The invaders continue to use the airfield network of Belarus to carry out air strikes on Ukraine.”

The Russians have also been targeting humanitarian corridors, taking women and children hostage and placing weapons in residential areas of cities, according to the General Staff.

The earlier breakdown of evacuations came as Ukraine officials said that Russian shelling intensified across the country.

“Instead of humanitarian corridors, they can only make bloody ones,” Ukrainian President Volodymyr Zelenskyy said on Sunday. “Today a family was killed in Irpin. Man, woman and two children. Right on the road. As in a shooting gallery.”

Mr Putin said Moscow’s attacks could be halted “only if Kyiv ceases hostilities”.

As he has often done, Mr Putin blamed Ukraine for the war, telling Turkish President Recep Tayyip Erdogan on Sunday that Kyiv needed to stop all hostilities and fulfil “the well-known demands of Russia”.

Mr Putin launched his invasion with a string of false accusations against Kyiv, including that it is led by neo-Nazis intent on undermining Russia with the development of nuclear weapons.