A man has turned himself in to police after stabbing a child, a teenager and a woman – who was left in critical condition – in a violent spree in Philadelphia Sunday afternoon.

The unidentified victims, all of Asian descent, were attacked in the 3200 block of Knorr Street in the Mayfair neighborhood at around 2.08pm, police say.

They were transported to the Frankford-Torresdale Hospital. The two children are listed in stable condition, police say, while the woman remains in critical.

A man turned himself in at the 15th district station later in the day. He was taken to the hospital to be identified and is now in police custody. No charges were immediately announced.

Violent crime in Philadelphia is up 3.7 percent from this time last year, according to the latest numbers from the city’s police department. Crime continues to rise after the city saw a more than 560 homicides last year, breaking the record of 503 in 1990.

Anti-Asian hate crimes in the US went up by 77 percent from 2019 to 2020. The COVID-19 pandemic, which originated in China, has been blamed for the trend. 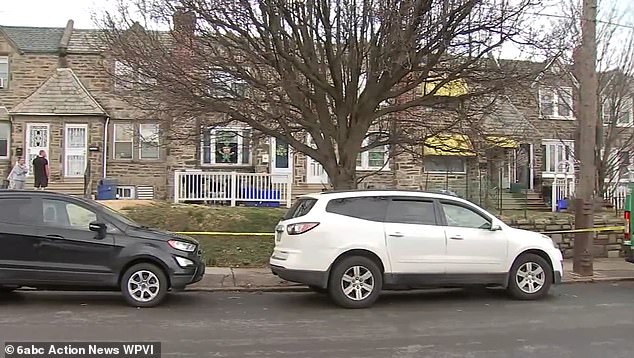 Three victims – a 37-year-old woman, a 10-year-old boy and a 15-year-old teenager, were stabbed in the Mayfair neighborhood of Philadelphia on Sunday 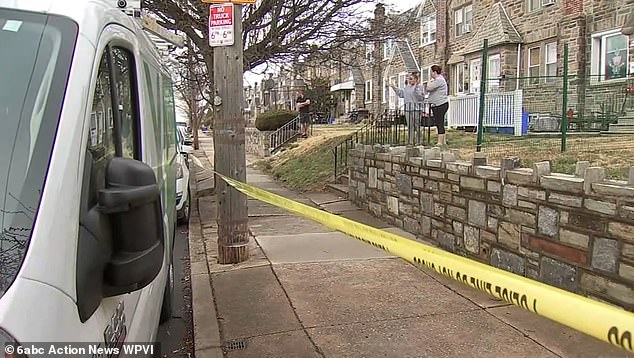 The woman remains in critical condition, police say. The boys are in stable condition. Their identifies and their relationship to each other have not been revealed 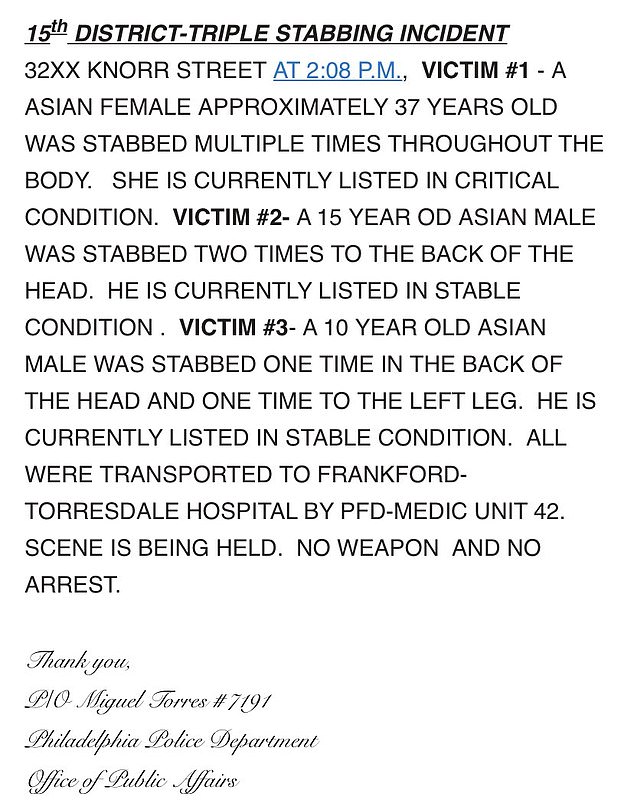 Police first announced that the suspect remained at large, though he turned himself in at a police station later in the day and was detained. Charges have not been announced

Police haven’t revealed the identities of the victims of Sunday’s attack nor their relationship to each other.

Video captured by WPVI shows the scene of the grisly stabbings, which is located in a street lined with rowhouses, cordoned off with police tape as cruisers stand by.

It happened in Mayfair, a neighborhood in northeast Philadelphia that is 10 percent Asian, according to Niche.

Last year, a 17-year-old Chinese-American student was randomly punched by two teens in the neighborhood, according to the Philadelphia Inquirer.

A female friend of the attackers laughed, according to the victim and his grandmother.

No racist words were spoken in the attack, and police did not investigate it as a hate crime, the Inquirer reported at the time.

All violent crime in Philadelphia is up by 3.7 percent compared to last year. Property crimes – including burglary, retail theft and auto theft – are up by 5.43 percent.

Overall ‘Part 1’ offenses, which include mix violent crimes with property crimes like burglary and motor vehicle theft, are up by 5.06 percent

The city is home to 1.6 million people, making it the largest in Pennsylvania.

‘Philadelphia’s 2021 murder rate easily surpassed our all-time record of 503 people murdered in 1990 and has passed the 499 homicides that happened in 2020,’ city councilman Kenyatta Johnson said in a statement in January. 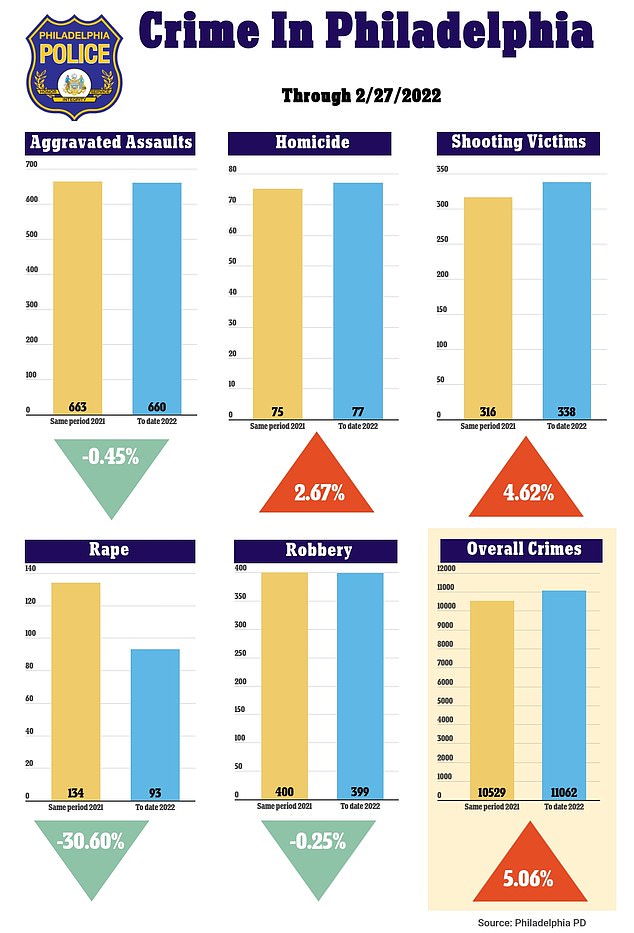 Violent crime in Philadelphia is up by 3.7 percent from this time last year. Overall Part 1 offenses, which include burglary and motor vehicle theft, are up 5.06 percent 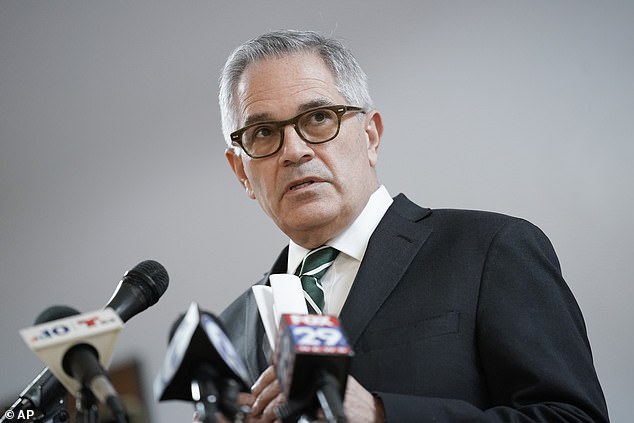 Philadelphia District Attorney Larry Krasner faced criticism in December for saying the city doesn’t have a crisis of lawlessness or crime. Above, Krasner on January 31 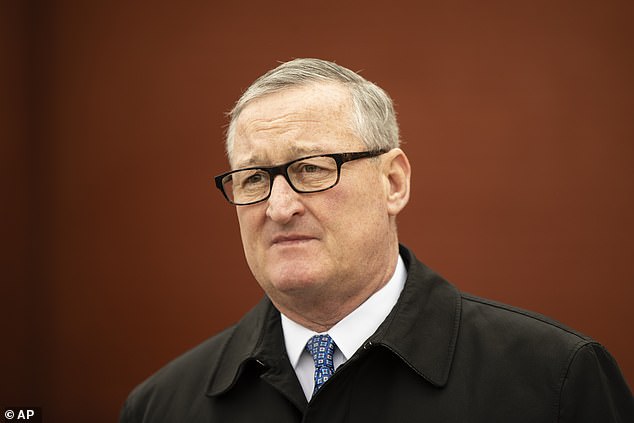 Philadelphia Mayor Jim Kenney pushed back on Krasner’s remarks a few days later, saying he agrees ‘we’re in a gun crisis.’ Above, Kenney in March 2020

‘This is not a record any city leader or Philadelphia resident should be proud of. Reducing gun violence in Philadelphia should be the number one priority for all city leaders in 2022. There are at least 560 families who have lost a loved one in 2021 and that is totally unacceptable!’

In December, Philadelphia District Attorney Larry Krasner came under fire after claiming there isn’t a crime issue in the city.

Former Mayor Michael Nutter called Krasner’s remarks ‘some of the worst, most ignorant, and most insulting comments I have ever heard spoken by an elected official.’

Democratic Mayor Jim Kenney pushed back on Krasner’s words a few days later, saying he agrees ‘we’re in a gun crisis,’ according to the Inquirer.

Last month, prosecutors said that a man who was arrested for dismembering his girlfriend’s body with a machete killed her because she was a ‘threat to his masculinity.’

Nicholas Scurria, 32, was taken into custody by police in the early morning of Friday, February 11 in Clifton Heights, Pennsylvania, five miles west of Philadelphia. 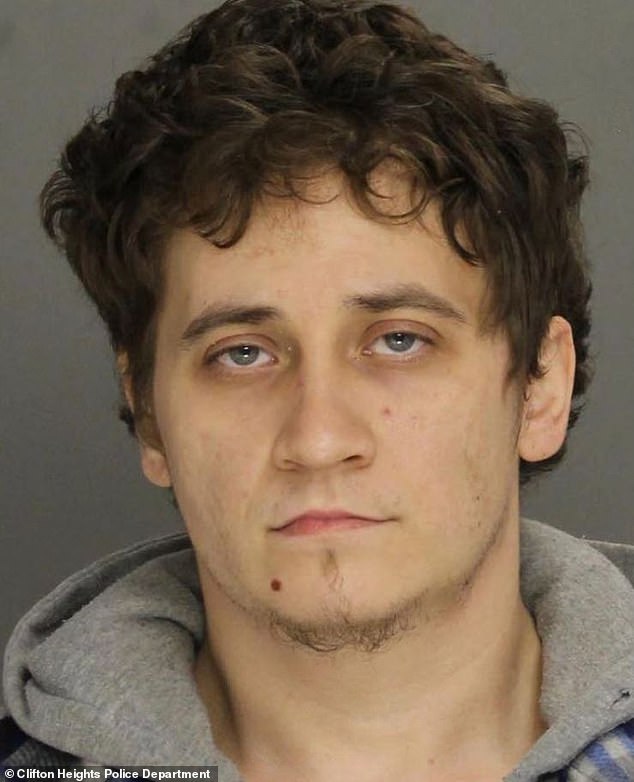 Nicholas Scurria, 32, allegedly killed his girlfriend by beheading her with a machete before attempting to dismember the rest of her body because she was a ‘threat to his masculinity,’ prosecutors said 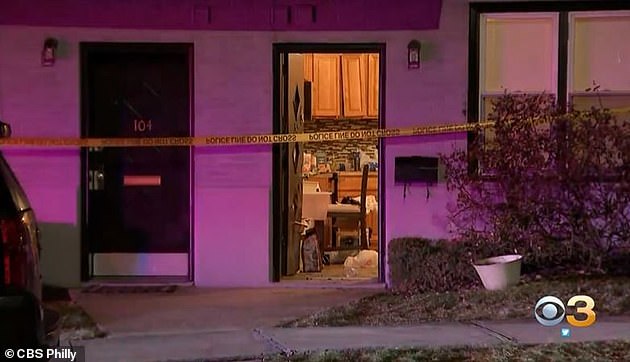 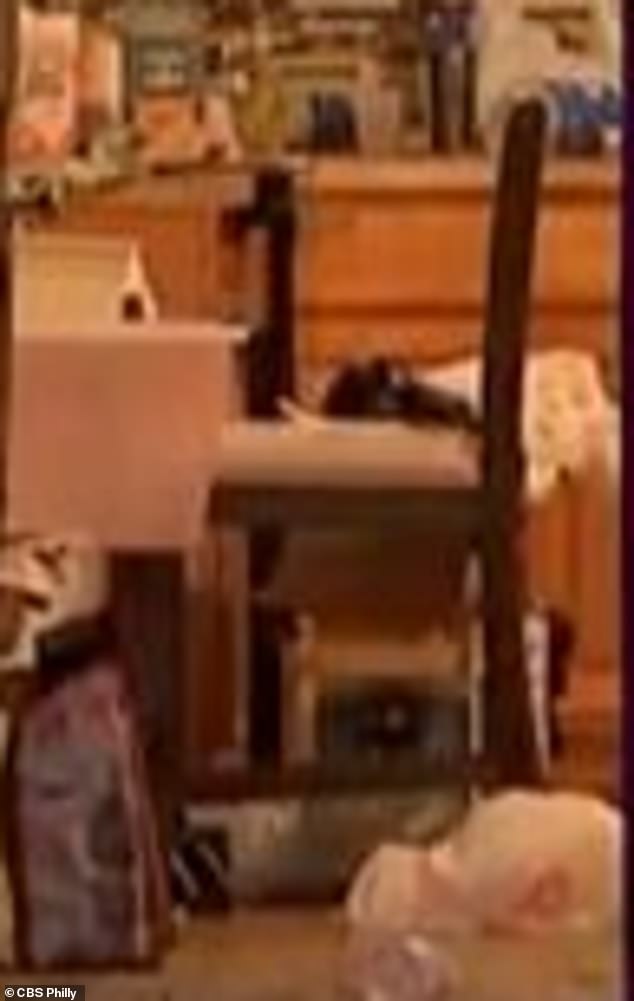 Police said that Scurria killed his unidentified girlfriend ‘in response to what the defendant perceived as a threat to his masculinity.’

‘His actions were cowardly as well as evil, and he will be prosecuted to the full extent of the law,’ said Delaware County District Attorney Jack Stollsteimer at the time.

‘This morning’s horrific murder is a sad reminder of the threat that many women face on a daily basis.’

Police rushed to the scene after being called in the middle of the night by Scurria’s next-door neighbor at 4.40am after heading screaming and loud bangs coming through the walls.

A police report details how after a huge amount of noise between the couple, the place suddenly ‘became quiet’ before ‘sawing-like sounds’ and ‘the gathering or shifting of plastic material’ could then be heard. 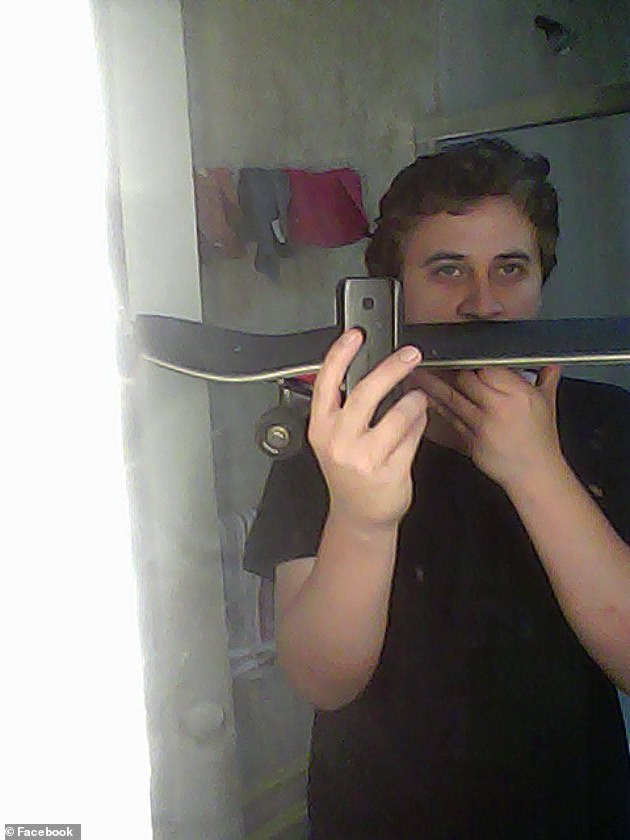 When police showed up they found Scurria sitting on a mattress sawing the left leg of his girlfriend’s corpse. He is pictured here in a photo from Facebook with a skateboard

The police affidavit shows a neighbor ‘woke up to loud screaming in the neighboring apartment.’

Police arrived on the scene to find Scurria allegedly using a machete to saw off the left leg of his girlfriend’s body, who had already been decapitated.

‘Furthermore, the female victim was decapitated while lying on her back on the floor,’ the affidavit stated.

Scurria was found sitting on a mattress as he carried out the bloody act as officers burst in with their weapons drawn.

A roll of plastic wrap was found next to her body.

‘Police witnessed the suspect attempting to decapitate the already-deceased victim using a machete,’ the report states.