By Christina Coulter For Dailymail.Com


Donald Trump, portrayed by James Austin Johnson, manned the phones for a ‘FOX News Ukrainian Invasion Special’ charity drive in support of Russia’s invasion of Ukraine on tonight’s Saturday Night Live, serenading the dictator and saying ‘I love you, Vlad.’

Laura Ingraham, played by Kate McKinnon, and Tucker Carlson, played by Beck Bennett, hosted the charity drive for the ‘babies’ – ‘the sugar babies of Russian oligarchs.’

The two television personalities, they said, ‘got in trouble’ for the ‘nice things we said about Russia and the mean things we said about Ukraine,’ with McKinnon saying that Ingraham ‘called the president of Ukraine pathetic [when] he stayed and fought with his people in a war, and I called him pathetic from a news desk in Washington.’

‘We did sound really awful in hindsight and foresight,’ McKinnon’s Ingraham said. 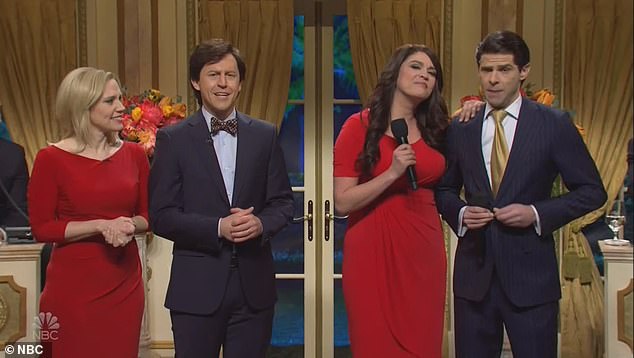 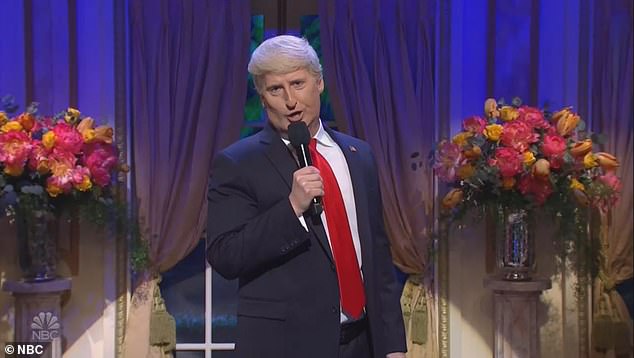 Trump serenaded Russian President Vladimir Putin with a version of ‘My Funny Valentine,’ closing out by saying ‘I love you, Vlad’

Bennett as Carlson, meanwhile, said that he ‘kept saying we should be more worried about our own border getting invaded by Mexico.’

‘In my defense, I’m racist and I thought that was true,’ Bennett’s character said.

‘But tonight, we’re going to make it up to you,’ McKinnon’s Ingraham said. ‘We’re going to raise money for the real victims of this invasion – the oligarchs.’

Those who donated had the option could ‘either send money or take out a reverse mortgage.’

Thus far, $8.3 million roubles – ‘which comes out to almost twelve dollars’ – had been raised.

Trump, meanwhile, manned the phones for the charity drive – those who donated would get a My Pillow,  a six month subscription to Life Lock and ten American Flag catheters.

Trump serenaded Russian President Vladimir Putin with a version of ‘My Funny Valentine,’  closing out by saying ‘I love you, Vlad.’