George Floyd had ‘high tolerance’ to fentanyl: Forensic chemist backs claim drugs could not have killed him and tells jury it had already metabolized – something not seen in overdose victims

A forensic toxicologist has told the jury in Derek Chauvin’s murder trial that George Floyd had a high tolerance to fentanyl and it had already started metabolizing when he died, which suggests his death wasn’t an overdose.

Daniel Isenschmid testified on Thursday that he tested blood drawn from Floyd at the hospital and urine from his autopsy.

Isenschmid said fentanyl and norfentanyl, which is a byproduct of its breakdown, were both found in his body, as well as a ‘very low’ amount of methamphetamine.

He told the court that even though there was a high level of fentanyl in Floyd’s bloodstream – 11ng ml where a 3ng ml could be lethal – individual tolerance had to be taken into account. 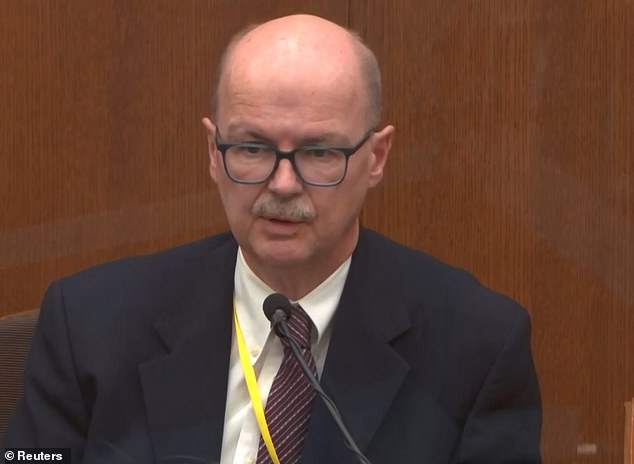 The toxicology expert suggested Floyd’s tolerance have been high as a regular user.

He also pointed to the presence of norfentanyl – a metabolic of fentanyl.

Isenschmid said that he wouldn’t expect to see this in a case where death had occurred as a result of fentanyl overdose because the body wouldn’t have had a chance to metabolize the drug.

He described the level of meth in Floyd’s bloodstream – 19ng ml – as no more than he would expect to find in the blood of a patient who had consumed a single legally prescribed dose and his amphetamine was below reportable levels.

Putting Floyd’s blood toxicology into context, Isenschmid told the court that of 2345 DUI blood samples analyzed by his lab, 376 – all of whom survived – had levels of fentanyl upwards of 16ng ml in their blood stream with the highest coming in at a staggering 50ng ml.

In contrast, Floyd’s blood fentanyl level was below the average and the median in the DUI cases they had analyzed.

Similarly, Floyd’s levels of meth put him in the bottom 15.2 percent of 3271 DUI blood samples analyzed by the lab, with 215 drivers recording levels of methamphetamine greater than 1000ng ml. 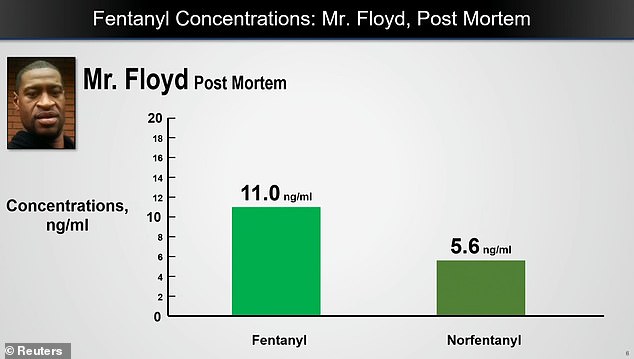 Isenschmid said fentanyl and norfentanyl, which is a byproduct of its breakdown, were both found in his body. He told the court that even though there was a high level of fentanyl in Floyd’s bloodstream – 11ng ml – individual tolerance had to be taken into account 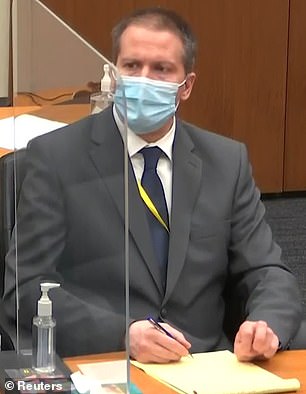 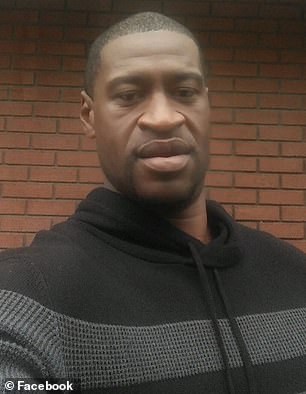 Chauvin, 45, is accused of killing Floyd by pinning his knee on the 46-year-old black man’s neck for 9 minutes, 29 seconds, as he lay face-down in handcuffs after being detained for using an alleged counterfeit $20 bill to buy cigarettes

According to Dr Tobin, Floyd’s breathing rate and the high levels of carbon dioxide found in his arterial blood post mortem both spoke to fentanyl having no part in his death.

Fentanyl, he explained, depresses respiratory rate, while heart disease another factor pointed to as an alternative to asphyxia, increases it.