Joe Biden’s top coronavirus adviser Jeff Zients has up to $5 million in gold bars and earned $330,000 sitting on the board of Facebook

President Joe Biden’s top coronavirus adviser Jeff Zients is, so far, the richest member of his senior staff, according to the financial disclosure forms that have been made available.

News outlets, including the Wall Street Journal, obtained Zients’ documents and found that he’s worth at least $89.3 million and as much as and $442.8 million, and owns between $1 million to $5 million in gold bars and made more than $330,000 as a board member of Facebook.

Also among those worth at least in the tens of millions are science adviser Eric Lander – valued at a minimum of $45.5 million – and Susan Rice, the director of the Domestic Policy Council. 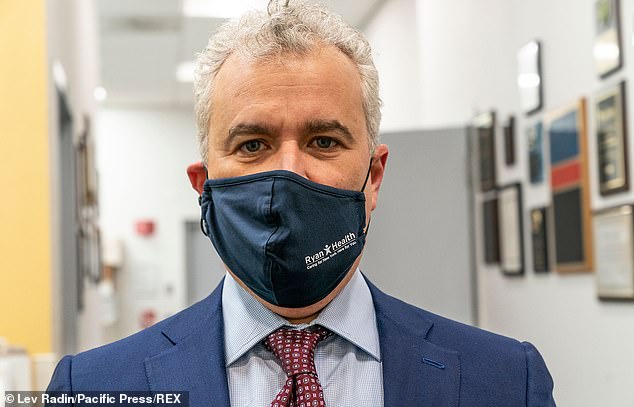 President Joe Biden’s COVID-19 adviser Jeff Zients is worth between $89.3 million and $442.8 million, and owns between $1 million and $5 million in gold bars. Of the top members of the administration who have disclosed their finances, he comes in the richest

Zients worked in corporate consulting before moving to the government.

Zients was paid $1.7 million last year at Cranemere Group, where he served as president and CEO.

He owns millions in commercial real estate and has tens of millions of dollars in investments.

He divested shares in his private investment firm, Cranemere Group, along with $1 million in shares of Facebook stock, ABC News reported.

He also divested from a popular D.C. bagel shop as he joined the administration.

Rice, who served as President Barack Obama’s ambassador to the United Nations and national security adviser, is worth at least $37.9 million.

She had been the richest member of the executive branch when joining the Obama administration in 2009 – even beating out then-Secretary of State Hillary Clinton.

But now she’s reporting about four times the amount she did then.

ABC News reported that Rice owns between $250,000 and $5 million in stocks including Apple, Microsoft and Johnson & Johnson.

Having served as a board member for Netflix, Rice also had significant stock holdings from the streaming company, earning $300,000 in the past year, financial disclosures show.

She also has between $1 million and $5 million of holdings in the Canadian natural gas distribution company Enbridge. Rice’s husband is Canadian.

ABC also reported that Rice earned $620,000 from speaking engagements and $250,000 in book royalties, bringing her annual earnings to between $2 million and $6.7 million.

Biden’s climate envoy, former senator and Secretary of State John Kerry, has not yet released his financial disclosure forms, but is also expected to be among the richest members of the administration.

Kerry married Teresa Heinz Kerry in 1995 and she’s the heiress to the Heinz ketchup fortune through her late husband, John Heinz, who also served in the U.S. Senate.

While a handful of members of the Biden team are among the ultra-rich, their wealth isn’t close to the top-tier of the Trump administration, in which Education Secretary Betsy DeVos, Commerce Secretary Wilbur Ross, National Economic Council directory Gary Cohn, Secretary of State Rex Tillerson, advisers Jared Kushner and Ivanka Trump and Treasury Secretar Steve Mnuchin all disclosed more than Zients, at a minimum.