BREAKING NEWS: Overseas fans are BARRED from the Olympics: Tokyo 2020 bosses confirm they won’t let spectators travel to Japan as ticket-holders are handed refunds over fears of spreading new variants

By David Coverdale For The Mail On Sunday

Team GB athletes will be without the support of their own fans and families at this summer’s Olympics after overseas spectators were barred from attending the Tokyo Games.

The much-expected decision to ban foreign supporters was finally made by organisers on Saturday because it was ‘highly unlikely’ entry to Japan could be guaranteed for visitors amid the ‘very challenging’ current Covid-19 situation.

International Olympic Committee president Thomas Bach said he was ‘truly sorry’ but that the ‘first principle is safety’. 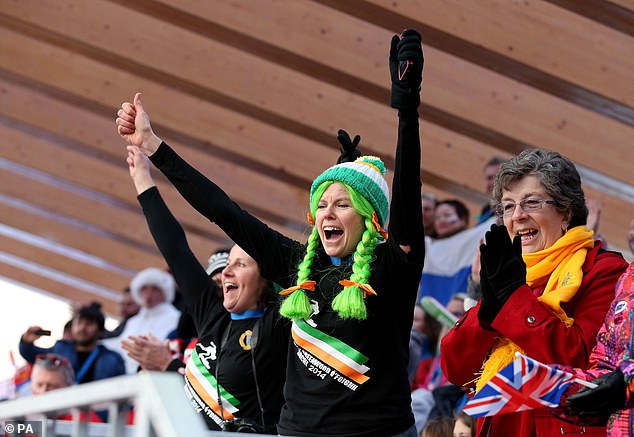 Olympic and Paralympic tickets purchased by overseas residents will be refunded

Around one million tickets were understood to have been sold to spectators from outside Japan, with about 3000 expected to travel from Britain.

They will now be offered refunds in what is a major financial hit to the organising committee, who expected income of £577million from overall ticket sales.

Organisers remain confident domestic spectators will be able to attend the Olympics and Paralympics, but a decision on how many will be allowed into each venue will not be taken until next month.

Japan’s coronavirus vaccination programme has been hampered by a lack of supply and a shortage of specialty syringes needed to inject the population.

As of March 5, just under 46,500 doses had been administered to frontline medical workers as of last Friday.

At the current rate, it would take 126 years to vaccinate Japan’s population of 126 million. Supplies are, however, expected to increase in the coming months.

Unlike many other countries, Japan requires clinical trials for new medicines, including vaccines, to be conducted with Japanese patients, slowing down the approval process.

So far, only the vaccine developed by Pfizer and BioNTech has been approved. Clinical trials in Japan for AstraZeneca and Moderna’s vaccines have been conducted and the vaccines are now awaiting regulatory approval.

According to The Japan Times, inoculation for senior residents with vaccination tickets is expected to begin from April 12.

The country is set to receive 100 million doses of the Pfizer vaccine between May and June, while the Moderna vaccine is also expected to be approved in this time.

A Tokyo 2020 statement said: ‘Currently, the Covid-19 situation in Japan and many other countries around the world is still very challenging and a number of variant strains have emerged, whilst international travel remains severely restricted globally.

‘Based on the present situation of the pandemic, it is highly unlikely that entry into Japan will be guaranteed this summer for people from overseas.

‘In order to give clarity to ticket holders living overseas and to enable them to adjust their travel plans at this stage, the parties on the Japanese side have come to the conclusion that they will not be able to enter into Japan at the time of the Olympic and Paralympic Games.

‘This conclusion will further contribute to ensure safe and secure Games for all participants and the Japanese public.’

International Olympic Committee president Bach added: ‘We share the disappointment of all enthusiastic Olympic fans from around the world, and of course the families and friends of the athletes, who were planning to come to the Games.

‘For this I am truly sorry. We know that this is a great sacrifice for everybody. We have said from the very beginning of this pandemic that it will require sacrifices.

‘But we have also said that the first principle is safety. Every decision has to respect the principle of safety first. I know that our Japanese partners and friends did not reach this conclusion lightly.’

A British Olympic Association spokesperson said: ‘This is very sad news, not only for British fans but particularly for the family and friends of athletes. Whilst it is a very disappointing situation, it does underline the organisers’ determination to stage a safe and secure Olympic Games.

‘We are now awaiting detailed clarification from the Tokyo 2020 organising committee on several points, including the detail of the restrictions, process and timing of refunds for international ticket holders and will stay in touch with fans to keep them updated. We will communicate promptly and clearly as and when any information becomes available.’