Thousands of Ukrainians protested against Russian troops in occupied Kherson and demonstrated incredible bravery and defiance in the face of an invading army.

Residents poured out into the main square of the Black Sea port on Saturday to wave blue and yellow flags and chant at Vladimir Putin’s forces, as Russian combatants reportedly responded by firing automatic weapons into the air to disperse the crowd, before leaving the city centre themselves.

In Kherson, the only major city to have fallen to Russian forces so far, 2,000 people took to the streets as demonstrators chanted ‘Glory to Ukraine’ and ‘Death to the enemy’. One protester was seen climbing on top of a Russian armoured vehicle while holding the blue and yellow flag of Ukraine, The Mirror reported.

There had earlier been signs of defiance from the population of Melitopol, which was taken over by the Russians this week. Locals shouted ‘Go home!’ and ‘Melitopol us Ukraine’, and demonstrators have been saying ‘out with the orcs’ at Russians – comparing them to the malevolent invaders of JRR Tolein’s The Lord of the Rings.

The show of defiance came after Russian President Vladimir Putin warned Saturday that Ukrainian statehood is in jeopardy and likened the West’s sanctions on Russia to ‘declaring war,’ while a promised cease-fire in the besieged port city of Mariupol collapsed amid scenes of terror.

With the Kremlin’s rhetoric growing fiercer and a reprieve from fighting dissolving, Russian troops continued to shell encircled cities and the number of Ukrainians forced from their country grew to 1.4 million.

By Saturday night Russian forces had intensified their shelling of Mariupol, while dropping powerful bombs on residential areas of Chernihiv, a city north of Kyiv, Ukrainian officials said.

Bereft mothers mourned slain children, wounded soldiers were fitted with tourniquets and doctors worked by the light of their cellphones as bleakness and desperation pervaded. Putin continued to pin the blame for all of it squarely on the Ukrainian leadership and slammed their resistance to the invasion.

‘If they continue to do what they are doing, they are calling into question the future of Ukrainian statehood,’ he said. ‘And if this happens, it will be entirely on their conscience.’

‘These sanctions that are being imposed, they are akin to declaring war,’ he said during a televised meeting with flight attendants from Russian airline Aeroflot. ‘But thank God, we haven’t got there yet.’

Russia’s financial system suffered yet another blow as Mastercard and Visa announced they were suspending operations in the country. 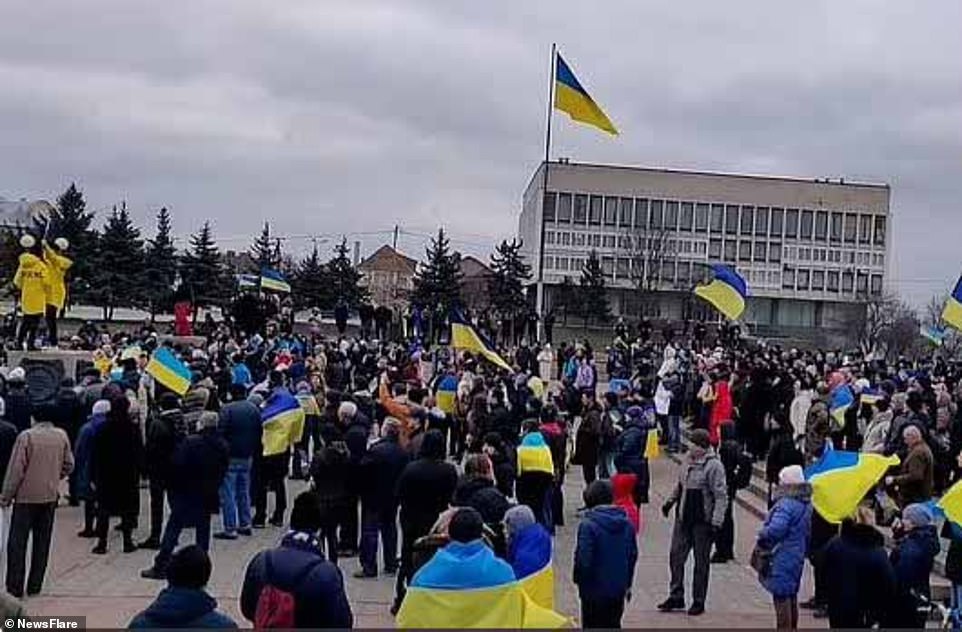 In Kherson, the only major city to have fallen to Russian forces so far, 2,000 people took to the streets as demonstrators chanted ‘Glory to Ukraine’ and ‘Death to the enemy’. One protester was seen climbing on top of a Russian armoured vehicle while holding the blue and yellow flag of Ukraine 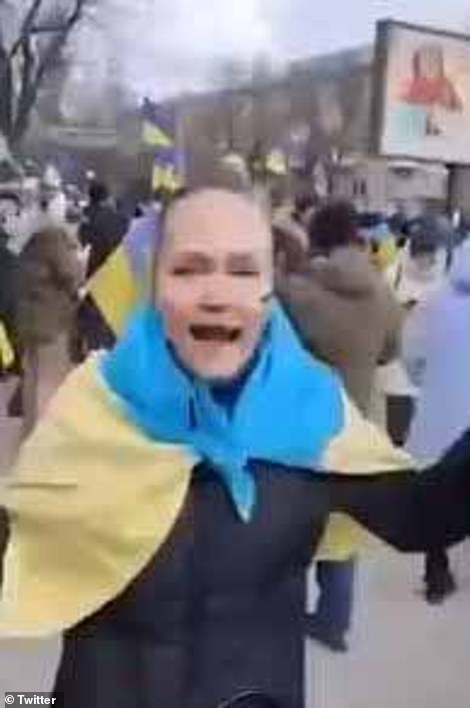 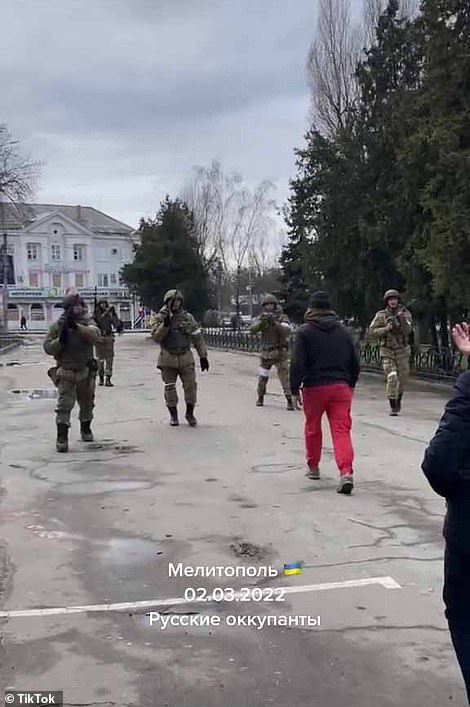 Thousands of Ukrainians protested against Russian troops in occupied Kherson (left) and demonstrated incredible bravery and defiance in the face of an invading army. There had earlier been signs of defiance from the population of Melitopol (right), which was taken over by the Russians this week. Locals shouted ‘Melitopol us Ukraine’, and demonstrators have been shouting ‘out with the orcs’ at Russians – comparing them to the malevolent invaders of JRR Tolein’s The Lord of the Rings 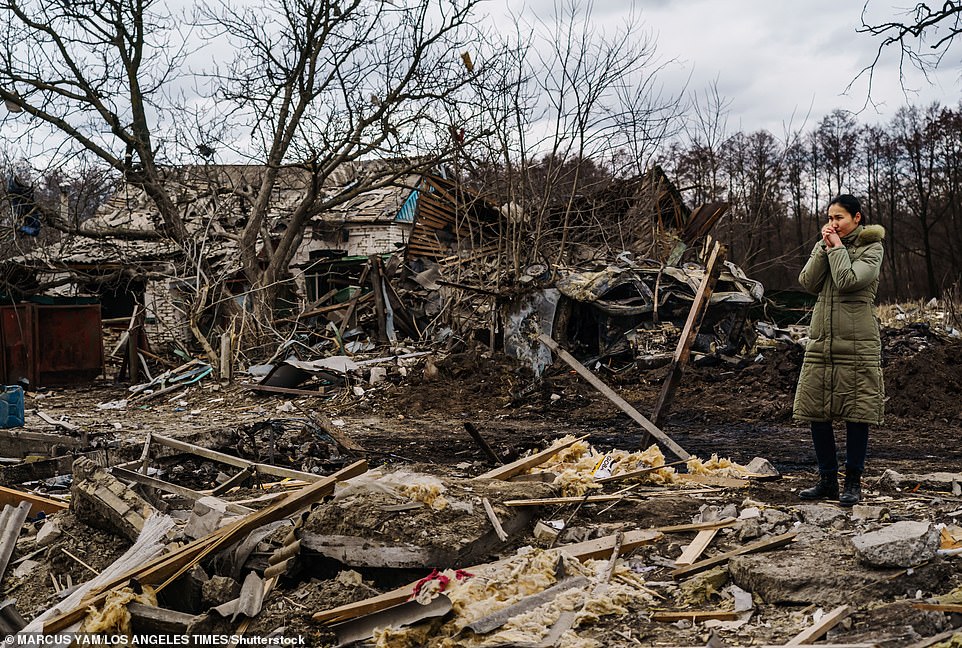 Gulayim Tolibaeva, 30, sobs as she watches local residents help clear the rubble of a home that was destroyed by a suspected Russian airstrike which killed at least six people in Markhalivka, Ukraine, Saturday, March 5 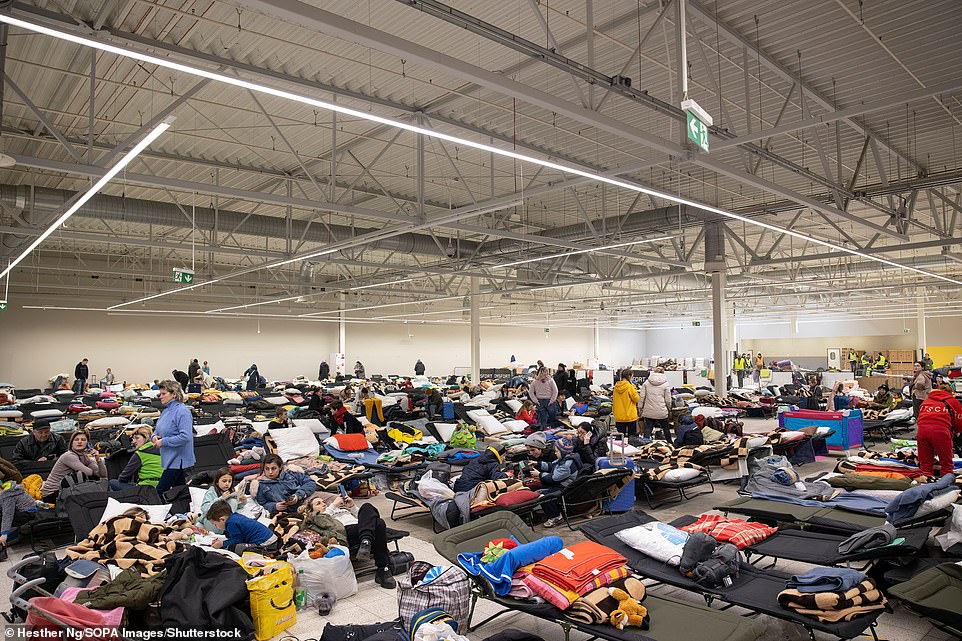 A temporary reception area has set up at a warehouse at the city skirt of Przemysl, Poland, in order to cope with hundreds of thousands of Ukrainian refugees fleeing through the Medyka-Shehyni border 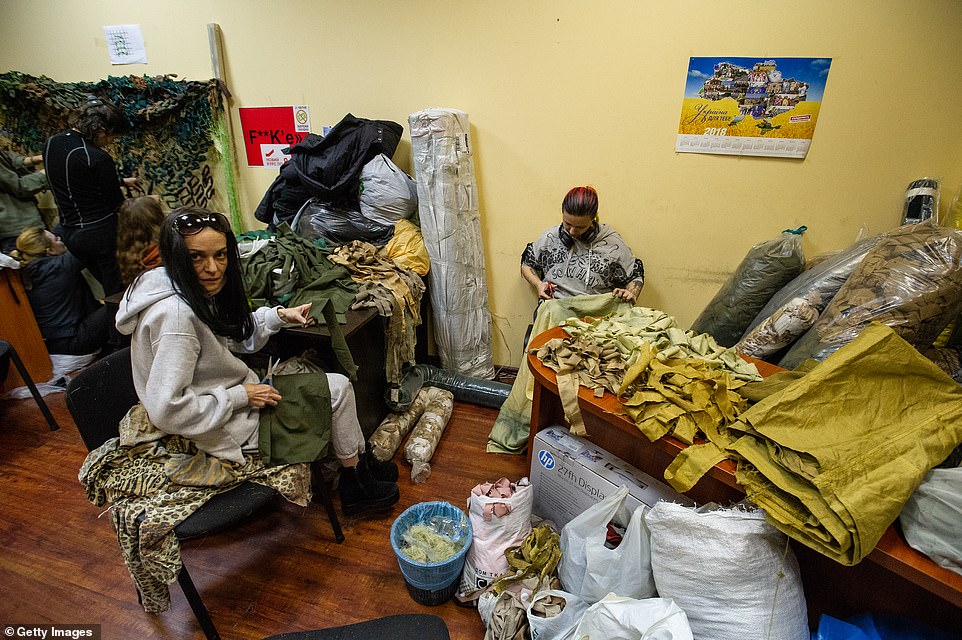 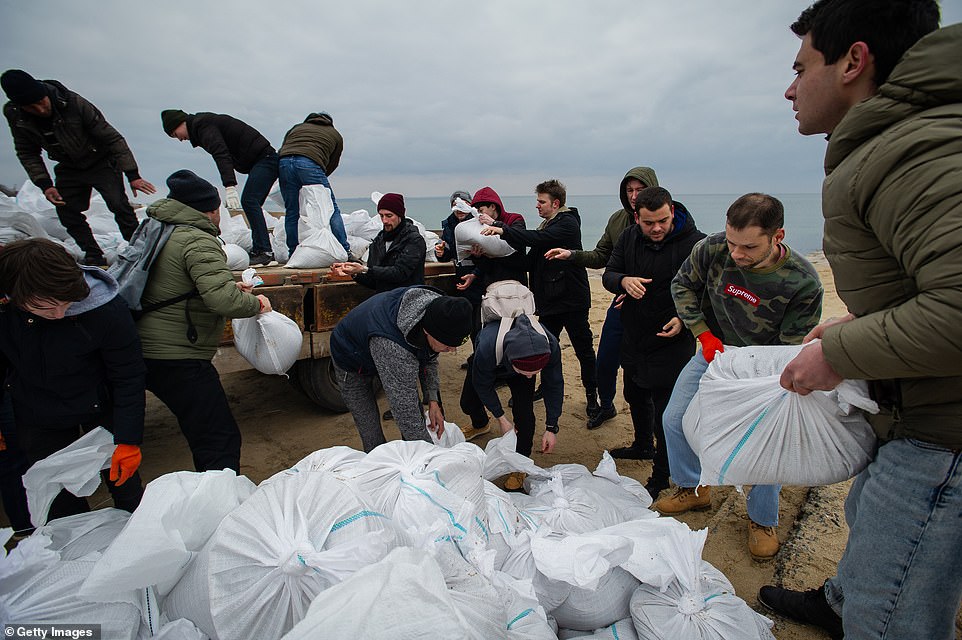 ODESSA: Ukrainian civilians fill sandbags with Black Sea sand, along a tourist beach, for use in defensive positions in the city before an expected Russian assault in Odessa, Ukraine, on March 5 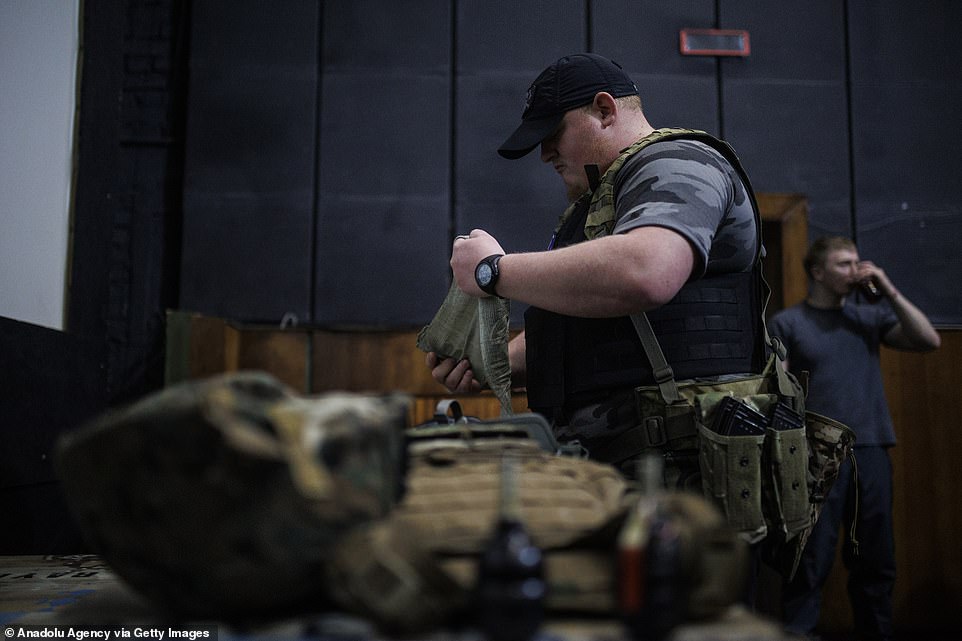 LVIV: Civilians learn to use AK47 rifles in a cinema at the Lviv Film Center on 5 March 2022 in Lviv, Ukraine 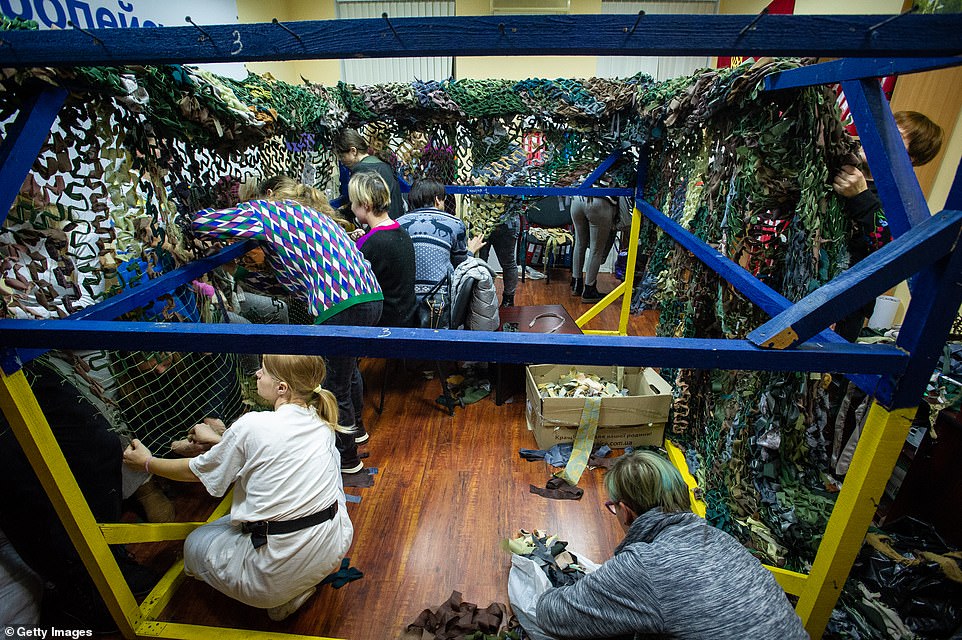 Ten days after Russian forces invaded, the struggle to enforce the temporary cease-fires in Mariupol and the eastern city of Volnovakha showed the fragility of efforts to stop the fighting across Ukraine.

Ukrainian officials said Russian artillery fire and airstrikes had prevented residents from leaving before the agreed-to evacuations got underway. Putin accused Ukraine of sabotaging the effort.

A third round of talks between Russia and Ukraine will take place Monday, according to Davyd Arakhamia, a member of the Ukrainian delegation. He gave no additional details, including where they would take place.

Previous meetings were held in Belarus and led to the failed cease-fire agreement to create humanitarian corridors for the evacuation of children, women and older people from besieged cities, where pharmacies have run bare, hundreds of thousands face food and water shortages, and the injured have been succumbing to their wounds.

In comments carried on Ukrainian television, Mariupol Mayor Vadym Boychenko said thousands of residents had gathered for safe passage out of the city of 430,000 when shelling began and the evacuation was stopped. Later in the day, he said the attack had escalated further. 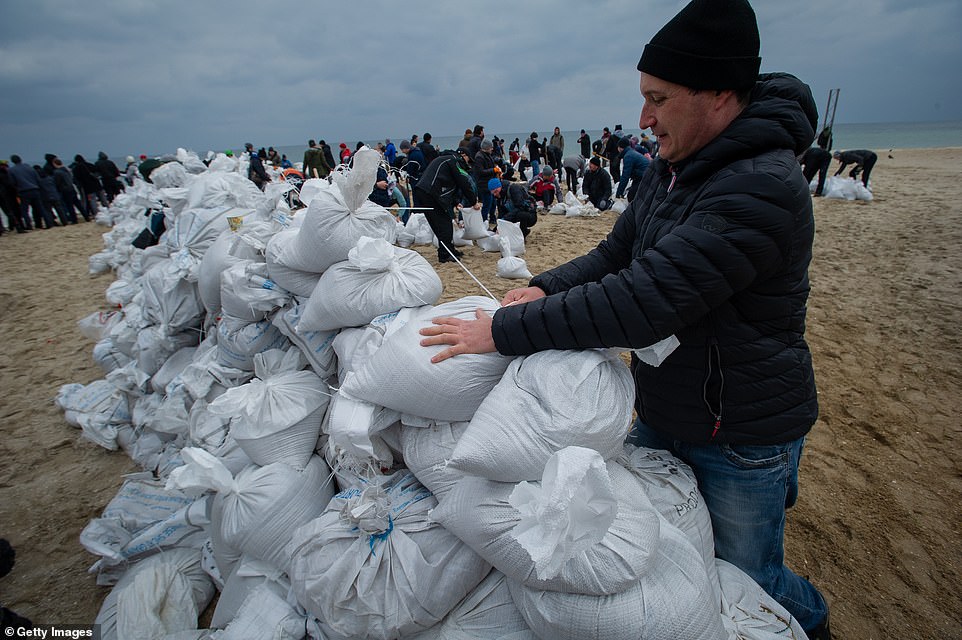 ODESSA: Ukrainian civilians fill sandbags with Black Sea sand at the Odessa Yacht Club, for use in defensive positions in the city before an expected Russian assault in Odessa, Ukraine, on March 5

‘The city is in a very, very difficult state of siege,’ Boychenko told Ukrainian TV. ‘Relentless shelling of residential blocks is ongoing, airplanes have been dropping bombs on residential areas. The Russian occupants are using heavy artillery, including Grad multiple rocket launchers.’

Russia has made significant advances in the south, seeking to cut off Ukraine’s access to the sea. Capturing Mariupol could allow Russia to establish a land corridor to Crimea, which it annexed in 2014.

Meanwhile the head of the Chernihiv region said Russia has dropped powerful bombs on residential areas of the city of the same name, which has a population of 290,000. Vyacheslav Chaus posted a photo online of what he said was an undetonated FAB-500, a 1,100-pound (500-kilogram) bomb.

‘Usually this weapon is used against military-industrial facilities and fortified structures,’ Chaus said. ‘But in Chernihiv, against residential areas.’

In a speech to Ukrainians on Saturday, President Volodymyr Zelenskyy pointed to ‘the 500-kilogram bombs that were dropped on the houses of Ukrainians. Look at Borodyanka, at the destroyed schools, at the blown-up kindergartens. At the damaged Kharkiv Assumption Cathedral. Look what Russia has done.’

The West has broadly backed Ukraine, offering aid and weapons and slapping Russia with vast sanctions. But the fight itself has been left to Ukrainians, who have expressed a mixture of courageous resolve and despondency. 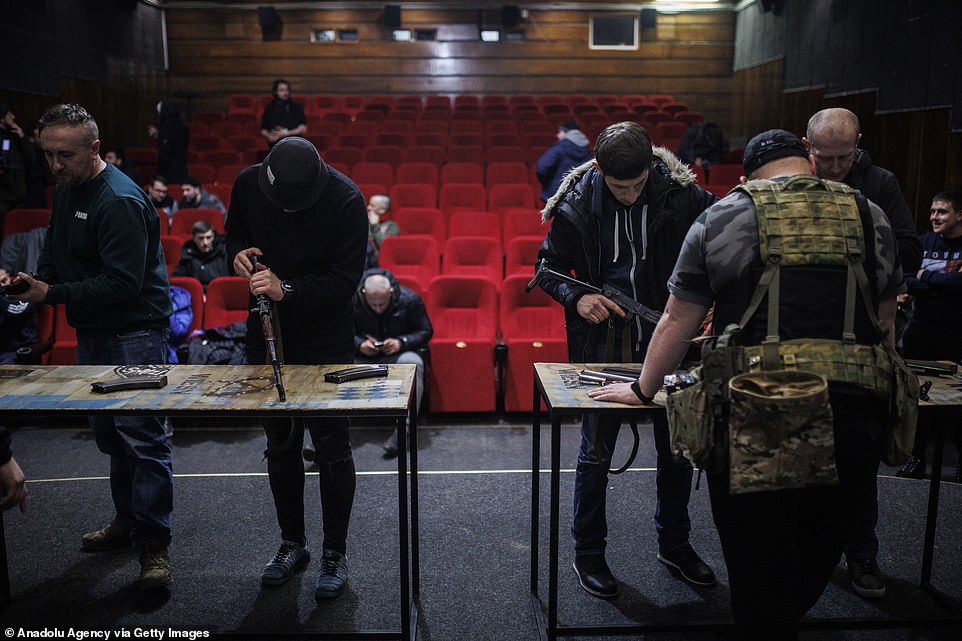 LVIV: Civilians learn to use AK47 rifles in a cinema at the Lviv Film Center on 5 March 2022

‘Ukraine is bleeding,’ Foreign Minister Dmytro Kuleba said in a video released Saturday, ‘but Ukraine has not fallen.’

Russian troops advanced on a third nuclear power plant, having already taken control of one of the four operating in the country and the closed plant in Chernobyl, Zelenskyy told U.S. lawmakers.

Zelenskyy pleaded with the lawmakers for additional help, specifically fighter planes to help secure the skies over Ukraine, even as he insisted Russia was being defeated.

‘We’re inflicting losses on the occupants they could not see in their worst nightmare,’ Zelenskyy said.

Russian troops took control of the southern port city of Kherson this week. Although they have encircled Kharkiv, Mykolaiv, Chernihiv and Sumy, Ukrainian forces have managed to keep control of key cities in central and southeastern Ukraine, Zelenskyy said.

Diplomatic efforts continued as U.S. Secretary of State Antony Blinken was in Poland to meet with the prime minister and foreign minister, a day after attending a NATO meeting in Brussels in which the alliance pledged to step up support for eastern flank members.

In Moscow, Israeli Prime Minister Naftali Bennett met with Putin at the Kremlin. Israel maintains good relations with both Russia and Ukraine, and Bennett has offered to act as an intermediary in the conflict, but no details of the meeting emerged immediately.

However, Bennett’s office said he spoke twice with Zelenskyy afterward. Bennett also had a conversation with French President Emmanuel Macron.

In the wake of Western sanctions, Aeroflot, Russia’s flagship state-owned airline, announced that it plans to halt all international flights except to Belarus, starting Tuesday.

The death toll of the conflict was difficult to measure. The U.N. human rights office said at least 351 civilians have been confirmed killed since Russia’s invasion of Ukraine on Feb. 24, but the true number is probably much higher. The Russian military, which doesn’t offer regular updates on casualties, said Wednesday that 498 of its troops had been killed.

Ukraine’s military is vastly outmatched by Russia’s, but its professional and volunteer forces have fought back with fierce tenacity. Even in cities that have fallen, there were signs of resistance.

Onlookers in Chernihiv cheered as they watched a Russian military plane fall from the sky and crash, according to video released by the Ukrainian government. In Kherson, hundreds of protesters waved blue and yellow Ukrainian flag sand shouted, ‘Go home.’

Zelenskyy has pleaded for a no-fly zone over his country and lashed out at NATO for refusing to impose one, warning that ‘all the people who die from this day forward will also die because of you.’

Putin warned that a no-fly zone would be considered a hostile act, and NATO has said it has no plans to implement one. Western officials have said a main reason is a desire to not widen the war beyond Ukraine.

The U.S. Congress is considering a request for $10 billion in emergency funding for humanitarian aid and security needs. The U.N. said it would increase its humanitarian operations both inside and outside Ukraine, and the Security Council scheduled a meeting for Monday on the worsening situation.

As Russia cracks down on independent media reporting on the war, more major international news outlets said they were pausing their work in that country. Putin said nothing warrants imposing martial law at this point.

And in a warning of an impending hunger crisis yet to come, the U.N. World Food Program has said millions of people inside Ukraine, a major global wheat supplier, will need food aid ‘immediately.’