Police have charged a man whose car hit a bus, killing his passenger, in Sydney on Saturday.

The BMW driver is facing charges of dangerous and negligent driving and driving through a red light.

A 46-year-old woman died at the scene of the accident, which occurred just after 8am on Argyle Street at Parramatta. 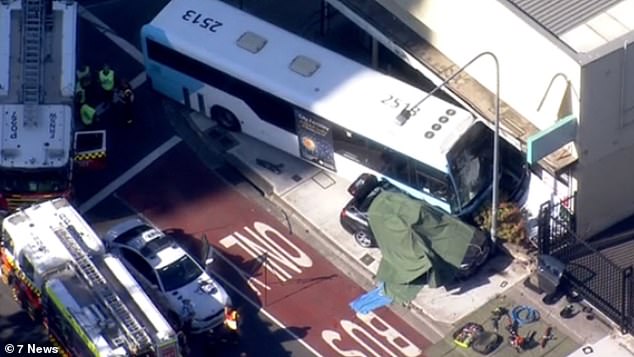 The front-seat passenger in the sedan, a woman believed to be aged in her 40s, was unable to be freed from the wreckage and has died at the scene 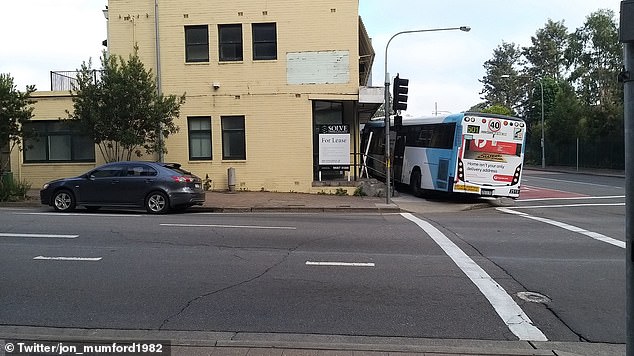 Police were called to Argyle Street, near the intersection with O’Connell Street, in Parramatta shortly after 8am on Saturday after a sedan and bus collided

She was unable to be freed from the wreckage after the man’s grey BMW sedan collided with the bus.

The BMW driver, 54, was charged at Parramatta Police Station after he was released from hospital.

The 66-year-old bus driver was also taken to Westmead Hospital with minor injuries. The bus was carrying no passengers at the time.

The BMW driver will appear in Parramatta Local Court on June 9.

In a separate incident, an 18-year-old P-plater has been charged over the death of a motorcyclist at Lidcombe in Sydney’s west on Saturday.

The woman’s Toyota Prado SUV allegedly clipped the back of the man’s trail bike shortly before 3pm.

Police officers who happened to be in the area gave the bike rider first aid but he died shortly after being taken to Westmead Hospital.

He is believed to be in his 20s, police say.

The woman has been charged with negligent driving occasioning death. She will appear before Burwood local Court on May 13.