No need to boast: Squirrel catches people’s attention as he seemingly shows off his nuts and ripped physique

An unsuspecting Missouri woman had to a do a double take when she spotted a ‘ripped’ squirrel with a pair of large nuts – and not the edible kind.

Sarah Lenzenhuber managed to picture the critter, who has also been graced with a ‘six pack’, outside her apartment.

‘I saw him while out walking my dog, did a double take and then doubled over laughing,’ Sarah said.

‘I wasn’t sure if I should post it anywhere but then my grade school sense of humour got the best of me.’ 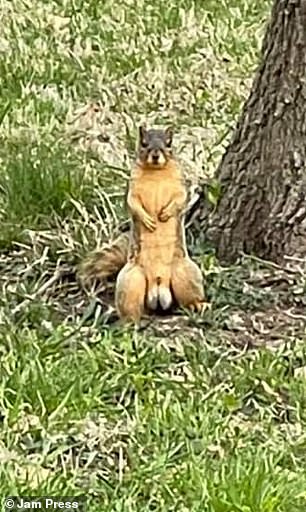 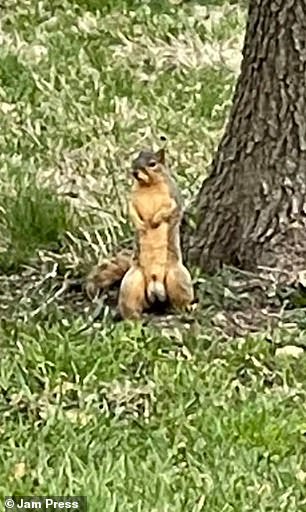 Sarah later shared the image on Facebook, where the post has attracted more than 4,000 likes and 800 comments.

In the picture, the squirrel stands upright next to a tree and poses unashamedly for the camera – showing off a physique that people online have dubbed ‘ripped’ thanks to his apparent ‘six pack’ and ‘abs’.

But viewers couldn’t help but focus on something a little further south… as the squirrel appears to have unusually large testicles.

‘His nuts are bigger than his head,’ one person commented.

Another commented: ‘Wow, he’s got quite the stockpile of nuts for the winter’, while one woman joked ‘his nuts are bigger than my partner’s’.

One user said: ‘I’ll bet he has to be careful climbing trees and jumping from branch to branch’. 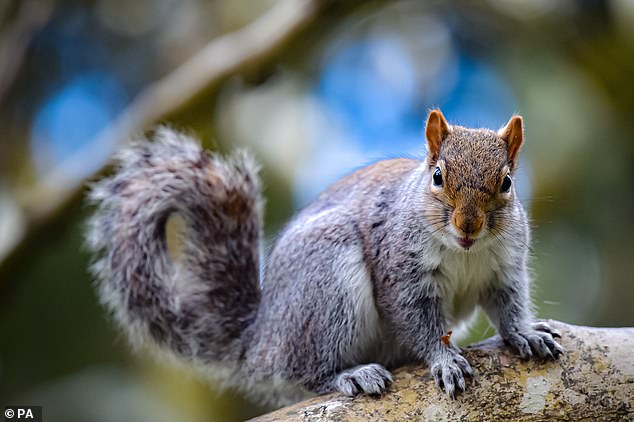 According to National Geographic, male squirrels have a scrotum that is 20% of their body length, excluding the tail

Other viewers called the snap ‘shocking’ and ‘impressive’, while one fan dubbed the squirrel a ‘show off’.

Although the male rodent appears to be particularly well-endowed, according to National Geographic, male squirrels have a scrotum that is 20% of their body length, excluding the tail.

As well as his seemingly sizeable scrotum, the creature’s entire physique commands attention from his new fan base.

‘Dude not only is he endowed, he’s ripped – look at those pecks,’ one person said.

Another person commented: ‘Does he have a six pack too?’

‘Wow, those abs!,’ someone else said.

This squirrel isn’t the only animal to hit the news this week.

An overheating Golden Retriever puppy opened a fridge door and climbed inside to cool down as sweltering summer temperatures reached 107 degrees Fahrenheit in Thailand.

Meanwhile, a 28-day-old bear cub named Boncuk was pictured locked in a heartwarming embrace with a chimpanzee at a zoo in Turkey.