At 2,350m we rested. The plain of Beret, a little-known valley in the Spanish Pyrenees, lay beneath, protected by a jagged sea of white peaks.

Our ski guide, Anna, was telling us about a Serbian alpha-male bear imported to help ‘re-wild’ her mountains. He had recently gone rogue and started eating the local horses.

Eating a horse, figuratively, didn’t seem such a bad idea after a morning of skiing on and off-piste through myriad micro-climates, including snow showers, fog, cloud and sunshine. 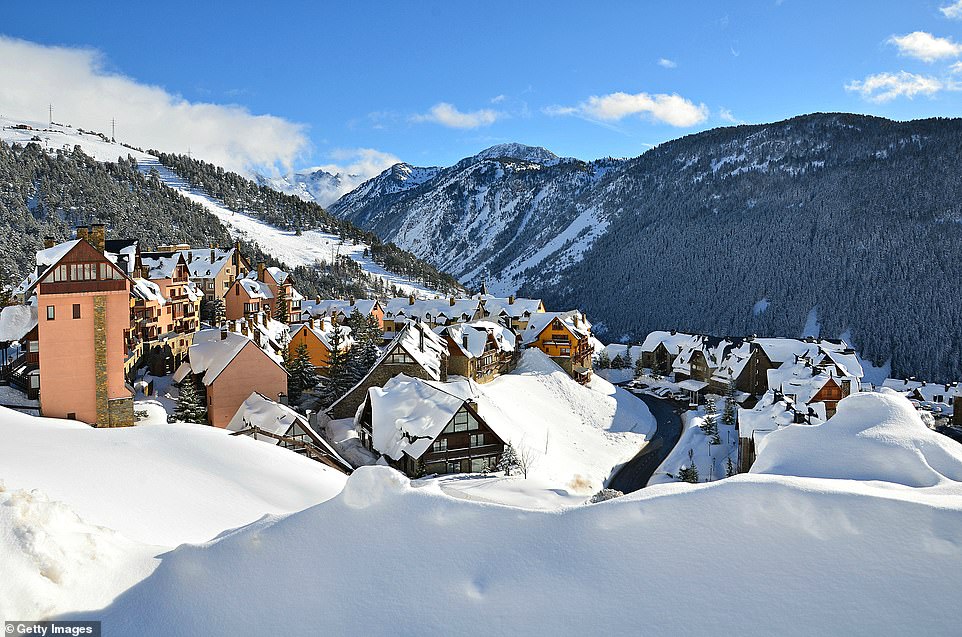 Winter wonderland: Pictured is Baqueira’s snowy mountainscape in the heart of the Pyrenees

My friend Richard and I had escaped for a weekend in Baqueira, a resort in the ‘valley of valleys’ (literal translation of Val d’Aran), in the heart of the Pyrenees, so tucked away that until a tunnel was built in around 1950, it was cut off from the outside world for five months every winter.

With the first lift opening in 1964, the main resort is purpose-built, but strict regulations mean that almost all the buildings are wood-and-stone clad.

The resort boasts it is the most-visited skiing destination in Spain and a favourite of the country’s former king and queen, Juan Carlos and Sofia, and their aristocratic friends. That makes it sound big and glitzy. 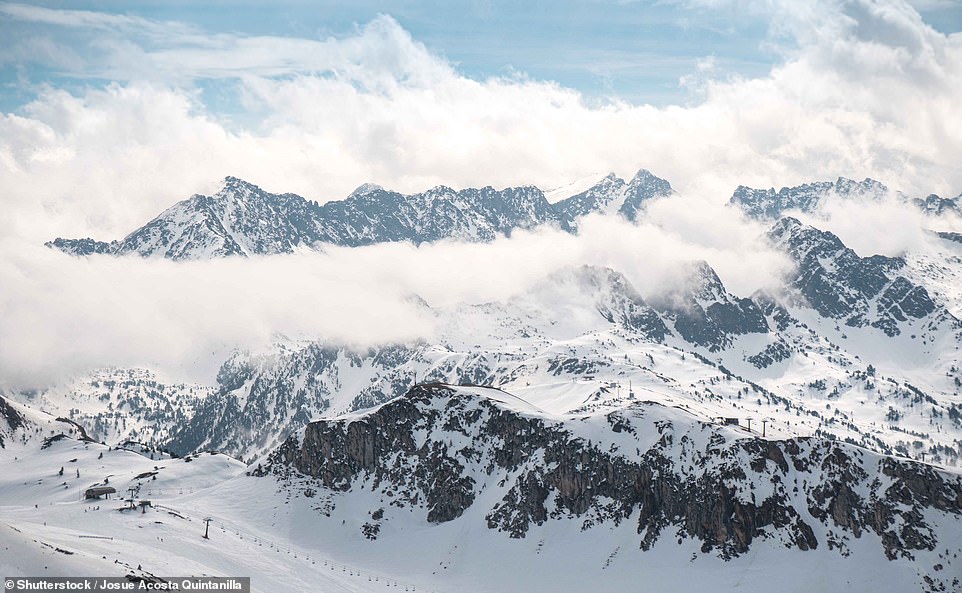 The slopes near Baqueira. The resort offers ‘167 km of piste, plus another 100 km of accessible off-piste and a further 400 km of heli-skiing terrain’ 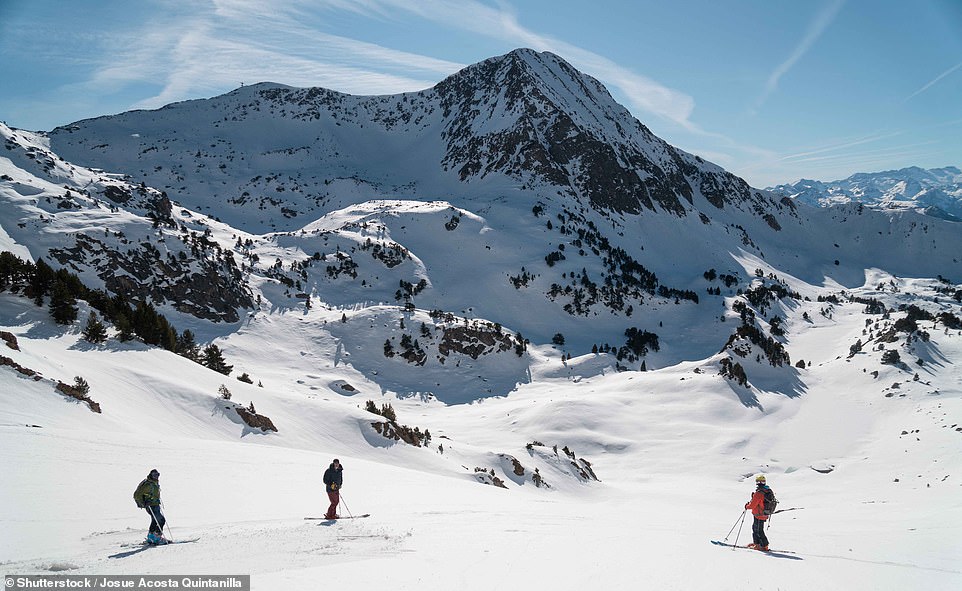 Skiers on Beret. Mark reveals that the peak – one of eight in the area – is ‘thrillingly wild and beautiful’

A stay at Landhaus in Mayrhofen, Austria, costs from £453 pp for seven nights’ B&B, including flights on February 12. The hotel is a short walk from the town’s bars, restaurants and main gondola (crystalski.co.uk).

Seven nights all-inclusive at Hotel Le Mottaret in Meribel Mottaret from £1,676 pp on February 14. Town centre and the lifts are both nearby (igluski.com).

A week’s B&B at Hotel Edelweiss in the Ski Juwel area is from £739 pp on February 12. This hotel is close to the ski bus stop and has lovely views (inghams.co.uk).

The reality is more complicated. The place is physically large, with 167 km of piste, plus another 100 km of accessible off-piste and a further 400 km of heli-skiing terrain. The village lives off the mountain. Schools, hospitals, fire engines and rubbish collections are all subsidised. The lift operators, instructors and managers are locals who have worked together all their lives.

The mountain pays the mayor and the mayor runs everything. The mayor also went to school with the lift operators, instructors and managers.

All of which means that if you are spending money on the mountain, you are one of the family. And that means olha soup. We heard about it at least a dozen times in 48 hours, especially the rule that this broth of pate, sausage, garlic and herbs must always be ready on the hob for an unexpected visitor staggering in from the cold.

‘People come here for skiing as good as the Alps, with the friendliness and the prices of Spain,’ said a guest at our hotel.

The pistes form a cat’s cradle, linking eight peaks from 2,320 m to 2,656 m in four overlapping areas: Beret, Baciver, Baqueira and Bonaigua. Beret, our favourite, is thrillingly wild and beautiful at the top of the valley, plunging down to Audeth where you can hire a team of huskies to drag you 6 km to the deserted village of Montgarri.

We stayed at hotel La Pleta in the high part of Baqueira village just below the regally creaky Esquiros chairlift. Numerous delightful young staff, taking time off writing doctorates on Cervantes, magic your boots on and off and carry clanking skis in and out of lockers, only occasionally getting them muddled up like spillikins. 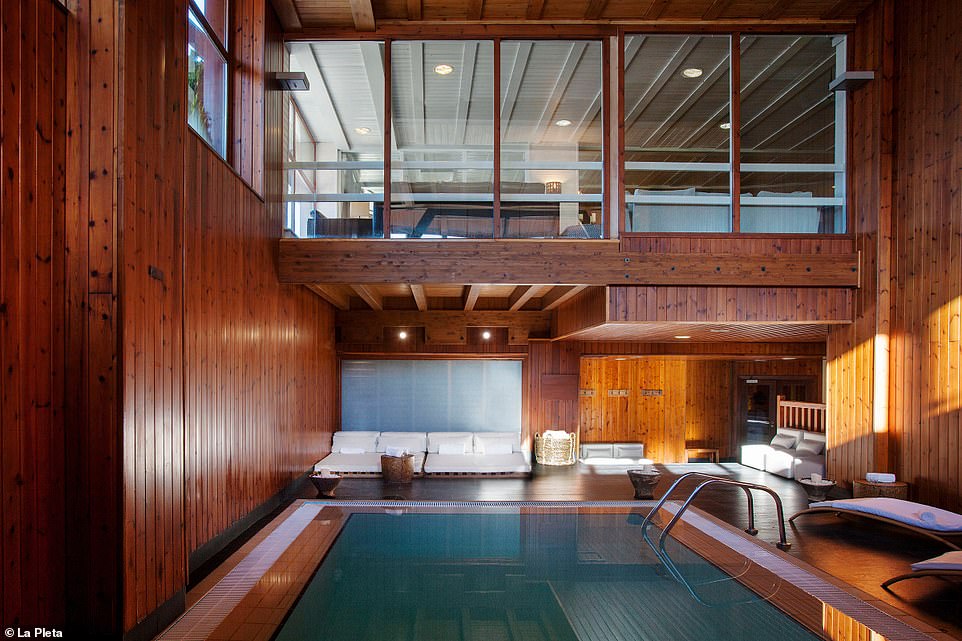 Mark stayed at hotel La Pleta in the high part of Baqueira village just below the ‘regally creaky’ Esquiros chairlift. Pictured is the hotel’s spa 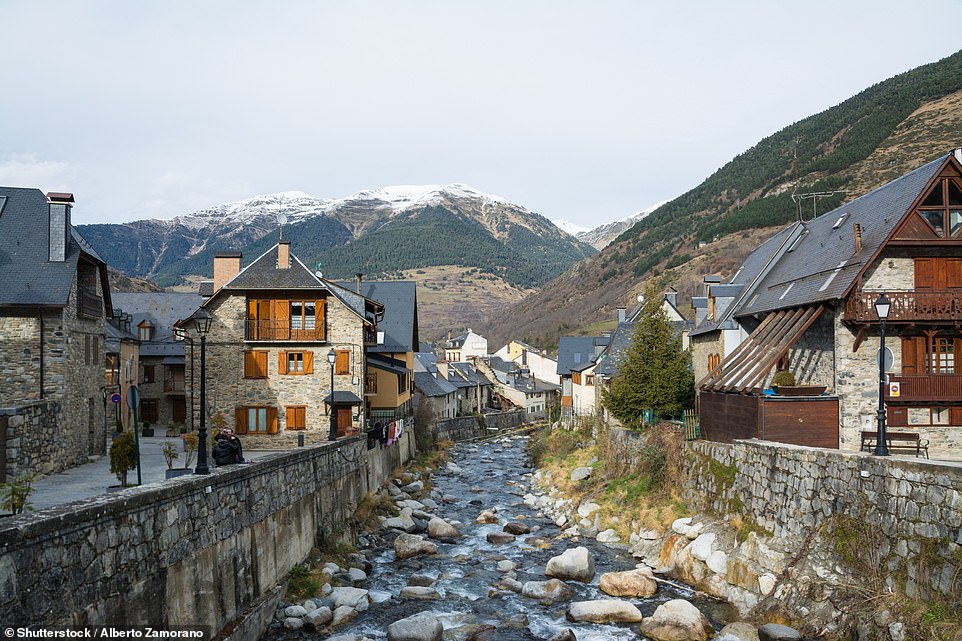 One evening, Mark dined at Eth Restile tapas bar just off the old market square in the village of Vielha (pictured) 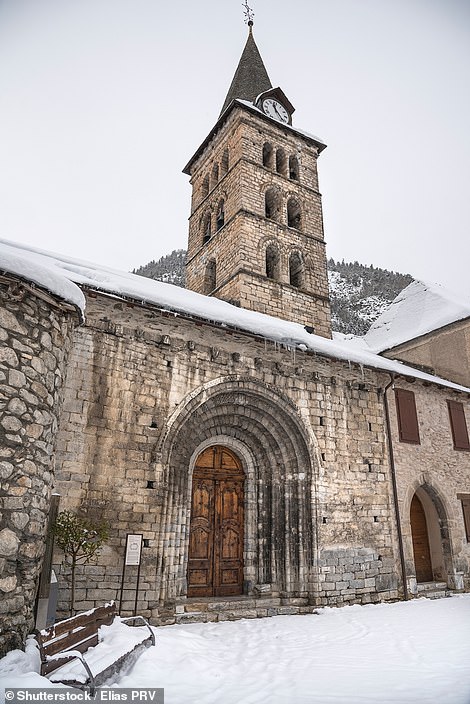 The Church of Santa Maria in Arties. Mark visited the town and ‘plunged into a seething mass of good-natured Spanish diners in the Taverna Urtau’

One of the rules of a stay here should be to have a car and enjoy eating in the villages scattered about the valley, such as Vielha, Garos, Arties and Salardu.

One evening we plunged into a seething mass of good-natured Spanish diners in the Taverna Urtau in Arties. The drill here was tapas and pinchos (roughly: ‘snacks and nibbles’) at a table with much shouting and gesticulating at hassled waiters.

Another night we ate at Eth Restile tapas bar just off the old market square in Vielha. The manager suggested tapas and, naturally, olha soup. Here you go down to the cellar to pick your own bottle of wine.

Many discerning British skiers have declared Baqueira their favourite resort.

Why, then, is it still relatively little-known?

The only sensible reason is logistics. There’s no nearby airport. From the UK you fly to Toulouse, in southern France. There you must pick up a hire car and drive for two-and-a-half hours.

In the end it was another local, Juan, who reminded us of the most moving story of the valley. In the winter of 1942, German-run France started to round up Jews for the concentration camps. Spain offered sanctuary. It was here that a stream of refugee families was led over high passes to safety, protected by the silence of the shepherds. And perhaps a bowl of olha soup.