Southwest Airlines wouldn’t let an Iowa family on their connecting flight home because their 5-year-old son, who has autism, couldn’t wear his face mask.

Cody and Paige Petek’s young son, who is nonverbal and has autism and a sensory processing disorder, was struggling to wear his mask and was kicked off their plane from St. Louis to Des Moines, KCCI reported.

So Petek’s hour-long plane ride became a nearly six-hour drive home in a rental car, according to KCCI.

Southwest Airlines turned them away, claiming they were following federal laws. 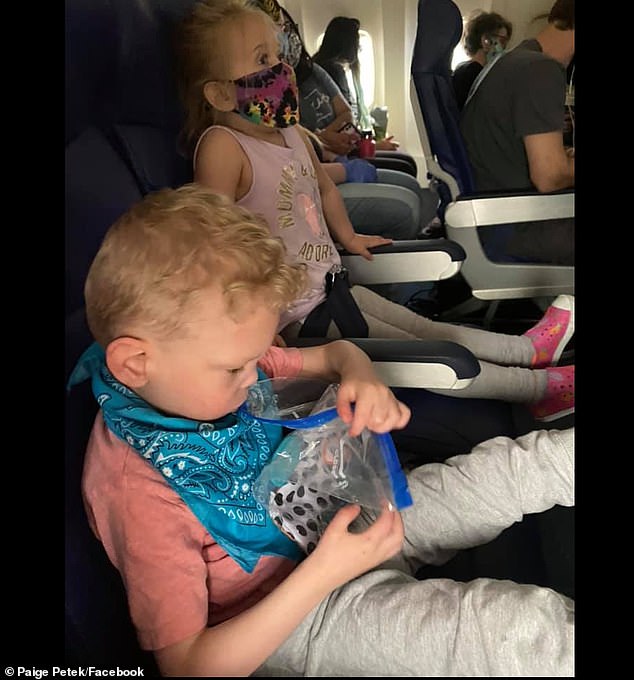 Cody and Paige Petek’s young son, who is nonverbal and has autism and a sensory processing disorder, was struggling to wear his mask before the family boarded their plane from St. Louis to Des Moines 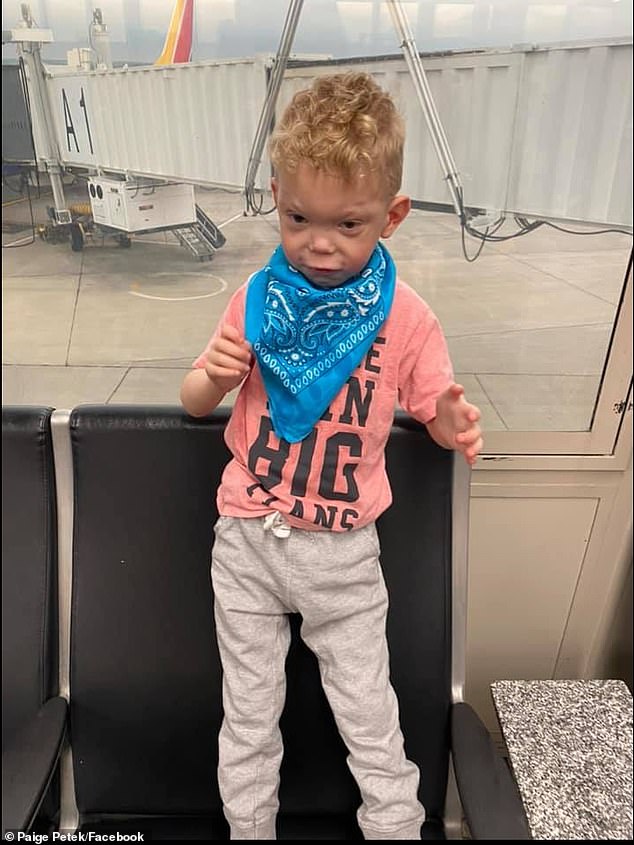 The Petek family wasn’t kicked off a Southwest Airlines plane because their young son, who has autism, couldn’t put on his face mask, KCCI reported 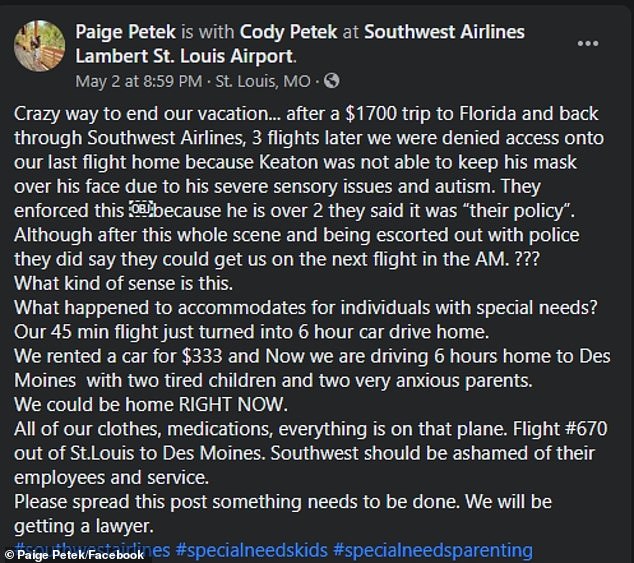 Vince Hassel, who was also flying back to Des Moines, told KCCI that other passengers fought to get the boy and his family on board.

‘He just wasn’t having it and throwing a fit. Just to watch this play out was absolutely horrible,’ Hassel told KCCI.

The young boy had a seizure during the struggle, according to KCCI.

TSA policy states that people with disabilities who cannot wear a mask because of the disability are exempt from having to wear a mask.

‘There’s clear guidance from the department of transportation about what the airline should do,’ Marchetti told KCCI. ‘None of that happened here.’ 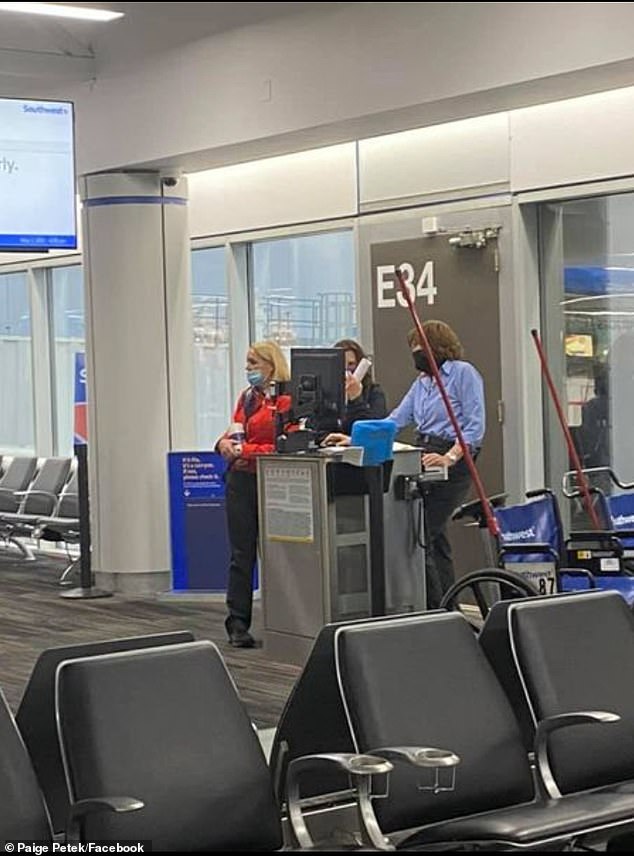 While Southwest couldn’t be reached, the Airline did issue the following statement to KCCI:

‘While we regret any inconvenience this family experienced while traveling, federal law requires each person, 2 years of age and older, to wear a mask at all times throughout the travel journey … To assist travelers with disabilities, there is a narrow exception to the mask mandate for specific types of disabilities that prevent a person from wearing a mask.

‘Southwest Airlines considers applications for exemptions from this mask requirement from passengers with a disability who cannot wear a mask, or who cannot safely wear a mask because of the disability… In this case, a traveler was not wearing a face covering prior to boarding and did not have an exemption to the federal mask mandate.

‘Southwest Employees tried to assist the family by encouraging the child’s face covering be placed over the mouth and nose. Once the family was unable to meet the federal requirement, Southwest offered the family a hotel for the night and to rebook them on a flight today to allow them additional time to comply. Instead, the family chose not to fly and was granted a full refund.

‘It’s the responsibility of Southwest employees to enforce federal regulations. As always, we appreciate the spirit of compliance to the federal mask mandate and the ongoing cooperation among our customers and employees as we work collectively to support the comfort and wellbeing of all who travel with us during the ongoing COVID-19 pandemic.’ 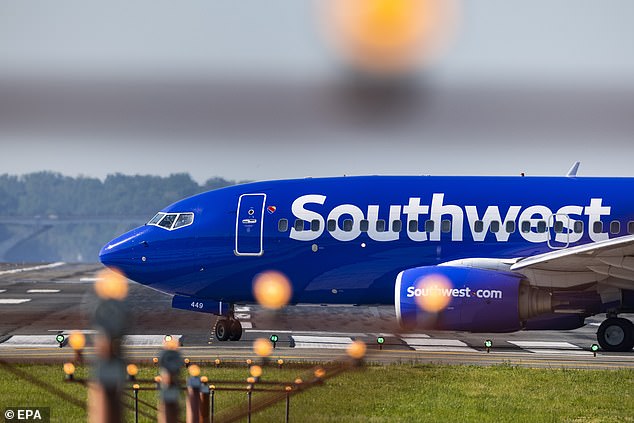 Southwest Airlines released a long statement to KCCI, saying they were following federal laws and ‘there is a narrow exception to the mask mandate for specific types of disabilities that prevent a person from wearing a mask’ 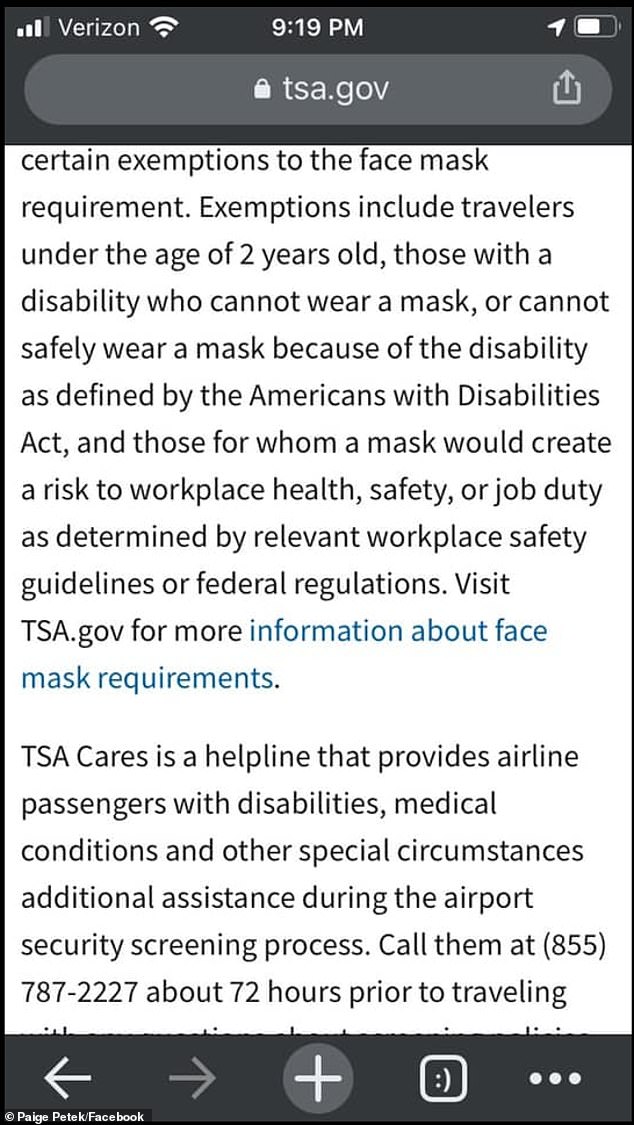 Southwest Airlines booted another family off their plane in early April because their two-year-old couldn’t keep his facemask on.

That situation ended up with a better ending after Erik Harvey’s video talking about the experience went viral, and pilot James Peck saw it and gave them a free plane ride home.

Southwest Airlines also is fighting a $3 million lawsuit from one of its flight attendants, who claims the airline didn’t do anything to protect its own employees from the coronavirus.

In the lawsuit filed about two weeks ago, Carol Madden, 69, blamed the company for her husband’s COVID-19-related death after she unknowingly contracted the coronavirus just days after a mandatory July 2020 training session and spread it to her husband Bill, who died a month later.

She said there were no hand sanitizers, symptom or temperature checks, health screenings, gloves for hands-on training, education about the harms of touching eyes and face, and no social distancing during the training session, according to the lawsuit.