Shocking CCTV footage from New Zealand shows a police officer allegedly kicking a handcuffed suspect in the head while he’s lying on the ground.

The video, which has been circulating on social media, shows the moment two officers arrest a 44-year-old man in an alleyway in Christchurch.

The man can be seen being handcuffed and restrained on the ground, allegedly kicking out at the two cops in resistance – before the male policeman appears to punt the suspect in the head, leaving him dazed.

‘Come on dude, stand-up, you’re alright,’ the police officer can be heard saying in the clip. 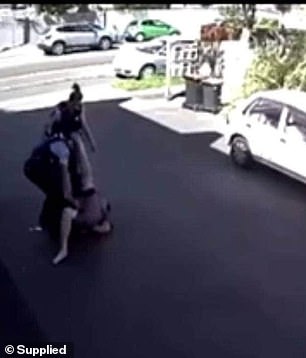 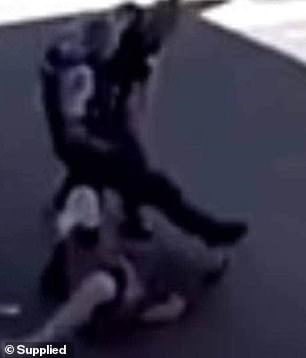 Canterbury Police say they were called to Madras Street in Christchurch on two different occasions within a short period of time after reports of a drunk and disorderly man on March 2.

The man ‘began to actively resist the attending officers and was taken to the ground in an attempt to keep everyone involved safe,’ Metro Area Commander Superintendent Lane Todd said.

The footage shows the man, restrained on the ground lying on his stomach before he’s turned over by police.

The suspect then starts kicking out at the officers as they attempt to stand him up.

He then kicks out and appears to hit the male police officer in the face, as the cop responds and purportedly punts the handcuffed man’s face.

Police say the officer was attempting to put his boot on the man’s shoulder but he missed, kicking his head.

‘Following this, one officer attempted to place the sole of his foot on the man’s shoulder, however the man has moved, causing the officer’s foot to connect with his head once.’ 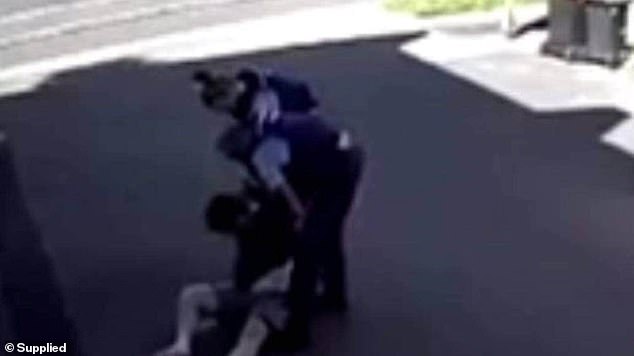 Social media was divided over the footage, with many slamming the cop but some defending his actions and asking people what they’d do in the same situation.

‘Some will scream brutality for sure, but ah well, love to see them handle the situation better,’ one person tweeted.

‘If I’d stomped on that coppers face like you’re about to see I’d be going to jail for a very long time and it would be an attempted murder charge. What that cop did was a stomp down on his face, raking his boot up the nose, that could’ve killed him,’ another disagreed.

Police say the video doesn’t show the full story and it was a ‘fast-moving and dynamic situation’.

Both officers were treated for minor head injuries following the arrest.