A dark-clothed and masked gang tried to murder a schoolgirl, 15, as she waited to catch the bus home in a brutal drive-by shooting on electric bikes.

Merseyside Police were today hunting a group of at least four people after the attack just after 5.10pm last night in Toxteth, Liverpool.

Detectives believe the girl was deliberately targeted and are questioning a 21-year-old man on suspicion of attempted murder.

Police – who are appealing for witnesses and any dashcam or phone footage – said they are also currently holding a 60-year-old on suspicion of assisting an offender.

The victim, who cannot be named for legal reasons, suffered ‘devastating injuries’ as she was hit in the lower body after a number of shots.

Police are probing the theory there may have been more than one shooter amid the four-bike gang.

They are also believe it could be linked to the shooting of another man in his 20s, who arrived at hospital later that night with a gun wound.

The girl – who was rushed to hospital in a critical condition – had this lunchtime improved to serious, but stable.

Detective Chief Superintendent Mark Kameen called it a ‘callous and cowardly attack’ and added: ‘Unfortunately I find myself before you here today to talk about a shooting that took place in Toxteth last night, which resulted in an innocent 15-year-old schoolgirl being shot as she waited for a bus home from school with her friend. 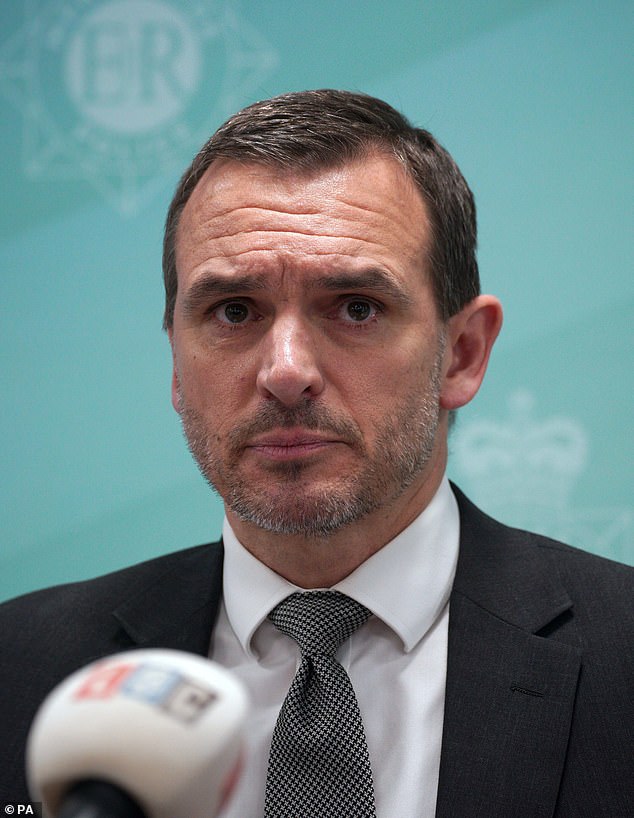 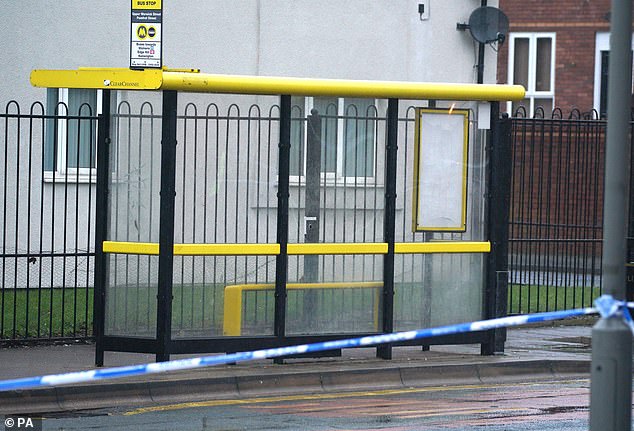 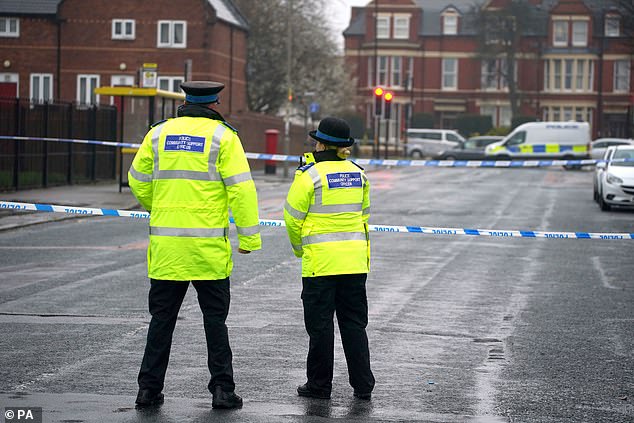 Police community support officers at the scene in Upper Warwick Street in Toxteth, Liverpool, after a teenage girl was seriously injured in a shooting incident late Tuesday afternoon

‘It is an absolute miracle and a credit to the NHS that this young woman has survived.

‘We were called at about 5.20pm yesterday evening to a person having been shot at a bus stop as a result of a number of individuals on up to four bikes. We believe those could have been electric bikes.

‘At this moment in time we think shots were fired from one or more people in those bikes.

‘All of the people on those bikes were wearing dark clothing, were wearing facemasks or some sort of face covering like a balaclava.

‘One the shooting had taken place we believe the bikes made off towards the north hill street and princess road area of the city which is very close to where the attack took place.

‘When the ambulance crew arrived following calls from members of the public they found a young girl who suffered a gunshot wound to her upper body and some devastating injuries.

‘A short time later we received a further report of another shooting where a 21-year-old turned up to hospital with a gunshot room to his arm. One of the lines of enquiry is that these two incidents are connected. 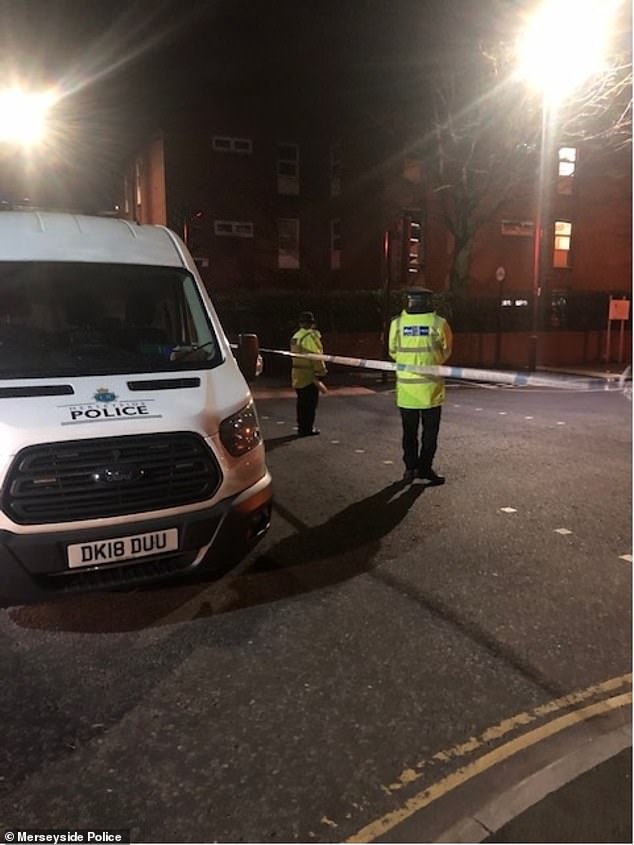 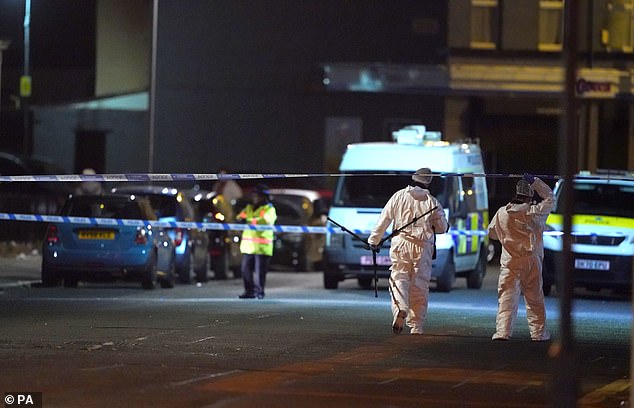 Merseyside Police (pictured) were contacted this evening at 5.10pm following reports that shots had been fired on Upper Warwick Street in the city of Toxteth and a 15-year-old girl had been injured 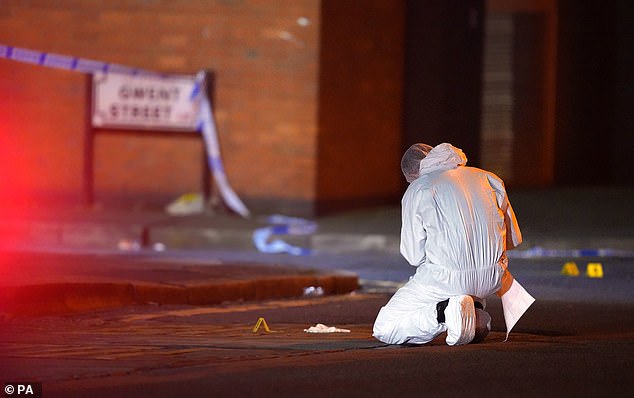 ‘It shows a total disregard and contempt that they have for the decent honest law abiding people who live work and visit this city.’

House-to-house enquiries have been carried out and officers will also be checking CCTV in a bid to establish the circumstances of the incident.

Forensic examinations have also been carried out at the bus stop, which has a shattered screen.

In a statement yesterday, Merseyside Police said: ‘We can confirm that officers are this evening, Tuesday 1st March, at the scene of an injury shooting in Toxteth.

‘We were contacted at 5.10pm following reports that shots had been fired on Upper Warwick Street and that a teenage girl had been injured. The girl has been taken to hospital where she is currently in a serious condition.

‘A short time later a man, in his 20s, turned up at hospital with a gunshot injury to his hand, which is not life threatening. Enquiries are being carried out to establish if the two injuries are linked.

‘An investigation is underway and house-to-house, forensic and CCTV enquiries are being carried out in the local area. A number of roads in the area have been sealed off as enquiries continue.’ 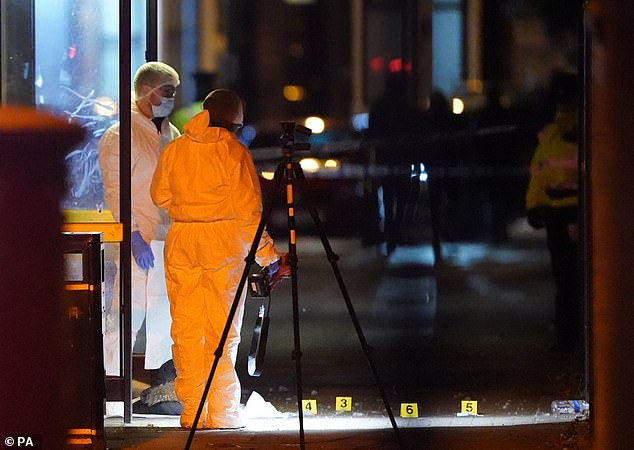 A short time later a man, who is in his 20s, turned up at hospital with a gunshot injury to his hand, which is not believed to be life-threatening 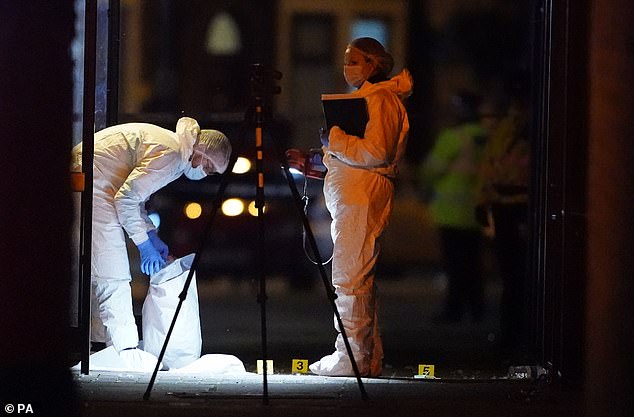 Police have launched an investigation and are appealing for any witnesses to come forward. Enquiries are currently being carried out to establish if the two injuries are linked

Merseyside’s Police Commissioner Emily Spurrell tweeted: ‘Deeply shocking and upsetting to learn a teenage girl has been injured during a shooting on the streets of Toxteth.

‘My thoughts are with her and her family. I wish her a very speedy and full recovery. If you have any info, please come forward & help bring those responsible to justice.’

Chief Inspector Col Rooney added: ‘The investigation is in the very early stages as we seek to establish what has taken place and who was involved.

‘While I understand this is a shocking incident for the local community we have a large police presence in the area carrying out a number of lines of enquiry and I would encourage people to come forward and tell us what they know.

‘I would ask anyone who was in the area of Upper Warwick Street around 5.10pm this evening who saw or heard anything suspicious or thinks they have captured anything significant on their mobile phone, dashcam or Ring doorbell to contact us as a matter of urgency.

‘There is no room for guns on the streets of Merseyside and we will do everything we can to find the person or people responsible for this incident and bring them to justice.’

Anyone with information is asked to DM @MerPolCC or @CrimestoppersUK on 0800 555 111 anonymously quoting log 647 of 1st March.