Russian politicians who voted to recognise the independence of Donetsk and Luhansk are now saying they regret their decision and have condemned Vladimir Putin’s invasion.

Dissent to the war is growing not only on the streets in Russia, with thousands arrested during protests, but also in parliament where dissent against the leader is rare.

Three members of the Communist Party, which typically remains loyal to Putin on key issues, have spoken out against the military action, saying they did not realise what they were voting for.

Vyacheslav Markhaev, a senator from Siberia, wrote on Facebook that Putin ‘hid plans to unleash a full-scale war with our closest neighbour’.

His remarks follow two of his party colleagues who have denounced the invasion. 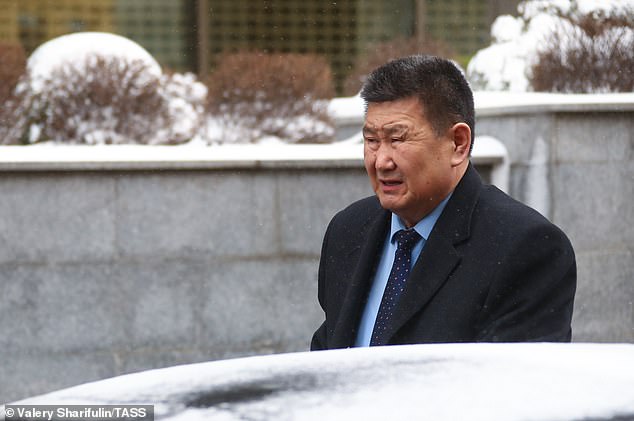 Vyacheslav Markhaev, a senator from Siberia, said he did not realise Vladimir Putin would launch an invasion 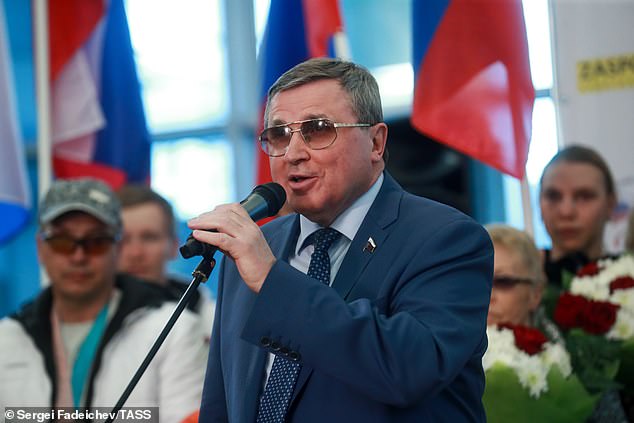 Oleg Smolen said he was ‘shocked’ by the invasion, saying military force should only be used as a last resort 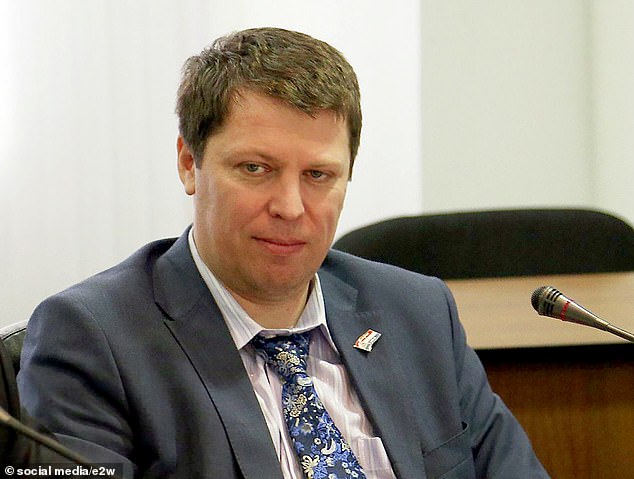 Mikhail Matveyev from Samara also called for the war to be stopped, saying he ‘voted for peace, not for war’

Oleg Smolen said he was ‘shocked’ by the invasion, saying: ‘As a Russian intellectual, I am convinced that military force should be used in politics only as a last resort.

‘I could not vote for the recognition of the Donetsk and Lugansk People’s Republics without betraying myself.’

Mikhail Matveyev from Samara also called for the war to be stopped, saying in a now-deleted tweet: ‘I voted for peace, not for war. For Russia to become a shield, so that Donbas is not bombed, and not for Kyiv to be bombed.’

Markhaev said members of Russia’s Duma, the lower house of the Federal Assembly, did not know the vote would lead to a full-scale invasion.

He wrote: ‘It is sad to watch what is happening around Ukraine, and it hurts the soul, imagining where our world and the whole world’s contribution can go.

‘We needed the recognition of the independence of the Republic of DPR and LPR to protect them from complete extinction. It was thought that this could be developed the possibility of continuing negotiations and finding new compromises to settle all sharp corners. 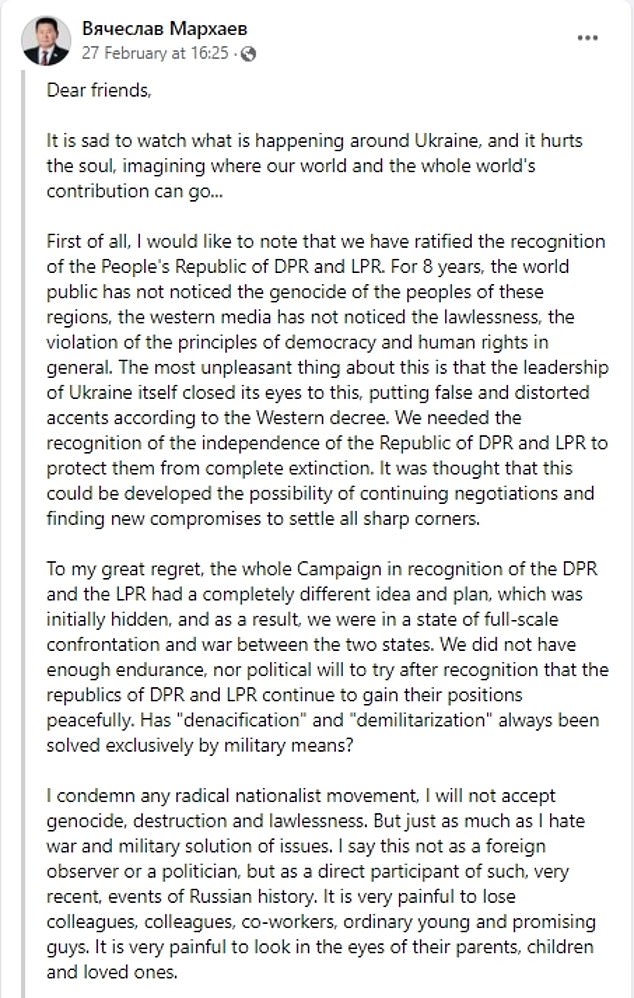 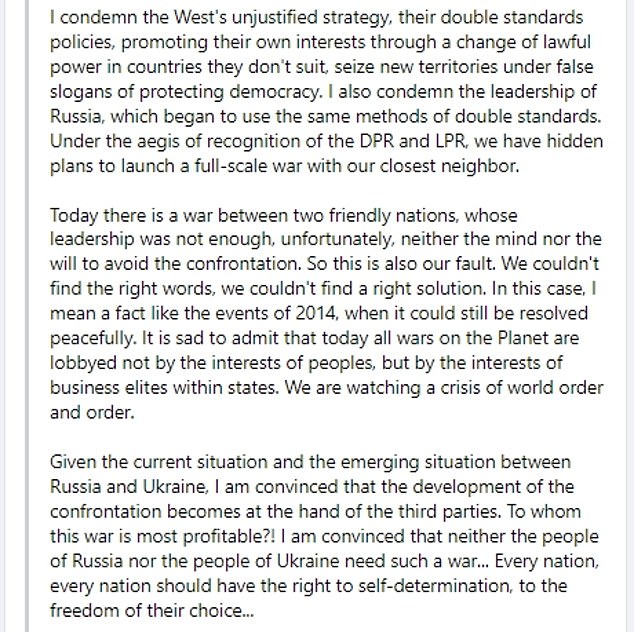 Markhaev said members of Russia’s Duma, the lower house of the Federal Assembly, did not know the vote would lead to a full-scale invasion

‘To my great regret, the whole Campaign in recognition of the DPR and the LPR had a completely different idea and plan, which was initially hidden, and as a result, we were in a state of full-scale confrontation and war between the two states.

He continued: ‘I condemn the West’s unjustified strategy, their double standards policies, promoting their own interests through a change of lawful power in countries they don’t suit, seize new territories under false slogans of protecting democracy.

‘I also condemn the leadership of Russia, which began to use the same methods of double standards. Under the aegis of recognition of the DPR and LPR, we have hidden plans to launch a full-scale war with our closest neighbor.’ 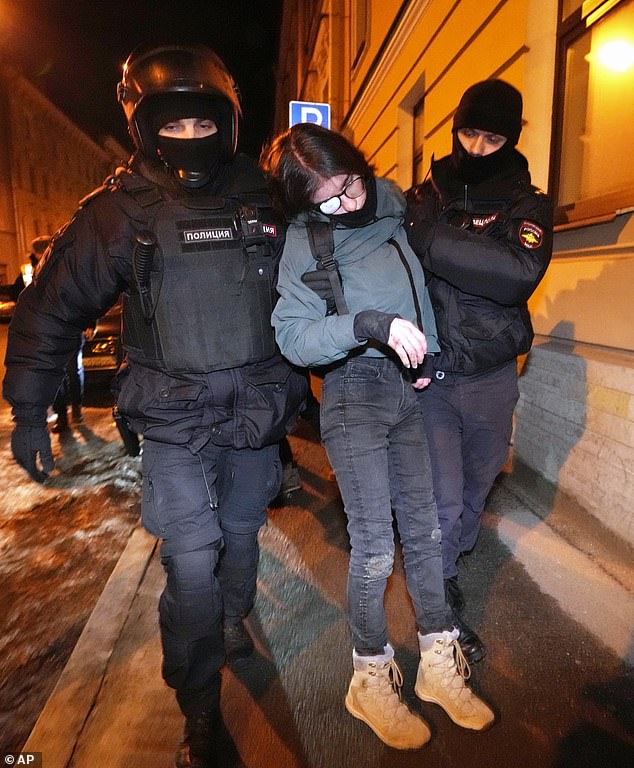 Many were detained, according to local media, and one woman lost consciousness while being arrested, Novaya Gazeta reports 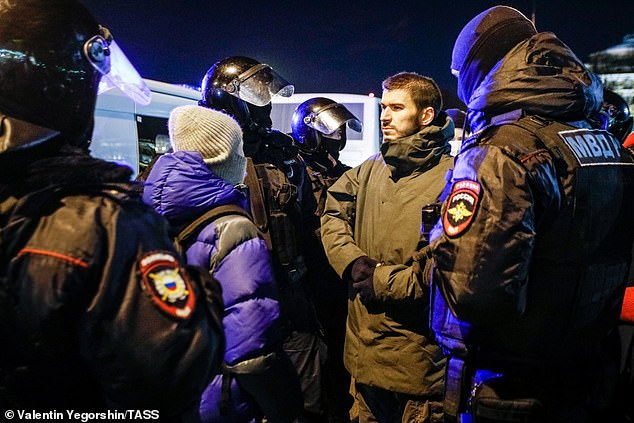 An online petition to stop the war which was launched shortly after the invasion was announced on Thursday has garnered over 1 million signatures, which made it the most widely-supported online petition in Russia in recent years.

Since the first day of the attack on Thursday, Russians in Moscow, St. Petersburg and dozens of other cities have been taking to the street to protest it – only to be swiftly, and often brutally, detained by police.

On Monday, the OVD-Info rights group that tracks political arrests counted at least 350 detentions of protesters in 13 Russian cities.

Over the past five days of protests, more than 6,000 people been detained, according to OVD-Info. 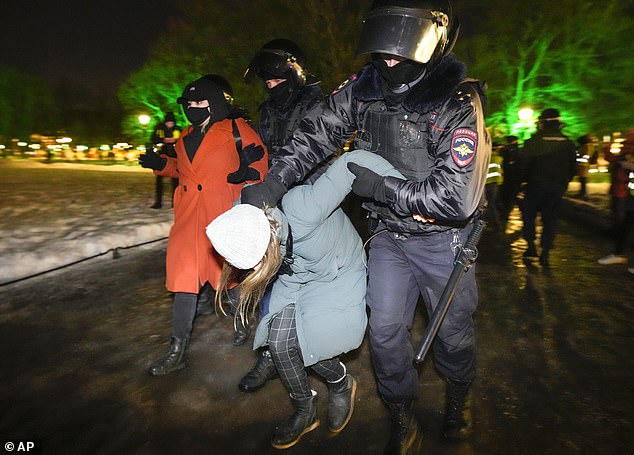 Videos on Telegram show protesters sitting on the floor, clapping, and chanting ‘no to war’ as others showed police taking protesters away

In an effort to stifle critical voices, Russian authorities have restricted access to Facebook, which has played an important role in amplifying dissent. Internet users also reported problems with accessing Twitter.

Russian officials have also pressured the media to cover the invasion in strict accordance with the official line and have bemoaned the reports that described Russia’s attack on Ukraine as an ‘invasion’ or ‘a war’ as untrue.

The website of the Current Time, a Russian TV channel launched by the U.S.-funded Radio Free Europe/Radio Liberty that has been critical of the Kremlin, became unavailable Sunday after the channel reported receiving a notification from the authorities.

‘I have two sons and I don’t want to give them to that bloody monster,’ Dmitry Maltsev, 48, who joined the rally in St. Petersburg, told The Associated Press. ‘War is a tragedy for all of us.’

Protests also took place in Belarus, where more than 500 people were detained on Sunday, according to the country’s most prominent human rights group.

The Viasna human rights center said demonstrations were held in at least 12 cities, including Minsk, the capital. Demonstrators placed flowers on a growing pile outside the Ukrainian Embassy.