Russia has told Ukraine it will stop its onslaught ‘in a moment’ if Kyiv meets a raft of Kremlin conditions as the two sides meet for a third round of ‘peace talks’.

Peskov said Ukraine was aware of the conditions. ‘And they were told that all this can be stopped in a moment,’ he added.

It was the most explicit Russian statement so far of the terms it wants to impose on Ukraine to halt what it calls its ‘special military operation’ in Ukraine, that is now in its 12th day and has reportedly resulted in the death of over 10,000 Russian troops.

Peskov’s statement came as a Russian delegation departed for Belarus to meet Ukrainian negotiators for the third round of talks about ending hostilities.

Russian Foreign Minister Sergei Lavrov and Ukrainian counterpart Dmytro Kuleba are also due to meet at a forum in Turkey on Thursday, Ankara said. It would be the first top-level meeting since Moscow launched its invasion on February 24. 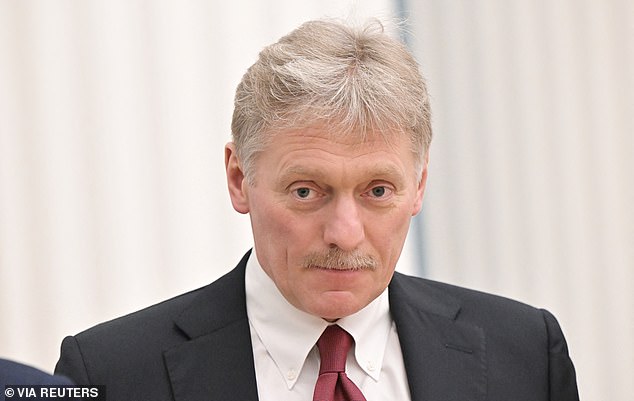 The Kremlin spokesman insisted Russia was not seeking to make any further territorial claims on Ukraine.

‘We really are finishing the demilitarisation of Ukraine. We will finish it. But the main thing is that Ukraine ceases its military action. They should stop their military action and then no one will shoot,’ he said.

‘They should make amendments to their constitution according to which Ukraine would reject any aims to enter any bloc,’ Peskov said.

‘We have also spoken about how they should recognise that Crimea is Russian territory and that they need to recognise that Donetsk and Lugansk are independent states. And that’s it. It will stop in a moment,’ Peskov told Reuters.

The invasion launched on Feb. 24 has caused thousands of both civilian and military deaths, has sparked the worst refugee crisis in Europe since World War Two, and provoked outrage across the world.

Russia has long demanded that Ukraine agree to rule out joining NATO. In 2019, Ukraine’s then-president Petro Poroshenko signed a constitutional amendment committing the country to striving to become a member of NATO and the EU.

Meanwhile, Mevlut Cavusoglu – Turkey’s foreign minister – announced today that Lavrov and Kuleba would meet in the resort city of Antalya. 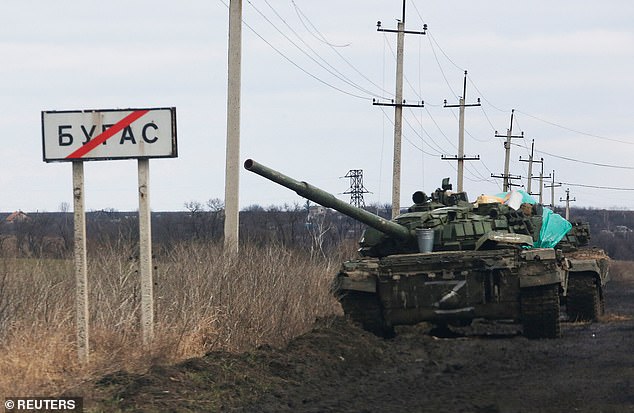 A tank with the symbol ‘Z’ painted on its side is seen in the separatist-controlled village of Bugas during Ukraine-Russia conflict in the Donetsk region, Ukraine March 6, 202 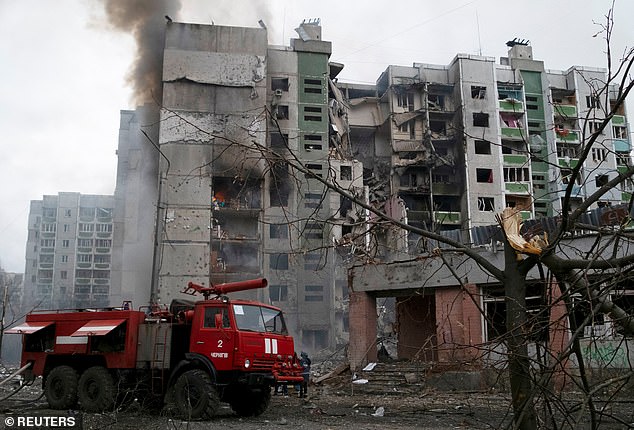 A view shows a residential building damaged by recent shelling, as Russia’s invasion of Ukraine continues, in Chernihiv, Ukraine March 3, 2022

NATO member Turkey, which shares a maritime border with Russia and Ukraine in the Black Sea, had been offering to mediate between the sides.

Ankara has good relations with both Moscow and Kyiv, and has called Russia’s invasion unacceptable even as it opposes sanctions against Moscow.

‘We especially hope that this meeting is a turning point and…an important step towards peace and stability,’ he said, adding both ministers had asked for him to join the talks.

Kuleba had said on Saturday he was open to talks with Lavrov but only if they were ‘meaningful’. 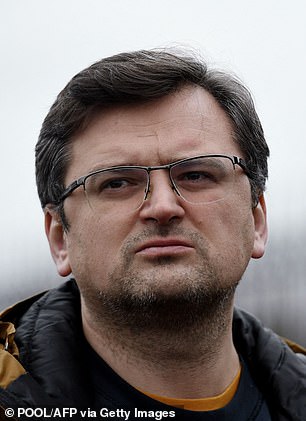 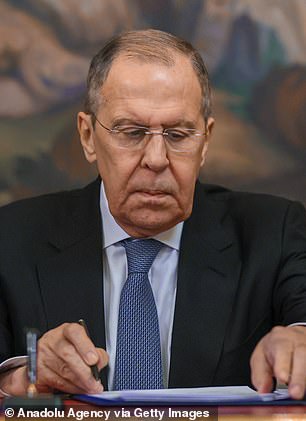 Russian Foreign Minister Sergei Lavrov (right) and Ukrainian counterpart Dmytro Kuleba (left) are also due to meet at a forum in Turkey on Thursday, Ankara said. It would be the first top-level meeting since Moscow launched its invasion on February 24

Russia announced new ‘humanitarian corridors’ on Monday to transport Ukrainians trapped under its bombardment – to Russia itself and its ally Belarus, a move immediately denounced by Kyiv as an immoral stunt.

The announcement came after two days of failed ceasefires to let civilians flee the besieged city of Mariupol, where hundreds of thousands of people are trapped without food and water, under relentless bombardment and unable to evacuate their wounded.

Russia calls its actions in Ukraine a ‘special military operation’. It has uprooted more than 1.5 million people in what the United Nations says is the fastest growing refugee crisis in Europe since World War Two.

While forging close relations with Russia on defence, trade and energy, and hosting millions of Russian tourists every year, Turkey has also sold drones to Ukraine, angering Moscow.