The United Nations General Assembly on Wednesday rebuked Moscow for its invasion of Ukraine with a resolution that demanded the withdrawal of all Russian forces.

Although it comes with no teeth, such resolutions are often a powerful political tool.

Wednesday’s resolution, which passed with the support of 141 members of the 193-nation body, came at the end of a rare emergency session – the first in 40 years -and signals the growing international isolation of Russia.

It came as Moscow’s troops pounded Ukrainian cities with air strikes and bombardments.

Thirty-five members including China abstained while five countries including Russia, Syria and Belarus voted against the resolution.

Before the vote, US Ambassador to the UN Linda Thomas-Greenfield, warned that Russian forces appeared poised to step up their assault.

‘We have seen videos of Russian forces moving exceptionally lethal weaponry into Ukraine, which has no place on the battlefield, she said.

‘That includes cluster munitions and vacuum bombs – which are banned under the Geneva Convention.

‘At every step of the way, Russia has betrayed the United Nations. Russia’s actions go against everything this body stands for.’

Wednesday marked the seventh day of fighting in Ukraine.

Russia has yet to achieve a breakthrough against Ukrainian forces and faces an unprecedented backlash from the West. 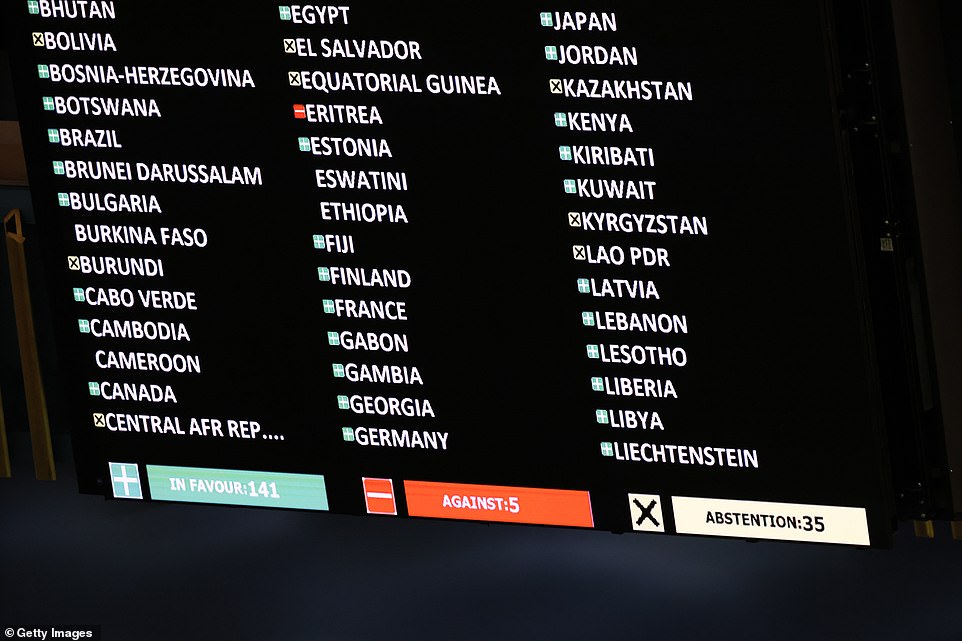 A UN General Assembly resolution demanding the withdrawal of Russian forces from Ukraine passed by 141 votes to five on Wednesday. Belarus, Eritrea, North Korea and Syria voted with Russia against the resolution

The general assembly session began on Monday, when it heard an impassioned plea from the Ukrainian ambassador.

Sergiy Kyslytsya read out what he said were the final text messages from a Russian soldier to his mother – describing his horror at the unfolding war before he was killed.

‘Mom I’m no longer in Crimea,’ they began. ‘I’m not in training sessions.’

His mother asks: ‘Where are you then? Papa is asking whether I can send you a parcel.’

‘What kind of a parcel mama can you send me,’ he responds

‘What are you talking about? What happened?’

‘Mama, I’m in Ukraine,’ he responds, before describing the horror unfolding.

‘There is a real war raging here. I’m afraid. We are bombing all of the cities together, even targeting civilians.

‘We were told that they would welcome us and they are falling under our armored vehicles, throwing themselves under the wheels and not allowing us to pass.

‘They call us fascists. Mama. This is so hard.’