‘Thousands’ of well-wishers are expected to descend on the Royal palaces this afternoon to pay their respects despite the Duke of Edinburgh’s funeral taking place at St George’s Chapel in Windsor, one officer told MailOnline.

So far this morning pleas by Buckingham Palace to the public to stay away from Windsor appear to have been respected.

All roads around the Palace have been closed off with dozens of police, some of them armed, on duty.

Private security guards have also been placed outside Buckingham Palace with police officers patrolling surrounding parks and a police helicopter hovering above.

Security, police and the media currently vastly outnumber the public in the Long Walk and in the streets around the castle. Trains into Windsor from Waterloo and Paddington are empty. 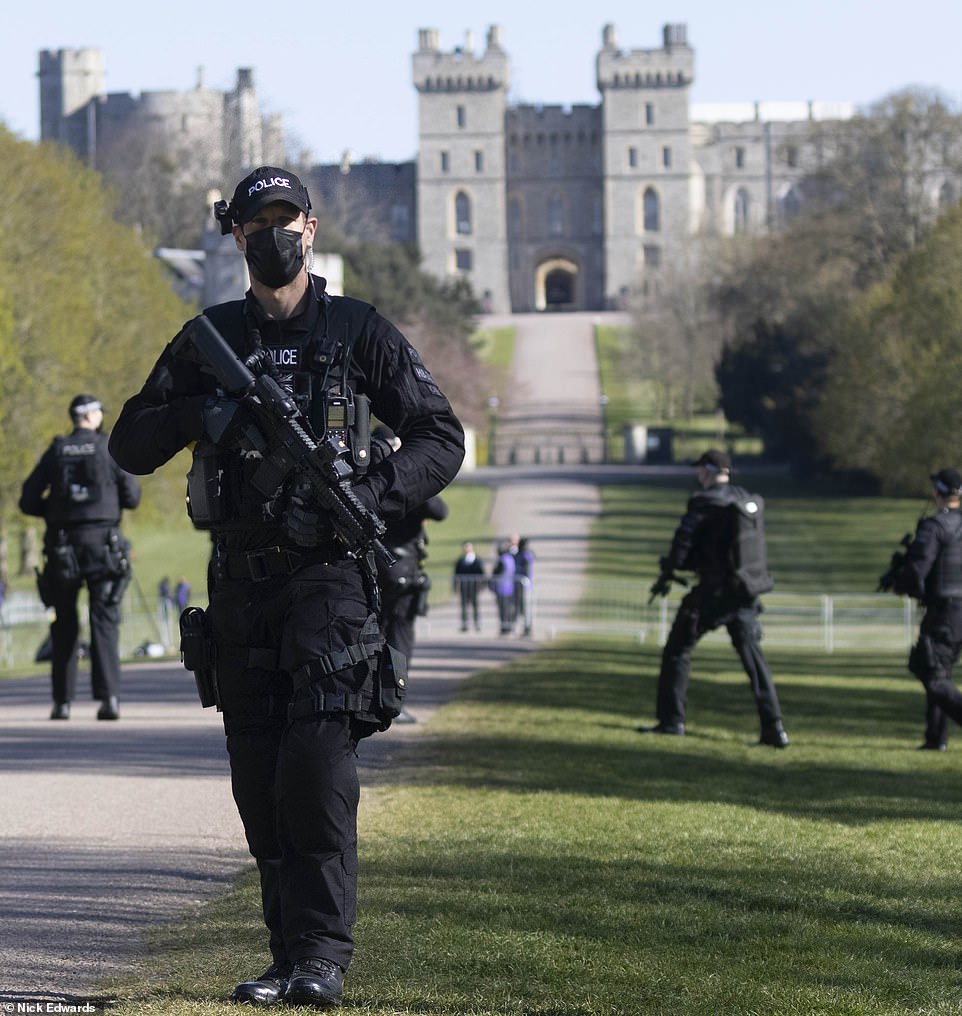 ‘Thousands’ of well-wishers are expected to descend on the Royal palaces this afternoon to pay their respects despite the Duke of Edinburgh’s funeral taking place at St George’s Chapel in Windsor, one officer told MailOnline. Pictured, armed officers gather outside Windsor Castle

A member of the station staff said: ‘Whenever there is a Royal occasion here, you get people sleeping overnight and certainly by 9am every train is packed.

‘Today there hasn’t been a single person who has passed through here to stand outside the castle.

‘I saw on the TV news last night that people were being asked not to come and it looks like it is working.’

Bored security guards in Windsor have been pictured standing in groups of 16 as they chat in the sunshine with instructions to ask any gathering groups to keep moving due to Covid restrictions.

A police sergeant told MailOnline: ‘It certainly looks like the royal family and Prince Phillip have been given the upmost respect.

‘Its 9am and I haven’t talked to one person who has come here to be at the castle today. I think people realise they’re better off at home watching the funeral on television.’

The service, which is expected to begin at 3pm after an eight-minute procession carried out by military regiments from the Royal Air Force, Army and Navy, will be attended by members of the Prince’s close family.

On the Long Walk, where some of the pageantry will march before entering the castle gates, steel barriers have been placed to fence any spectators in. 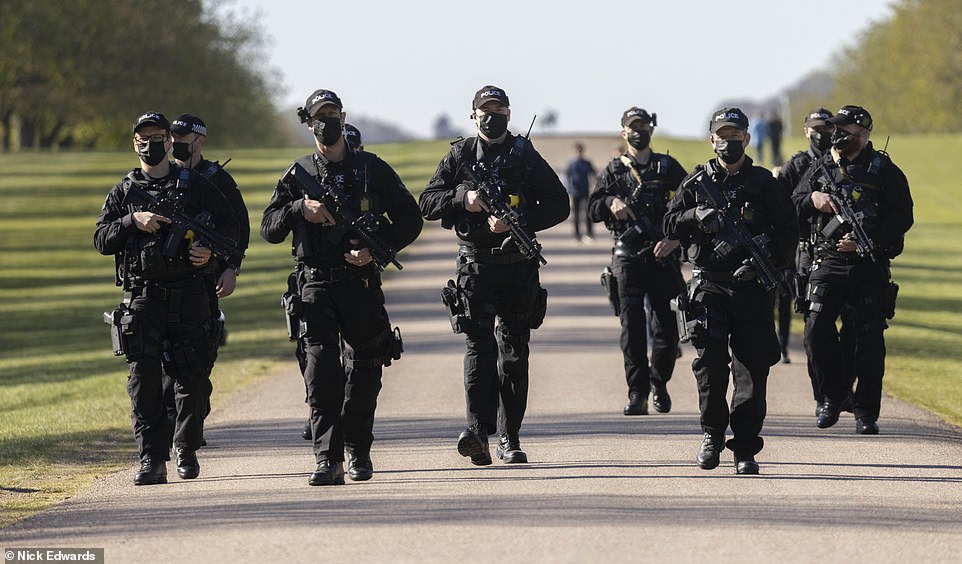 Alicia Evans, 48, from Windsor who was walking her dog there, was one of the few in the area.

She said: ‘If people are staying away then all I can say is good heavens for that. It’s a private funeral with only 30 Royal mourners. This is not one of those occasions where we want to see union flags and bunting.

‘It’s a very sad day and I hope most of the public remember Philip at home in their thoughts and watch the funeral on television.’

Despite the absence of spectators, security was on high-alert, with police snipers placed on roof tops and armed officers patrolling the streets.

Postboxes were sealed and rubbish bins were checked as part of the security ring.

One officer earlier told MailOnline they were expecting ‘thousands’ of people to arrive at other Royal palaces.

He added: ‘The funeral may be in Windsor but we’re expecting a lot of people to turn up at Buckingham Palace, as they have been through the week.

‘The sun is out and people have been very moved by Philip’s death. There’s lots of media here and we have to make sure things run smoothly because the eyes of the world are on us.’

Thames Valley Police has put a range of visible and covert security measures in place, including automated number plate checks, CCTV and barriers to prevent attacks using vehicles, as well as armed and mounted officers on patrol. 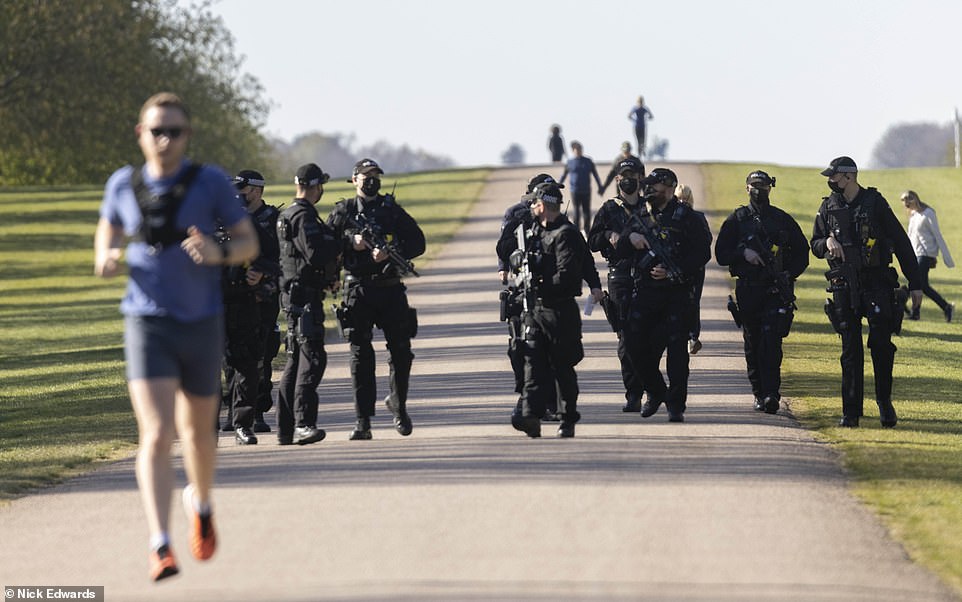 Despite the absence of spectators, security was on high-alert, with police snipers placed on roof tops and armed officers patrolling the streets. Postboxes were sealed and rubbish bins were checked as part of the security ring

Experts say GCHQ could even be listening in to ‘chatter’ around the world online and on phones, looking out for any spikes in conversations about the funeral.

The Government’s Rule Of Six puts police officers in a difficult position as they try to control the crowds and Royal fans have been told not to attend any part of the events that make up the funeral due to Covid restrictions.

They have also been asked not to lay flowers that could encourage crowds which may spread the coronavirus.

Buckingham Palace instead invited well-wishers to sign a book of condolences – but only online, to avoid crowds and queues.

Despite this, local florists opened early this morning as they braced themselves for a hectic day.

Florist Bridge Banks Harvey, 36, who was one of the first well wishers to arrive at Buckingham Palace this morning, said: ‘I’m opening up my shop early because I’m expecting a lot of customers. I came to the Palace to pay my respects before things get busy.’

She revealed her shop last week sold out of flowers as thousands of mourners left floral tributes to Prince Philip.

Ms Banks Harvey, who works at Pulbridge and Gould Florist in Victoria said: ‘People have been very moved by Philip’s death and want to remember him.’

Officers will be patrolling Buckingham Palace and Westminster for the Duke of Edinburgh’s funeral.

Police have asked the public not to gather by royal residences, to avoid meeting in large groups, to minimise travel and to make a donation to charity instead of laying floral tributes.

Patrols were also being carried out in Windsor town centre, the Long Walk and Home Park.

Those who did travel to Windsor Castle to lay tributes today were asked to remove any wrapping from flowers and warned they would be removed at the end of the day.

Among the people yesterday paying tribute was Professor Chris Imafidon, who met Phillip in 2003 when the Royal visited Queen Mary University in East London.

He said: ‘I was nervous about meeting him but he made me feel so relaxed straight away. I told him I was nervous because I was a foreigner and he was a member of the British Royal family.

‘I have come to pay my respects because he was such a wonderful person. He was all about education, emancipation, empowerment and equality. He will be missed by many, many people.’

Dance teacher Carole Hellewell, 60, from Farnham, said: ‘I was here on Sunday and it was very busy. I’ve put some flowers down then.

‘I’ve come back with my husband David because our friends in Canada and America asked us to lay some tribute for them too.

‘It’s a very, very sad time and I think Prince Philip’s death will be felt by millions all over the world.’

Publican Robert Gillespie, 62, who runs the Two Brewers Pub next to the castle, has decorated his establishment in red white and blue flowers to mark the Prince’s death.

He said: ‘I used to see him when he would drive his horse and carriage down here from the Royal Mees towards the Long Walk and he would always give me a wave.

‘I’ll be closing the pub tomorrow or the day of his funeral also to pay respects to him.’

Only a small number of guests will attend the service later today, with even the Prime Minister stepping aside to make way for an additional family member under the tight rules on numbers.

Funerals of senior royals are years in the planning, with each operation named after a different bridge. The Queen is thought to be London Bridge and the duke is Forth Bridge.

The security operation will focus on preventing risks and ’embarrassment’, particularly controlling unauthorised access to the castle.

But police and security services will be alert to any incidents that could prevent a threat – from accidents, public disorder and crime to terrorist attacks.

The potential for knife attacks, shootings and the ability to plant bombs will all be considered.

But officers may be particularly ‘alive’ to threats drones could pose in disrupting or attacking the ceremony and can draw on technology to try to scupper their flight path or even call in the military.

Richard Aitch, director of operations for firm Mobius International, which offers security services for governments and private companies, said there could be a focus on covert tactics to avoid overshadowing the sombre mood of the day.

He believes that even in a pandemic, the security operation for an event like this would be ‘huge’, with the cost running ‘into the millions’.