Shocking footage has emerged of a police officer being beaten and robbed of his pocket radio during a horrific attack by a gang of thugs.

Police were called to reports of a disturbance involving a group of men on a street in Bradford, West Yorkshire, when one of the officers was suddenly set upon by the mob at around 5.54pm yesterday.

Footage shows members of the gang punch the officer in the face and lunge at him as he attempts to defend himself.

The officer is pushed onto the grass and tries to retrieve his equipment as the mob circle him menacingly.

The ring leader is heard shouting ‘little b****’ as the officer lies on the ground.

A female officer soon comes to her colleague’s aid as the mob continue to surround him and shouts: ‘Get off him!’ 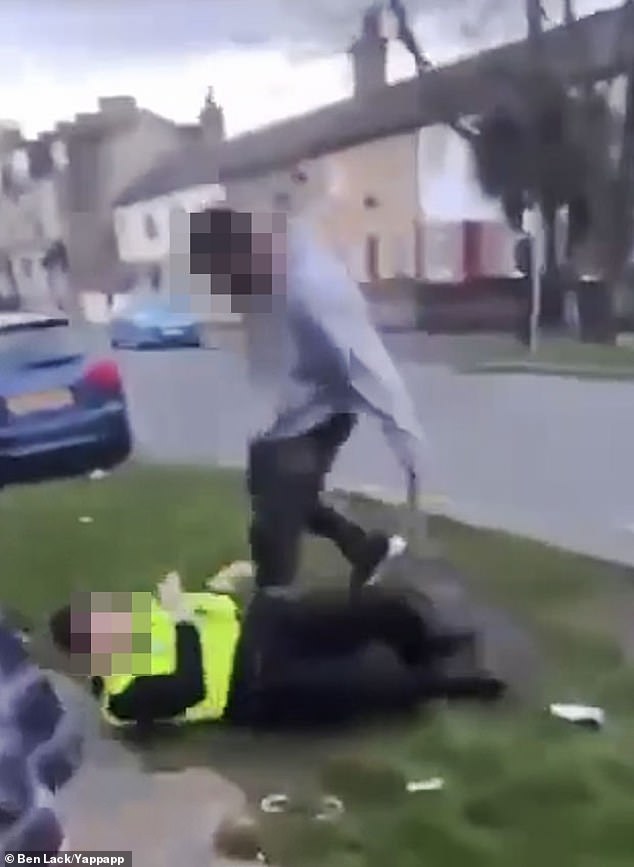 Police were called to reports of a disturbance involving a group of men on a street in Bradford, West Yorkshire

Just moments later, a member of the gang films themselves holding the officer’s pocket radio and boasts about ‘violating the coppers’.

The thug says: ‘We violate the coppers. We take their radios. You get me?’

West Yorkshire Police said two officers were assaulted during the incident and required treatment in hospital.

Four men have been arrested and one has been charged with offences relating to the incident.

A West Yorkshire Police spokesperson said: ‘Police are aware of a video circulating on social media of an officer being assaulted in Bradford.

‘At 5.54pm yesterday, officers were called to St Leonard’s Road, Girlington, following a report of a disturbance involving a large group of individuals.

‘Whilst in attendance, two officers were assaulted, sustaining injuries that required hospital treatment. 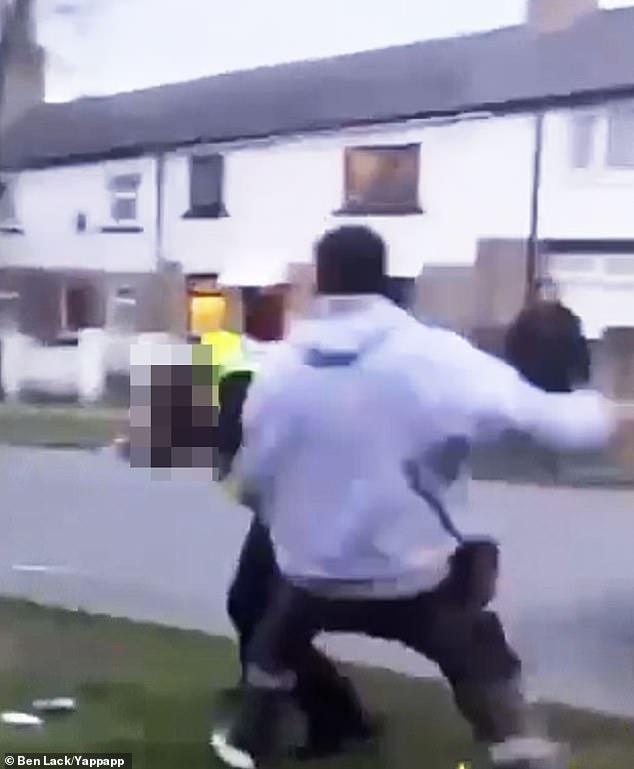 ‘Four men were arrested, and one has now been charged with offences relating to the incident and has been bailed to appear in court later this month.

‘Appropriate support has been put in place with regard to the welfare of the officers assaulted, and additional high visibility patrols are in the area to provide reassurance to local residents.’

Chief Inspector Bash Anwar, of Bradford District Police, said: ‘West Yorkshire Police condemns any violence towards its staff and all such incidents will be investigated thoroughly.

‘We will seek to prosecute anyone who displays violence towards an emergency worker as they work to protect the public and keep our communities safe.’